It was a nice day for all of us since morning. We were tired after a long road journey but were equally interested to explore the places in whatever time we have in our hand. We were also aware of the fact that we have just two days in our hand. However, the time in between was just a perfect match wherein the mind & body decided to wander around.

And why we shouldn’t? For people like us, who born and brought up in the plain, never want to miss the opportunity to explore the absolute green, verdant forests so close to Himalayas. It’s not always that we get such opportunity.

We got up early and the view from the window was just wonderful. We planned to have our breakfast inside the Hotel and leave for Jageshwar by 8 in the morning. However, our plan to leave early was delayed by more than an hour since the breakfast was served only after 8:30.  Meanwhile, I checked the route from a driver who was waiting for his guests staying at the hotel. 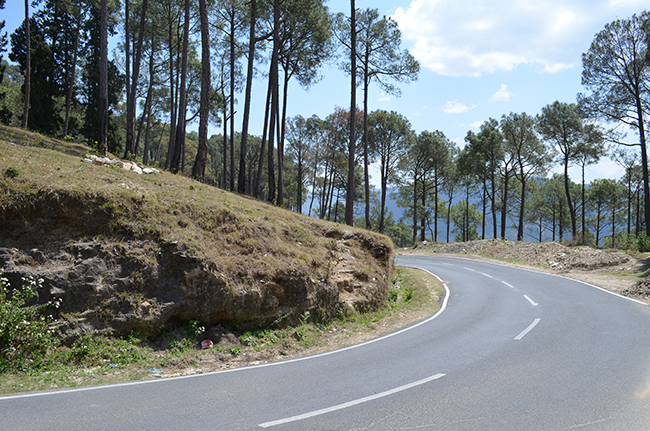 We left the hotel by 9. The lake looks stunning in the morning and the place looks so peaceful. We stopped for a few minutes and moved on towards Tallital side. When you are coming from Mallital side, you need to take a left turn towards Almora from the roundabout and right to Kathgodam. I was excited to see a new place, as well as to drive in the hills. This would be my first long driving experience in the hills where I would be covering ~ 200 km in a day and I had no idea about the road.

Few of my friends belong to Almora.  They used to share their life in the hills and we wanted to visit their villages. We planned many a times but it never materialized for me. All of their names flashed in my mind all of a sudden, as I saw the signboard indicating Almora 65 KM. 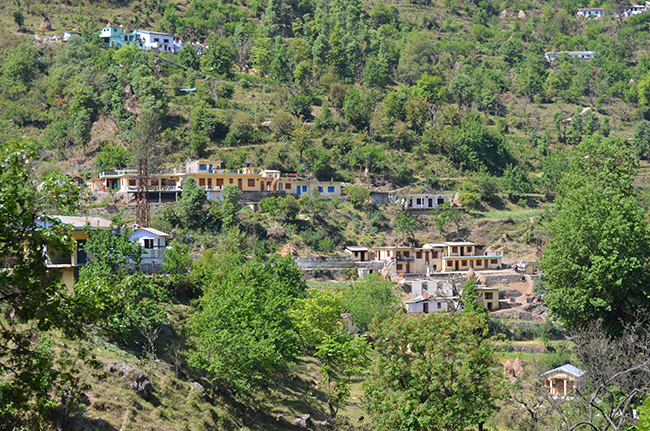 One village on our way 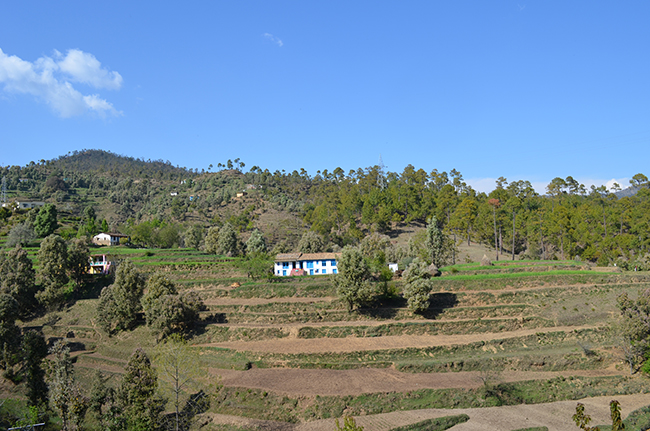 One village on the way

Uttarakhand, or the ‘Devbhoomi’, the land of Gods,  due to the many holy Hindu temples and pilgrimage centers found throughout the state, is mainly known for its natural beauty of the Himalayas. The state has divided into two divisions i.e. Garhwal & Kumaon.  Kumaon belt is greener than Garhwal, perhaps more soothing to the eye. But, I love the entire Uttarakhand. 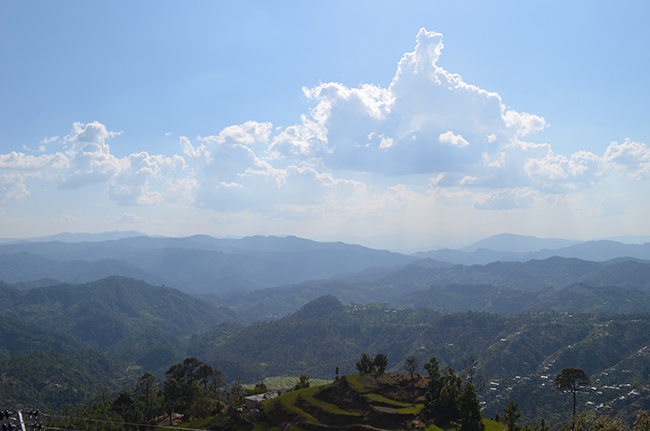 Romancing with the Kumaon Hills 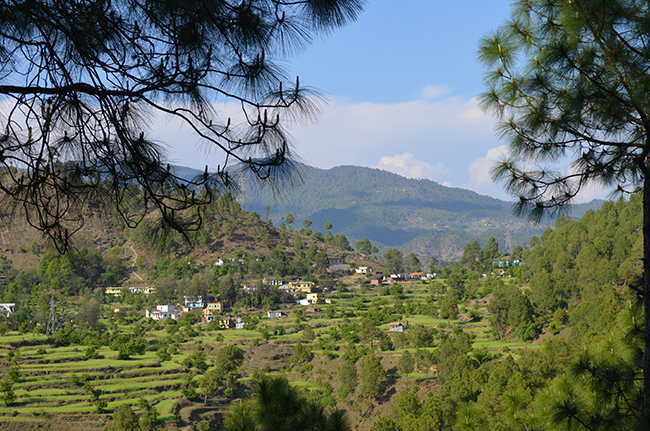 Fall in love with Kumaon Hills

The Kumaon hills have a timeless beauty and an eloquent grandeur. The serenity and panoramic beauty of Kumaon hills will spellbind you and, of course, we were not from the mars. We were completely mesmerized. The hills of Kumaon are more seductive, with their undulating landscape well covered with trees reaching towards heaven.

The road is excellent and the view is terrific. This hill belt is a photographer’s delight. We forgot about our destination completely. At every turn and at every corner, there is something waiting for you to discover. I would like to know whether this happened to us only or it happens to everyone who is frequently traveling to hills. 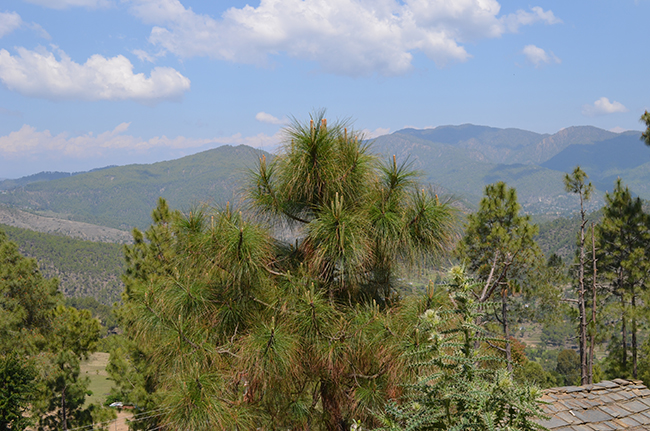 Views from the car 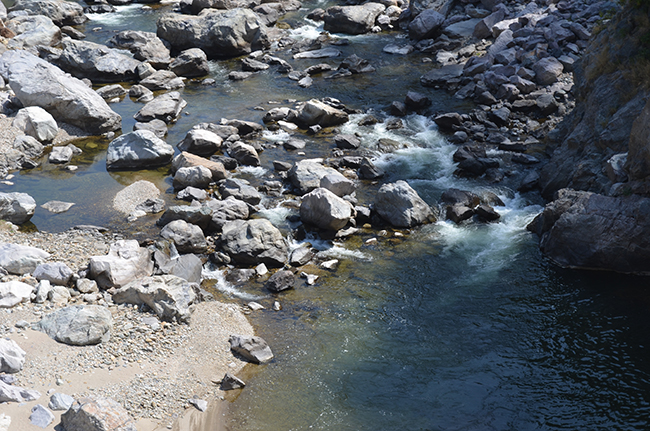 Streams on our way

We passed through small hamlets on our way, though didn’t remember their names right now and stopped at several places to capture the view in our camera. We also saw many shops selling ‘Bal Mithai’. Bal Mithai is a brown chocolate-like fudge, made with roasted khoya, coated with white sugar balls. It is a popular sweet, especially around  Almora belt. We decided to buy the sweet while returning.

It is a straight road from Nainital till a few KM from Almora. There are probably two roads to reach Jageshwar from Nainital, one through the Almora city or bus stand and the second one just a few KM before reaching Almora, you need to take a right. Jageshwar is ~ 35 Km from there. For the first time after so many years, I was not feeling comfortable in driver’s seat. I wanted to enjoy the surroundings and didn’t want to concentrate on the wheel; otherwise, I would have provided correct information about the route. It was 12:30 p.m. and we decided to have a darshan at the temple and then have lunch over there. 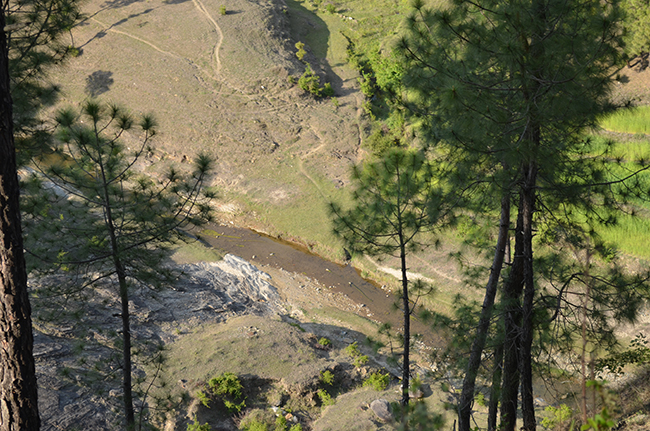 We were on the same route which pilgrims used to pass en route to Kailash and Mansarovar once upon a time. As we were approaching towards Jageshwar, we wanted to travel in our dream to many many years back when Lord Shiva came to meditate here. When all the women of the village came to know of this, they immediately left their household chores to have his darshan. However, men of the village were infuriated and came to see who this sadhu who has captivated their women is. Seeing the commotion, Shiva took the form of a child, which is why he is still worshiped in his child form here. 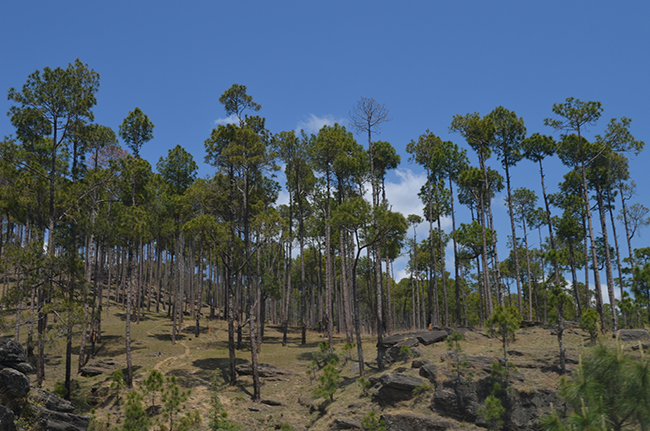 Finally, around 1:15 p.m., we left the highway (towards Pithoragarh, 88 km from there) and took a left turn towards the temple complex, which is 3 Km from there. We were welcomed by the tall deodar and pine forests. We felt refreshed almost immediately with lovely smell and coupled with the crisp mountain air.  It left a long lasting impression in our mind. We really want to believe that some of the trees must have also been there when the Lord of the Lords came here to meditate and makes the place divinely scenic. 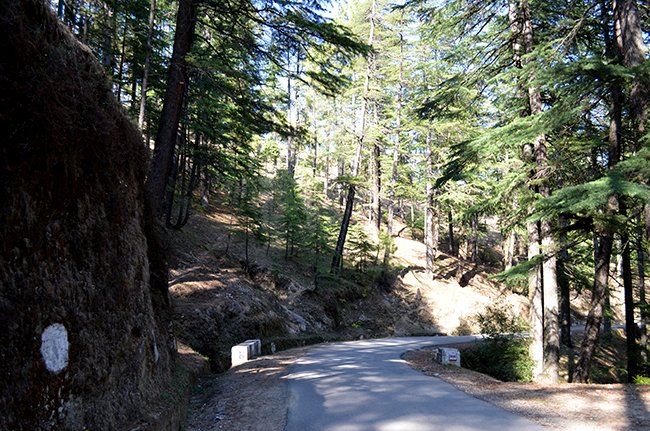 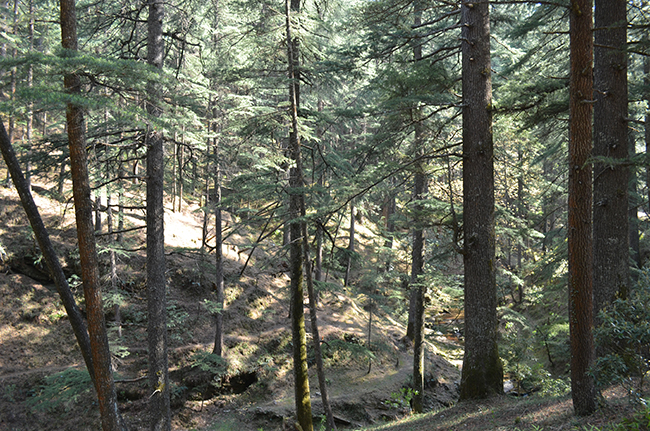 We parked our car, in the parking complex and went to the temple. There are around 125 temples of various shapes and sizes ranging between 7th century A.D. t0 18th Century A.D. These temples are dedicated to Lord Shiv and Goddess Named Yogeshwar (Jageshwar), Mritunjaya, Navdurga, Surya, Navgraha, Kedareshwar, Baleshwar and others as well. 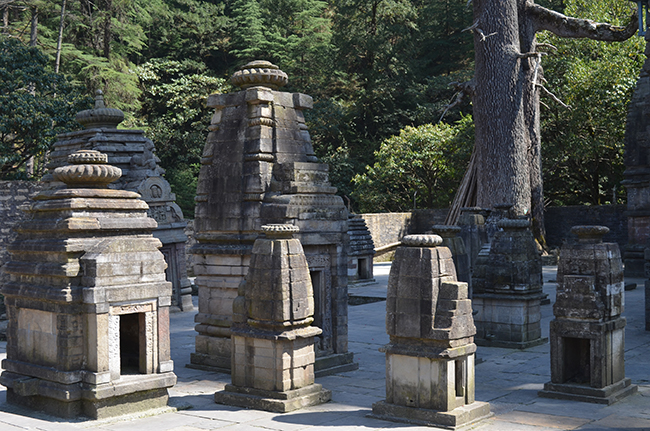 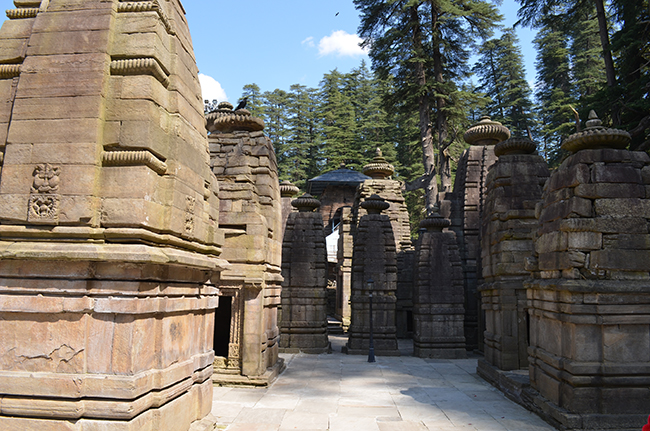 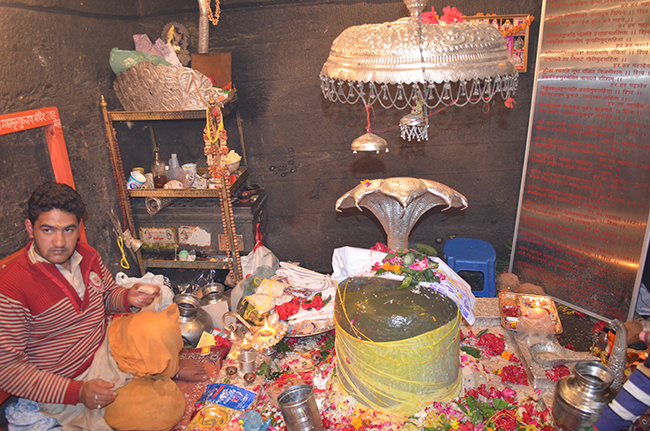 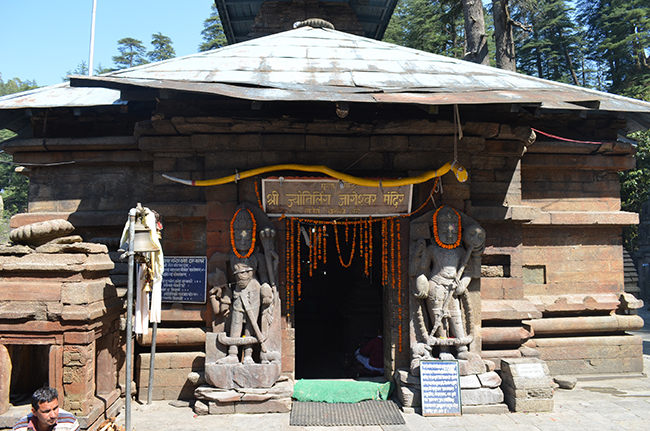 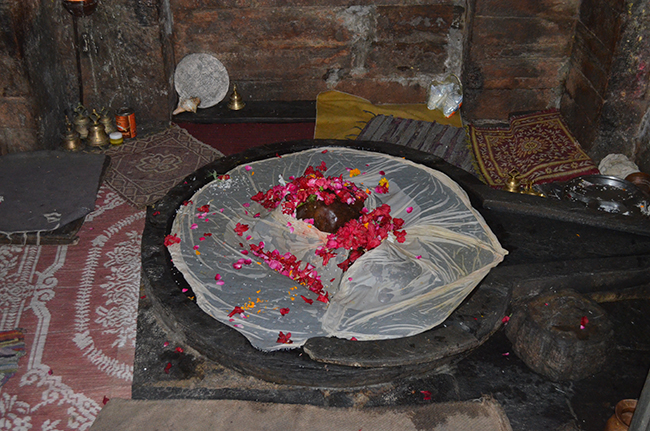 We came out from the temple after 2 hours and went to lunch. The food is very simple but tasty. People are very friendly and like all hills, very very polite. In the morning while driving, I received a mail from the editor of this wonderful forum, however, couldn’t read it properly. Though, I was delighted to read the message, I was equally surprised and nervous. My reply to Archana with a ‘thank you’ note while having our lunch, showed my nervousness and an assurance and encouragement from Nandan was a great relief finally.  Thank you all.

We were happy about our last night’s decision to come here. It was not in our plan but most probably, we were destined to be there on Saturday, the 30th March, 2013, even if for few hours only. There is a museum and some other temples, which we missed. I heard about Binsar, which you can trek from there and some other beautiful valley. Had we not booked our hotel for tonight at Nainital, we would have loved to spend one night over there and walk in the Deodar and Pine forests or soft treks in the mountains and through local Kumaoni villages and ancient temples in the morning. This place will surely be in my dream for many many years from now and I may come back few more times. 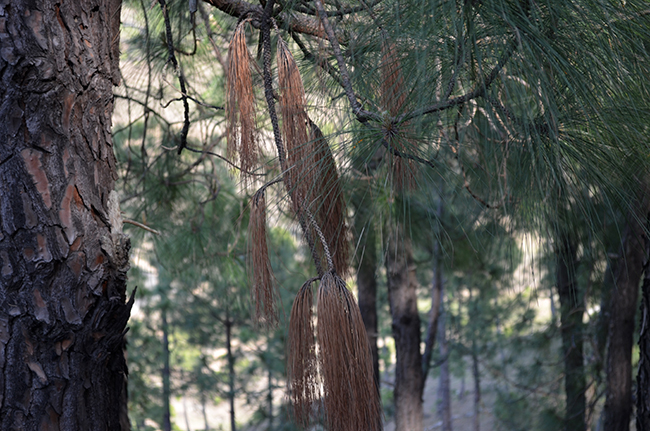 Returning to Nainital was also the same story.  However, by the time we reached Almora, it was almost dark and finally we reached Nainital around 8:30. The distance from Nainital is exactly 100 Km and it shouldn’t take 3 Hours, since the road is good. However, if you want to enjoy the scenic beauty which the Kumaon Hills offer, it may take few extra hours as well. If you are traveling to Jageshwar, plan to spend one night over there and I am sure you would love it. 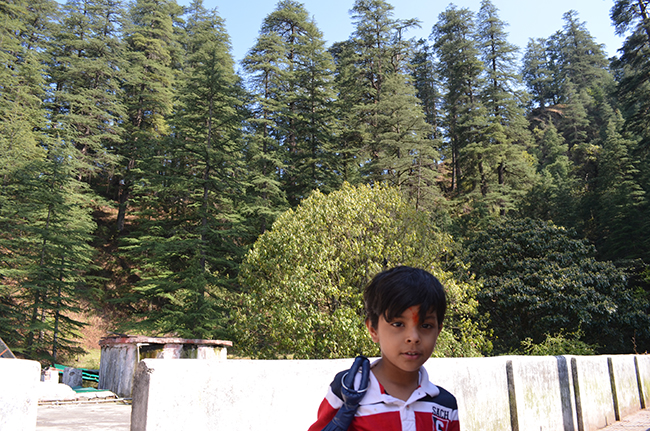 Romancing with the Kumaon hills to Jageshwar – III was last modified: July 15th, 2022 by Amitava Chatterjee

Our first day of New Year began with the traveling to Dehradun. As Dehradun is our home town,most part of our vacations are spent…