Day – 9 started with my kids enjoying themselves with their color pens & crayons. Both are artistic and they show cased their art works which they were
working so hard last couple of days. Children always express themselves so nicely and they can explain what they have drawn. 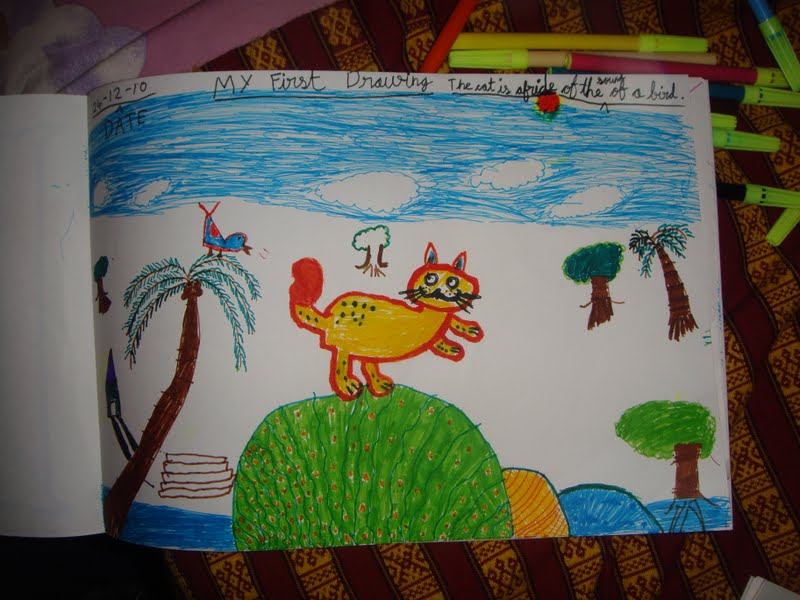 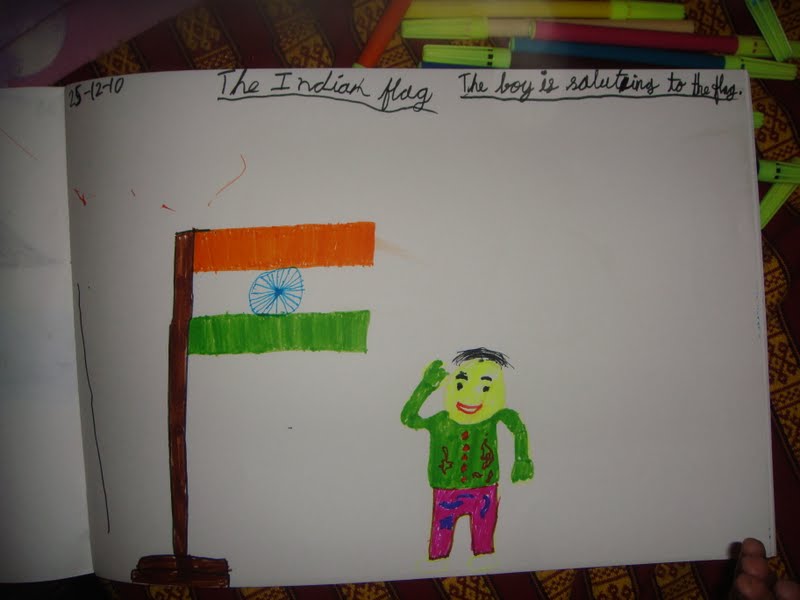 Baby Shri Meenakshi is all ready in the morning and was wearing the famous Pattu Pavadai dress (all silk) she likes very much and posed. She hated the white thermal wear but we insisted that she has to wear it. 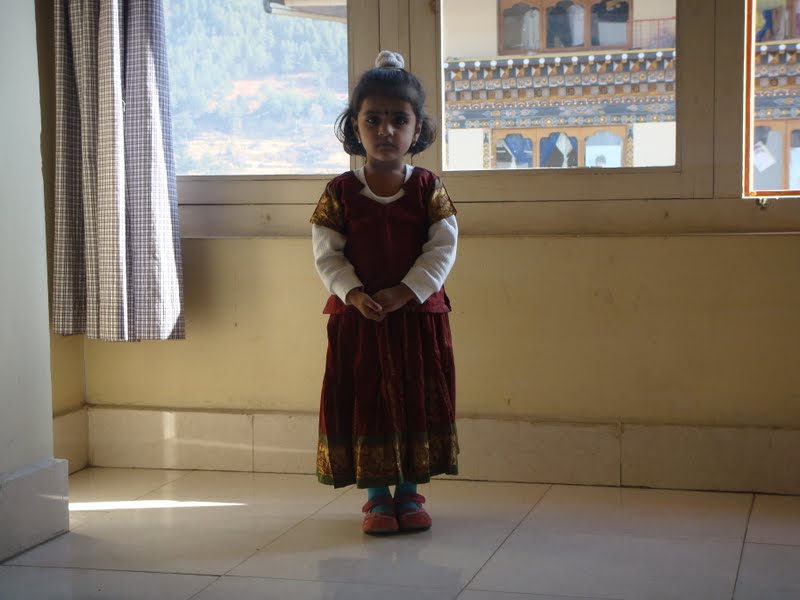 I don't want to wear the white thermal wear :(

By 11 A.M. we were on our way to visit Dochu La Pass & Punaka & Wangdu. These places are really very beautiful to visit.When we were on our way to Dochu La Pass we were so engrossed in the natural beauty & greenary. We were following a local Bhutanese diesel car that was spewing heavy smoke. I was telling my wife that this car owner / driver really needs to take care of his car as I could not see anything. 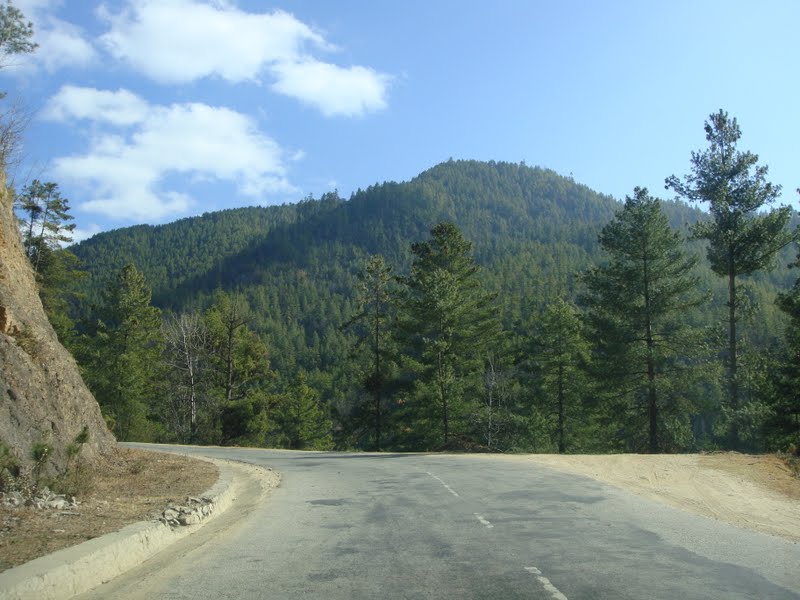 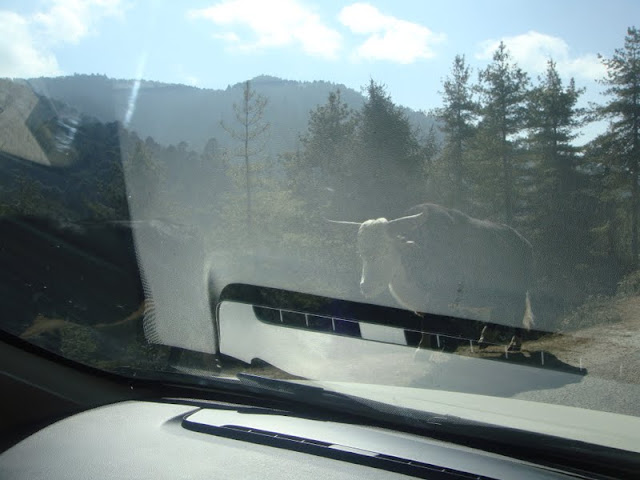 In fact that’s what happened. We just missed stopping at a check post that was open & drove on without stopping due to the distraction of the smoke and also as the local car went through I too never realised that there was a check post.Without our knowing we were followed by a Police Officer in his 2 wheeler all the way from the check post to the Dochu La Pass about 5 KMs.He came to us directly and asked me to show the papers and checked the permits & asked me for the personal permits and checked. He then said we had to return back with him to that check post which was some 5 km back. He said we had broken a law since he had taken my permit paper with him I had no option but to follow him.

We met him at his office and he asked us why we did not stop. I told him the truth that we were right behind a local car & due to the heavy smoke on this hill I could not notice the check post that was open & missed to stop.Initially he did not accept & then I told him I am aware that I am supposed to stop at all these check posts as I had visited Paro previous day.He asked us where we were coming from & whether this was our first time to Bhutan. I opened the Indian map & showed him the bottom most part of Indian State & showed him Coimbatore & told him that’s where we came from.He was surprised & asked you have come all the way from there to here? I told him yes & I had 2 small kids & a wife and we are law-abiding citizens and I follow traffic rules and it was not intentional that we did not stop.I accepted that it was my mistake & I told him I leave it in his better judgement to decide what to do with us.

He saw me with my daughter and realized that I was speaking the truth and said if it was some one else he would have put an official fine but since he too had seen that I had actually driven behind the smokey car he believed me as he had immediately started right behind us.He told me to be more careful at all check posts & also told me that car was a local one & did not stop.He did not take any money, he did not put any fine which he could have if he wanted to, he also never asked for any bribe money which I would not have paid, these cops are decent & honest & are doing their job.It looks like all the corruption happening in their southern neighbouring country hasn’t yet affected these people. Hope they stay honest for many more years and don’t get corrupted by their southern neighbours.I sincerely thanked him & he shook hands with me & wished me luck & drive safe. Whew that was close!!!Finally we were back at Dochu La Pass & it was a sight worth seeing. Amazing place. The time was 11.56 A.M. 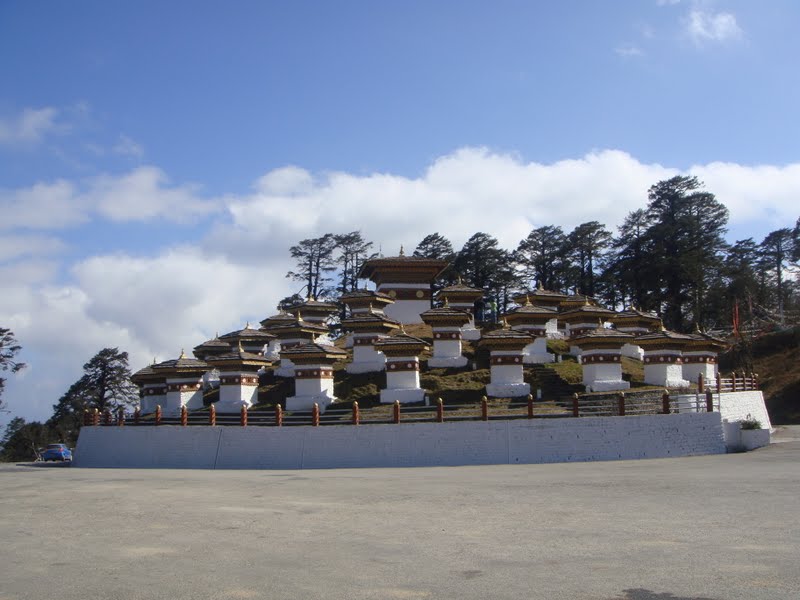 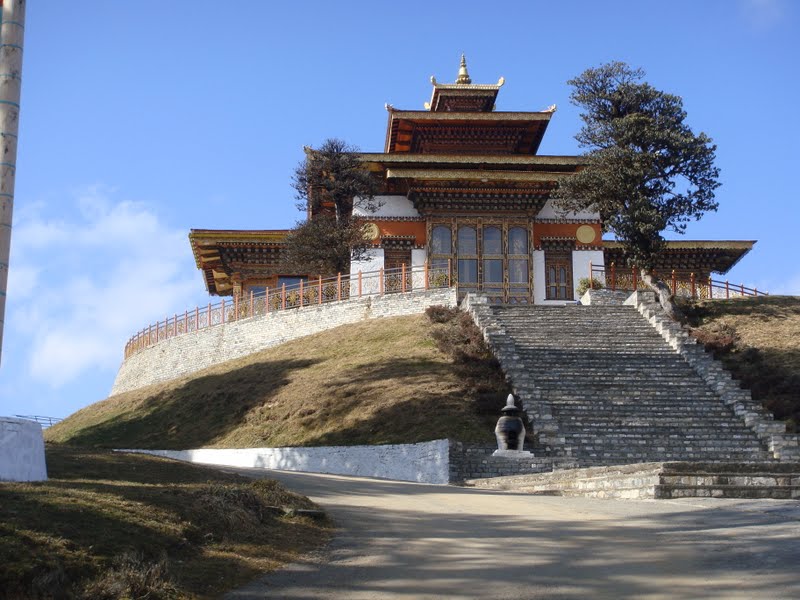 The view of the surrounding hills & greneray is so mesmerizing and it is a sight worth seeing. We climbed the steps of the Dochu La Pass and went up the hillock & had a great view.The 108 Chortens at the Dochu la pass gives the visitor the sheer beauty of the fresh and high altitude vegetation around.After visiting Dochu La we were on our way to visit Punaka & Wangdu. 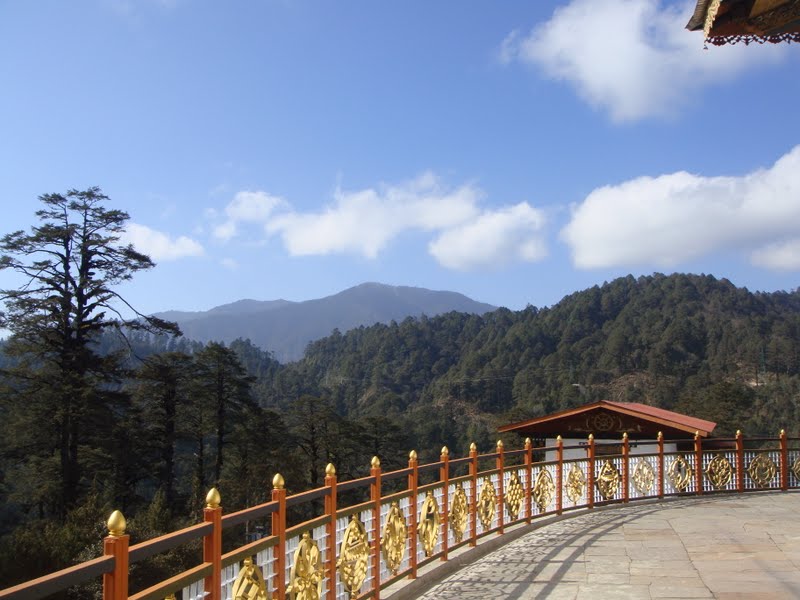 This place Punaka is just beautiful with a river flowing and this water is used for producing power. We missed visiting the Punaka Dzong.There is a Hydro Electric Power Project going here with a join venture between Bhutan & India.After visiting Punaka we were on our way to visit the Buddhist Monastery at Wangdu & here it is called Wangdue Phodrang Dzong.We have to stop at this check post and enter all relevant details. Keep photo copies of your driver’s license and permit papers always handy.We saw a lot of these tiny sparrows and my kids were so happy to see these birds we call them Chittu Kuruvi. 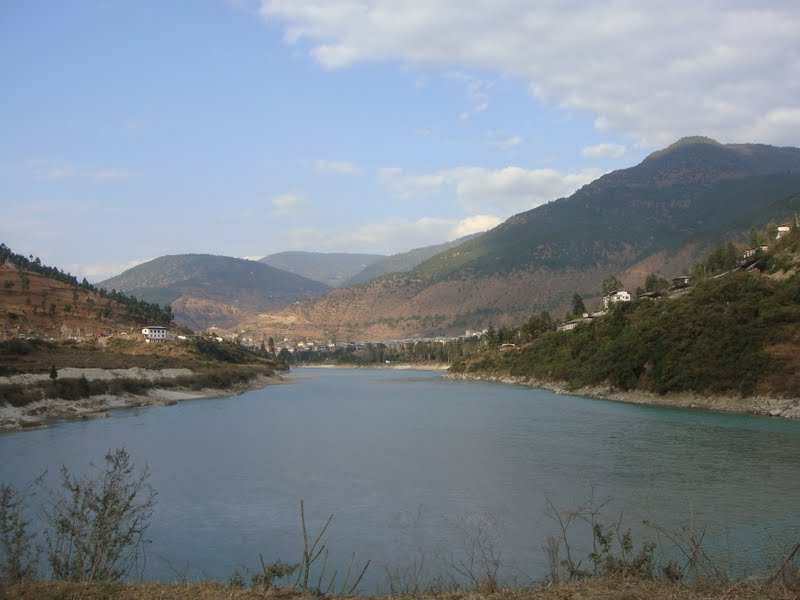 Unpolluted Waters of the Beautiful River 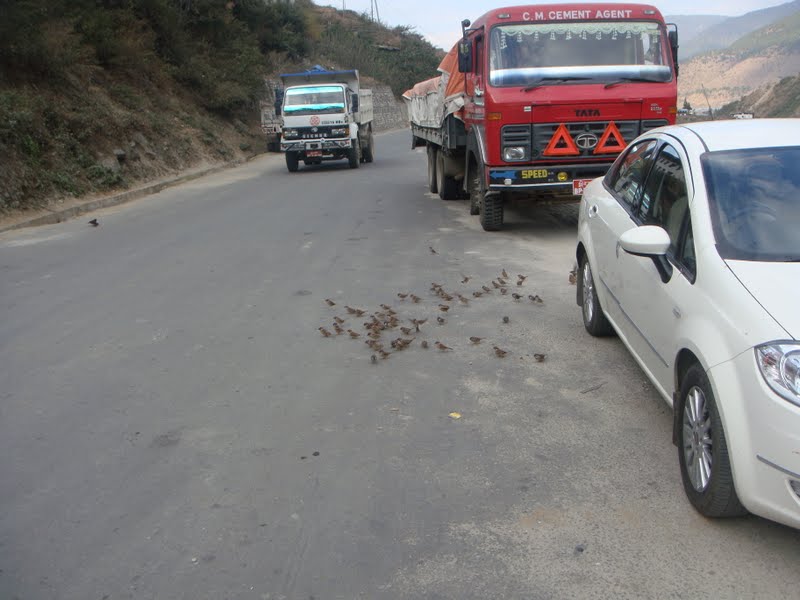 The scenery here is very beautiful and calms your mind. So much of fresh, clean & clear unpolluted water flowing in this river. The famous Wangdu Dsong we went inside and a security guard took us for a complete tour of the place.After finishing visiting Wangdu Dzong we returned back again passing through Punaka and Dochu La.It was becoming dark & very cold by the time we returned back to the Hotel by 8 P.M. Night. The next day was our last day in Bhutan & we had to leave in the morning from Thimphu to Siliguri. 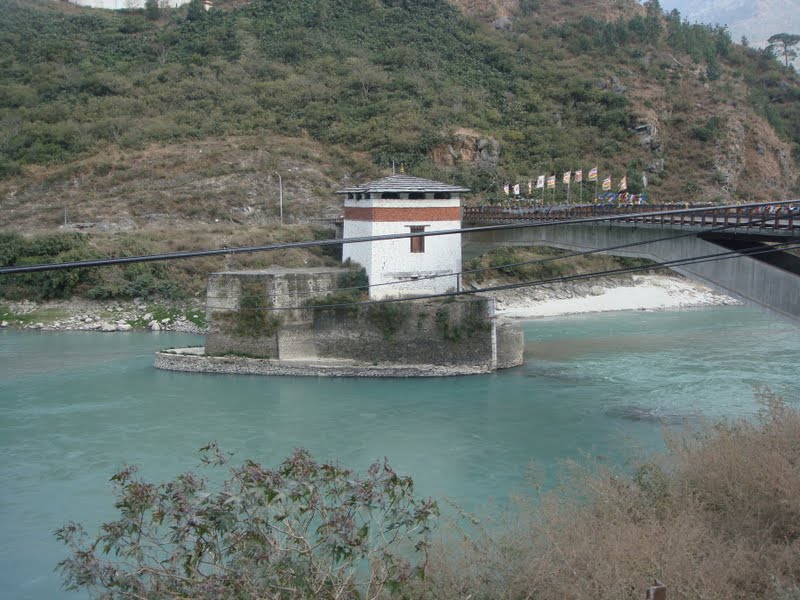 Beautiful Bridge Across the River

The Land of the Thunder Dragon (BHUTAN) – Day 9 was last modified: August 22nd, 2020 by Mahesh Natarajan