The vibrant, lively city of Newcastle in the North-East of England is as friendly and charming as its residents, the Geordies. Swarming with students year after year, Newcastle has earned and maintained its reputation as the best party city in the UK. And this was the place I was headed to for my post-graduation in September 2010, an MA in Creative Writing. Of course, I did not know all this back then. 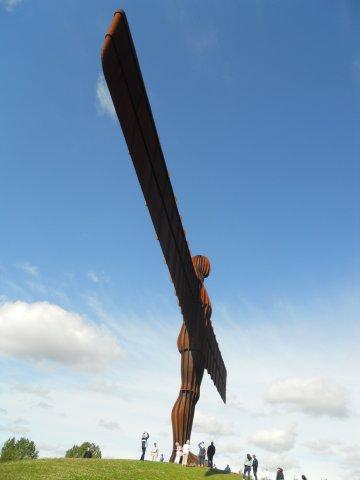 The Angel of the North

We found a huge seven bedroom, three-storied house and gradually started settling back into the student life. Initial few days were a bit overwhelming because of Geordie English, which is completely different from any other dialect of English we had ever heard. To get an idea of the difference, consider the phrase in the title. If a Geordie says that to you, don’t punch him in the face because he’s just offering to take you out for a drink in Newcastle. 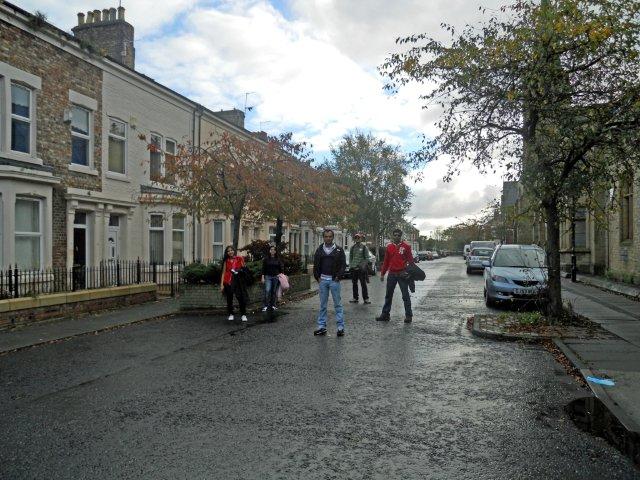 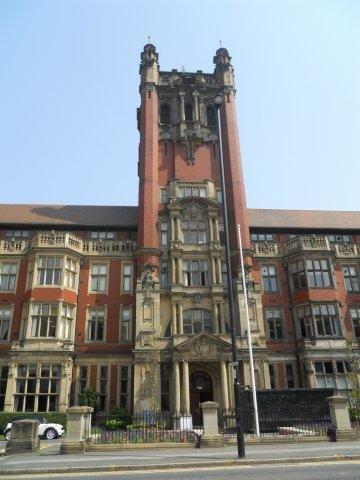 Armstrong Building in the Newcastle University

As time passed, I found a part-time job and, as a result, found myself traveling to the banks of the river Tyne almost every alternate day. The office was also at a walking distance from my house and the walk included passing through lush green parks and busy streets. My experience of Newcastle had begun and I had now started getting attached to this place. You cannot avoid it for too long. The city embraces you. 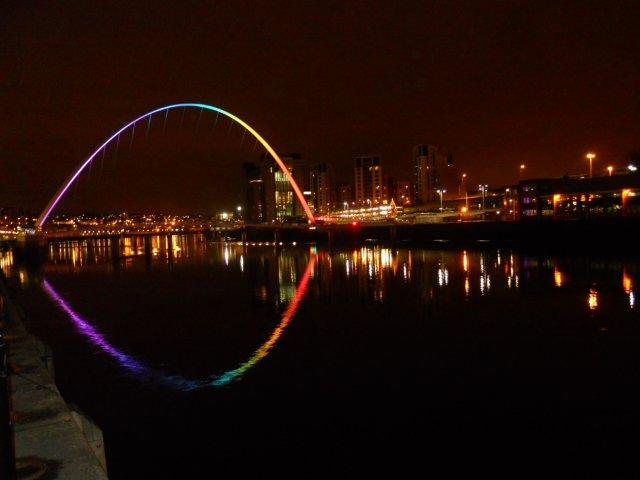 The Millenium Bridge on the River Tyne

Eager to show off its charm to the newcomers, winter soon made a grand entrance and we saw our first snow. Even the Geordies agreed that it had arrived too soon. We had deep snow every where and it took a while to get used to walk on the streets. Days were getting short. And at the peak of winters, it was dark till 8:00 AM and started becoming dark again at 3:00 PM. The nights were not too dark because snow reflected light and the sky for the first time in my memory was lit by a ghostly, white luminescence. We celebrated by making a snowman that made us famous in our colony. 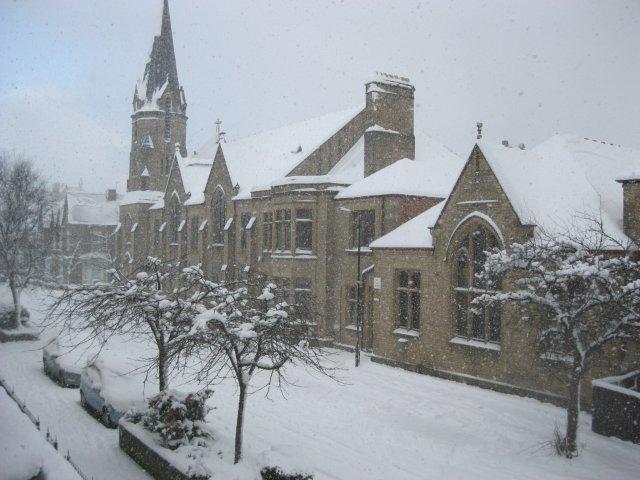 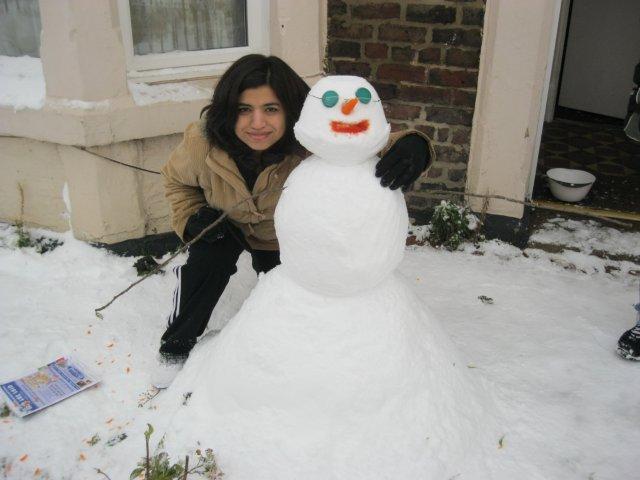 Me with the snow man

And it was also around this time that I made new friends in college and had my first experience of Newcastle Night Life. 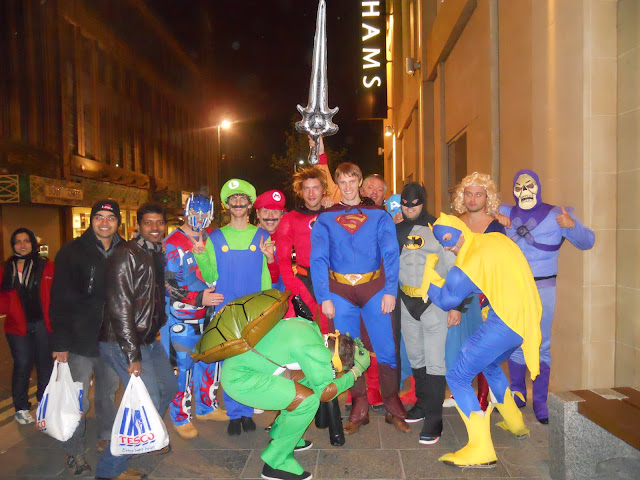 Soon we developed a routine. We had two classes on thursday, one from 11 – 1 in the afternoon and the other from 5-7 in the evening so we had 4 hours to kill. We’d have lunch at The Crows Nest and then roam around the Northumberland Street, famous for its shops and craziness, on the pretext of shopping for something urgent. Just before the class, we’d have coffee at Starbucks and then head back for the class. This schedule was followed religiously till the very end of the session in August 2011.

A Nun riding and playing a piano and, yes, singing songs too!

The winter was pretty at first but very soon we began to wish for the snow to be gone and for the howling North Wind to subside. And then little saplings started raising their heads as the last of the snow melted away, leaving behind glistening blades of grass and a very clean city. Very soon the entire landscape was transformed and bright yellow daffodils took over along with the delicate dandelions. The city came alive again with the songs of birds and the buzzing of bees. 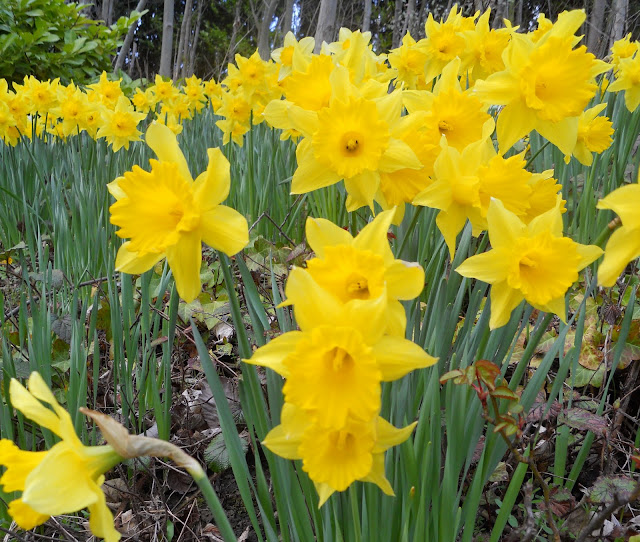 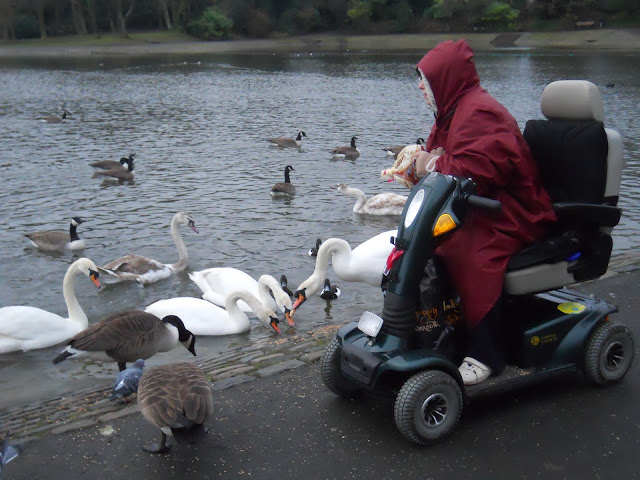 The daffodils were soon replaced by roses and bluebells. And the days became warmer and longer. At the peak of summer, the sky started becoming lighter as early as 2:30 AM and stayed light till 11:30 PM. Rains in Newcastle aren’t bound by seasons. Short spells were common in both winters and summers. Summers never meant sweat though. Even on the hottest days, we wore light cardigans.

Our studies were progressing and we were getting busier. Very soon the classes ended and we plunged into our dissertations. The summers slowly turned into autumn. The cherry tree in front of our house shed its leaves again. And the north winds returned with a vengeance. Seasons had come a full circle in Newcastle but the soul of the city had not changed at all during the entire cycle. Parties continued irrespective of whether the world was freezing or melting.

Amongst all activities, soon it was time to submit the dissertation and to say good-bye to friends and to Newcastle. To this day, I don’t know who I miss the most, my friends or the charming city where I happened to meet them. This is by no means the last post about Newcastle. It is just an overview. Soon we’ll look at various aspects of this city in details. Till then…

Thanks a lot to all for reading the trip with special thanks to Nandan, for taking me on board. And guessing that the response…