I am starting this entry from Labuan Bajo, a small town in West Flores, an hour and half flying distance away from Bali. I was here because I wanted to see the Komodo Dragons. When I boarded the ancient 30-seater plane at Bali, it did occur to me that for a holiday, I was seeking thrill more than relaxation, but then I guess, adrenaline shots helped me relax and I had been dreaming of dragons for a while. 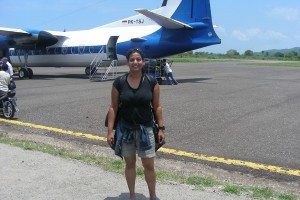 For a USD 400 I had managed to book myself the Komodo Island tour, but being a single traveler meant I would have to share the trip with a group of strangers. I was OK with it, seeing that I had no other choice anyway. Instinctively I knew this would be one of those trips that would involve more smiles and gestures than any real talking, unless I was really lucky and got a group of people who spoke my tongue.

When I landed at Labuan Bajo, after a scary, yet uneventful flight, I was sure I had made the right decision. For one, I had a nice video shots of small islands dotting the sea (the planes dont fly very high and if the weather holds on a clear day, with a really good cam, you can shoot clear pictures of the islands).

Thrity people descended from the aircraft, claimed their baggage that was deposited in the cockpit (!!) and I wasnt surpised to note that I was the only Indian (leave alone being an Indian Female) amongst the other pleasure seekers that included Latvians, Poles, Russians, British and Germans. My first picture (the one you see here) was shot by a Pole, traveling in a group of two, and visiting Labuan Bajo for the dragons and the dive.

The airport deserves a mention. This was the smallest airport I have seen, and also the most convenient one. No standing in queues, no security checks, no waiting to claim to baggage…just walk through the single big hall and out into the arms of your guide waiting to escort you (if you have booked a tour. If it is the first time, it is advisable to book in advance, lodging options are limited in this tiny town and is always full, according to what my guide Mathias told me later).

It was then I met my co-travelers for the Komodo Island trip. Four Latvians.
Red-faced Amanda with her parents and a friend named Peteris. (Over the next two days of gruelling boat ride in the sea, I only managed to share not more than a couple of sentences with Amanda, very little with Peteris and none at all with Amanda’s parents, who didnt speak English).

Past the lovely green countryside, we bumped over narrow roads to arrive at the port, where our fishing boat-turned-house boat stood. We stopped briefly at the tourism office (yes, there is such a thing as a tourism office here, a smallish room with few maps, a table, no chair for visitors to sit down and some brochures advertising diving/snorkeling trips). I suppose people didnt stop by too long at the tourism office, and if they did stop at all, it was only to seek directions or get information about hiring diving gear.

After the customary stop, we headed to the Port. I remembered later that I should have had the good sense to pack snaks for the trip, but seeing that it was a all-paid trip including food/board-on-boat package, I decided against this, determined to survive on what was given. If there was nothing, I would do with nothing. I wasnt on a luxury liner nor did I care that I would have to eat food cooked on kerosene stoves on the boat.

The journey had begun.

The journey was last modified: November 4th, 2019 by Anjaly Thomas

My trip to Mussoorie happened by chance. A friend of mine wanted to attend her school reunion. She studied in a boarding school in…