Since quite long it has been going through my mind, how to cover two of the existing heavens in the world:

Many people consider Leh Ladakh as one of the most beautiful places in earth, but then a minor portion of the population who have been to Lahaul and Spiti also have the opinion that Spiti Valley is also equally comparable and beautiful. But just because Spiti Valley is very dangerous, not many tourists visit it as compared to Ladakh. Well, leaving apart comparison, finally getting an opportunity with a 1 week leave, I decided to first cover Lahaul and Spiti though and after covering the entire circuit of Himachal (which will be mainly my post here), It became eminent that heaven does actually exist in Earth. We just need to explore and find it. I actually could not believe anything more beautiful than this that can exist in earth.
Although I wanted to self drive, my friends who have been to Spiti valley before suggested me not to drive until I see the road conditions once. It’s really dangerous. But then being a driving maniac, I needed to drive at least some distance. So I decided I will drive till Shimla at least from Delhi, put my car somewhere in Shimla and then hire a tourist cab from there. And the plan was achieved with full enjoyment and ultimate adventure/visit and view of some of the most beautiful parts of our country.
My plan was to cover the entire Himachal Circuit. The himachal circuit mainly refers to a start from Shimla and end in Shimla via Kinnaur district (that mainly includes Sarahan, Sangla Valley, Kalpa, Chitkul, Nako village), Spiti valley, part of Lahaul valley including Kunzum Pass, Rohtang pass, Manali, kullu, mandi. A distance of around 1130 KM. And believe me: it is simply awesome, mind blowing and adventurous. A part of Lahaul valley (which includes Sarchu, Keylong and Baralacha la) and Chandratal lake was left which I wish to cover in my future trips to Ladakh. 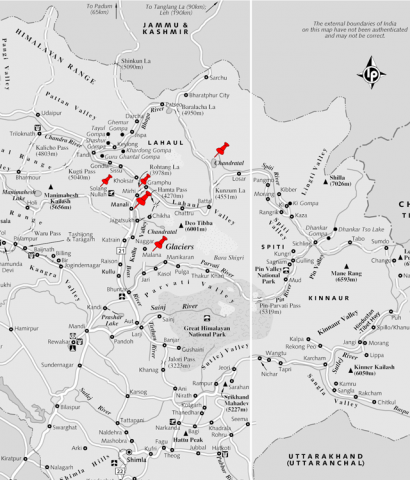 In brief, this circuit is something where the most noticeable fact is a difference in the variation of beauty every moment the eyes are open. Such varied peaks of the Himalayas and such varied and beautiful spots in Himachal are quite unbelievable. And above all it’s a photographer’s paradise.

Continuing the introduction part, the beauty of viewing this circuit, is the continuity in travelling. When I say continuity, I mean non-stop driving throughout the day and staying in some of the most beautiful places/villages during the night and spending some beautiful evening in these places. So to really enjoy be prepared for a continuous restless travel. As a matter of fact when one sees the beauty of Spiti, he/she does not need rest. Nature itself provides rest.

I had planned for this trip almost for over 4 months through one of my friends who has been to the place two years back. He helped us to arrange a cab (Tavera) from Shimla. Because the planning was so methodical, there was no problem at all. All logistics was already in place, and we just had a nice 8 days of travel. I always knew getting to Shimla would be time consuming if we plan to go by Shatabdi till Kalka and then by toy train. Above that, I also had the desire of driving through mountains a bit. As a result, to save time and to drive, I decided to travel through to Shimla and reach as early as possible, for the first day just roam around the Mall road and then start for further travel the next day. I planned my itinerary like this:

Day 1: Drive to Shimla from Delhi. Check in to a hotel and make arrangements to keep the car somewhere for 6 days (my father helped me with that through some of his office connections). Visit Mall road and local markets in Shimla.
Day 2: Start for Narkanda and stay in Sarahan (Kinnaur District)
Day 3: Visit Chitkul, come back and move on to Kalpa and stay there (Kinnaur District)
Day 4: Move from Kinnaur to Spiti via khab, nako and stay in Tabo (Spiti District)
Day 5: From Tabo to Dhankar Monastery, Kaza. From Kaza to Kibber, Key monastery back and stay in Kaza.
Day 6: From Kaza to Manali via losar, batal, kunzum pass, chatru, gramphu, Rohtang Pass
Day 7: From Manali to Shimla via kullu, mandi, sundernagar
Day 8: Shimla to Kalka and back to Delhi

Day 1: Drive down to Shimla and quick local view of the beautiful capital

Shimla the capital of Himachal is one of the best hill stations of India. Well connected to the national capital by National Highway 1 till Chandigarh and then on NH22, it is one of the hill stations, to where throughout the plain the hills the road is simply awesome.

Shimla is around 396 KM from Delhi and around 130 KM from Chandigarh. We always knew Chandigarh is around 4-5 hours of drive and then another 3 hours and one reaches Shimla. It was almost exactly like that.
As always, I decided to start early with my parents and we started from our home in Indirapuram (Ghaziabad) around 5 AM on 11th of August 2012. It almost takes an hour to cross the capital via Azadpur bypass and then finally catching the NH1. By 6 AM we were almost there in the highway. And then starts the National Highway 1. NH1/NH1D are often considered as one of the best highways in the country, more specifically because it stretches till Ladakh via Srinagar and finally meets the Manali Leh Highway at Leh. However more recently because of constructions going on in places near Panipat and Karnal, maintaining a consistent speed in the highway is a difficulty. Almost every few KMs, there is a flyover under construction. Having said that, it’s an absolute pleasure driving through this highway. The 6 lane highway, one often finds almost no difficulty to drive at an average speed of 100 KMPH. 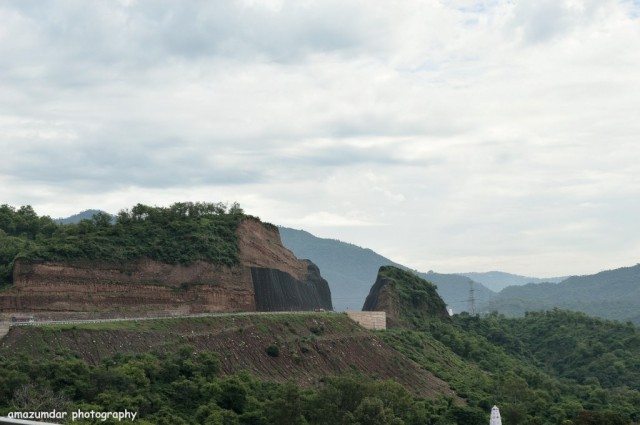 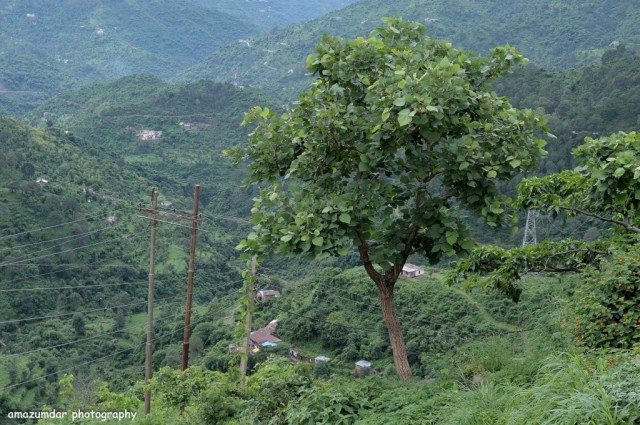 View from a spot 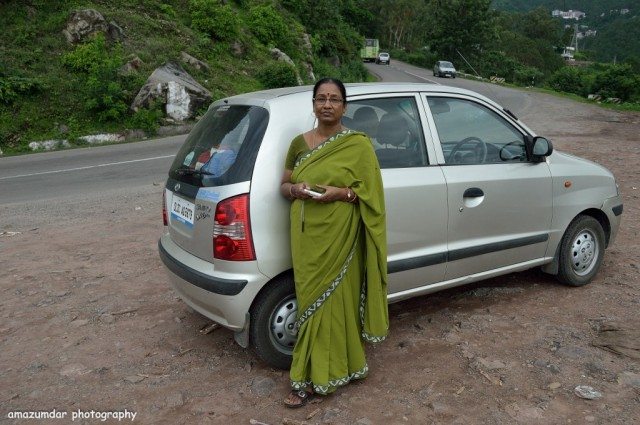 Once we cross Chandigarh bypass and reach Pinjore Garden., then on starts the awesome hilly roads that leads to Shimla. This is one of the beautiful drives and one just enjoys moving ahead in the Himalayan expressway towards Shimla.
The hilly road for a drive to Shimla is a beautifully maintained 2-lane road for a hill station in India. Absolutely safe and ideal for driving, one should experience this drive personally. We reached Shimla as per plan at around 1 PM and directly headed towards the hotel my father got booked. The hotel was also nicely situated and very near to the Mall. Because of off-season, we got hotels quite cheap and descent. We settled down in the hotel, parked the car in a pre-decided location and took rest for couple of hours. The car stood in the parking for the rest of the week, before we got back to Shimla. 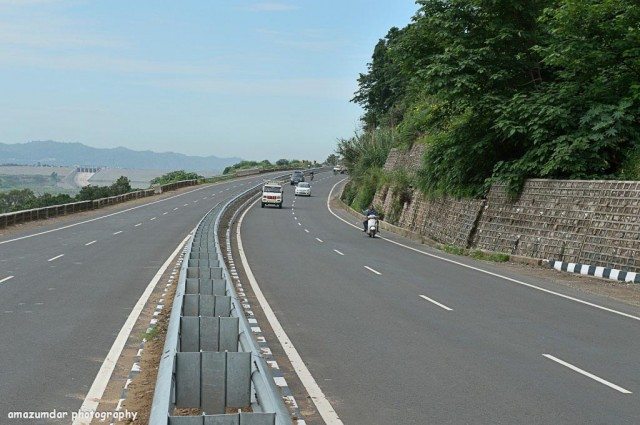 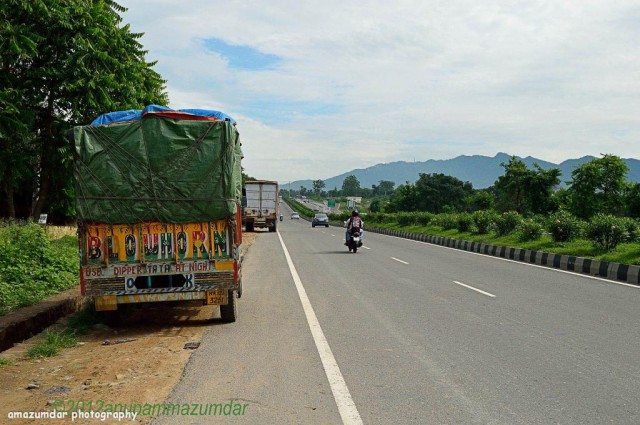 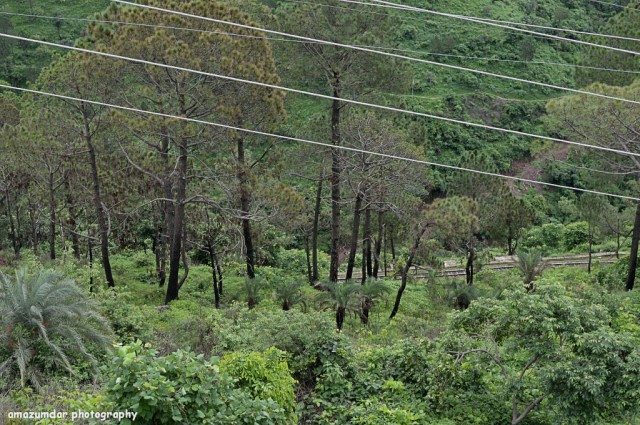 In the evening, we started for a small walk up towards the Mall. On the way, The Grand hotel and the Kali Bari are located. So visited all and then finally reached the Mall. We spent around 3 hours in the Mall and Lakkar Bazaar right below the Mall. Took beautiful photographs and had our dinner in a cool restaurant. The Shimla Mall road is a real beauty in the evening, there is no doubt in it. 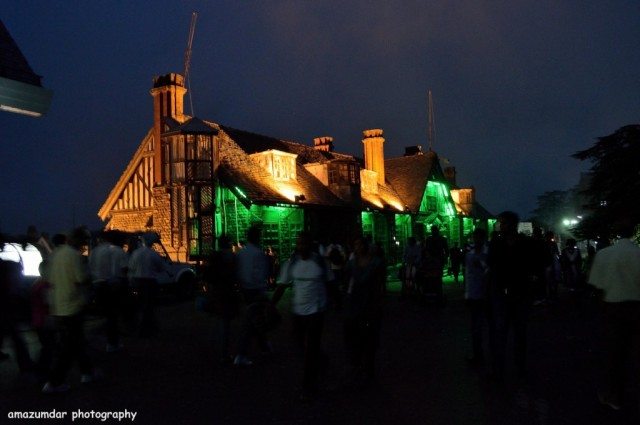 Mall road in the night 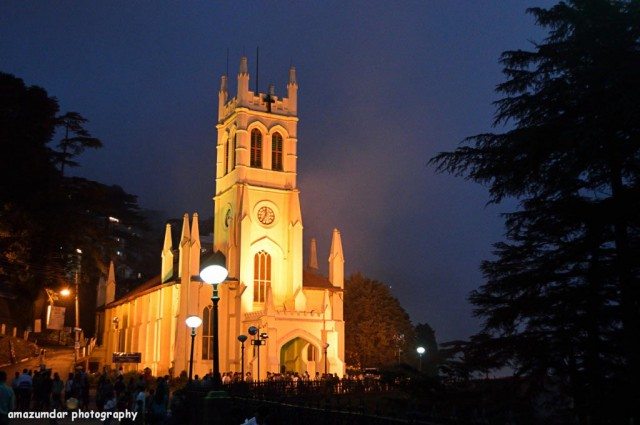 We got back to our hotel in the same route walking around 9 in the evening. Quickly I called up the cab we booked for the rest of the tour and everything was as per plan. The cab driver was on target for the next day and informed us about the time he would be in.
After this went in for a nice sleep. We had to cover a long and adventurous journey ahead.

A few weeks ago, we celebrated the most awaited and significant festival for us Bengalis- the Durga Puja. Having spent a significant number of years of my youth in Calcutta, celebrating Durga Puja in the United States usually stirs nostalgically similar, yet unfamiliar emotions