Suddenly by chance , once I came across an old article in a heritage magazine which mentioned about  an unusual Ratha Yatra festival that takes place during the occasion of Akshay Tritiya unlike the normal monsoon one. It was a Ratha Yatra of odd times.

That very moment I made up my mind to experience the festival first hand at Telinipara , a township on the outskirts of Kolkata along the Ganges river. I waited round the year and finally the date of Akshay Tritiya arrived which generally falls during the onset of summer at the later half of April.

I caught the Kalyani Simanta local early in the morning around 6:30 A.M. from Sealdah station. I took a window seat and the early morning breeze was a respite from the scorching heat to follow on the later part of the day. The morning newspaper guy captured the whole bogey and dumped a hell lot of newspaper. He dropped the assigned quota of the newspaper bundles at every station to his dealers. He did this stuff within a matter of time , say 10 seconds for which the train stopped in each station.

Finally I got down at Shyamnagar Railway station after an hour’s journey. My desired location of Telinipara was just on the other bank of the Ganges for which I needed to cross the ferry from Shyamnagar Ferry Ghat.

The Ferry services didn’t start so early in the morning. So I hired a cycle rickshaw and started touring the important places of Shyamnagar township. Out of all the places , I liked the highly famed Mulajore Kalibari and the Shyamnagar Boudhha Vihara.

Finally after roaming for about an hour or so , I reached the Shyamnagar Ferry Ghat to board my motor boat to Telinipara. The price of the ticket was just three rupees. The journey was awesome and I got down on the Telinipara Ghat after 10 minutes. 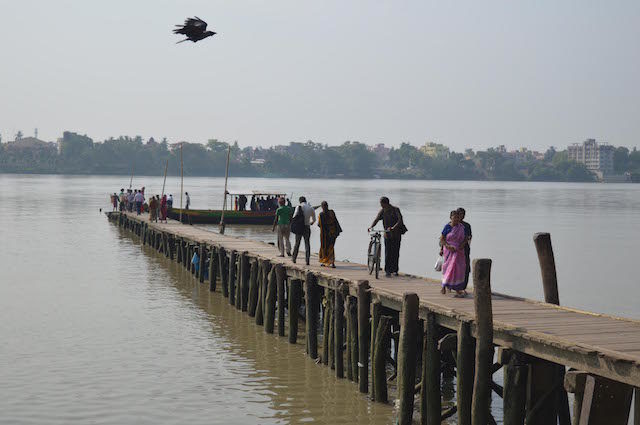 The beautiful ferry ghat of Telinipara

Telinipara was a sprawling industrial township in Bengal during the British period and was quite a name due to the famous Victoria Jute Mills which employed people in numbers. Telinipara has the fame for being the roots of the famous Indian journalist M.J. Akbar who was behind the creation of  famous newspapers like The Telegraph and Deccan Chronicle and eventually rose to fame for being the spokesperson of Bharatiya Janata Party and a Member of Parliament from Jharkhand.

Telinipara is also the backdrop behind the creation of the heritage sweet of Bengal called the Jol Bhora which in turn is associated with the famous sweet maker Surjyo Kumar Modak. The story goes like this that the wife of the Zamindar ordered the sweet maker Surjyo Kumar Modak to make something new and innovative for her son in law. Surjyo and his son Siddheswar after some consultation made a sweet in the shape of the jelly seeds of the palm or the ice apple and stuffed liquid jaggery inside. As soon as the son in law had a bite of the specimen , the jaggery  spilt over his brand new dhoti and there was a roar of laughter among the ladies in the house. Finally the sweet was named Jolbhora and the rest is history.

The jetty ghat of Telinipara provides some picturesque view  over the Ganges and one can enjoy a ride down to the other bank of Shyamnagar . The ticket price of the launch services is still a bare minimum of three rupees which is quite remarkable . The main attraction of Telinipara is the south facing  Navaratna styled Annapurna temple constructed by Baidyanath Bandopadhyay.

Baidyanath Bandopadhyay resided in Mankundu and after retirement settled at Telinipara. He had his wish of spending his old age in the holy ambience of Varanasi . His family members were against this and this resulted in the construction of the Annapurna temple which was compared to a mini version of a temple in Varanasi. It was in the banks of a lake which still stands today just beside the temple. 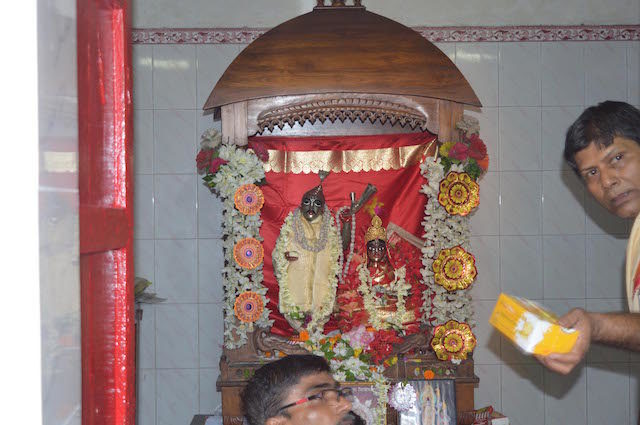 I visited the temple premises and lots of arrangements were going on for the gala occasion. I sat down and talked with the family members of the Bandopadhyay family. Even the Rath was getting decorated nearby. They recommended me to visit the nearby heritage Ram Sita temple of Paikpara. So I proceeded towards it which is at a walking distance. 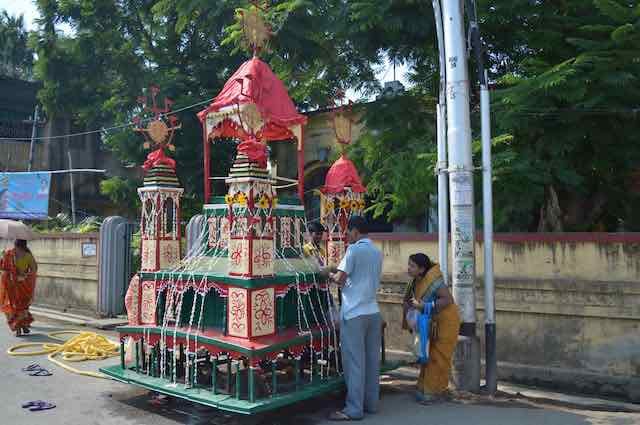 The Rath getting ready for the occasion 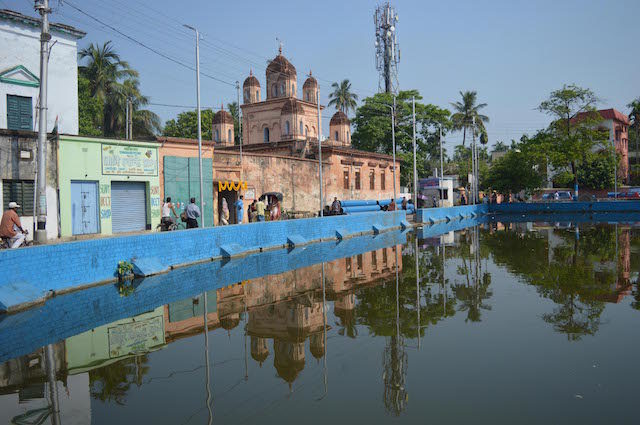 The temple on the bank of the shrinked lake

Another 10 minutes walk from the Annapurna temple past the Annapurna Pathagar ( the local library ) , one comes across the dilapidated Navaratna styled temple of Ram Sita in the locality of Paikpara. The temple is currently in a sorry state and on the verge of extinction.

One can clearly imagine the richness and brilliance of the temple during its hay days by the sheer size of the temple and the few rare terracotta plaques that exists still today. The name of the road is S.K. Pal Chowdhury Street  and the current owner of the temple , Mr. Debkumar Banerjee is in urgent need of some government help and intervention to restore the precious monument. 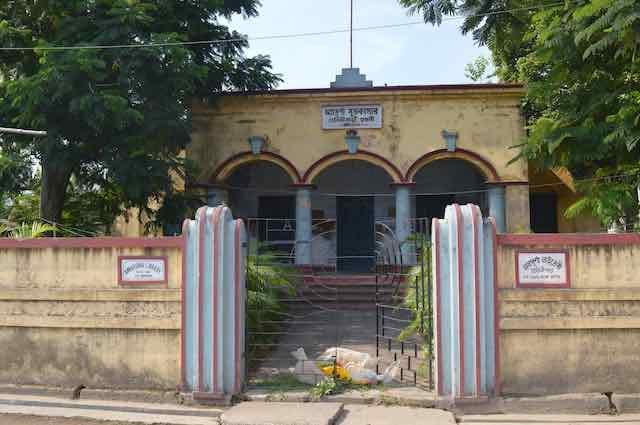 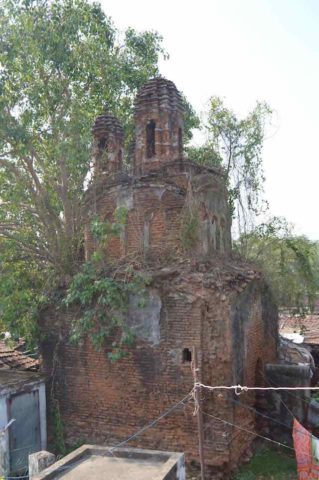 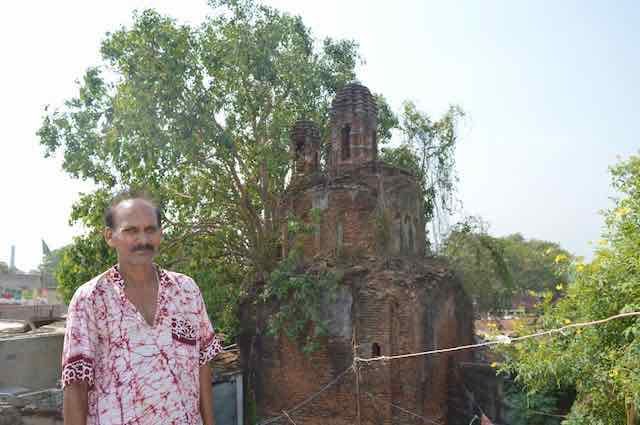 The property with the custodian

The entire Telinipara comes to life on the occasion and date of Akshay Tritiya when a rare event takes place on the streets of this buzzing town. A heritage chariot festival or rath yatra happens on this day which is more than 200 years old. The metal Rath is beautiful and around 12 feet in height. The Rath starts from the Annapurna temple complex and after passing through the narrow lanes of the township ends at the Kangali Ghat on the banks of the river Ganges. 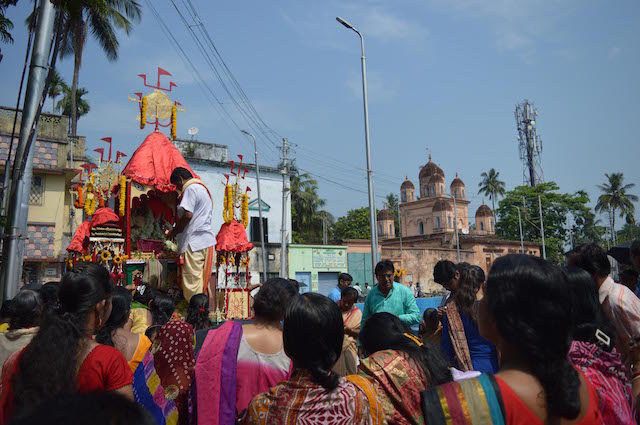 Devotees gathering in front of the Rath 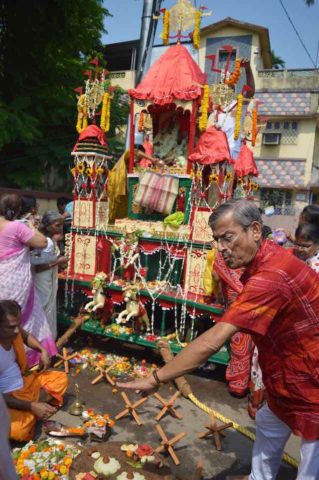 Ceremony for starting the chariot 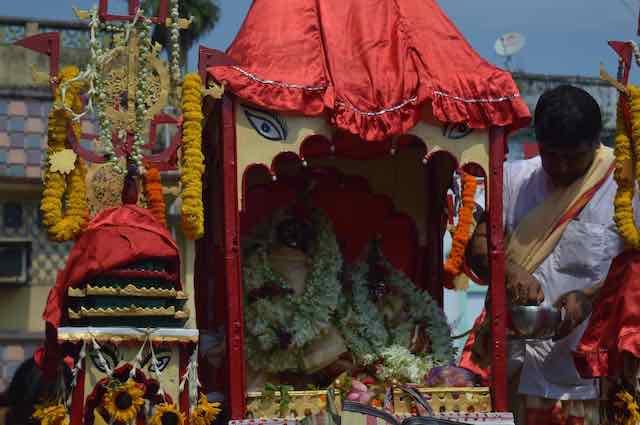 Bhog of the lord

The story goes like this. Annapurna and Bholanath goes on a tour of their kingdom on their Rath for listening to the problems of the people. When it is quite late, Lakshmi and Narayan are worried and goes on a search operation for Annapurna. Finally they find them on the banks of the Ganges. Then takes place the phase of Manbhanjan or in other words requesting them to return back home. Finally Annapurna returns back home in a palanquin. The entire sequence is enacted on the day of the Rath Yatra . A huge fair takes place on this day in a ground adjacent to the temple. It is quite an experience. 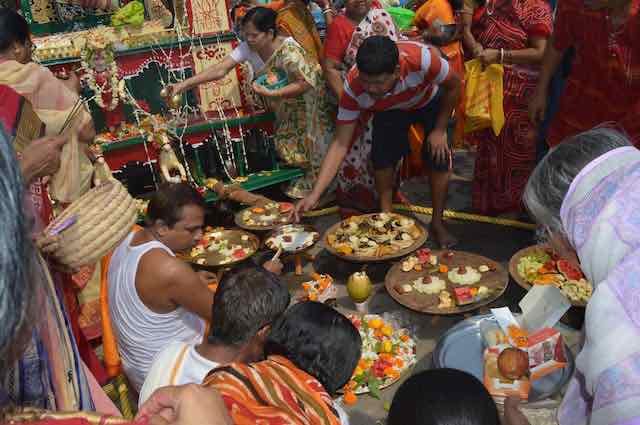 Devotees with their umbrellas 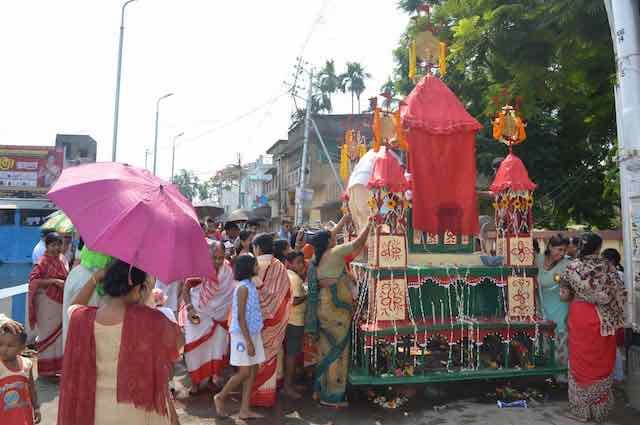 I followed the Ratha Yatra for quite a distance and finally couldn’t bear the scorching rays of the sun. The main fair in the adjacent ground takes place during evening which I failed to attend as I had to return back. I was feeling honoured to attend such a unique heritage festival.

At around 12 pm , I hired a Toto ( battery operated auto rickshaw ) and started exploring the adjacent township of Bhadreswar. Finally at around 2 pm , I reached the Telinipara ferry Ghat for the return journey. Ferry Service was halted for a brief period due to high tide in the river. For the first time in my life, I experienced high tide on the Ganges. It was quite a sight and everyone enjoyed it to the fullest. Finally I reached back home in the evening by catching a return train.

Have you heard of Telinipara’s unique Ratha Yatra during Akshay Tritiya? was last modified: May 2nd, 2017 by tirtha22