Winter in Kolkata is very enjoyable. This is a good time to visit Kolkata. The temparature varies between 10°C to 15°C  and a good time for enjoying outdoor travel. We would also wait for the winter to come for a different reason.  It was the time to visit ‘Chiriakhana’ (or Zoo) and a circus at Park Circus Ground in the evening. It became an annual affair for all of us. We just wanted to spend some time together. Most of the time, it was a family get together for my parents as well. We were so excited to meet some of our cousins that we couldn’t sleep much the night before. In the morning, we used to take a train to reach Kolkata and met others near the Metro Cinema at Esplanade for a day’s outing.

They took us to Zoo first as a routine. We, the children, were excited to see the tigers, lions, giraffes, elephants and didn’t want to come out. We used to run, play in the lawn and did everything what children are supposed to do. We took lunch with us, packed in few small tiffin boxes and at the end, sat in the lawn and ate. It was never anything fancy,  Luchi, Allu Bhaja, Begun Bhaja, Alur Dum, Sandesh and tea in few flasks for the elders. But it was so much fun and it made us feel special.  We didn’t even aware of the word ‘potluck’ that time. We shared stories and laughed together. After that, we used to go to Park Circus Maidan, which is the home to circus companies during the winter. I remember little things like this from my own childhood and those are the kind of memories I’d like my kid to have as well. So, even if it is not a winter season, during our recent visit, the two of us planned to show him the ‘Chiriakhana’ or ‘Zoo’ at Alipore. For the last four years we are visiting Zoo at Delhi, so zoo is not a new thing for him. However, he was excited to see the Aquariums, so are we, visiting there after 30 + years probably. 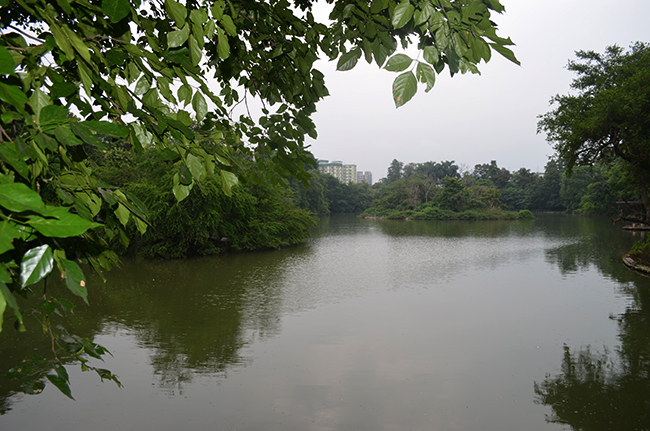 The Alipore Zoological Gardens is India’s oldest formally stated zoological park, apart from the royal and British menageries. It has been open as a zoo since 1876, and covers 18.81 ha (46.5 acres). It is probably best known as the home of the now expired Aldabra Giant Tortoise Adwaita, which was reputed to have been over 250 years old when it died in 2006.

The condition of the Aquariums are in is unspeakable. We were so disappointed to see the condition of the Aquariums that we thought why we brought him here. Was it better 30 years back? I really do not know. May be yes or may be I didn’t understand the meaning of good or bad that time. All I can say that it requires serious attention from the concerned authorities at the earliest. Don’t expect anything or I won’t recommend anyone to visit this place at all, till situation improves.

We entered the zoo by 10:30 a.m. To our surpise, we were allowed to take biscuits & chocolates and there is no restrictions on items like Delhi Zoo. One can’t take food inside in Delhi Zoo and everytime, we saw mothers argued with the security men to allow them to carry something for their child. It happened many times with us as well and finally, she had to give up and we rush back to the car to keep the things. Both the points are valid and I don’t know which side I should take…anyway, the new entrance to the zoo itself is a good one. The first impression was good and due to the rains there was lush vegetation. It was drizzling. There were not much crowd in the morning and it was anyway the first day of the week (Zoo remains closed on Thursday).

The first interesting attraction was the chimpanzee but the guard cautioned us not to go too close. He was too far away to see properly. May be enjoying the weather with hand-made tea and pakora inside his home.

We then moved to Zebra, which is my son’s favourite. He used to visit Delhi Zoo only to see Zebra and every time come back home disappointed. The lone Zebra in Delhi zoo died few years back. He was very happy to see Zebra for the first time in his life.

We also saw Iguana. Iguana is normally found in Central & North America. A little walk later, we found the Bear, enjoying the lovely weather and was ready for a photo session. 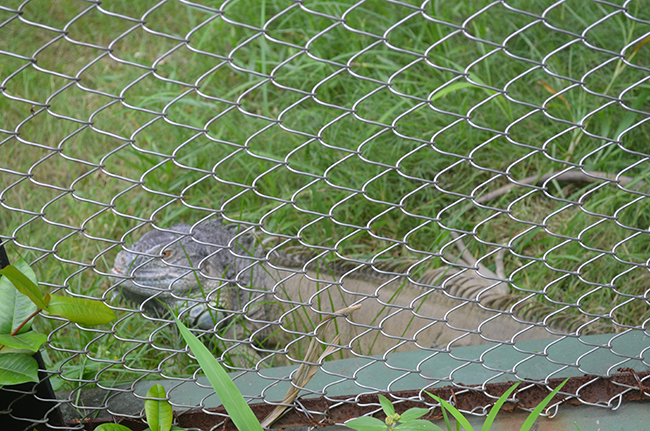 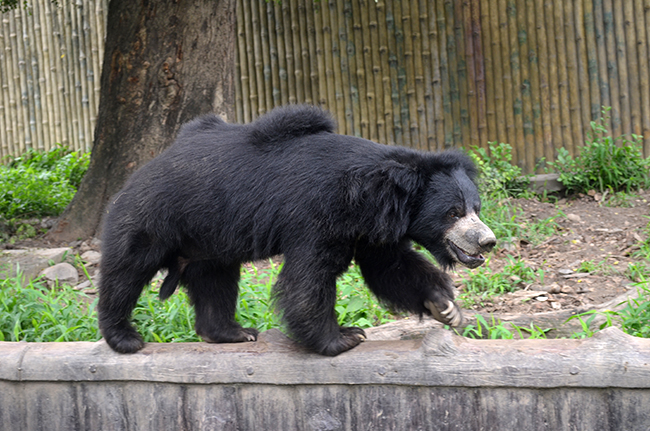 A few steps further, there were few white fallow deer. They look so beautiful, so as the rest of the deers. 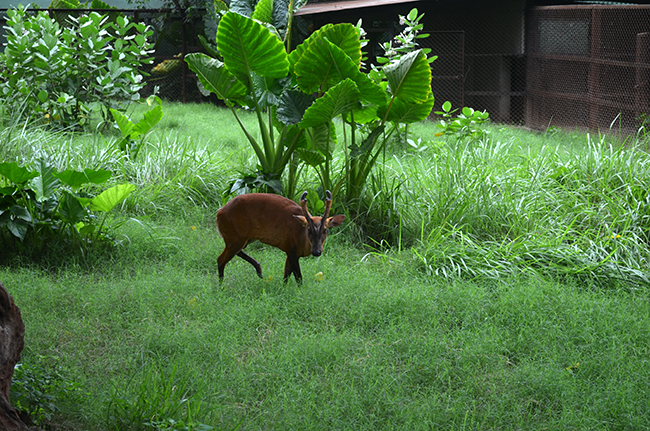 A little while later, we come across the enclosure of hippo, but they were inside the water for a long time, so as the crocodiles. The Rihno was playing in the water. 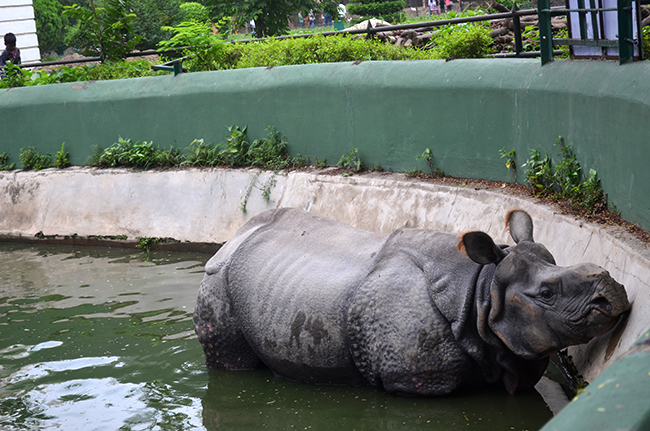 Then there was a prize catch. It is wonderful sight to see the dance of a peacock in the rain…and I had never seen it before. 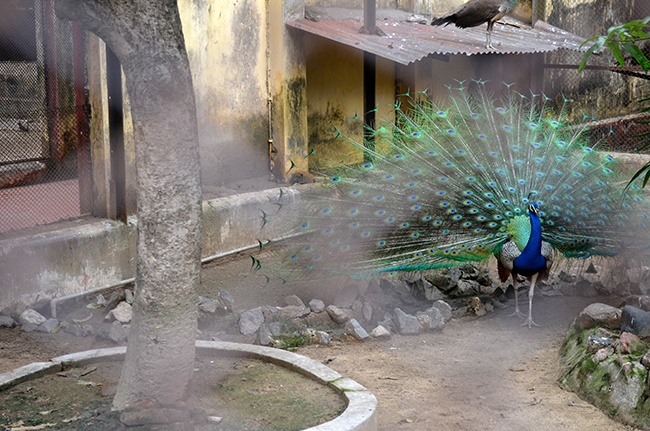 The National Bird of India

We saw many animals and birds and went around the lake. It was drizzling since morning but this time it started raining heavily and we again took shelter under a big tree near the Giraffe’s enclosure. We were not carrying umbrella and drenched totally within few minutes. The rain stopped after some time and then we saw few swans in the lake. It looks so beautiful. The lake is also a paradise for migratory birds during winter. 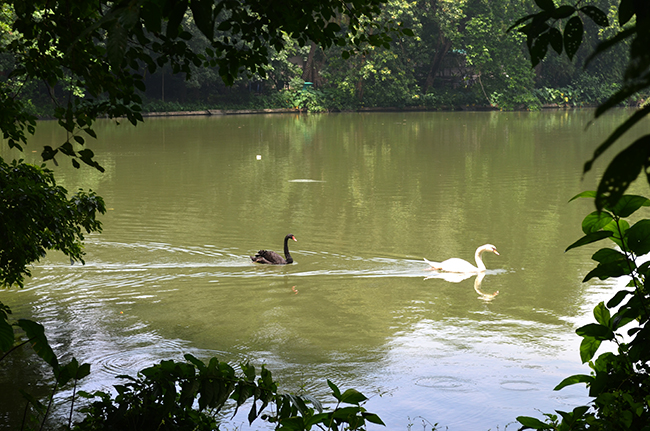 We were in the last leg of the zoo, but where are lions, tigers and elephants. Did we miss them? However, very soon we saw the den of the lion, but unfortunately he didn’t seem to be happy to come out and could only see his back, so as the White Tiger. However, the Royal Bengal Tigers didn’t disappoint us and walking freely inside their caves. It was sheer joy to watch, as well as feel sorry for them. 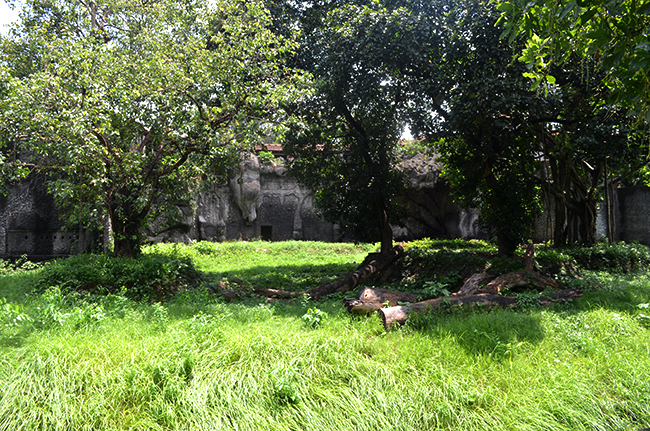 The den of the lion 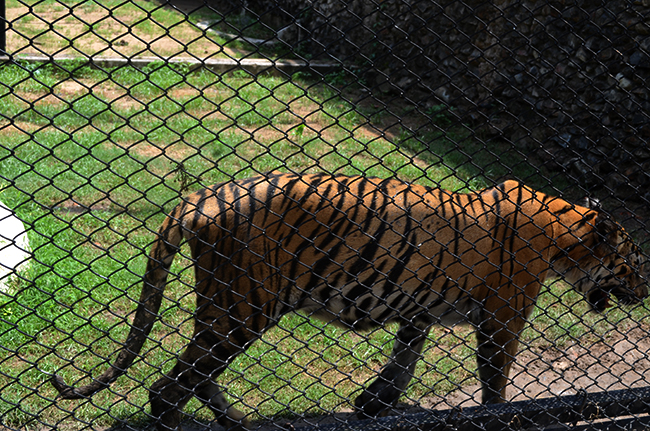 Finally, we saw three big elephants near the entry/exit gate. They are in playful mood and children were very happy to see them. 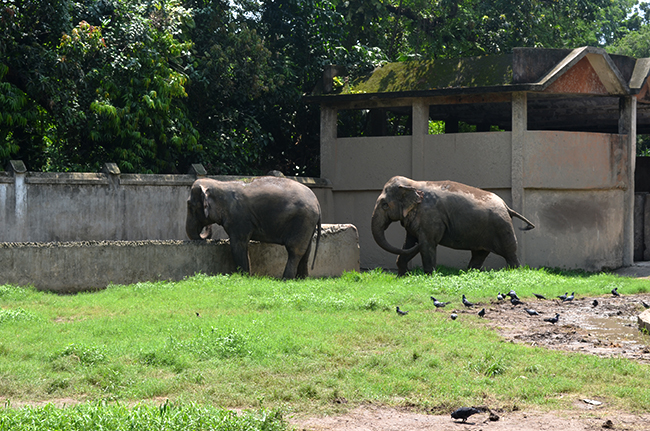 After the initial disappointment at Aquariums, we spent a very good time in the zoo. We had heard a lot about the cramped living condition of the animals in Alipore zoo, somewhat true compared to Delhi’s large & open Zoo, but a walk through the jungle atmosphere, nature and wild animals did have a soothing effect. A place where children can learn and get to know various animals. It is not as big as Delhi Zoo (the only other zoo, I visited till date), but it is not bad either. Till the time existing zoo shifts to a new place i.e. Sonarpur (as heard from a long time now though by when noone knows), it will still attract children and people at all ages and a must visit place in the city in favourable condition.

The day ended with a nice lunch at Rang Mahal restaurants at Park Street.

The Zoo is closed on Thursday.