Have you ever heard of the story of the elephant and the blind men who took their turns to touch and describe an elephant? When I moved to the northwest corner of the US, I thought this is what US looked like- Volcanic mountains, jagged peaks, evergreen forests, the Pacific Ocean, tulip fields, et cetera. Then I moved to the east coast and thought- Ah, US looks like this too – cities with history written all over it, sky kissing high rise buildings, forests, underground caves, et cetera. The northwest of the US looks significantly different from the east coast, and you would know right away. So why am I telling you all this?

Because last month, I got a chance to visit the Midwest US for the first time, and the first thing I thought was, Oh, so US looks like this too? Flatlands, no mountains, there is a certain thing about the topography that looks very distinct from either the northwest or the east coast. I was visiting the city of St. Louis (Missouri) for 66 hours. And the moment I landed in St. Louis, I knew I loved the city. 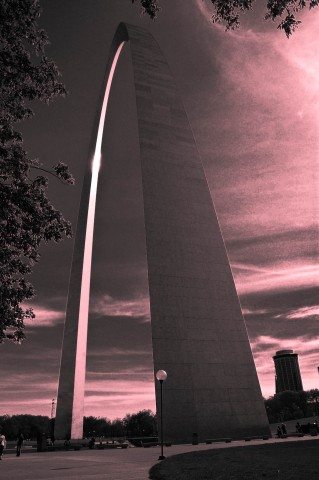 So what was so nice about St. Louis, other than the fact that it is this nice little city in the Midwest? Well, you will be surprised how similar this city looks to my home back in Kolkata. The cobbled streets, the bridges, the Mississippi river, the riverfront, I was just amazed at the way this random city in the US resembles my home back in India. Some of the pictures I took will vouch for that. 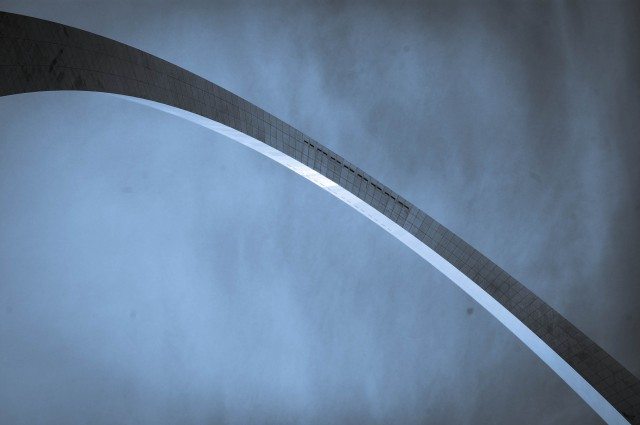 The 16 windows on each side of the arch

I had two evenings and half a day to see whatever I could of St. Louis. The first thing that you see when you land here is the huge Gateway Arch. It reminded me of the Space Needle in Seattle for the simple reason that no matter where you go, the Gateway Arch will show up in the most unexpected places, while crossing the road, peeking from the space in between two adjacent buildings, and even from the airplane. Also known as the Gateway to the West, this monument symbolized the westward expansion of the United States. Situated right by the Mississippi river, the Gateway Arch is the tallest man-made monument in the United States. Standing proud and all of 630 feet tall, it is entirely made of 4 by 8 foot sheets of stainless steel. There are a number of other trivia you could read up, but honestly, when you see the arch, you will crane your neck, open your mouth in amazement, and go, “Wow!!”. 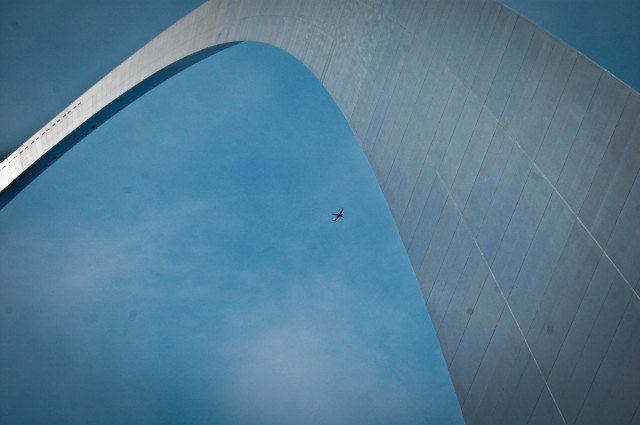 The two bases of the arch mark the north entrance and the south entrance. I tried getting on top of it on Day 1, but it seems the tickets were all sold out. Since it closes at 6 pm, I got advance tickets to get at the top the next day. A space capsule seating 5 people takes you up there after a really long and circuitous queue, and this space capsule for an elevator doesn’t shoot up straight. If you look at the structure of the arch, it looks like a curve, or a headband. Hence the capsule actually takes you up slanted. 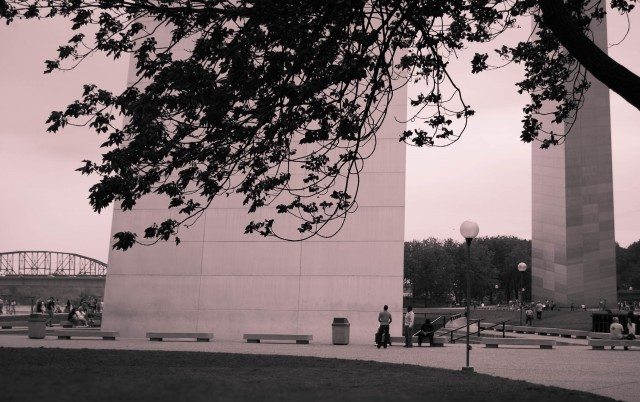 Once on top, the view from there is amazing. On one side is the Mississippi river, the state of Illinois beyond it, bridges, ships, trains, and helipads. On the other side, you can see the entire city, the downtown, the interstate 70, the old courthouse, and the Busch Stadium. Each side of the arch has 16 rectangular windows, and yeah, I craned my neck and counted them all. It is a different experience however when you get on top. For one, this monument scarily swings whenever there is a strong air current (and the Midwest is famous for strong winds). You need to poise yourself on your belly if you want to take some good pictures from the top, and while doing so, I could feel the emptiness in my stomach as the monument swung in the breeze. I was told that the swing I experiences was a mellow half an inch shift of the monument, but on a stormy day, the arch can swing up to 9 inches. If half an inch of motion caused such a chaos in my stomach, I’ll leave it for you to realize how scary a 9 inch swing would cause. 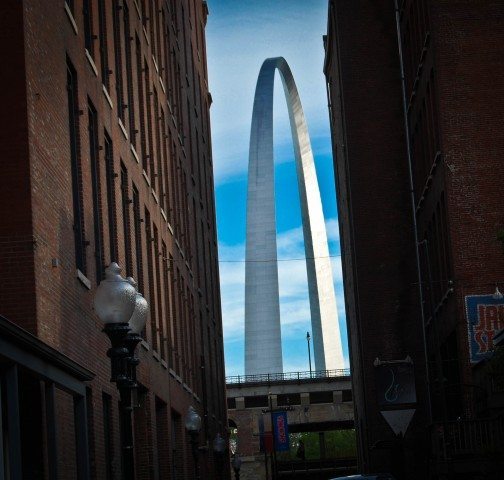 One of the interesting pictures I took from the top is that of 2 weddings that were being photographed in the park 630 feet below. Little did the people know that there was someone up there covering their aerial wedding pictures. Also, I went a little crazy swinging on my belly trying to take the pictures of the stem and the base of the arch, and here are some of my painful efforts.

Photographing wedding 1 from 630 feet above 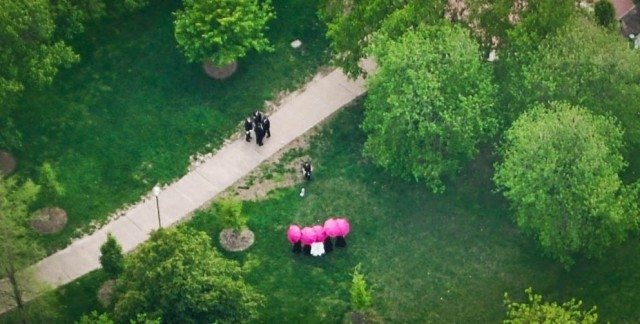 Photographing wedding 2 from 630 feet above 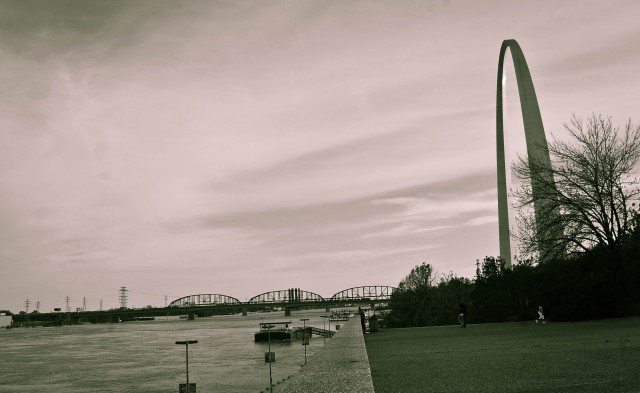 Walking along the waterfront will remind you for Kolkata. There is a bridge on one side that looks like Howrah Bridge separating Kolkata and Howrah. There is another bridge nearby that resembles the Bally Bridge in Howrah. The brown Mississippi river itself looked like the Ganges (river Hooghly) to me. And then there were the cobbled streets near Laclede’s Landing that reminded me more of Kolkata. There is even a statue of a horse in Forest Park that reminded me of the 5 point crossing at the Shyambazar More in Kolkata. 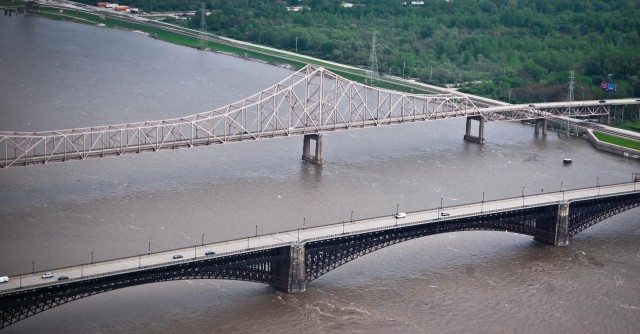 The river that resembles Hooghly 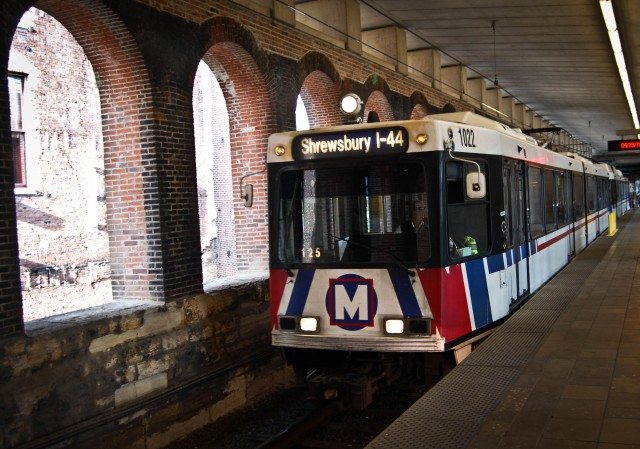 The metro that takes you around 2 states

There is this nice metro that takes you around all the touristy places (Forest Park, Central West End, Downtown, Gateway Arch, and even the Del Mar Loop, a hub of food joints mostly for the undergraduates. Three of the neighborhoods you should definitely not miss are The Hill (an Italian neighborhood), the Central West End near the Washington University Medical School (accessible by metro), and The Delmar Loop (accessible by metro again). You will love walking around, watching the people, and being spoilt with some great options for food. I had some amazing sushi at the Delmar loop, though honestly, I no longer remember the name of the place. I also had these unusually flavored scoops of ice cream, the green one being the green tea flavored one and the white being sesame seed flavored. Quite unusual flavors of ice cream they were. The other cool thing I realized is the map of the metro. Half of its route falls in the state of Missouri, and the other half falls in the state of Illinois. I have never seen a city metro covering two US states before this. 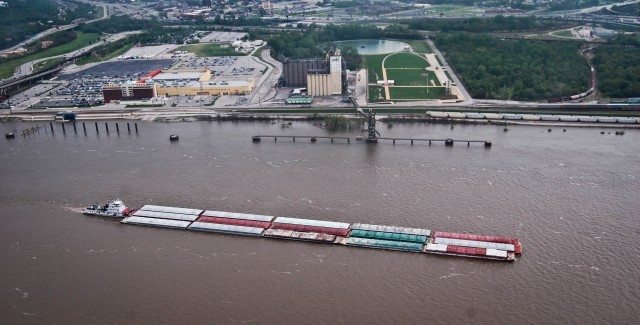 Cargo being carried across the Mississippi river 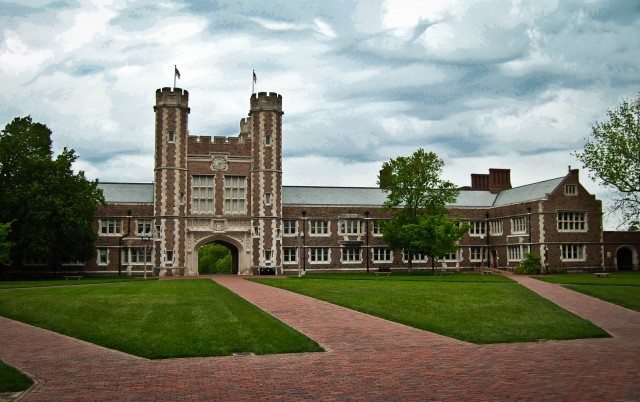 I have a big fan of visiting campuses and taking campus pictures, especially for the variety of architectural designs these campuses offer. The Medical School campus is located near the Central West End neighborhood, but there is a different campus for the other graduate and undergraduate departments. It is a beautiful campus, resembling a lot of the Princeton University campus. I like the way they mowed the grass to look like the alphanbet “W”, signifying the name of the campus.

My most favorite place after the Gateway Arch, this is a park with lush green manicured fields, fountains, walking bridges, ducks, museums, zoo, and the botanical garden. It has a status identical to the statue at the Shyam Bazar More in Kolkata. It was a cloudy day with signs of incipient rain, and the green grass looked even prettier with the clouds. I spent an hour or so walking around, chasing the ducks, taking some pictures, and just breathing in the beauty of the park. 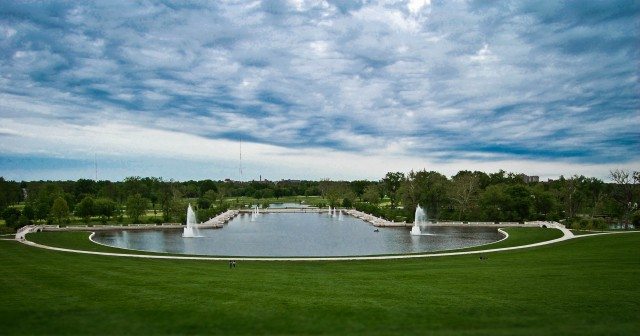 A cloudy day in Forest Park 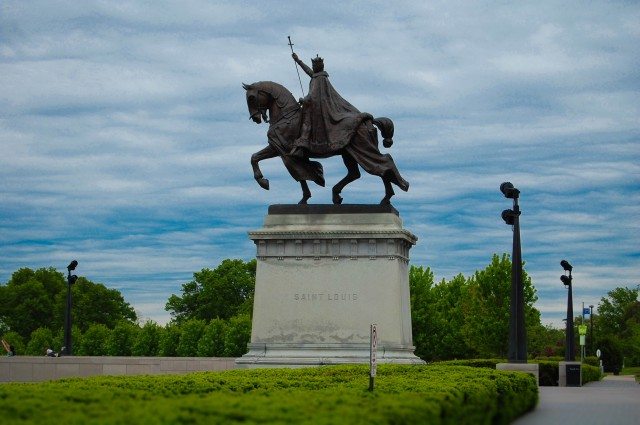 I loved my trip to St. Louis. I was skeptical, since the week before I flew, a tornado had destroyed parts of the airport, and there were some turbulent weather conditions prevailing. The night I landed, there was some serious repair work going on at the airport. But the weather was just perfect during my stay there. Other than going around seeing places and taking pictures, I also watched a live concert by Will.I.Am of the Black Eyed Peas. Watching a live concert was an amazing experience. The energy of the people, the light work, and the acoustics were amazing. And while I am into good words about the city, let me end with another little trivia. One of my very favorite movies, Up In The Air, was mostly shot in St. Louis. 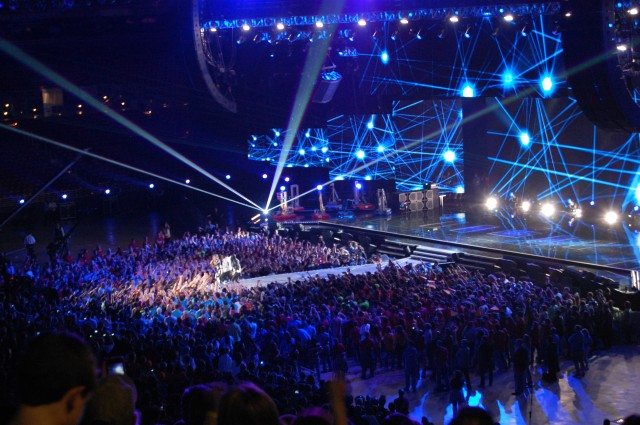 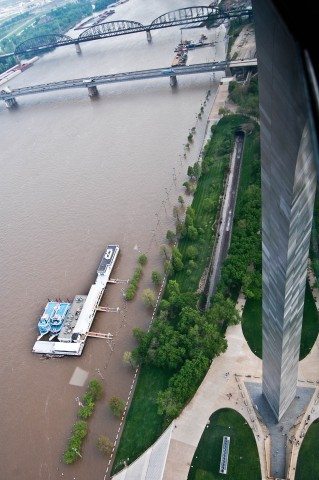 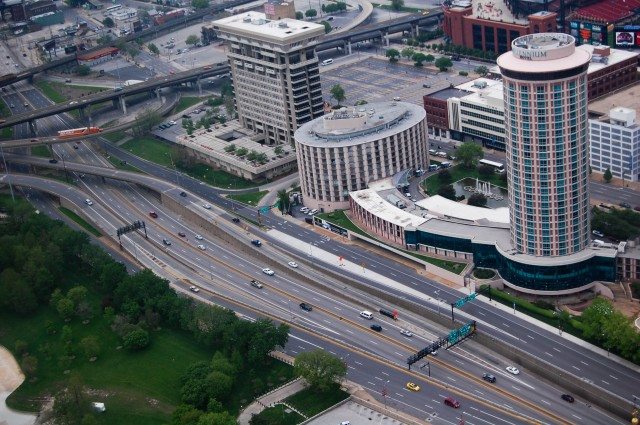 When you crane your neck till it hurts, you get a picture like this

Balancing on my belly taking pictures

The Old Court House and the Downtown, as seen from the Arch 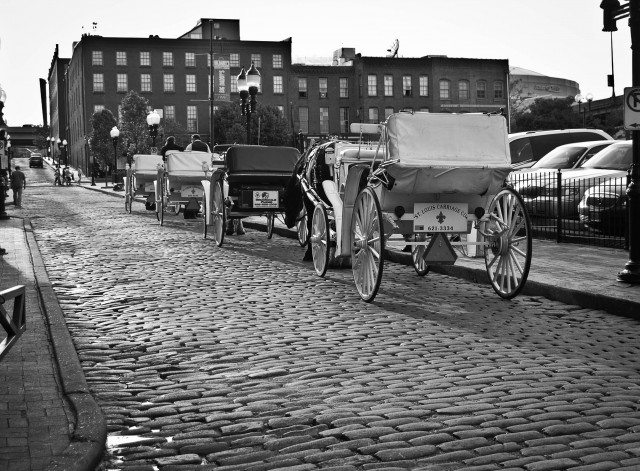 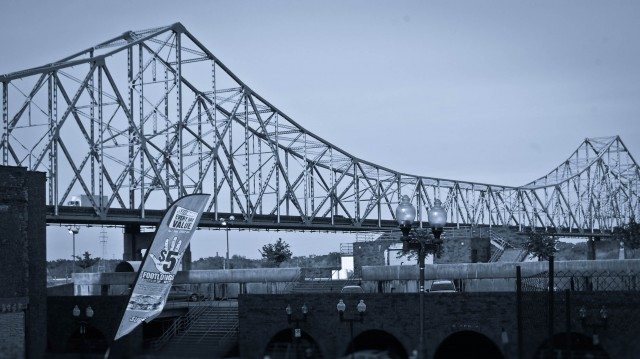 The lookalike of Howrah bridge 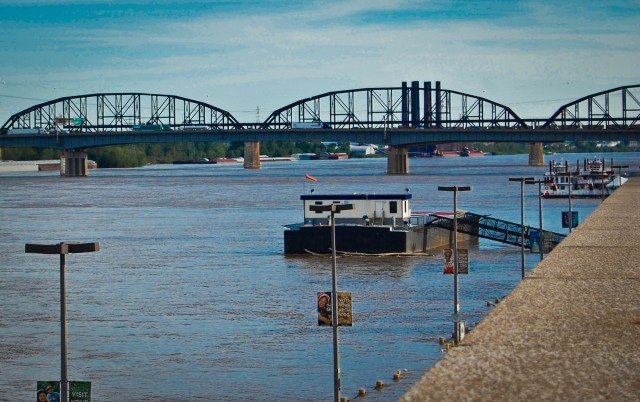 The bridge that looks like the Bally Bridge in Howrah

St. Louis – A Reminder of Kolkata was last modified: May 12th, 2020 by Devasmita

It was 9 Sep 2010, the day i got back to office after a great trip to Hemkund Sahib, Valley of Flowers, Badrinath and…