We had spent two days in Srinagar, and were off to Gulmarg. If you still haven’t read the previous posts then click here. After spending some quality time in Gulmarg, we left for Srinagar. We still had to cover Mughal Gardens & Pari Mahal. After the long drive from Gulmarg, we visited both the gardens and headed back to the hotel. I have already published a photo essay on all the gardens; Click here if you haven’t seen the same. Moving on, next day was our third day in Srinagar. According to the itinerary, we had to leave for Sonamarg. We woke up around 7:00 AM, had a tea & fortunately, this time it was made from Amul Milk .We left the hotel at 9:00 AM and Mr. Rouf was waiting for us on the other side of the lake. 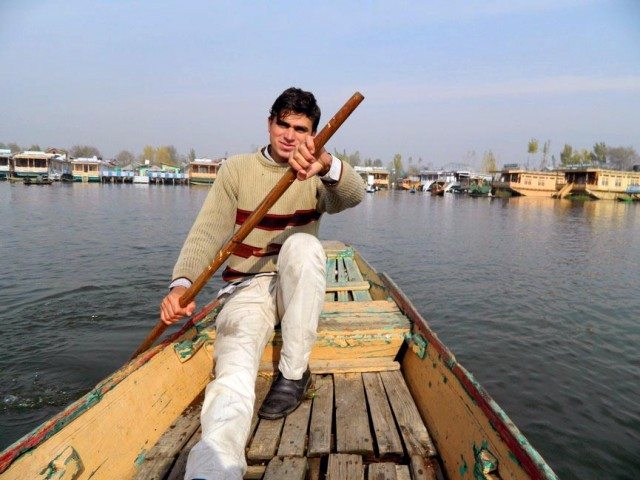 A Kashmiri riding a Shikara

Mr. Rouf gave us some info. About Sonamarg. He said that Sonamarg is 87 km northeast of Srinagar & situated at an altitude of 8,950 ft. .The drive to Sonamarg is through the Sindh Valley which presents yet another spectacular facet of countryside in Kashmir. Sonamarg is the base of a major trek that passes along several mountain lakes -Vishansar, Kishansar, Gadsar, Satsar and Gangabal. Sonamarg is also the take off station for the drive to Ladakh across the Zojila, a major pass in the Great Himalayan Range, through which the Srinagar-Leh Road passes. The everlasting Thajiwas glacier, Mansabal Lake, Narang Ruins etc. are some of the places of interest in Sonamarg.  He also mentioned that the way to Sonamarg is a feast for eyes & it would seem that you are in Switzerland. In the month of spring , the entire region is flooded with bright yellow gold flowers known as crocuses.  In addition to the beautiful spring flowers, travelers to this region are treated to gorgeous views with include alpine forests and mountain peaks covered in snow.

A waterfall on the way 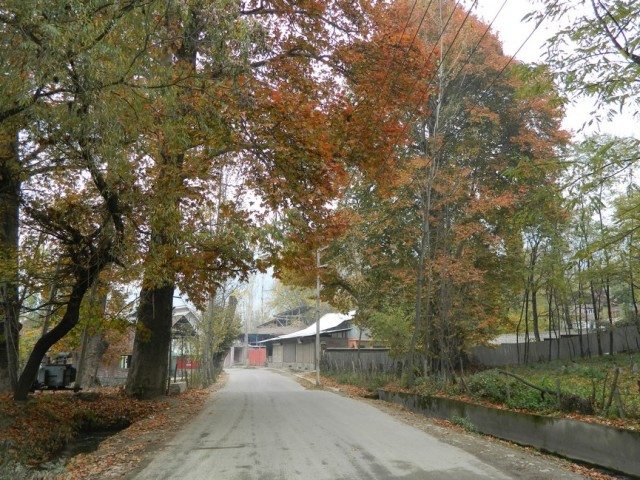 Chinar trees on the way

We had some cookies and namkeen on the way, which we had brought from Lucknow. Everyone was indulged in seeing the view, and as usual I was busy capturing those moments in my camera. After plenty of shots, I decided to have a capture the scenery in my mind. Indeed, the picture of those beautiful roads is still fresh in my memory. We had covered a good distance in an hour or so. The one funny thing I noticed about all Kashmiri taxis was, that each one has something humorous written on them and these people literally played with spellings. One of them was: “Dekh Saheli, Tera Sajaan Jaa raha hai” ;). Check out the pic for other one.

Moving further, we came across the snow capped mountains and the Sindh River. The breathtaking view was so beautiful that I could have spent hours sitting there. Now, we were hardly a few kilometers away from Sonamarg. Below are some more pics of the way. 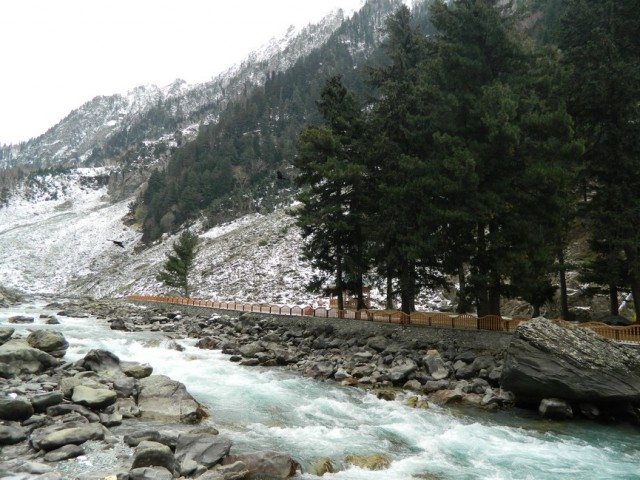 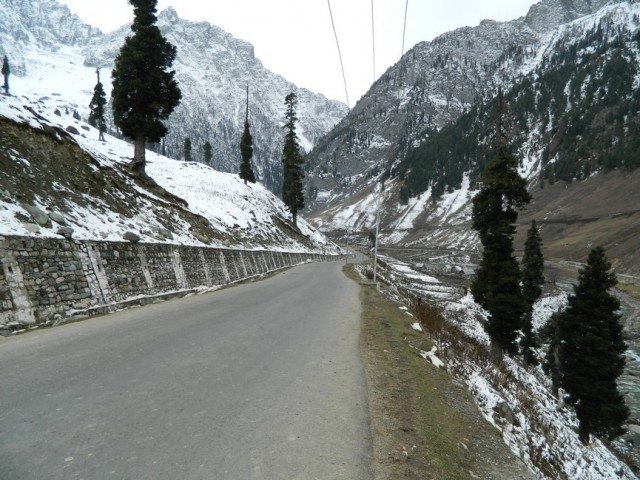 View from the Car 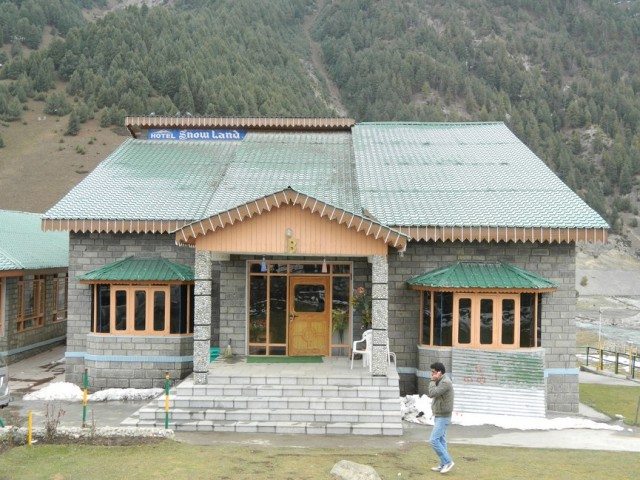 Having a meal in the restaurant

God! It was so cold! I had just brought a jacket with me. Anyways, as soon as we were out of the restaurant, we were surrounded by horsemen who tried to convince us with their competitive prices. They had good marketing strategies. At first they offered us Rs. 1,000 for a ride up to Thajiwas glacier.After an argument they halved the prices. We moved further and we rode a horse up to some Kilometers, then I sat on a sledge. Ahh! It was indeed very enjoyable. :) The sledge vala bhaiya charged Rs. 70 for one round. I must say that those tons of horses make this place a little dirty. They shit all around and the melted snow makes it mire. 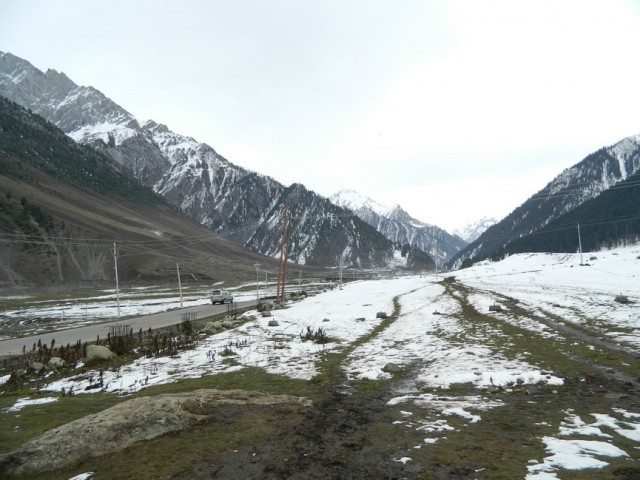 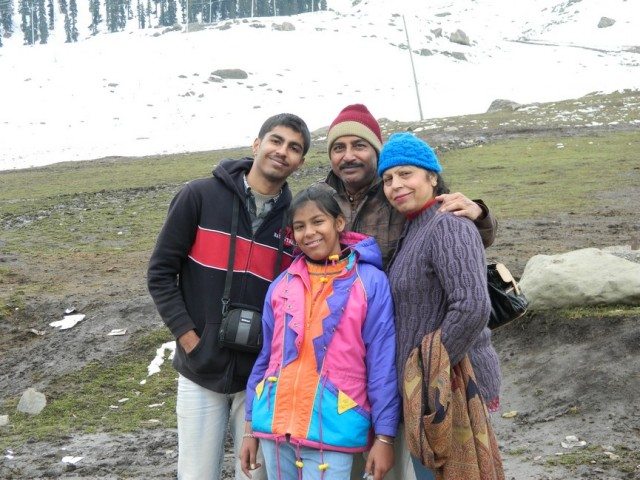 After exploring and having fun in Sonamarg for about 2.5 hours, it was time for us to go back. We proceeded to the taxi stand and Mr. Rouf drove us back to Srinagar. All of us were so tried that as usual we took a nap in the car itself. We had to cover Nishat Gardens. After that were supposed to enjoy the Shikara Ride on Dal Lake. The photo essay covering Nishat Gardens is already published. In case you haven’t read that click here.

It’s the end for this part. In the next part I’ll be covering the Shikara Ride in detail. Hope you all enjoyed reading this part. Stay tuned for future posts.

Sonamarg – The Meadow of Gold was last modified: October 21st, 2020 by Naman