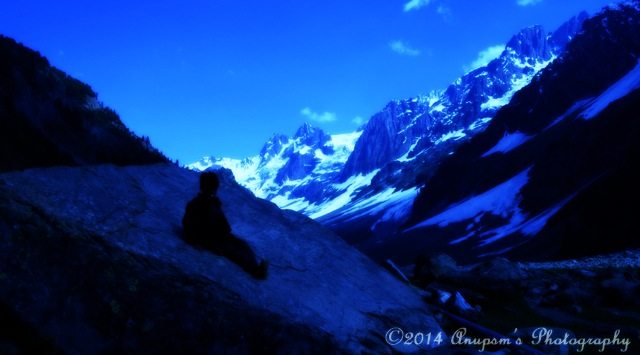 Sultan, the son of a Kashmiri shepherd, lives in a hut near the spot ‘Ram Teri Ganga Maile’. This spot is located just ahead of a view point where bollywood film ‘Satte Pe Satta’ was filmed. From there, the main attraction of Sonamarg, ‘Thajiwas Glacier’ is not too far, so Sultan goes to all these places with his sheep. On my way to the Glacier, I saw him running towards me. So I had to stop. He came, and smiled pointing my camera. Immediately we fixed a deal and the photo shoot began. In the end, I was happy with the photo above and Sultan was with a ten rupee note.

We were returning from our Amarnath Yatra and it was about 7’o clock in the evening we reached Sonamarg from Baltal. “Hello Ji! Please come, please come”, a middle aged gentleman welcomed us. He was dressed with a dirty shirt and pyjama. Hard to believe but true is that he is the owner of that hotel. With such a grand welcome we checked in the hotel. After a nice hot bath we took our dinner early and went to sleep. Next day morning we woke up and saw the land of golden meadow, ‘Sonamarg’, beautiful and mesmerizing.

SONAMARG or SONMARG literally means the Meadow of Gold. The name originated because the locals were impressed by the yellow crocus flowers in full bloom which covers up the valley in the spring and named the place as Sonmarg or Sonamarg.

On the bank of Indus (Sindh) river, Sonmarg is a small but picturesque resort town. It locates at an altitude of 2,740 meters above sea level and at a distance of 81 km North-East from Srinagar. The historical significance of Sonamarg is that it was the gateway to ancient Silk Route connecting Kashmir with Tibet, China and other countries of Central Asia. It lies on the Srinagar – Leh highway NH-1D. 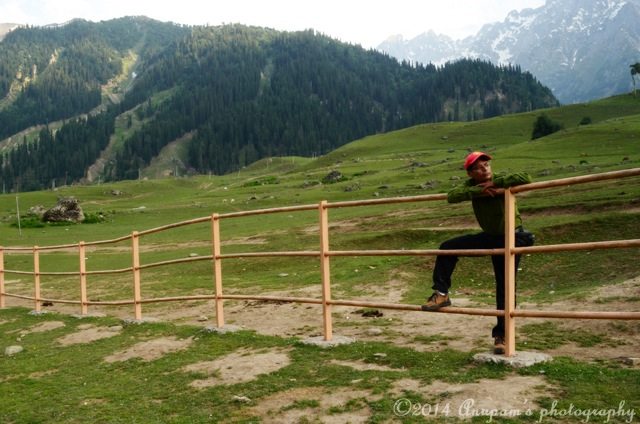 Beautiful Sonamarg and me

We went ahead and before we could feel the journey, were dropped at the first view point. A popular film of Mr. Amitabh Bachchan, ‘Satte Pe Satta’ was shot here. The film was a hit of 1982 and people here still associate it with this place. It is the film which they like, or the desperation to keep the view point alive with that film, hard to say! Many tourists of younger age might not have seen that film, and these Kashmiri young guides admitted not to have seen it. However, for younger generation to know, especially who follow Hindi movies, Mr Shah Rukh Khan’s film “Jab Tak Hain Jaan” was also shot here. But still it is “Satte Pe Satta” by which this point is known. The great Indian films! How they make spots popular and keep them alive for years! 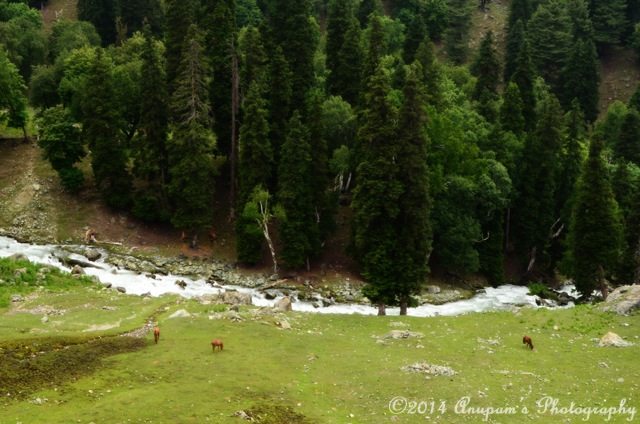 From there we went ahead and stopped near the view point “Ram Teri Ganga Maile”. It was the last vehicle stop towards Thajiwas Glacier. At this place, a string of stalls were selling tea and snacks, and here, one will be welcomed immediately by pony-wallahs, sledge-wallahs and boot-wallahs. These entire ‘Wallahs’ were also approaching us one by one and we were smiling with a big NO. However, one can please the pony-wallah by hiring a ride to the base of the glacier, the sledge-wallah if interested in joy rides on the glacier and the boot-wallah by hiring snow boots for walking on the glacier.

Suddenly, our cabbie who had no sympathy while overcharging us for the trip became a gentleman and suggested us not to waste money on these ‘Wallahs’ as we would easily go on foot to the base of glacier. Every pie deserves not to be wasted while on travelling, so we welcomed his advice. We started walking towards it and decided to see the ‘Maile Ganga!’ later.

Lo, behold! The Thajiwas Glacier! One of the most easily accessible glaciers! 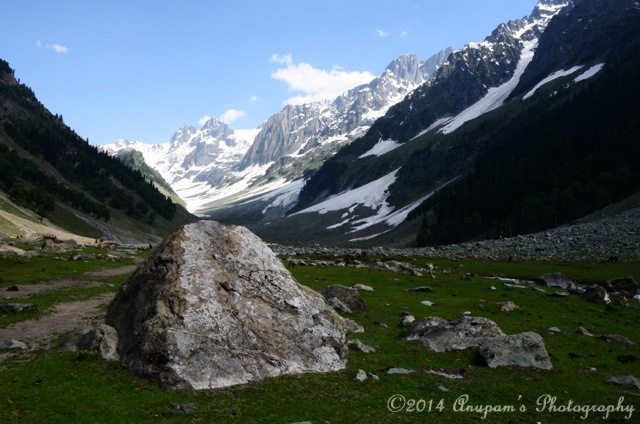 A stream was running down from Thajiwas Glacier. To reach its base one needs to crossover that stream. We crossed the wooden bridge suspended over the stream and reached the base of Thajiwas Glacier. We saw the mountain range full of snows. The snows of the glacier melted down, tourists were getting the pleasure of walking on it. Some were enjoying the joy rides on sledges and most importantly all of them were having the fun without going up to the peak. 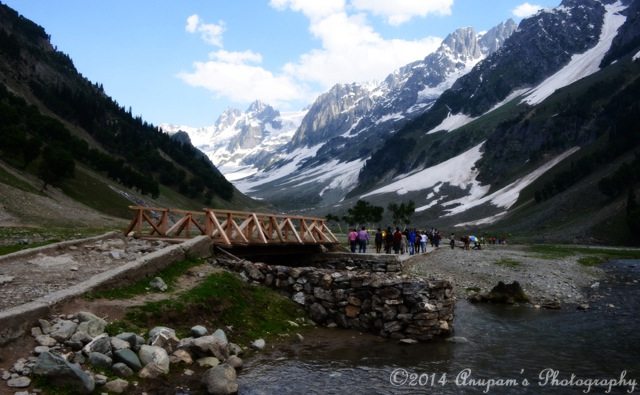 Wooden Bridge over a stream from Thajiwas Glacier

The stream from Thajiwas Glacier was flowing towards the spot “Ram Teri Ganga Maile” and we followed the same all the way to that spot. A popular film of the eminent film maker Mr. Raj Kapoor, “Ram Teri Ganga Maile”, was shot here and thus it became a view point. A small concrete bridge has now taken place of the one shown in film. 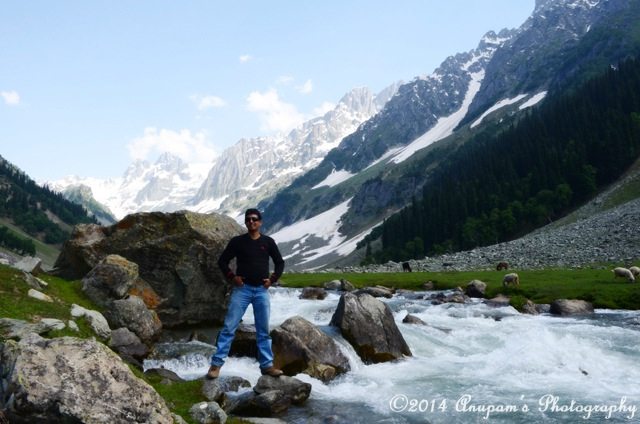 My friend Prabir near the stream from Thajiwas Glacier 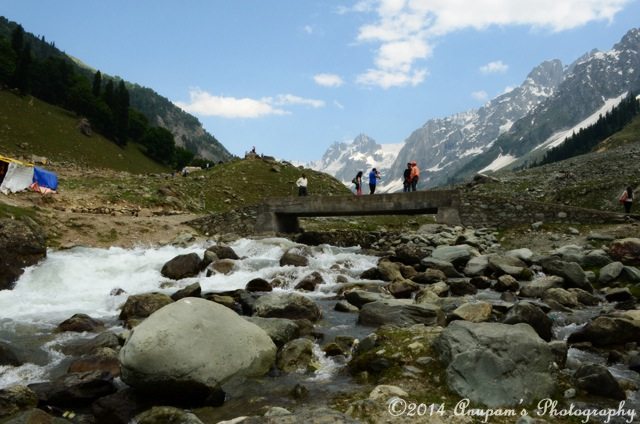 It was hard for me to accept it as a view point with the name they call it. But credit goes to Mr Raj Kapoor whose film made it a view point and gave a name for the locals to call it. The stream running from glacier was flowing under the bridge to a valley of shepherds. 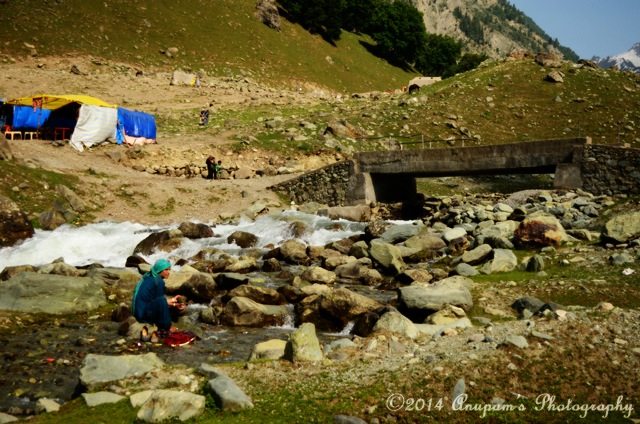 A Lady busy in washing clothes on the stream 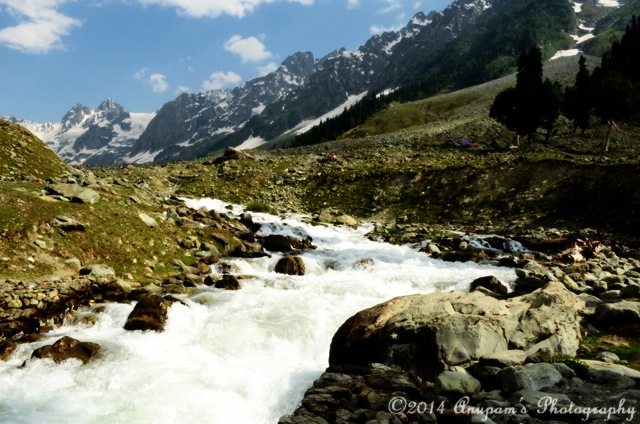 To me, it is another wonderful gift of Mother Nature to this heavenly place which we call ‘Kashmir’. From there, people were returning, but what I saw next was attracted me towards it. It is a plain land dotted with pine and fir trees and amidst those, live the Kashmiri shepherds. I went there and saw the traditional low height Kashmiri huts. The huts were made in a single row which further add to the beauty of that place. 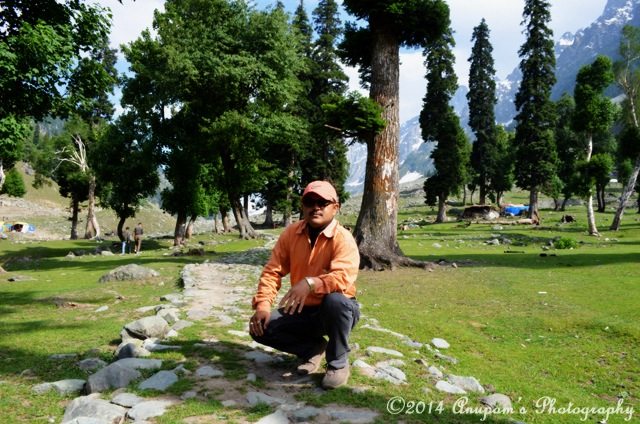 My friend Ranen in a vintage pose! 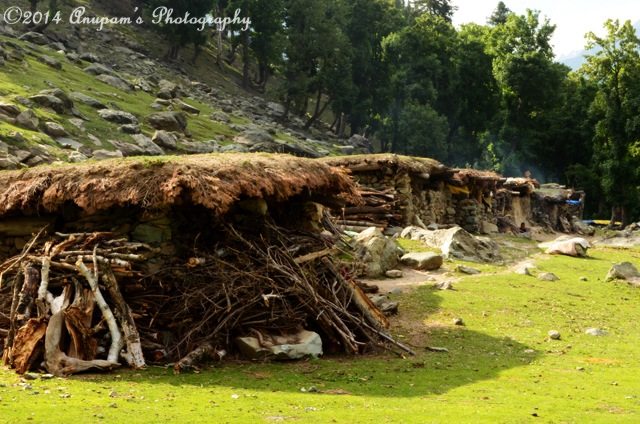 These traditional Kashmiri houses are the seasonal settlement of shepherds mainly in summer. They limit the cost of domesticating sheep at their villages by staying here during the summer. And in winter, when this place remains covered full of snows, they go back to their villages.

The days are long in Kashmir, about 16 hours in a day. It was 8.30 in the evening; sun went down and slowly moon started peeping over the mountain and soon flooded the valley with its glow. It was worth watching the valley from the top. 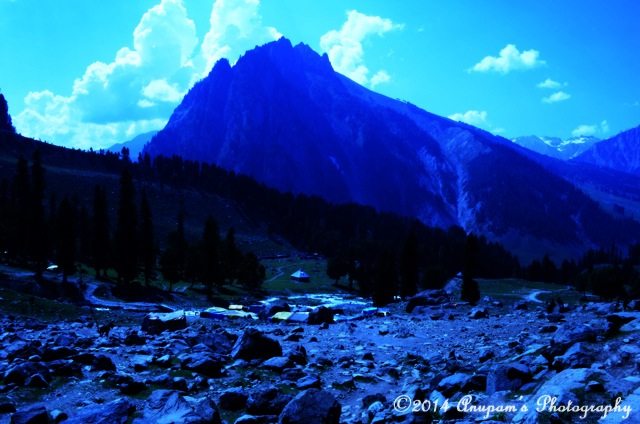 Valley of shepherds near the Glacier

It was time to return and bid adieu to the valley. Our cab moved fast to reach the hotel.

How to reach Sonamarg

Sonamarg is accessible only and only by road. The nearest rail head is Jammu Tawi which is located at a distance of 400 kms and is covered in almost 10-11 hrs by road. The nearest airport is in Srinagar which is around 81 Kms away from Sonamarg and it takes around 3hrs to cover the distance by road. Connectivity by roadways is good all over in Kashmir and one has many options of cabs or transports to avail.

My visit and stay

I am a newbie to this group and & had a real traveling experience on reading the post\stories by the members. This is my…