So folks we had been to Shankracharya temple and Mughal gardens in the previous post. Where we were to head next morning was not known to me even . I suggested that we should go to Dachigam sanctuary especially for the kiddy members of the party, everyone was more than ready. After inquiring from the owner of the guest house it became clear that passes were needed to visit the place and that would be available in the tourist information center located at Dal Gate end. O.K, NO PROBLEM FOLKS. So all members packed in Qualis we first headed towards the tourist information center where myself and Vishal very confidently asked the persons there to kindly issue the passes for the sanctuary only to get an answer that on that day Dachigam sanctuary was closed due to some V.I.P rush there. Why it happens boss? We had no back-up plan but perhaps the people whelming the affairs there had a certain back up plan for us.

Why don’t you people go to Kokarnag or Yousmarg Sir? was the advice or may be command given to us by the lady in charge of that place.

These are beautiful places sir. Gulmarg and Pahalgam have been done a lot on tourist circuit Sir. Go to Youusmarg or Kokarnag. I was looking at Vishal and he had just raised his hands sending the ball in my court. I hadn’t heard about these places at all.

Were those people trying to send us on an experimental trip ? or Those places were really beautiful? or The tourism authority of Kashmir was trying to hard sell these places were the thoughts encircling our mind.

Let’s ask the lady members of the troupe. I said to Vishal but no success as they left the decision to me. What to do man? As it was going o be last day in the valley I certainly didn’t want to ruin the day but by impulse I took the decision to proceed towards Youusmarg which was 47 Km south to Srinagar and on the way we could also stop at Charar-e-Sharif , the famous shrine of Rishi Nooruddin was an additional benefit of this troupe. 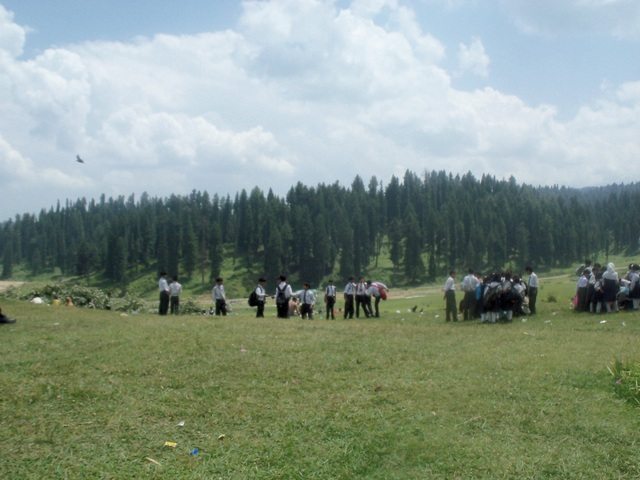 A VIEW OF YOUSMARG VALLEY. 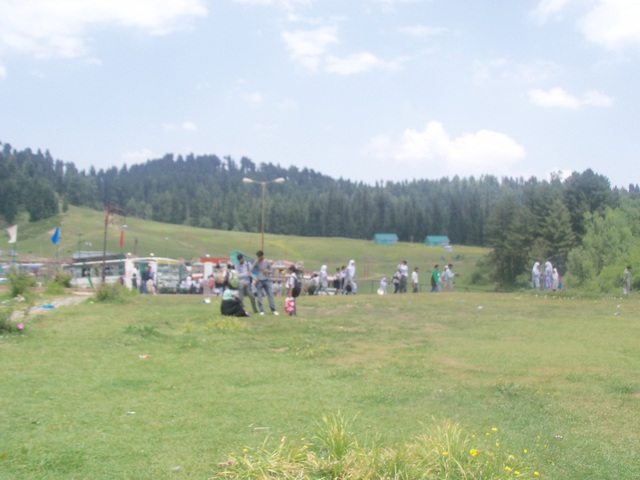 ANOTHER VIEW OF THE VALLEY

So, readers what do you think word ” Yousmarg” mean?

The meadow of Jesus , yes , as per some oral tradition Jesus lived in Yusmarg for sometime during his visit to Kashmir. Some even believe that Jesus is buried somewhere in Kashmir only. If anyone has read ” Rozabal Line” by Aswin Sanghi, he also has dwelled on this topic in his novel. Yousmarg is a beautiful meadow situated at the height of 2396 m from sea level and Pine and Fir trees are abound at this place. The place is under Yousmarg development authority and lies in Budgam distt. Yousmarg is no doubt, the quietest of all the tourist points of the valley , very suitable who want to enjoy the tourist place away from the tourists. Basically this place is a Trekker’s paradise as we found out after reaching the place. Many points originate from this place and one can trek all the way or go on mules to places like DoodhGanga and Nilnag lake. We decided yes not to go anywhere and just enjoy the serene environment of that place. The place has got a hotel operated by the tourism deptt. of the state  There were 7-8 beautiful hut like structures with green painted terrace which we came to know as the log cabins for the tourists which were to be booked in advance if anyone wants to stay there.  The place really mesmerizes the tourists as it happened with us  . (How we reached there  shall be dealt in another post?The place really is a picture postcard beauty and reminds you of the beauty of Alps as picturesquenessly picturised by Yash Chopra Ji. I thought that one can easily hum along the immortal lines from Kaala Bazzar, “KHOYA KHOYA CHAND , KHULA AASMAAN”  while strolling in the vast meadow. I strolled but didn’t sing though.  There I came to know that the place is a paradise for adventure tourism point of view as sometime tourists stay at that place for a week or fortnight for sheer trekking purpose . Some trek routes even take you to Gulmarg and Poonch from Yousmarg. This was out of question for we people with kids and ladies. Hamein to waise hi bahut mazaa aa raha tha.….. 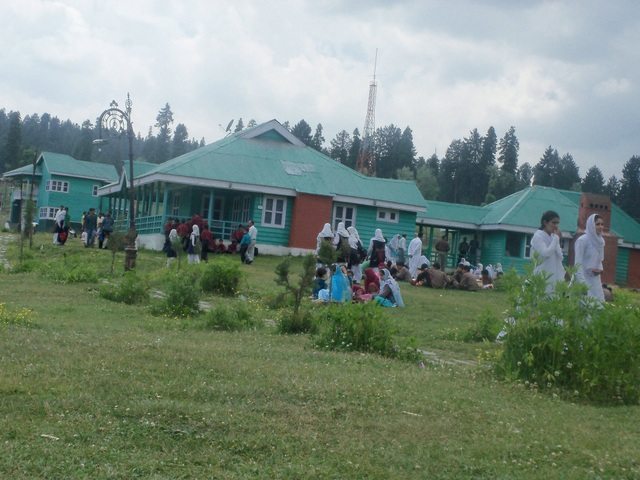 AMALGAMATION OF PLEASANT WEATHER AND STUDENTS 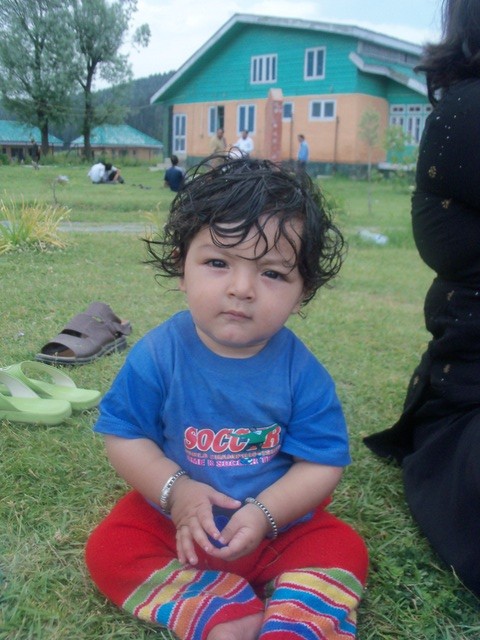 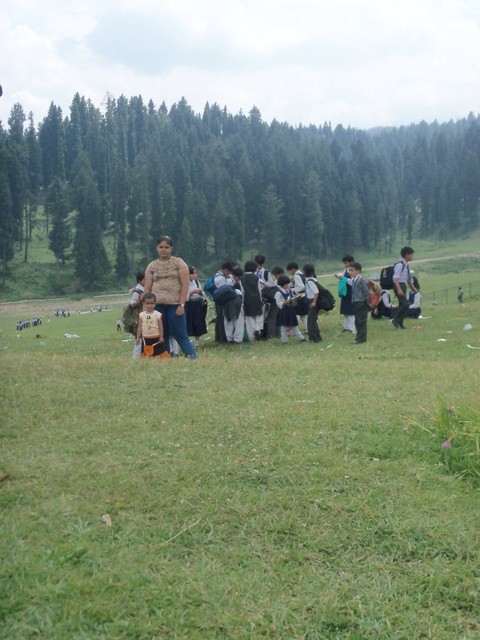 Another unique point , according to me , of this place was the picnic trips of schools, colleges and Kashmir university. The place might not be popular among the normal tourists but it was certainly popular among the natives. At least 2 schools were there that day and about 3 buses of Kashmir University people who had brought along gas cylinders as well as ration -paani along with them.

First of all the teachers and students of University offered Namaaz in a quiet corner of this serene meadow and afterwards got ready to prepare the meal.I think 2 main cooks were preparing the meal and 2-3 people were assisting them , meanwhile all other party members were engaged in a discussion sitting in nice rows. It was a beautiful scene though my heart thought about joining them and  have a lengthy talk but couldn’t break the inhibition.

Students from a school trip were constantly looking at us and giggling may be we were speaking in Punjabi and Hindi or may be our western styled dresses had caught their attention as almost everyone present their was in traditiona dress. Little girls even wore Hijab and had their heads fully covered not even heard in other parts of India where western school dress is synonym with good education and status symbol. Professors from the university troupe were also in Pathani Suits mostly. Sometimes it looks very nice that traditionalism still exists and most of the natives are not acting like caricatures (Brown Sahibs) as we have become more or less.After a lot of asking little girls readied themselves to have their photograph clicked along with Bhakti after due permission from their teacher. 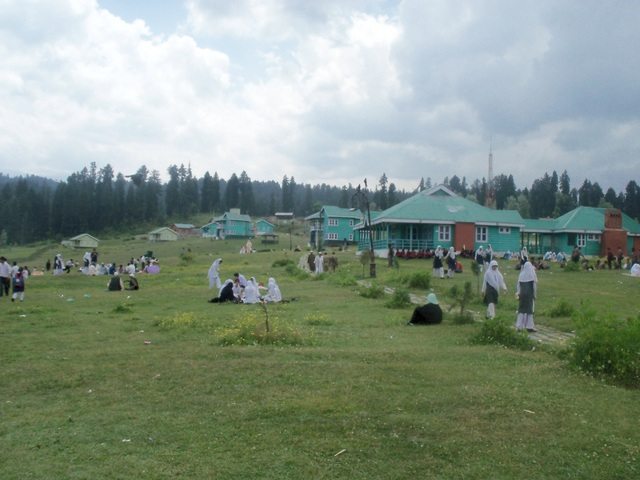 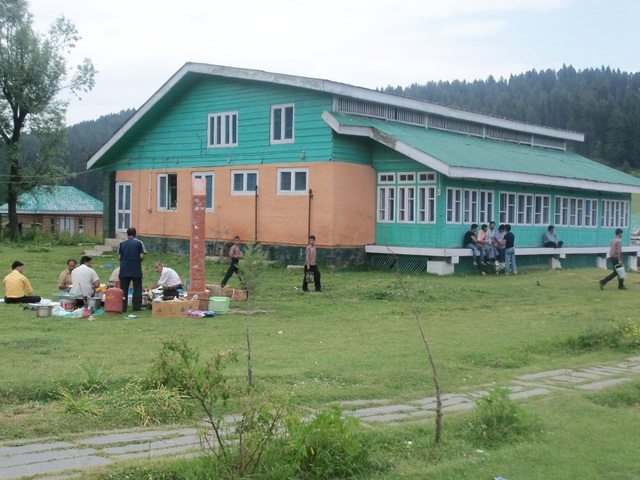 We stayed about 3 hours at this lovely place and then came out . All were feeling hungry now but no solid snack shop or Dhaba was visible there so just decided to have biscuits and ice creams and cold drinks. A Halwai shop was there and the specialty visible in that shop was a very big Poori like preparation , really huge which was not in actuality, a Poori. Maida was used to make that and it was deep fries which was being relished by the native people with Halwa over it. I think the dish is called Loochi and is more fair than Poori, shayad Kashmir ke weather ka asar ho……. 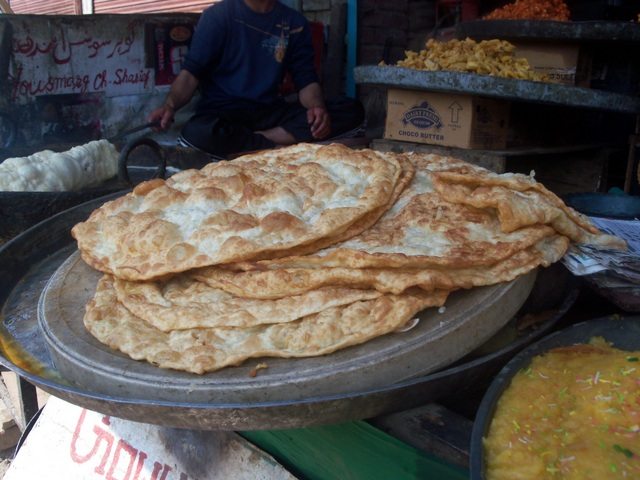 LOOCHI IN THE QUESTION, A COUSIN OF POORI

In our neighbouring country Pakistan also this dish is quite relished, Loochi and Halwa. We also experimented with it and a single Loochi was enough for 4-5 persons of our tasty, nevertheless it was a tasty fare. Now was the time to sit back in our vehicle and time too go back to Srinagar via Charar-E-Sharif, the revered dargah.
SIMPLY AWESOME YOUSMARG…. Meri Kashmir Yatra Part 9 was last modified: June 17th, 2021 by Rakesh

Once it came, there was lot of confusion about the number of buses, seats etc. and it ate away lot of precious time. We eventually got seats in the front of the bus. The bus then went around picking up people from RTDC hotels. Anyways, once everyone settled we began the tour. Our guide was an interesting character to be seen apart from the attractions. He wore a listening device in ear, kohl in eyes, safari suit with a hat and broken english. We visited Hawa Mahal but did not stop, then Jantar Mantar, City Palace and then a handicraft store.