The museum had an aura which was unmatched for in the Ashram and despite knowing many things about Gandhi Ji, one can not help discovering him more in the museum. There was much more to discover about him in the open space around the museum. 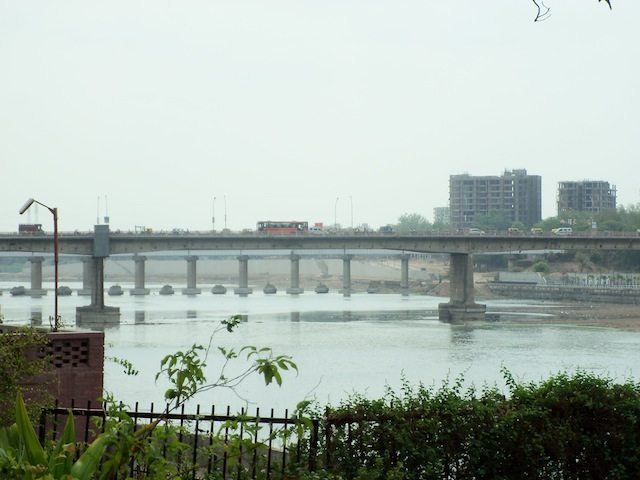 Sabarmati river as seen from the Ashram

Different structures were present there , huts and cottages reminding us all about Gandhi Ji and his associates who had lived there. 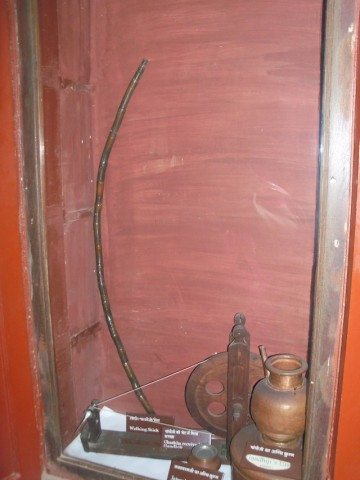 Some artefacts in the ashram

1. HRIDAYA KUNJ: Aptly named as such , this structure served as Gandhi Ji,s cottage having Gandhi Ji,s own room, Ba,s room and a visitor,s room. An open courtyard welcomes you along with that rare serenity associated with Gandhi Ji. A charkha, that symbol of so many revolutions welcome you heartily in the courtyard . In one corner lies a writing and reading desk. Volunteers of this Smarak help you there if you want to know anything. Open courtyard leads to the kitchen portion of the hut and then another open space leads you to Ba,s room as simple as the two personalities. Gandhi Ji,s room was locked for reasons unknown to me nor did I try to ask anyone if the room is opened anytime for the visitors or not. This is the place where museum was firstly located and later shifted to the place where it is now. 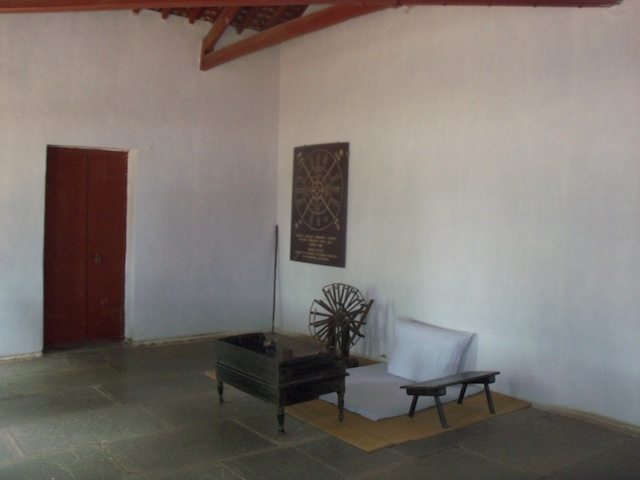 The serene atmosphere in the courtyard 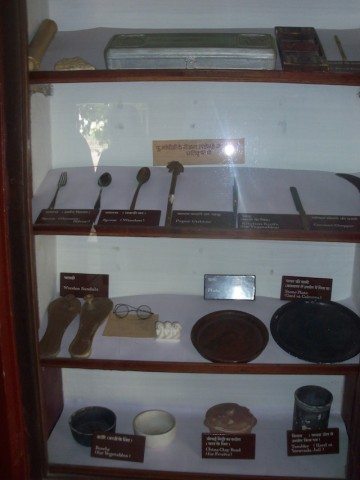 Some belongings of Mahatama Gandhi

2. VINOBA KUTIR: The cottage where Vinoba Ji, that crusader of downtrodden spent his years in this Ashram. Vinoba Bhave known for his land reforms in India had championed the cause of Gandhi Ji for many years and stayed along with Gandhi Ji in this complex for many years. This cottage later on served as home for Mira Behn. Born as Madeline Slade, she became an ardent follower of Gandhi Ji and remained so till his death. It sometimes amazes me that how a lady from a foreign land came to know about Mahatma Gandhi from French philosopher Romain Rolland and then became a devotee of Gandhi Ji, remaining with him in all the events of historical importance like round table conference, quit India movement.

3. UPASANA MANDIR: Prayer was not a daily ritual for Mahatama Gandhi albeit it was his life and he derived his energy from the prayer. Prayer can be done anywhere as per the theory that God resides everywhere still some places connect with the God instantaneously . Upasana Mandir, the open space in the premises of Sabarmati Ashram is such a place only , an open space on the banks of Sabarmati river giving the ambiance which must have been unparalleled when Gandhi Ji along with his devotees might have chanted RAGHUPATI RAGHAV RAJA RAM and numerous other Bhajans here. 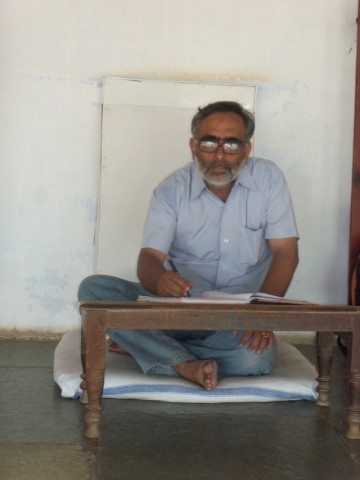 4. MAGAN NIWAS: This is the place where Magan Lal Gandhi, grandson of an uncle of Mahatama resided. He had gone to South Africa in order to earn his living instead became an ardent follower of Mahatama Gandhi. Various designs of Charkhas are placed here now.

Apart from these buildings , some other structures also exist in the premises which give a surreal feeling. Call it irony or simple business sense that exactly opposite to the Ashram exist a kiosk selling KINLEY bottled water solely, not the Swadeshi thing……

It was a wonderful time that we spent in the Ashram and our next destination now was the SWAMINARAYAN MANDIR (The main one). I was under impression that there were two temples of this revered deity in Ahmedabad, one the old and the ancient one at Kalupur area and other at Shahibaug road but while going towards our destination which was the main one at Shahibaug road, we came across another temple (SWAMINARAYAN only which was under renovation). I took it for the main temple bur after usual inquiry I came to know that the temple was a bit far away on the same road and shall come after crossing the NAMASKAR circle. (The roundabout where a golden colored artifact in shape of folded hands is located, may be indicating a warm welcome to the state of colorfulness.)

A BRIEF HISTORY OF SWAMINARAYAN SECT: Swaminarayan sect is the sect coming out of the branch of Hinduism, Vaishnavism only. Among the so many sects of Hinduism, this particular sect is quite dominant and popular in the state of Gujarat especially the urban centres. Born in 1781, as Ghanshyam Pande in Uttar Pradesh, he got initiated in UDDHAV SAMPRADAYA in 1800 by his Guru whence the new name of Sahajanand Swami. He taught the SwamiNarayan mantra to his devotees in 1802 and whence this sect was called thereafter as Swaminarayan sect. First temple of this sect was constructed at Kalupur in 1822 on the land given by the British Government.

TEMPLE at SHAHIBAUG: The temple here is a marble structured one and a very clean and neat atmosphere welcome you in the premises of this temple. Outside this temple is the famous Prasadalaya cum eating joint, Premvati Mishthan bhandar. This temple was opened by YogiJi maharaj in 1962. Five shrines adorn this temple. In front of the main shrines and idols are steel railings on an elevated platform where devotees sit and pray. When we sat down there as a family unit, a kind Gujarati lady instructed me that the place for the men are near the first railing and men and women have got separate enclosures for sitting. That was a fine arrangement though in most of the temples in North India such an arrangement is missing. It was Aarti time in the temple along with the Nagaras. It was my first experience in any SwamiNarayan temple and I also came to know there that the organization BAPS which manages the temple is also involved in charitable work and runs hospitals in Ahmedabad city and elsewhere. Whenever any celebration at a grand scale takes place in the presence of  His Holiness Pramukh Ji Maharaj, a lot of devotees from all corners of the world come and join the celeberation, I was told. Though the ambiance was new for me and my family here still the feeling that it was a temple filled us with a calm. 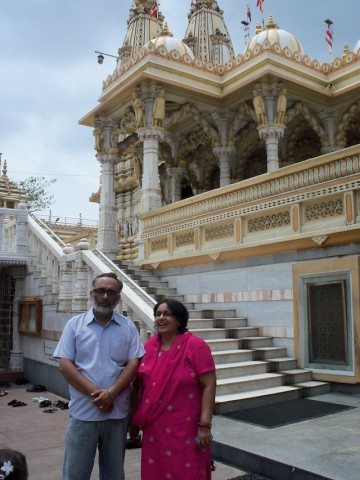 That lady from Ahmedabad and her husband were instrumental later on in telling us a market place called TEEN DARWAZA area when my wife chatted with them . They extended their hospitable spirit to the extent of giving their phone number also in case we need any help during our stay in the city. Thanks for the Gujju spirit.

Sabak Jo seekha Humne:  In theory always read about the diverse customs of India , in practical saw for the first time in detail and also that after all what matters is that we are Indians.

After our visit to Murdeshwar, we had a good night’s sleep and woke up early the next day. We vacated our hotel at 6…