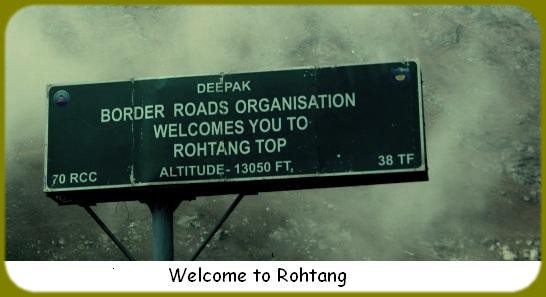 During our recent trip to Keylong/Lahaul, we came (or went, as you like) across Rohtang pass twice in as many days. Having spent a couple of hours up there and bearing witness to the grand, unabashed jollification all around, I realised that Rohtang Pass is much more than a mere pass. It is a full fledged, inescapable ‘destination’ for tourists from Manali and elsewhere.
At 3977 mtrs ASL, it may not be as high, as exclusive or as imitable as its bigger brothers in the area (viz. Khardung La, Kunzum La etc), but Rohtang Pass is certainly more celebrated. This is probably the only pass where a larger crowd goes ‘to’ it rather than ‘through’ it. We saw hundreds of 4×4 tourist vehicles, spread like snowflakes all over the barren landscape on both the days; and remember – this was supposedly the lean time at end of season! Reason enough, I tell myself, for Rohtang Pass to deserve an independent account rather than being clubbed among incidentals of larger journeys to Lahaul/ Spiti or Leh. 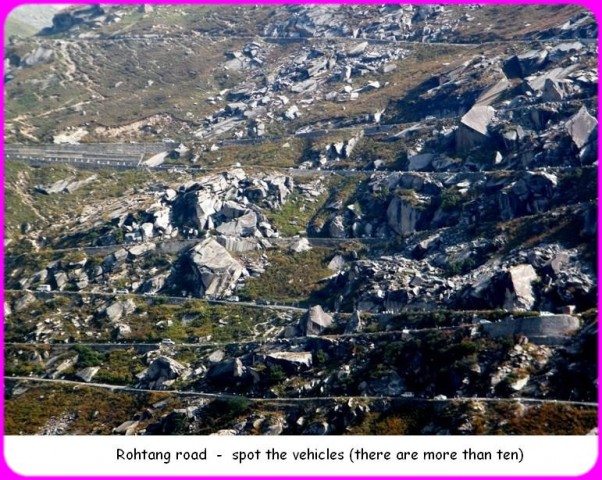 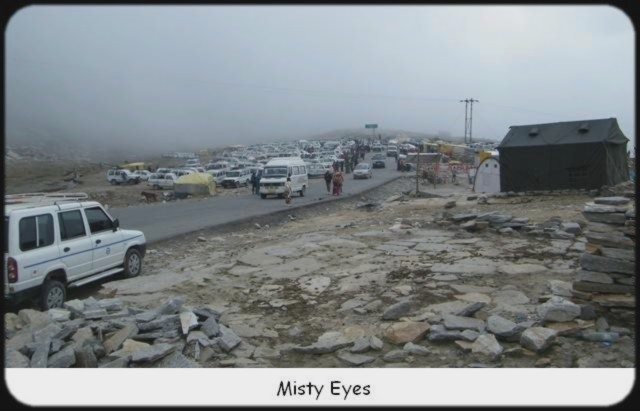 Background
Rohtang Pass (or La, Tibetan word for pass), located at a distance of 51 Kms from Manali gives access to Lahaul, Spiti and Leh sectors. The pass is open to traffic during approx. May/Jun to Oct/Nov every year, beyond which thick layers of ice devour the roads making it impossible to cross it. The pass has traditionally been an important route linking Kullu Valley to Lahaul/Spiti and further to Tibet for a long time. Rohtang in Tibetan means ‘place of dead bodies’ – signifying large number of deaths which have taken place here due to numerous skirmishes across the centuries for its occupation. In its current disposition, Rohtang Pass signifies crossover point from Kullu valley/district to Lahaul & Spiti district. 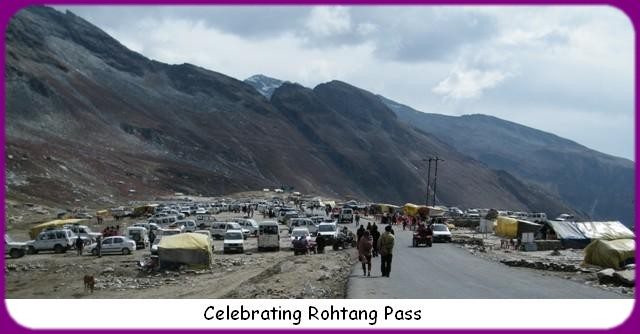 In terms of religious significance, it is revered by both Hindus and Buddhists. An igloo shaped temple, ‘Beas Kund’, denotes the origin of Beas. This Beas Kund is not to be confused with another one, at 4-6 hours trek from Palchan where Beas Kund is to be found in the form of a lake. These two sources of Beas give rise to two streams, which meet up at Palchan (Solang Valley) to form Beas. The place is also of religious significance for Buddhists. 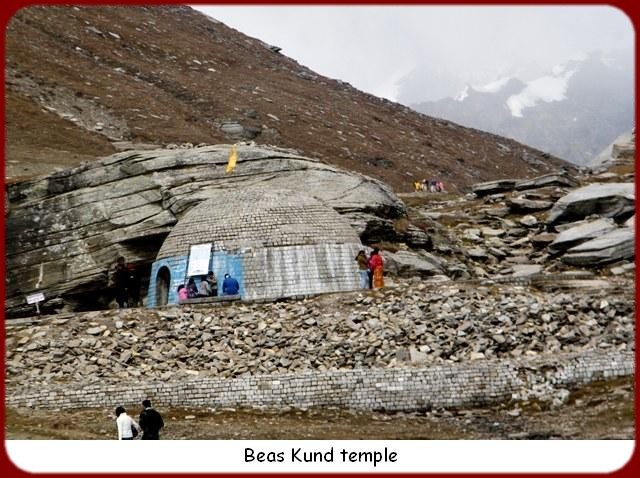 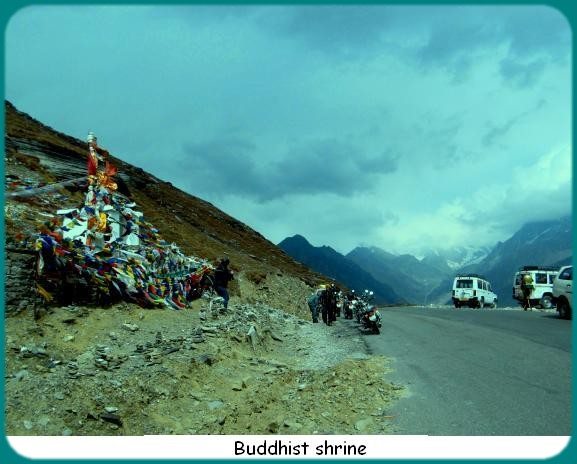 Foreground
Rohtang Pass has almost become a ‘must do’ for visitors to Manali. The pass can be reached by numerous state buses plying to Lahaul/Spiti or Leh (that is, when the roads are open). Else hire an SUV from Manali (full or sharing), which takes 2-3 hours to reach the pass, spend a few hours and then get back to Manali by evening.
The dazzlingly barren landscape of Rohtang Top comprises a very large flat area with abundant roadside parking space and maggi-pakora-tea providing dhabas. 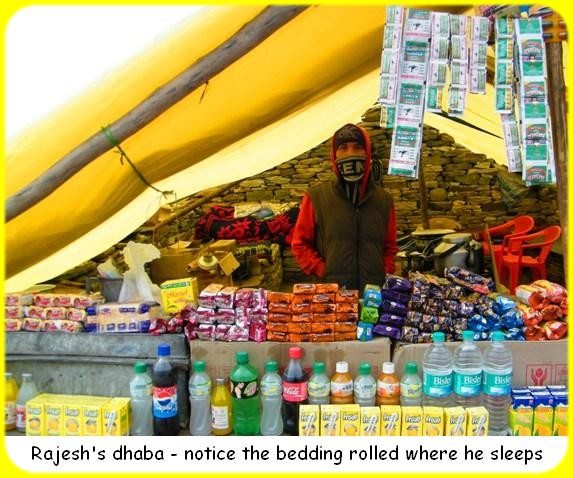 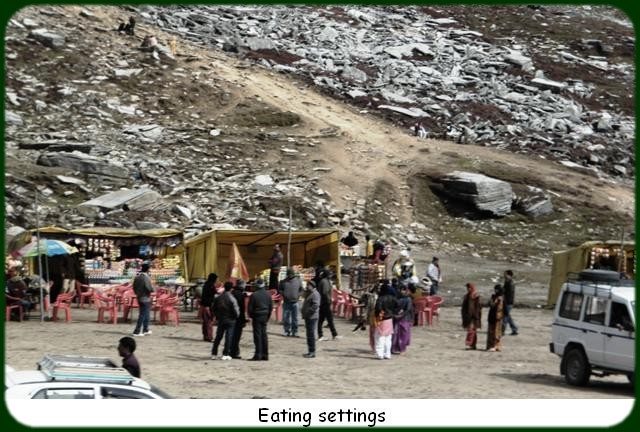 The landscape alternates between rude rocky and serene snowy, depending upon which period of year one is looking at it. Expect real freezing, high speed wind throughout the year. This being October, no ice was to be seen (reportedly though, there were some isolated chunks tucked away in faraway crannies; the horsewallahs were doing a brisk business of taking the tourists for a ride (?) to seek out such spots). Then there is temple ‘Beas Kund’, being visited by many tourists. If one moves further down the road, there is a Buddhist shrine with colourful flags fluttering invitingly. 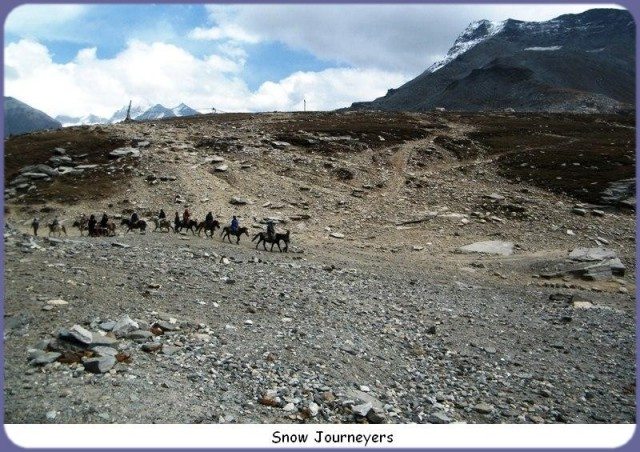 And of course, the Dhabas! A plate of Maggi for 50 bucks and a chai at 20 bucks may be a bit steep, but so is the place. Admittedly, the rampant crowd, jostling vehicles, hordes of animals, irrepressible mob of shilajeet sellers and such other elements do rob the place of exclusivity befitting a Himalayan pass at 3900+ mtrs – but that is how it comes, unfortunately. My advise to those unable to bear the melee of multitudes would be to drive further down the road, a few kilometres beyond and you are at your own solitudionous best.

Relief Settings
I cannot but resist myself from mentioning this – a 10 x 15 feet area enclosed by a prefab structure, on which someone has thoughtfully scribbled ‘Toilet’. Don’t get fooled by the pic below, usually you’ll find a long queue of relief seekers awaiting entry into the door – more so after all the jerks and jolts one endures arriving Rohtang. Hats off and a loud ‘JAI HIND’ to BRO for having thought of this detail. 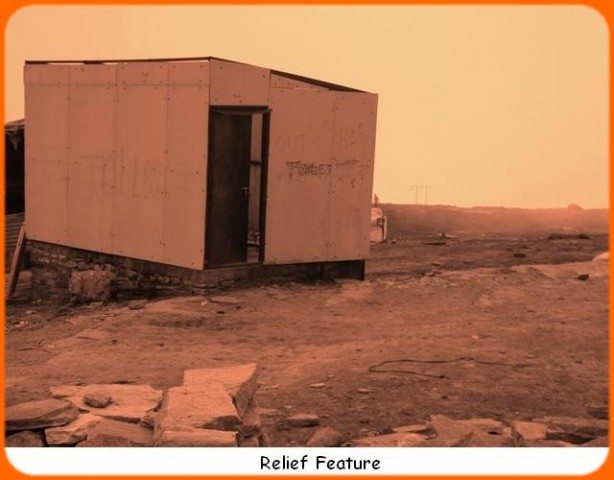 Road Review Manali-Rohtang
We undertook the trip (Delhi-Manali-Keylong) during first week of Oct 2011. The road conditions described or depicted here are conforming to this period. One should keep in mind that the condition and status of roads keeps varying through the year.

Route
Manali – 12 kms – Palchn – 5 kms – Kothi – 20 kms – Marhi – 10 kms – Rohtang Top.
The ascent starts soon after leaving Manali. Quality of road is excellent till Marhi. Kothi offers the last commercial stay option (a resort right on the roadside), after which the only stay options are PWD/Forest Guest Houses. Try to move out early from Manali for two reasons, firstly you can avoid the maddening traffic heading to Rohtang and secondly, you can travel at a leisurely pace through the stretch (it would be criminal to do a full throttle fly-past through this beautiful region). Thanks to the large touristy traffic, the route sees incessant flow of vehicles throughout the day (typically Rohtang bound traffic during first half of the day and Manali bound vehicles in second half). The green landscape starts giving way to raw, barren features from somewhere before Marhi. 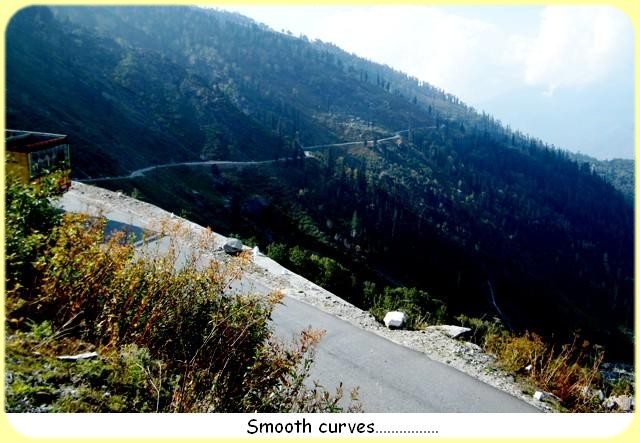 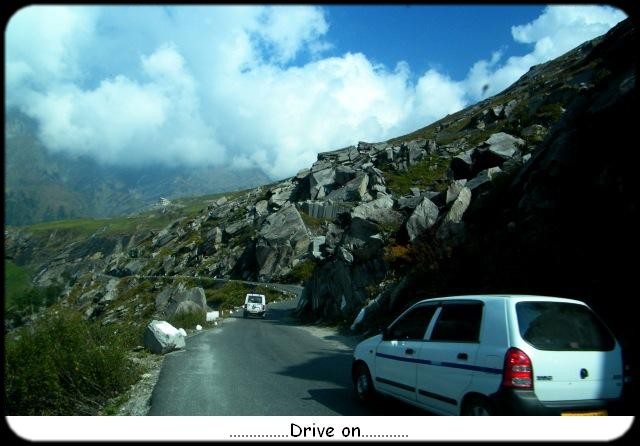 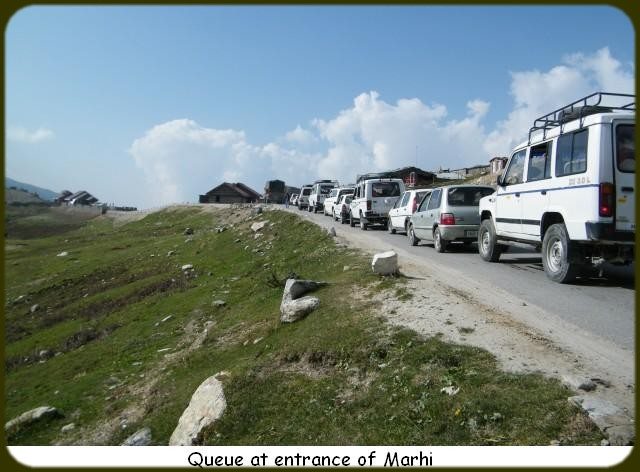 Marhi is a largish and last outpost on this route, comprising a number of dhabas and a temple. This is also the point where the action starts – the good roads end here. Now on, you are left to your will power and your vehicle’s shocker power to take you through sand-filled tracks, belly-scraping rocks and hairpin bends. Well I hastily add that any discomfort is adequately compensated by gratifying views of mountains brooding all around you. 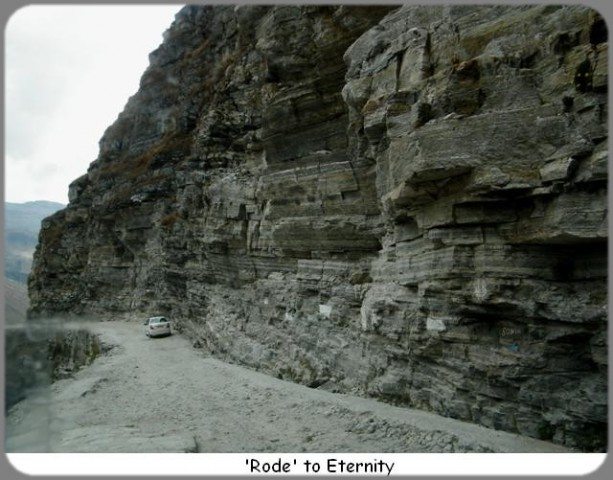 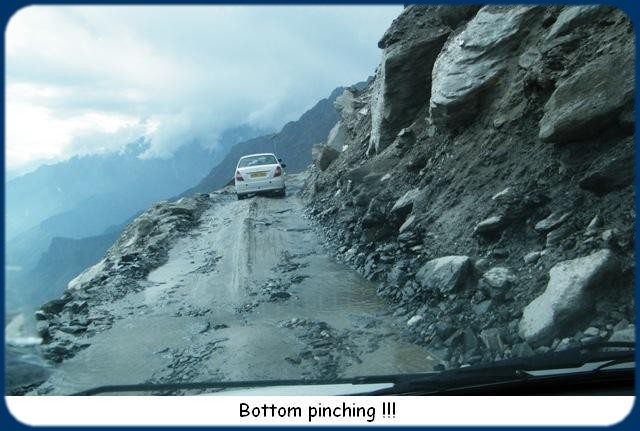 This state of road continues till about 2 kms short of Rohtang top, where extremely well maintained roads miraculously appear underneath to accompany you till the top. There are generally three types of road conditions one could expect in this area, as follows
1. Dry sandy and rocky route, which we encountered (October) and by far the best condition for small vehicles.
2. Wet and slushy (rocks hidden beneath slush). This happens during monsoons seasons, subsequent to prolonged rains and during opening of the pass. This is a tricky condition especially for bikers and low GC cars. In fact during middle of September, there was about a meter deep slush in some patches and only SUVs were running on this route.
3. Ice laden, somewhat similar to above condition, with small vehicles being more prone to skidding.
Another important feature in Marhi is the POLICE CHECK POST – current orders do not permit non-Himachal registered vehicles (any vehicle, hired or personal, whose number plate does not start with ‘HP’) across the check post. And the police are quite strict about it. In order to be allowed to pass, you need to have permission from SDM, Manali. This is a mandatory requisite for non-HP vehicles, which must be completed at Manali, prior to commencement of journey to Rohtang.
Though Marhi-Rohtang patch is difficult for small vehicles, quite a few Alto cars run by local taxi drivers were negotiating the passage (October – dry road conditions). Other point is that major part of the route is wide enough, so no scary passes/ heart-wrenching overtakes are necessary. Rani Nallah, located a few kilometres before Rohtang has a waterfall and could be considered for a brief stopover.

ENTIRE STRETCH FROM KOTHI TO ROHTANG IS CLOSED TO TOURIST TRAFFIC ON TUESDAYS. ‘ The rule is followed succinctly as no tourist vehicles, even local ones, plied on that day.

Snowscape
The pass is closed sometimes in Oct/Nov each year, as heavy snowfall starts clogging the area. There is no need for worry, yet (at least for them who want a tryst with boundless snow). After blockage of the top areas (viz Rohtang pass and surroundings), the snow gradually starts to cover lower reaches along the route. Thereon, Manali tour operators take tourists to such point up to which the road is open. Enticingly dubbed as ‘Snow Points’, they generally keeps shifting closer to Manali as winter deepens. On many occasions, guileless tourists are made to believe that snow point itself is Rohtang Pass or perhaps very close to it. Our first trip, we realised later, was not much beyond Kothi, where the roads were closed. However, on enquiry, taxi drivers had told nonchalantly, ‘ Rohtang pass to yahi hai, bilkul pass, par gadi nahi ja sakti.’ 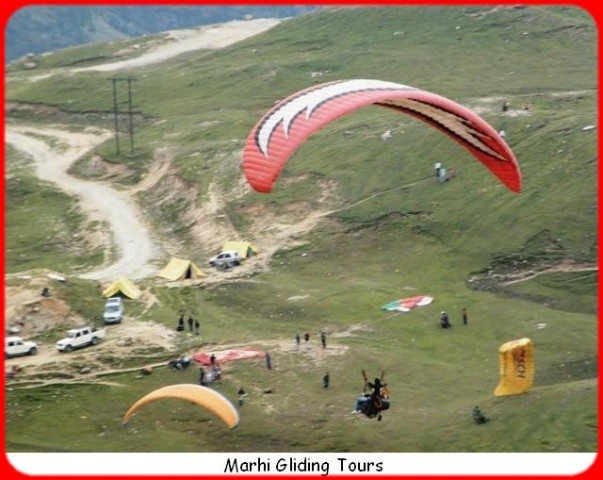 Futurescape
Work on Rohtang tunnel is in full swing and it is expected to be open by 2015. This tunnel, starting from Solang Nallah area will open somewhere near Sissu (short of Keylong) thus bypassing Rohtang Pass altogether.
Will Rohatng Pass still remain on tourist’s roadmap, or will it recede among numerous other, relatively unknown passes dotting the Himalayas. I won’t ever will so, if only for the sake of collective memory of all those who have been enthralled by the pass; dreams of those who would like to make a pass at Rohtang, not to mention the lives lost over centuries, which have earned it the epithet ‘Pile of dead bodies’. 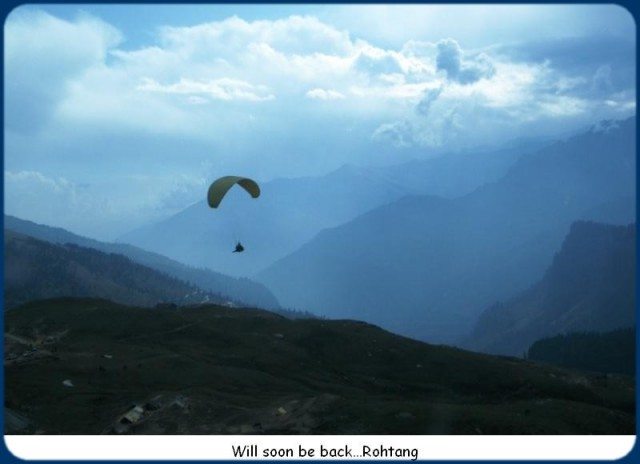 We decided to relax for couple of hours before we pay our visit to Puri temple. Finally we went for Darshan at 7 pm and it took us hardly 10 minutes get inside the Garbha Grih. Now here is the word of caution, the religious place is a house notorious panda’s and one has to be careful dealing with them. One of them took us to small room within the temple premise and forced us to pay him huge in order to get the blessings. Since we were well aware, we avoided that well within time and moved ahead. Such panda’s were there every meter, and they kept asking for donation in the name of god. Note: I am not calling them as priest as they don’t behave like.

The temple complex is beautiful from inside, having many small temples, very similar to any other temple in India. The structure is inspired by Kalinga art, and it is the highest temple in Orissa from the sea level. Details of origin and legend can be obtained from shrine’s official website.

In the evening we had an early dinner and went to sleep as the day ahead was packed with action.