Mount Shasta (White Mountain) is located in Northern California and is a potentially active volcano at the southern end of Cascade Range in Sisikyo County. At an elevation of 14,179 feet, it is the fifth highest peak in California.

I read about this place in quite a lot of books. The most recent book that I can recall having the mention of this place is “Spiritual Partnership: The journey to authentic power” by Gary Zukav. It is quite a mystic place and a destination for sages, spiritual seekers and curious people from all over the world. Also called the healing mountain, it is revered as the sacred place for thousands of years.

The drive to Mount Shasta is about 7-8 hours from San Jose. We started around 6 am from Milpitas (near San Jose). We decided to go to Lassen Volcanic National Park first and then visit Mount Shasta. 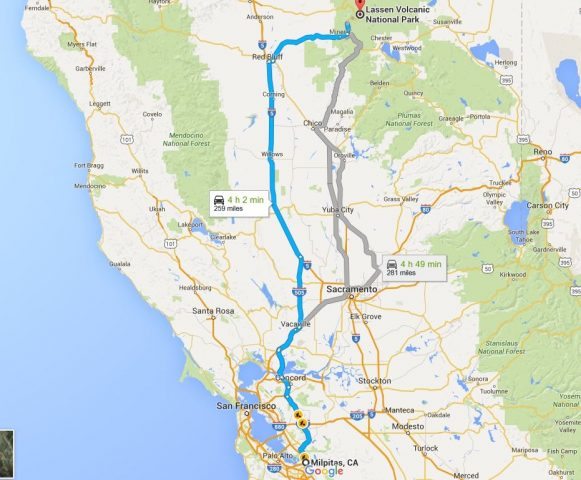 We took the route above and reached Lassen National Park around 12 pm. There are no signals in the vicinity of the park, not even in the nearest range 20-25 miles. We had printed maps which helped us figure out the way although the directions still confused us as this area is in an interior zone. The visibility was very poor and we were amidst the clouds. 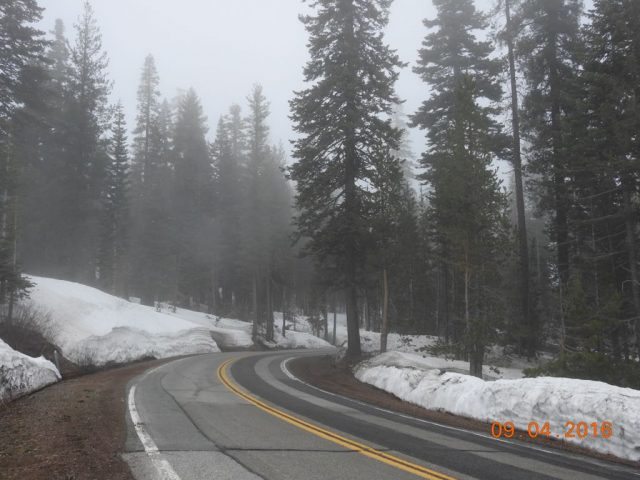 Lassen Volcanic National Park is home to steaming fumaroles, meadows with wildflowers, clear mountain lakes, and numerous volcanoes. Lassen Volcanic offers opportunities to discover the wonder and mysteries of volcanoes and hot water for visitors willing to explore the undiscovered.

The park was snow covered in the month of April and not all the areas of the park were open. We took a drive along the park. 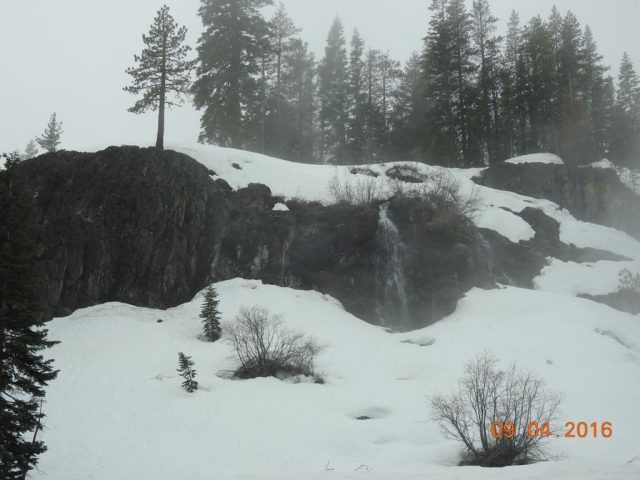 Waterfall amidst the mist

We were told by the park official that there is one clear water lake we could go to and then take the route to Shasta. It was Lake Manzanita. This was again a drive in low visibility zone amidst the clouds. 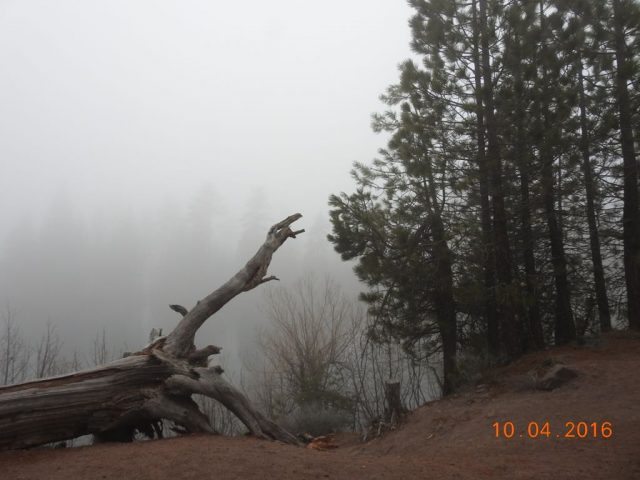 Lake Manzanita behind the woods

After this, we started our journey to Shasta. It was a drive of about 2 hours from Lassen National Park. We had a motel booked in Redding for overnight stay. This place was about an hour drive from Shasta.

We reached Shasta around 3.30 pm. It is a very small town and I must say a weird place. The downtown market had numerous gift shops but unlike any other place, these gift shops were actual selling crystals and angel miniatures. We entered into one of the shops, there was a lady at the counter. Curious at the ambience, I asked the lady about the mystery of the place. She told us that she had no intention of coming to this place and selling crystals but her inner voice brought her here and she is on her journey of inner experiences. She even told us that it has not been an easy path for her and selling crystals is just a source to sustain living. There are not many visitors to this place usually.

We bought few crystals and took guidance from her about the places and trails we could cover. We decided to take the Lake Sisikyo trail as this would give us an opportunity to trek and explore the place. 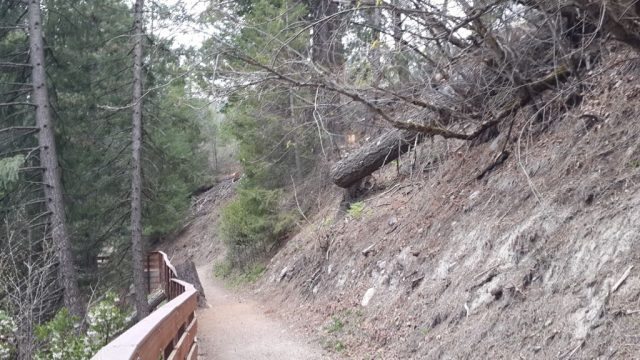 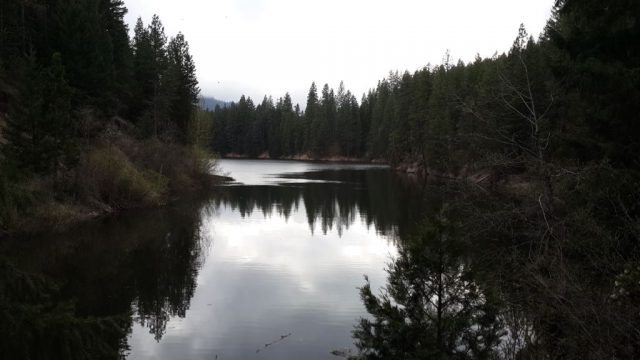 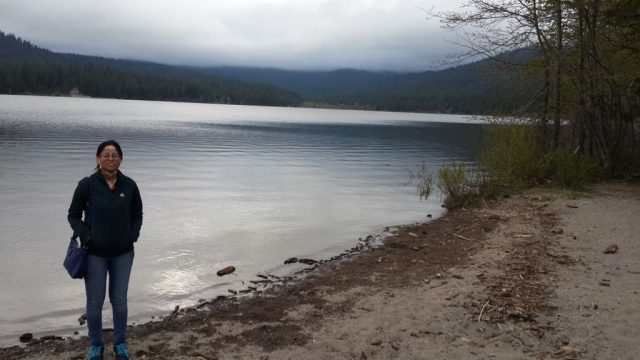 I could feel the strong vibrations of the place while trekking. It was a very positive experience difficult to describe in words.

The market in the downtown closes around 5 pm which is quite early. We could find numerous places for yoga, quantum healing, relaxation, and energy work as if this was the most prominent work the people of the town engaged in.

We left Shasta around 7 pm and reached our motel in Redding around 8 pm. The stay was comfortable though we did not expect much out of this place. The property owners also turned out to be Indians and we really felt good at the hospitality.

Next day, we left Redding around 8 am. We went to the City Park and trekked on Sacramento River trail. The scenic trail winds along the beautiful Sacramento River and links to the famous Sundial Bridge on the east end. This took us about an hour and a half to complete.

Around 10 am, we started our drive back to San Jose. We decided to drive along the coast and halt at Half Moon Bay. This City rests on the Pacific Coast between forested hills and some of the most beautiful coastlines that California has to offer. It is located approximately 28 miles south of San Francisco and lies within the westernmost portion of San Mateo County.

The drive along the coast turned out to be awesome with breathtaking views of the coastline. 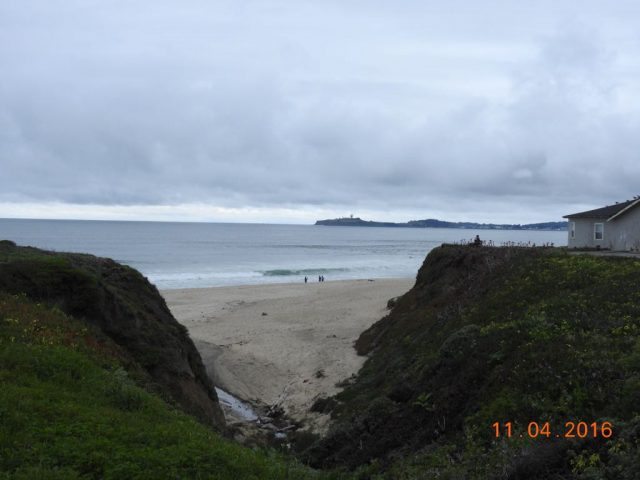 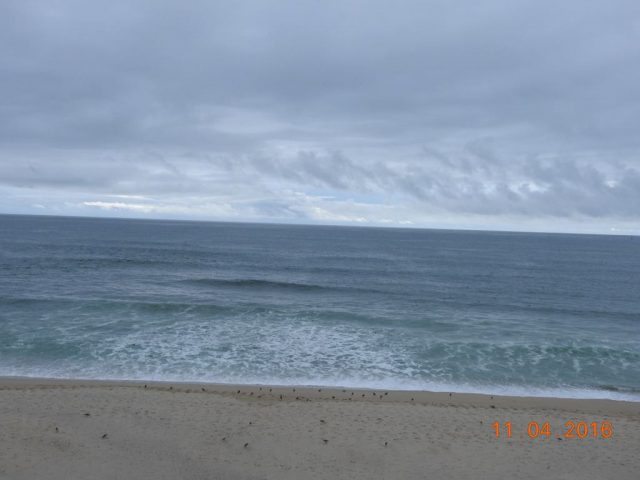 The main street has eclectic boutiques and antique shops, there’s something for everyone. Half Moon Bay encompasses a mix of old and new- local farm families live along with well-heeled retirees and urban expats who’ve only recently discovered this secret by the sea.

There are many fine restaurants in the downtown. We took lunch at a Thai Restaurant – Spice me Thai. It had a nice ambience and the food was just amazing. 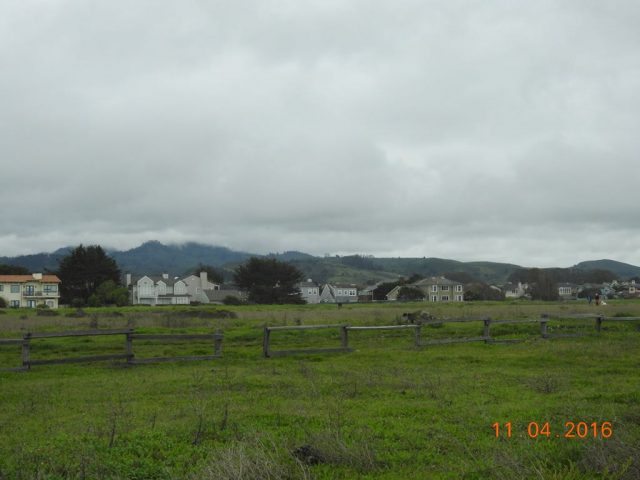 Stroll towards the beach, Half Moon Bay

Shasta and Half Moon Bay are some of the rarest places which now hold a special place in my memory. Shasta was amongst the places about which I had read in books and I could never imagine visiting this place in reality. It was like a dream come true!

I am working as a QA lead in one of the reputed companies in Noida. I love to travel and explore places. Besides travel, I like reading books about psychology, metaphysics and spirituality.

Then we thought to roam around the hotel, so we asked our taxi driver to take on a small ride around here and there. There was a small market with some J & K government cottages beside that market. Those cottages are for those who don’t want to stay inside the hotel. These cottages have their own kitchen where a family can stay and cook their food on own and can enjoy in the midst of nature.