After rolling smooth on excellent NH-8 & NH-8E, more than 4000 Kms in 11 days, we were bit skeptic about the condition of the State Highways towards Kutch. Dwarka to Bhuj via Jamnagar and Dhrol is around 420 km on SH-6 and via Porbanda and Rajkot on NH-8B is around 520 km. A bit confused, hence enquired the road condition on SH-6 from taxi drivers and tour operators to avoid 100 km extra plying. To our satisfaction, it was apprised by most that the SH-6 is quite well maintained due to access to the Oil City, Jamnagar. The India’s two largest private players in oil segment viz. Essar and Reliance are situated in Jamnagar at Vadinar and Khavdi respectively.

On the 13th day of our road-journey at 6 am, after bowing to the Lord of Dwarka, we started our journey driving along the banks of River Gomti to Rajkot Road. After few kms on Rajkot Road, a left turn on a single link road leads towards Khambhaliya on SH-6. The track was though single but hassle free. Passing by few villages, we reached Khambhaliya in no time. Khambhaliya to Jamnagar is a four lane state highway which is perhaps due to the oil companies referred above. At Khambhaliya, we stopped at a small eatery, which is rarely found on Gujrat roads. While chatting with the locales, we confronted an employee of the Forest Department. He informed about a Marine Sanctuary in Jamnagar, which is perhaps the only of its kind in India. He also insisted to visit the Khichadiya Bird Sanctuary located at 10 kms from Jamnagar. The proposal was too lucrative, hence we decided to visit both and stay back at Jamnagar.

To my surprise, I didn’t find any sign boards or indications on the road to reach the Marine Sanctuary, which was supposed to be 45 kms prior to reaching Jamnagar. More surprising was that none on the way could understand when we enquired about the Marine Sanctuary. In the process we paid thrice on the same toll booth by crossing again and again in search of the destination. Let me mention, the toll rates are much higher in Gujrat than in any part of the country. We paid Rs. 80/- each time, thrice, interestingly there was no provision of to and fro tickets. Irritated, yes! I was very upset with the hyped tourism propaganda of Gujrat. We decided to drop the idea of staying at Jamnagar, when finally I noticed a Forest Office on the other side of the road. Stopped the car, walked through the road and visited the office. The Ranger was luckily available and the gentle man, Mr. Thakkar, guided to turn right towards Vadinar and the sanctuary is located another five kms towards right from Vadinar at Narara. He further informed that the timing of visiting the Marine Sanctuary is upto 10 am only after which the entire Mangrove is inundated due to high tides. It was 10 am by then, hence we decided to stay at Jamnagar and visit the Bird Sanctuary rather and explore the Marine Sanctuary next morning by driving 55 kms on opposite direction. 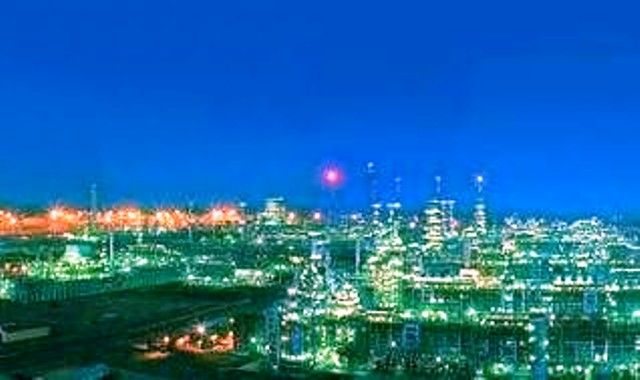 Jamnagar is the fifth largest city of Gujrat and situated to the south of the Gulf of Kutch. The economy and lifestyle as well as the infrastructures in the city are prominently due to the establishment of the world’s largest oil refinery by Reliance Industries and subsequently by the Essar Oil thus earning the sobriquet of ‘Oil City of India’.

Effortlessly, we found a very nice budget hotel with parking, near the prominent Saat-Rasta, a roundabout converging into seven roads. Unfortunately, the balcony of our room opened towards the main market, thus alluring my wife for shopping the whole lots. After relishing the appetizing north Indian lunch after few many days, I was quite satisfied. The multi culture and varied ethnic population has perhaps compelled the city to add the multiple cuisines. Obviously, due to the flourished private sectors, that attracted employment from Pan-India.

We were informed, Khijadiya Bird Sanctuary is located around 10 km from Jamnagar on Rajkot road, However, entry to the sanctuary has to be registered with the Forest Office in Jamnagar which closes at 2 PM. Bad luck, suddenly I remembered of Mr. Thakkar the Range Officer and called on his mobile, which was saved by me during our meeting. He was again too generous and asked us to reach the sanctuary and meet the officer with his reference. We did the same and before we would refer, the gentle man courteously allowed us in his cabin offering tea and biscuits. An entry permit was prepared for both of us mentioning the vehicle description. What to say, he also escorted us with a forest guard to move inside the park. The entry fee was perhaps Rs. 200/- for both and Rs. 100/- for camera. On the way towards Khijadiya and perhaps further on Rajkot road, you may find extensive cotton farming, another source of substantial economy of Gujrat.

“The sanctuary is unique having both fresh water lakes, salt and freshwater marshlands. It is spread over an area of 6.05 sq. km. Before independence, a check dam was built for storing the waters of river Ruparel just before it entered the sea. Over the years with fresh water of the rain and river on one side and salt water of the sea on the other side, a unique area was formed here. On the other side of the bund large creeks flowing from the Gulf of Kutch are located. These creeks supports mangroves and other marine vegetation while on land side of the sanctuary inland vegetation like Deshi babul, Pilu, Prosopis and others are found profusely. The sanctuary is located at the watershed of Ruparel river and Kalindri at the North East coastal region of Jamnagar district in the Gulf of Kutch and has a very special and unique ecosystem. Further, as sanctuary is located near Narara Island, therefore it also has a beautiful and bio-diversified coral reef. 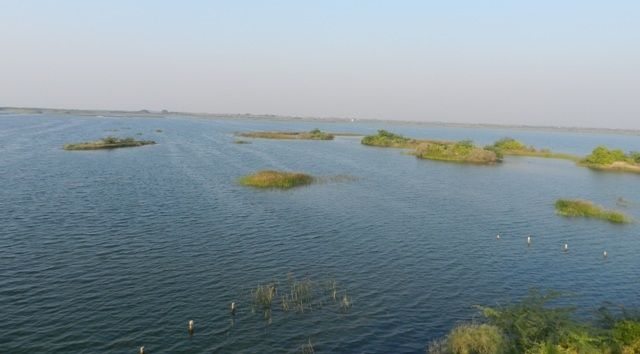 Extent of the Park 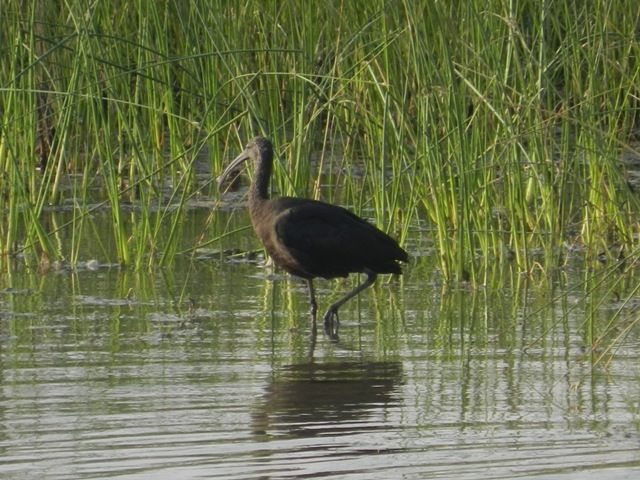 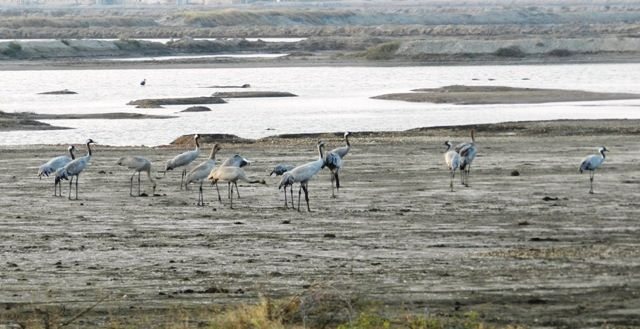 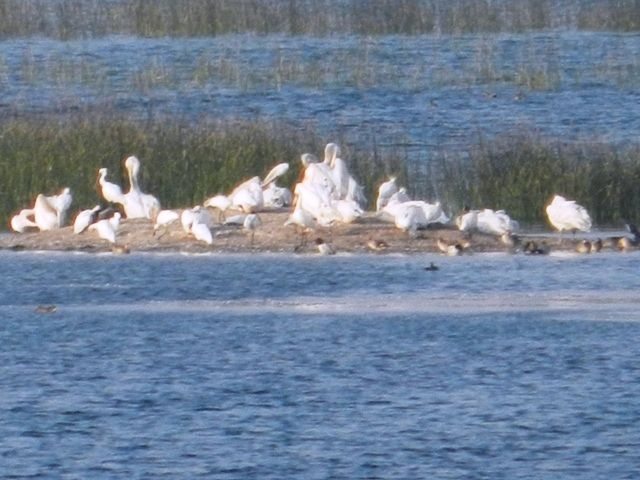 All three types of nests can be seen here, the ones on tree, on ground and floating nests on water. Here, varieties of ducks make floating nests. For instance, the black-necked storks, which are not found easily anywhere in India, are found here in abundance at Khijadiya.

According to reports available at least 257 to 300 types of migratory birds visit the Khijadiya Bird Sanctuary. The noted Indian ornithologist, Salim Ali when visited the sanctuary in 1984, reportedly sited 104 species on a single day.” 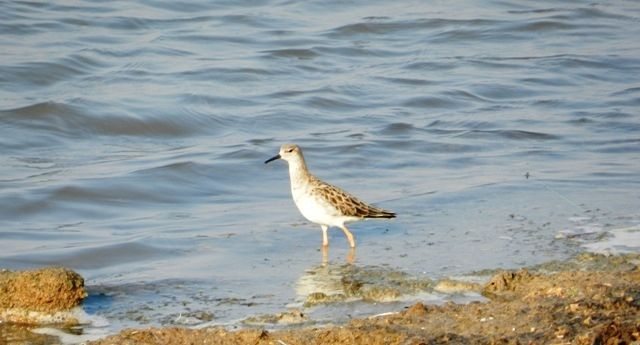 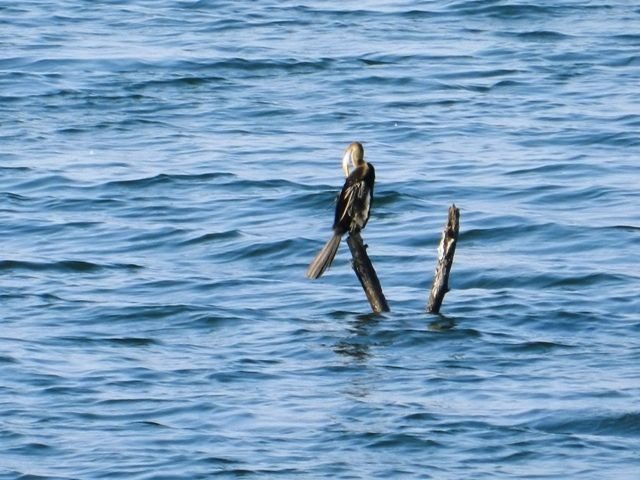 In my words, the location of the sanctuary is on the left turn, after crossing the junction of Jamnagar-Rajkot road and the Bye-Pass, after around 10 kms from Jamnagar on Rajkot road. Luckily, there was a sign board with direction towards Khijadiya in ENGLISH. A few kms, on the single dusty road through the thorny bushes, a large gate appeared on the left, which is the forest office. 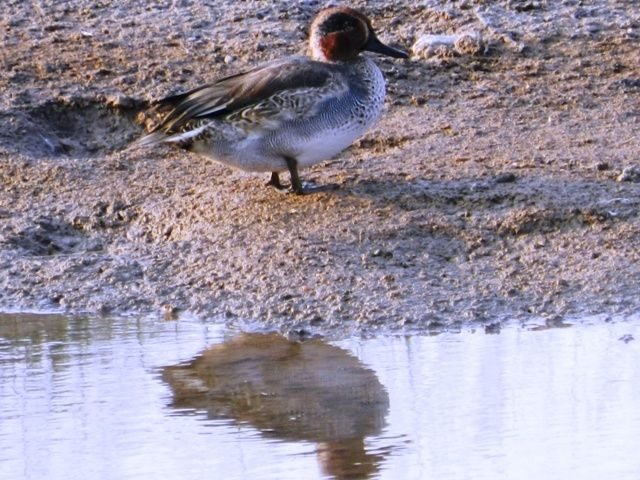 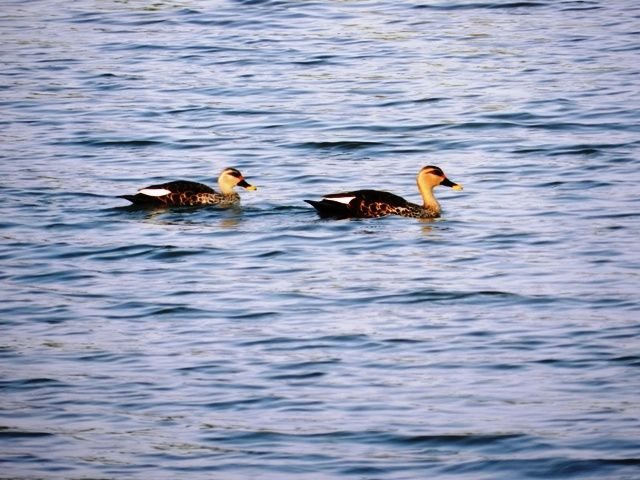 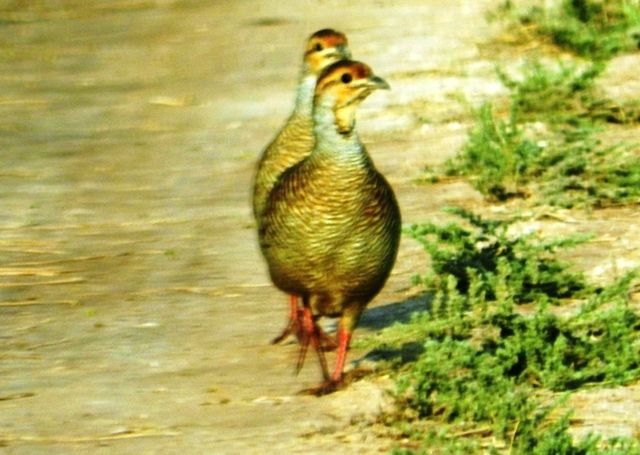 A few steps further are two tracks, one straight and the other on left. You may choose any but both have different landscapes housing varied species of birds and faunas depending upon their hospitability. We preferred the straight track and soon entered inside the sanctuary through dense thorny bushes bruising the car continuously. Let me alarm you, there are no trained guides neither any vehicles to venture into the park. The path is dense and narrow through thorny bushes that rub the car from both sides scratching the polish of the body of the vehicle very ruthlessly. 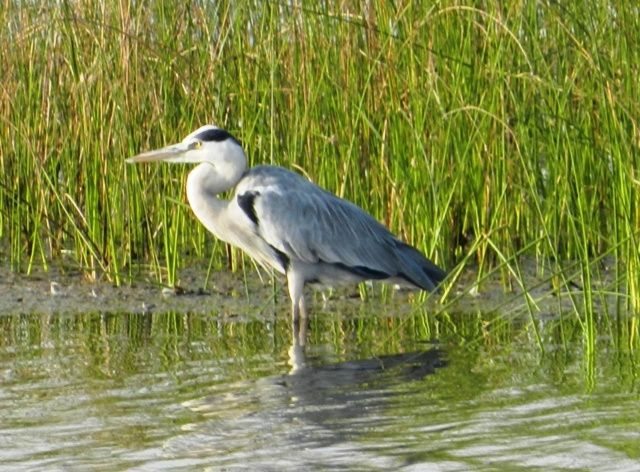 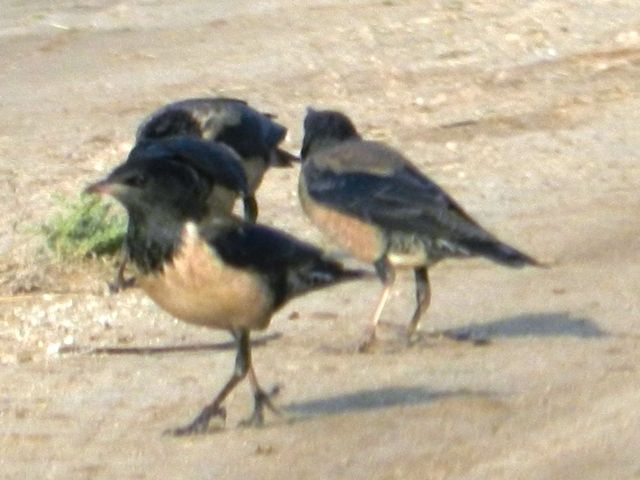 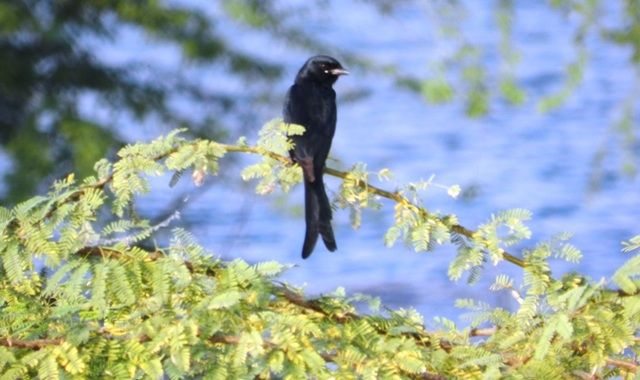 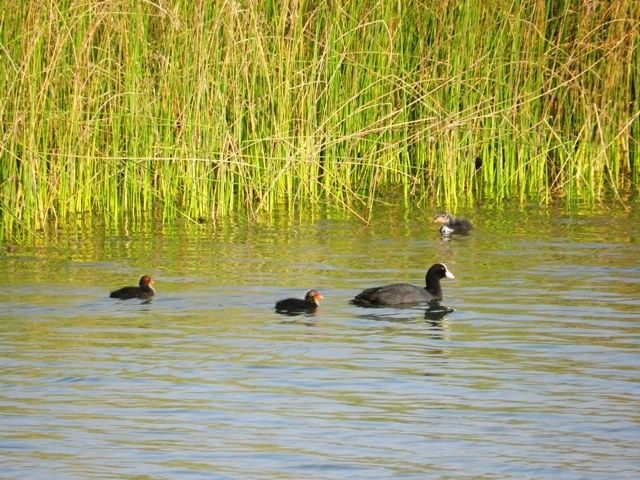 Excitedly, without caring I entered through the bushes and soon found a wide spread wet land with thousands of birds hovering, nesting, feeding, fishing and swimming. A dusty path on the right leads towards the wet land with ample water for the water birds for their activities. A little further is a watch tower where the track ends at the banks. The tower was almost abandoned, but the view around was so enticing that I cynically could not stop myself from reaching atop despite my wife’s skepticism. My extra-zoom camera captured whatever within range and my nature crazy mind was carried away with inveigle of ensnarement. 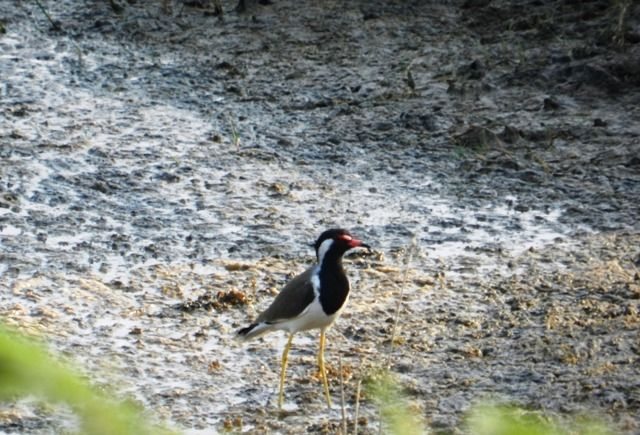 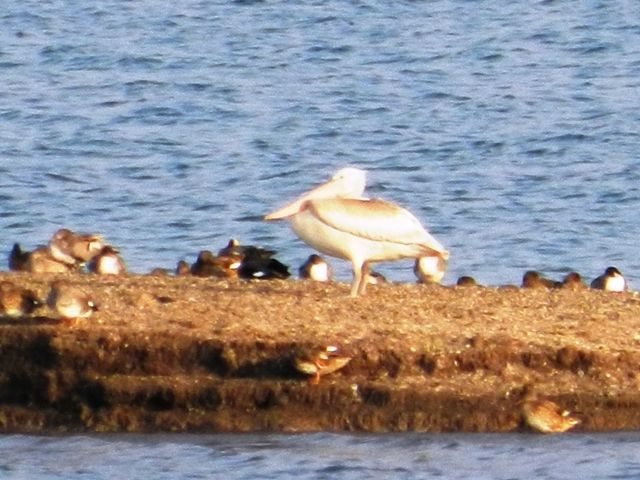 It is pertinent to mention that once you happen to visit the park, don’t forget to carry good quality binoculars and extra zoom cameras. Most of the photos clicked by me are on digital zoom, despite of 50x compatibility. It is wise to carry a tri-pod to avoid blurred results due to trembling on digital zoom. 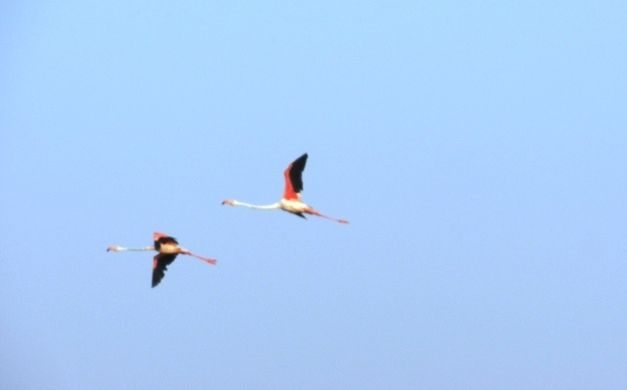 The park being too large, unlike Bharatpur, you can catch sight and frame the habitants only through high performance gadgets. The park closes at 5 pm hence we had to rush back, with a little time saved for the other site to visit, which as I told was on the left from the forest office. After coming out of the first entry, we entered the second track hurriedly. It was dusky because of denser and larger floras on this route. The landscape was marshy with patches of white dust which was rather salt sedimentation due to salinity. Few more species of birds, small dams regulating the flow of water and the thorny bushes were the general sights. 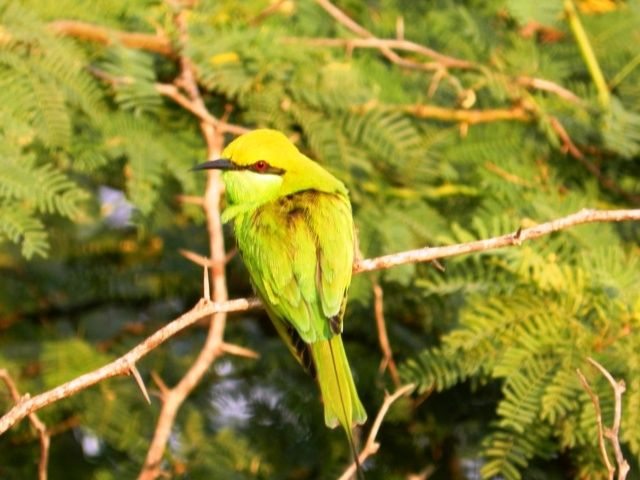 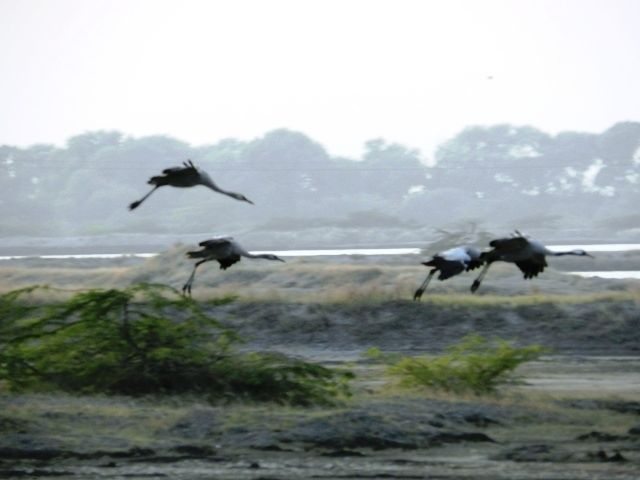 Least care being taken for improving tourist inflow or familiarizing the so natural and scenic spot by the concerned authorities. The forest office was however, a place to visit and quite well maintained. I feel, only very enthusiastic nature fanatics visit the park. We were the only visitors of the day perhaps, despite the fact that November end is an ideal season for bird watching and we found hundreds of birds in the sanctuary. 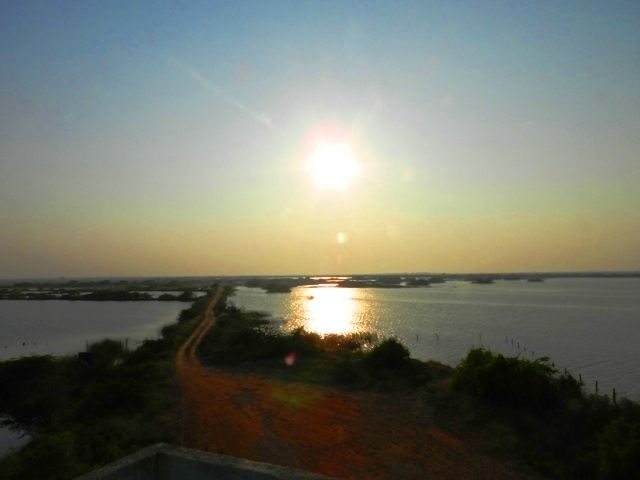 Sun Set a view from the Tower

When discussed with the officer in charge, we were apathetically told, that there are no such instructions of tourism development programs in their schedule. We conveyed our gratitude to the officer and the staff accompanied with us for their humble cooperation and left the spot until which it was almost dusky.