We got down from the car and after descending some uneven stairs reached the PadamSambhav Gompa.  The Gompa was colorful and mystic.  It was huge with traditional depictionof various symbols of Buddhism.  We climbed the long stairs and reached the courtyard of the Gompa. 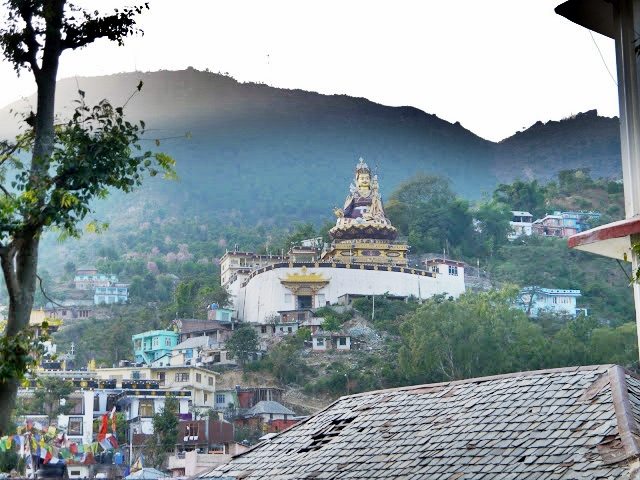 The  doors were closed and there was no one around.  We looked here and there and we saw a man and a woman stitching something.  I went upto them and enquired about the timings of the temple.  The budhist monk in broken hindi asked, if we liked to see inside the temple.  On our yes, he left his job and came with us to the Gompa…opened its artistic gates and ushered us in. 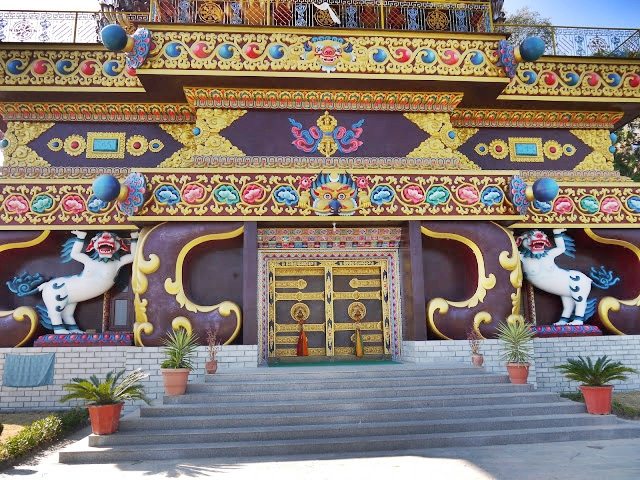 I asked him, if we can take fotos inside to which he readily agreed, saying it is not forbidden.   The main hall was big and colorfully decorated on all walls and ceiling. This was contrary to our temples where they do not allow any photography and all the photos are available outside shops for a prize.  I think this was initially done to avoid people crowding inside the temple, and be busy in photography but later it became a commercial practice.  Now when even photos with mobile phone can be shot, there is no logic in not allowing photography in temples.

Even in the Gurudwara of Rewalsar, they allowed photography.  Some temples in Uttrakhand also allow photography. 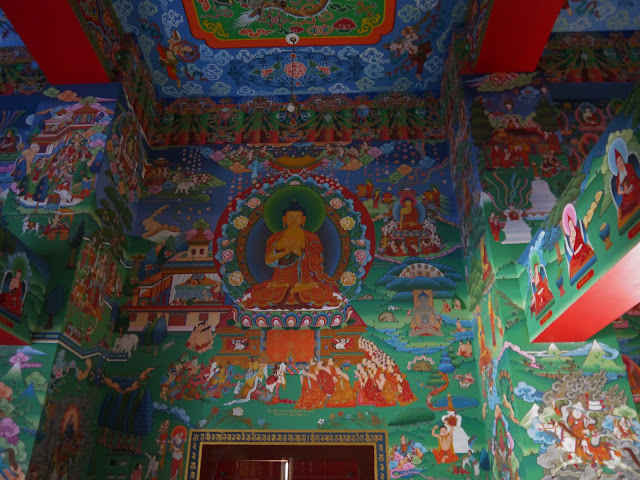 Colorful inside of Gompa

There was a brass statue of Lord Padam Sambhav in meditative pose.  We could feel the holy vibrations all around.  The management of the temple, the courtesy of priest and the overall cleanness of the temple put a question to me as to why we can not copy them in our temples.. 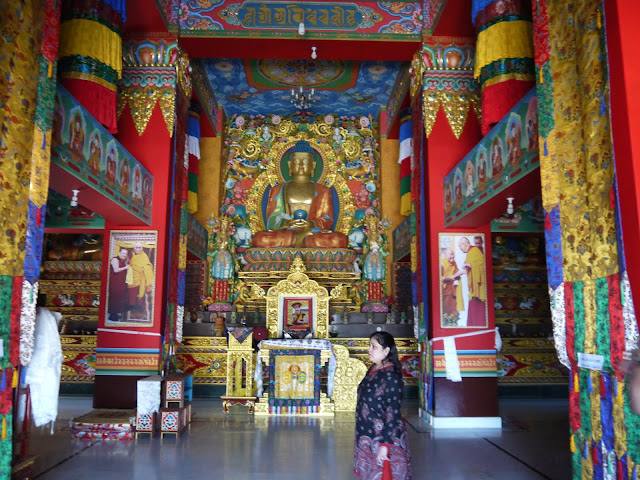 After spending some 30 minutes around the temple, we came out of the Gompa, thanked the Buddhist and started our journey downwards towards Rewalsar. 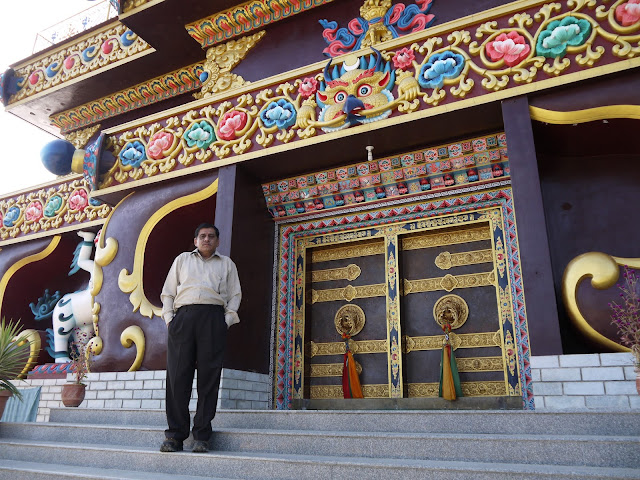 Yours truly before the Gompa

The Rewalsar Lake from the Gompa was beautiful, as if a green emerald has been fitted in lesser green emeralds. 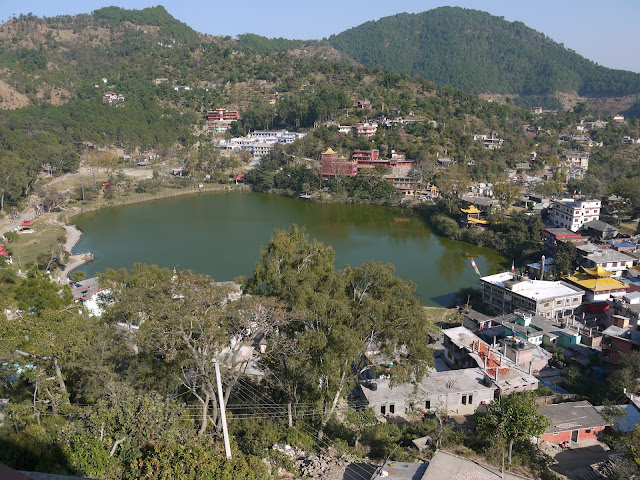 Rewalsar Lake as seen from Gompa

We came down and sat at a small restaurant.  Laxman’s wife wanted to have some Thupka and momos.  I had earlier tasted these tibetan items at Majnu Ka Tila, during my university days… but could not develop taste for them, except for the Chhung, which we enjoyed and then used to sleep in the room of our friend in Ramjas hostel.  The cook cum owner of restaurant was a local himachali, and when he brought the thukpa and momos.. I took a bite and made an ugly face… same happened with Laxman’s wife who had been eating thupka and momos in Delhi on regular basis.  We left them half eaten and came out.  So remember – Never eat Thupka and momos etc from himachali shops.. there are one or two Tibetan shops who are having better quality.  After this bad experience with Himachali Thupka, we started our journey around the lake 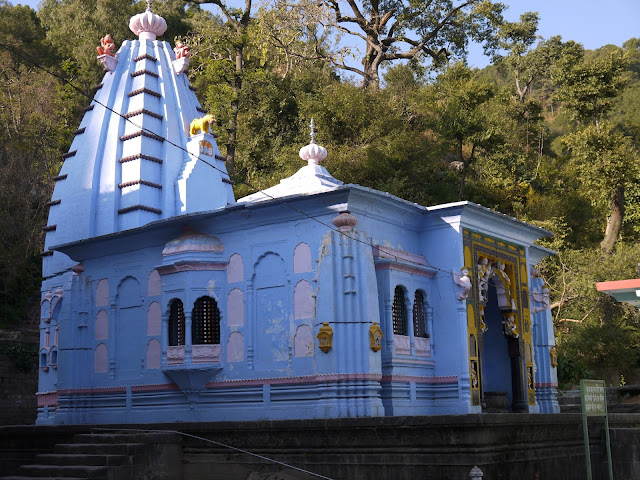 First came the Shiva Mandir, shivalinga of which was supposedly fixed by Rishi Lomash.  The temple was very old, but looking beautiful. 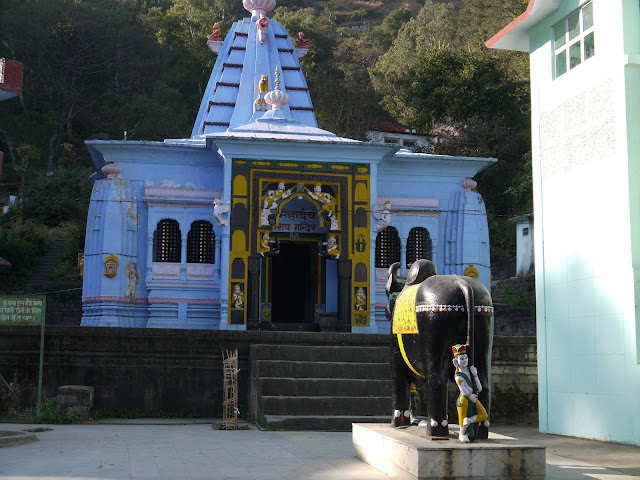 Another view of Shiva temple

The womenfolks went inside for a ritualistic worship, whereas I stood out shooting the temple.  Beisdes Shiva temple was a small but equally beautiful temple of Vishnu. 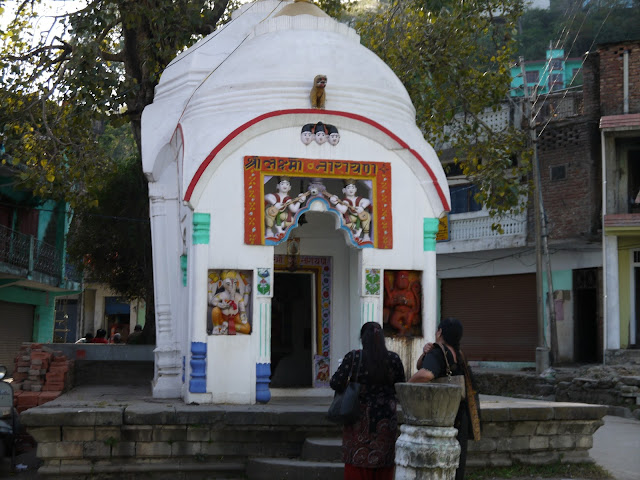 After Vishnu Temple, the road opened into a big area where we could see the whole of lake, with the Gurudwara in background and temple of Lomash Rishi on the shores of lake.  Lomash Rishi, as I wrote earlier was the first settler in Rewalsar. 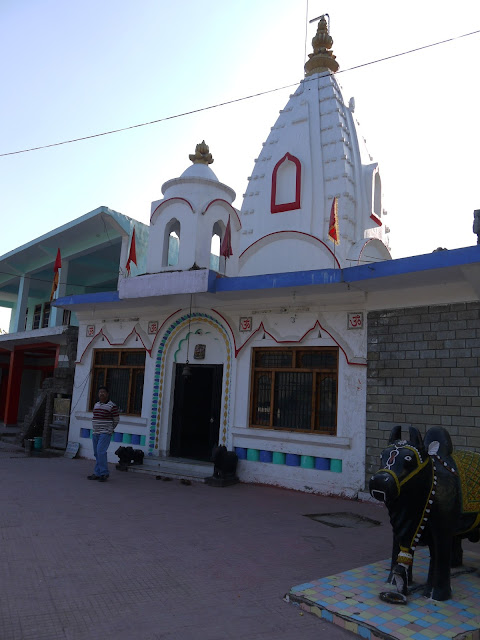 Lomash Rishi Temple on the bank of Rewalsar lake 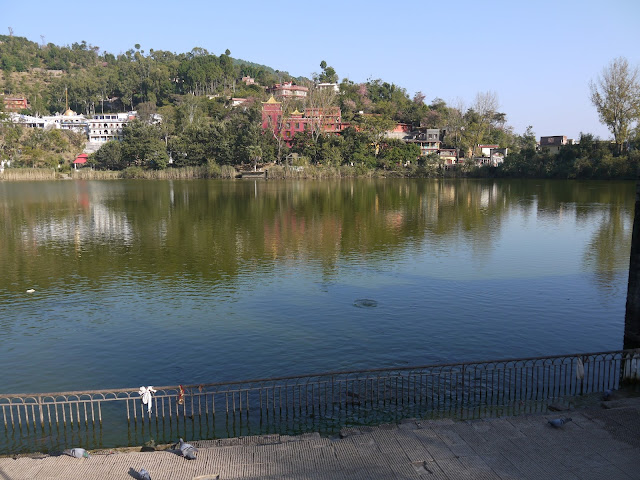 A view of lake from Lomash temple

The Rewalsar lake was also full with fish, some as big as 3 to 4 feet and all were competing with each other to get maximum food.  We also purchased some small biscuits for fishes and enjoyed their fight for the food.  There were 3 old widows sitting nearby and when we passed them, they all stood up and asked for some money.  My wife opened her purse and gave 100 Rs. to them asking them to distribute.   The sort of blessings they showered on my wife for such a small amount was unheard of. 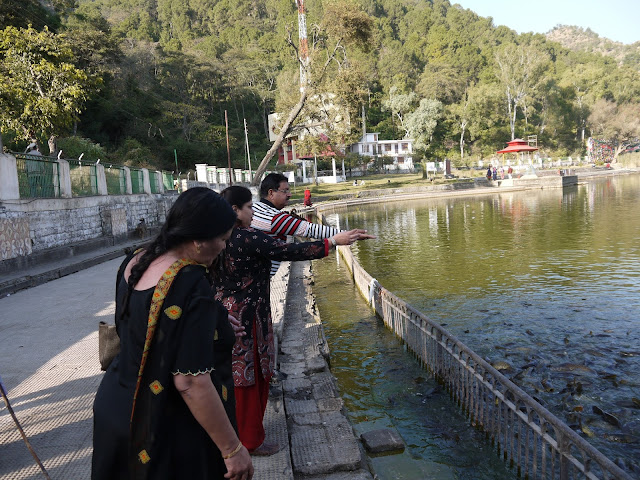 feeding fishes.. it is here that Bobby Deol fell into water in Kareeb

We were thoroughly enjoying the walk around the lake.  Every now and then, a group of buddhists would pass by us uttering some mantras.  It was later gathered that buddhists treat the lake as very sacred and it was a part of their daily meditation to encircle the lake in the morning and evening.

During March-April, thousands of floating candles are offered by people in the lake…. I can only imagine how beautiful it may look… however we can have a glimpse of that scene in the song of Kareeb (given in my last post). 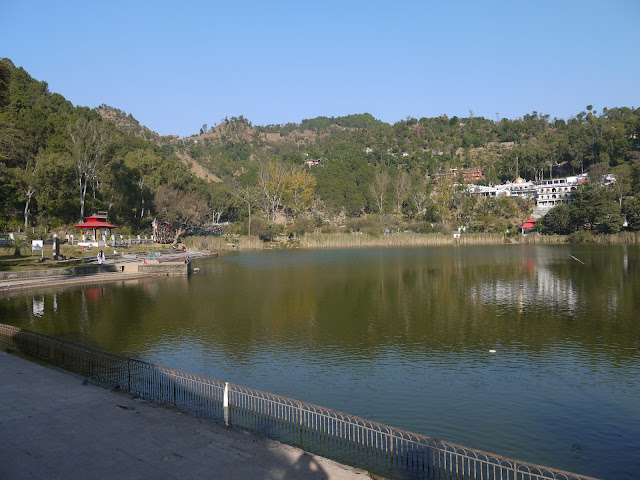 Another view of Rewalsar…opposite shore is Gurudwara

Halfway, we were a little afraid to see a group of monkey following us.  We stopped by a Rehriwala selling tea, who drove the monkeys away.  We ordered tea and stood there gossiping and eating mungfalis from his rehri.  Then an old lady came running to us.    She had highest numbered specs and was walking with a stick.  She came to my wife and told – you gave money to all buddhis there, but I had gone home for some work… and now those buddhis are not giving me part of donation… she had tears in her eyes with choked voice she pleaded for some money.  My wife took out a 50 rs note and gave to her…and the torrents of blessing started coming out of her mouth.  Laxman laughed – let us move fast because now the other buddhis will come and fight as why they were not given 50 Rs. each… LOL.

We moved further and came on the other side of the lake.  We reached the third famous place of Rewalsar – The Gurudwara.  Rewalsar is famous among Hindus, Buddhists and sikhs equally.  The stairs of the gurudwara were long and steep and none of us was ready to climb that high.  In Kareeb, these stairs have been shot many times, as most of the shots of hero and heroine are filmed on these stairs.  Someone  told that there is a gate a little farther from where we can take the road going up the Gurudwara. 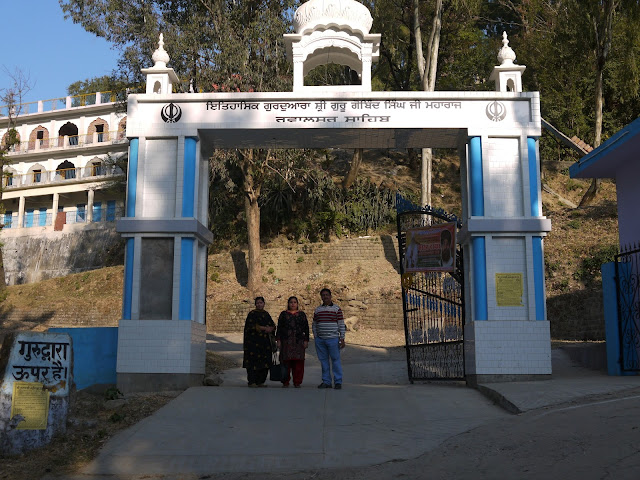 The Gurudwara was beautiful  and clean.  We entered inside.  Although it was not time for Kirtan, but the good sikh priest opened the temple and showed us around.  We bowed before Guru Granthh Sahib… paid some donations to the cashier and came out 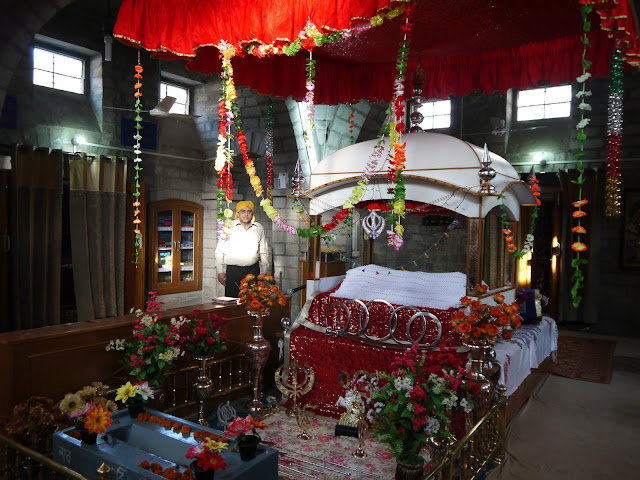 This Gurudwara was built by Raja Joginder Sen of Mandi in respect of Guru GobindSinghji.  Guru Gobind Singh came to Himachal to seek support from the hill kings, for his fight against the muslim invaders.  He chose Rewalsar as his camp site and had his meeting with hill kings and chalked out plans for a joint strategy against the invading armies of muslims.  Guru Gobind Singh ji was so impressed by the holy vibrations of this place that he stayed here for more than a month and later Raja of Mandi built this Gurudwara in his memory. 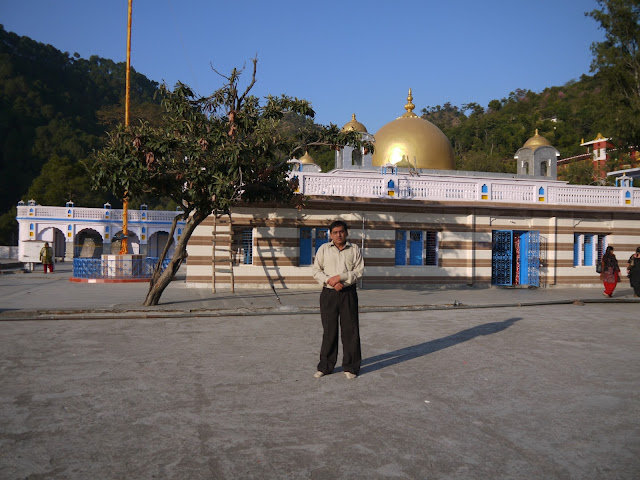 The view of Rewalsar Lake from the Gurudwara was magnificent.  We just asked the priest about the timings of Langar.  He called someone and ordered him to feed us immediately.  The other sikh told us… there is no time fixed  for langar and we can have it anytime.  If the food is finished they would cook it afresh for us.  We were really moved by this kindness and good gesture.  We thanked him and despite his persuations to have some langar, moved forward. 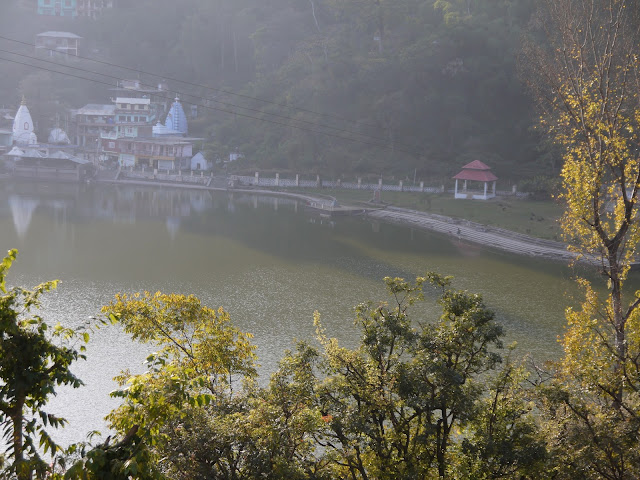 A view of lake from Gurudwara 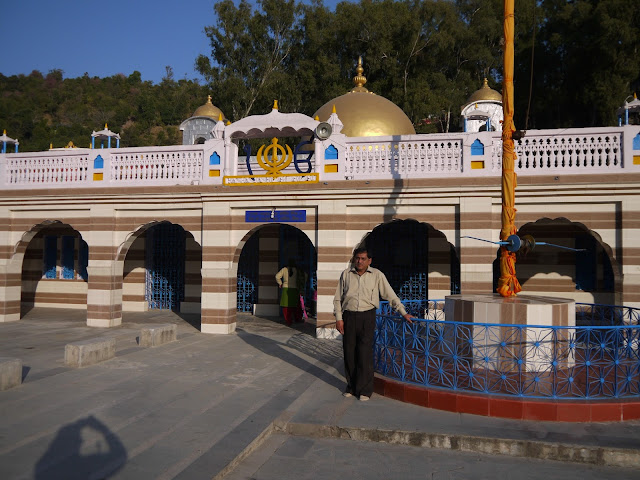 The view of Rewalsar lake was again mind-blowing… the sun setting and the reflection falling on the water, with Shiva temple in background was something that has to be experienced not read in a log. 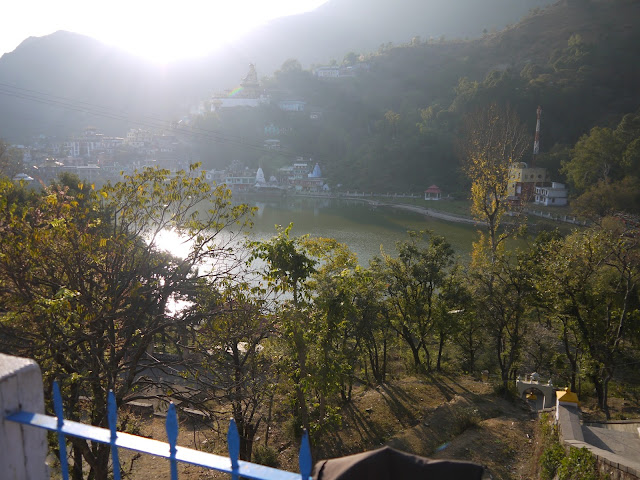 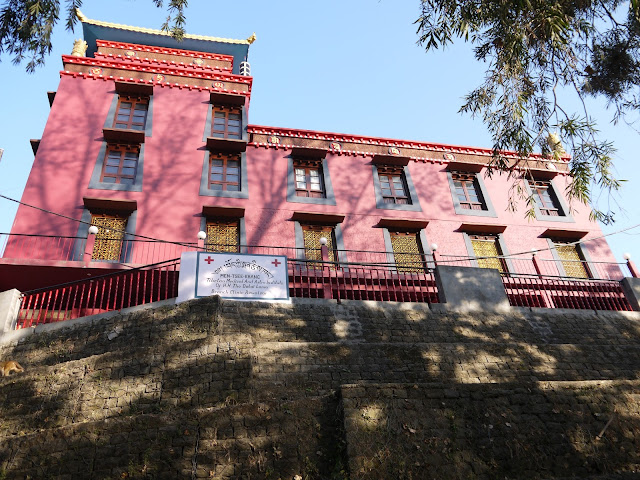 We passed by Tibetan hospital… the sun was setting and evening approaching.  The mixed sound of Shabad Kirtan from Gurudwara, the sound of bells from the temples, chirping of birds, and deep sounds of  trumpets and horns from the Buddhist monasteries…were so hypnotising that one will have vibrations in the body.

Rewalsar has everything to offer to all … be it a religious person, or a spiritualist, or a purely tourist… everyone can quench his thirst here.  The magnificent natural beauty all around, the Temple, monasteries , Gurudwara, the snow clad mountain peaks and lush green valleys and the green watered lake make Rewalsar a picture perfect place.

One can see Rewalsar on his way to Manali, with extra coverage of just 35 Kms.  From Ner Chowk one can turn left…go to Rewalsar 25 Kms from there and then from Rewalsar go to Mandi (25 Kms) and join the main Manali High way.  If my log has created a desire in you to see this beautiful place, then the purpose of writing this log is fulfilled.

Thanks for reading and in next and last part I will write my return journey from Rewalsar to Iceland…….

One could not hold back but marvel at the beauty of this 1464A.D grandeur built by man. The story goes in 1947, Raja Rajinder Singh of Neemrana moved down to Vijay Bagh as the façade of his Fort Palace crumbled and its ramparts began to give way, for fourty years he tried to rid himself of his liability but there were no takers.