We travelled to Spiti Valley in Himachal in May 2015. We booked the package with a tour operator for a dedicated vehicle, driver and guide. The package was ex-Shimla so we had to plan for getting to Shimla and back from Pune.

We booked Duronto Express both ways to travel from Pune to Delhi and back. The train is conveniently timed though it runs on Friday from Pune and Monday from Delhi but then it forces you to spend more time on your vacation two full weeks. The train is quite popular and get booked within minutes on first day of reservation being opened. I fought with IRCTC site on the first day to secure confirmed reservation. Delhi to Kalka was by Shatabdi Express which is again convenient but the train interior and service was disappointing, same menu of unpalatable things served for years together. Railways takes ages to innovate on things. Secondly the train interior is poorly maintained.

Kalka to Shimla was by cab. I booked one from www.kalkashimlataxi.in. The driver forced a break of 20 minutes for lunch even though we were not interested with a haryanvi “khan khun ko time to lage se“. Since we just had one night at Shimla before starting for our tour next day we booked a hotel at Chhota Shimla away from hustle-bustle of Mall road and rest in solitude.

We reached hotel Springfields by 3:30 pm and pleasantly surprised by the property. Its a heritage property originally built by Raja Dehant Singh and his grand-son is running the place now. Its mostly wooden with great staff with whom spent quite some time talking about the place. They have a small courtyard facing the valley which is the best part. The rooms and interiors were also quite impressive. We thoroughly recommend this hotel for a relaxed stay. I would love to stay here reading books in lawn and just not do anything.

It seems they mostly get foreigners as visitors when look into their guest book which had pretty old records. We also got to meet a wonderful family with kids and spent talking and celebrating wife’s birthday with them in the evening. 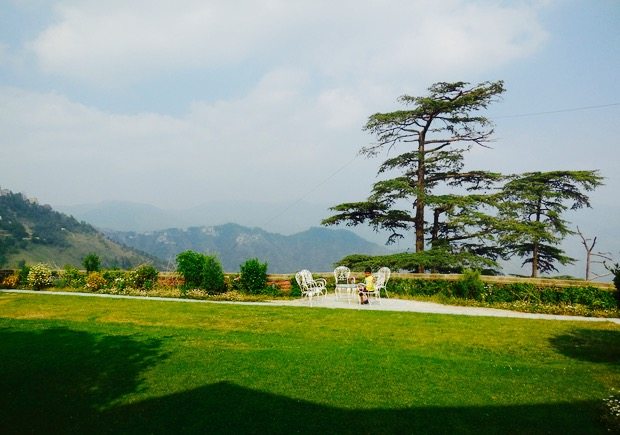 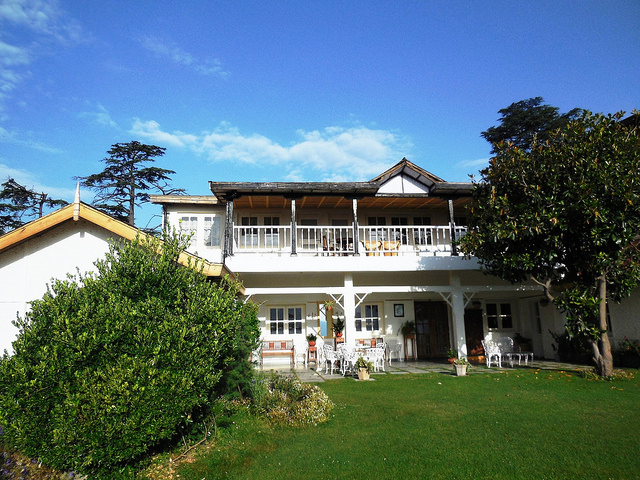 First day we drove from Shimla to Sarahan via Narkanda, Rampur. This road is historic Hindustan-Tibet road whose construction was started by Lord Dalhousie in 1852. The road has a many interesting anecdotes. There is a narrow tunnel at Dhali near Shimla which paved the way for further extension of road. The road first climbs upto Narkanda and then descends sharply to come upto Sutlej river level. Here there is a bridge to cross Sutlej to go towards Kullu. However, we continued at the left bank of Sutlej crossing Rampur, Jhakri, Nathpa, Jeori. From Jeori, one need to climb 17 kms upto Sarahan. By the time we reached there, it was sunset but even in the fading light we could witness the first view of Shrikhand Mahadev peak and the range around it.
We stayed at Green Valley Resort which is a private hotel and a little inside the alleys but has good view. The rooms were basic but their restaurant was newly done with good modern interior and food was good. Sarahan is famous for Bhimakali temple with Kali as reigning deity. It has temple made of stone and wood in local hill style architecture which is unique to this region and beyond. We would see many more temples with similar structure. Sarahan also has a bird park but it was closed for the mating season. We visited the temple in the evening around aarti time. The ceremony was a little pompous with big bugles being blown and lot of chanting. It is one of the main temples for Bengali folks and they were plenty in number. There are two temples, one old and other new. The old one is now closed for public. Next morning woke up early and roamed in the town. The Shirkhand Mahadev range was gleaming in the sunlight. Me & the guide took a circular round of the town and saw the temples from different angles. 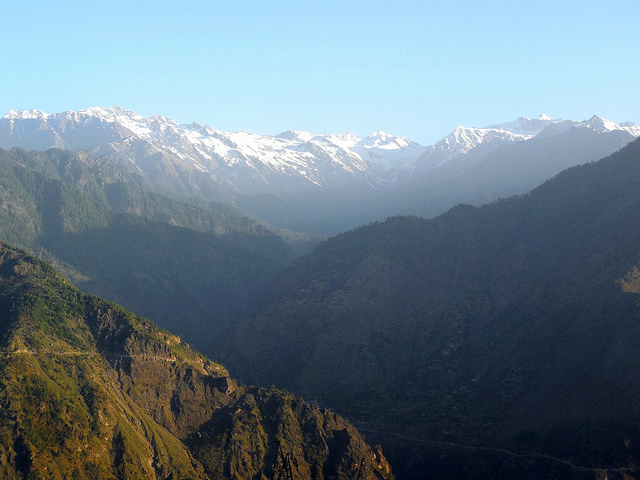 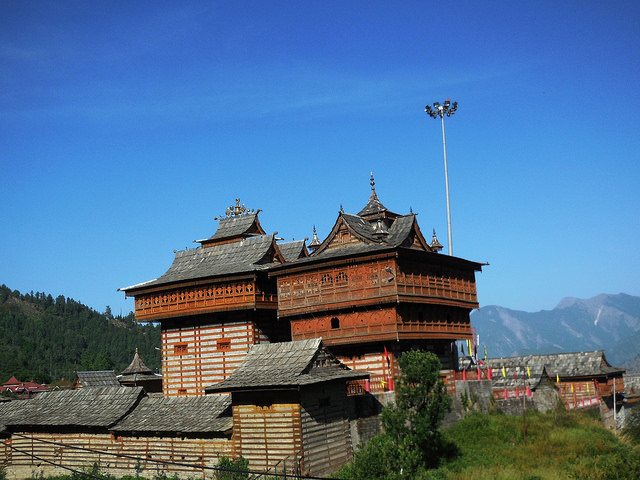 Today we were destined to Sangla valley. We connected back the main Hindustan-Tibet road at Jeori and went further. We had some nice breaks in the this pleasant journey. There is a temple complex on the road-side, a gushing waterfall, being stopped by  herd of sheep. To go to Sangla valley we had to break away from Hindustan-Tibet road at Karchham. Sangla valley might be named on Sangla town but river flowing through it is Baspa. Baspa merges with Satluj at Karchham. We reached Sangla leisurely by afternoon admiring the green valley throughout. We went to Cafe 42 there and had Maggi, Grilled Sandwiches, Coffee. The place was similar to any urban cafe with sit out and books etc. mostly catering to foreign tourists. The views throughout were great and it was a little cold. 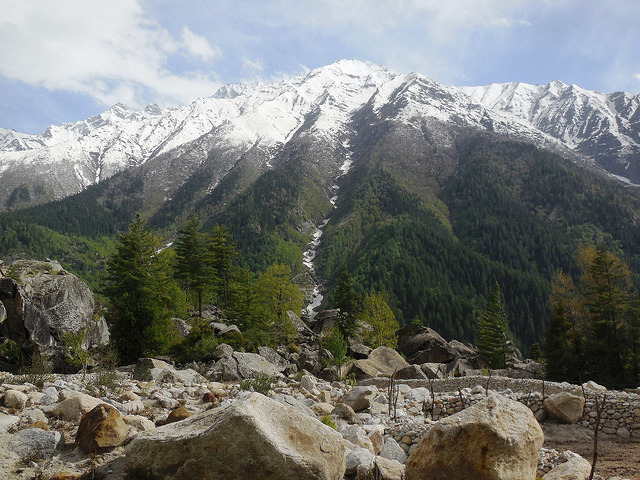 We proceeded to Chitkul which is the last point one can visit on vehicle on this route. Its a small village at 3400 mts. When we reached in late afternoon, it was quite windy and chilly there. Chitkul is located at quite wide open valley. Due to melting ice, there were many streams gushing through village. We walked up a little to visit the temple. We just had tea at one of the shops and returned back to our night stay at Rakchham. We stayed at Hotel Apple Pie which was again basic but had great food. 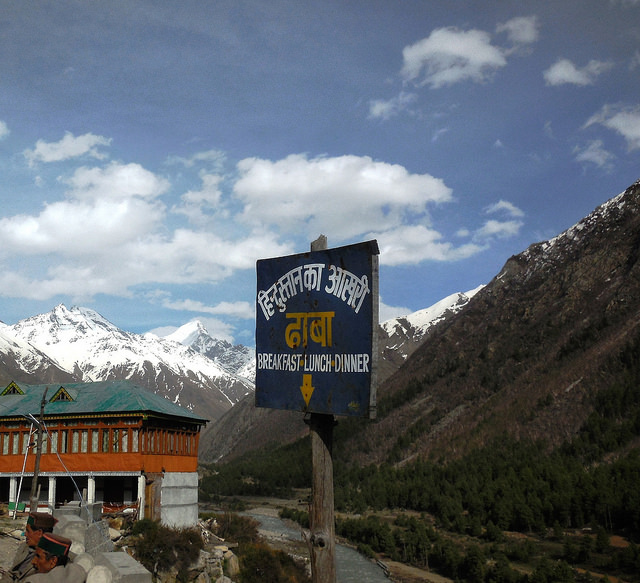 In the morning took a walk upto Rackchham village and beyond it. The sun was yet to show up above mountain. Once it was was about to burst out, the rays scattered on the mountain top. Once the sun was fully up the entire valley was filled with sunlight and due to mist there was haze. At one point we came to open valley with mountain streams criss-crossing. What an experience it was which can’t be described in words. 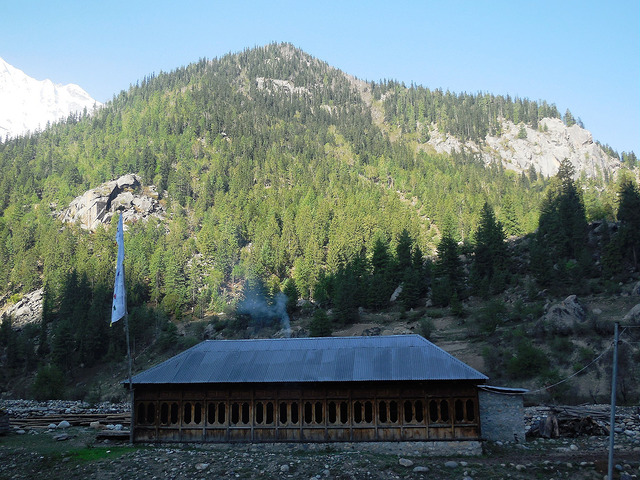 A very distinct house with chimney looking like ship 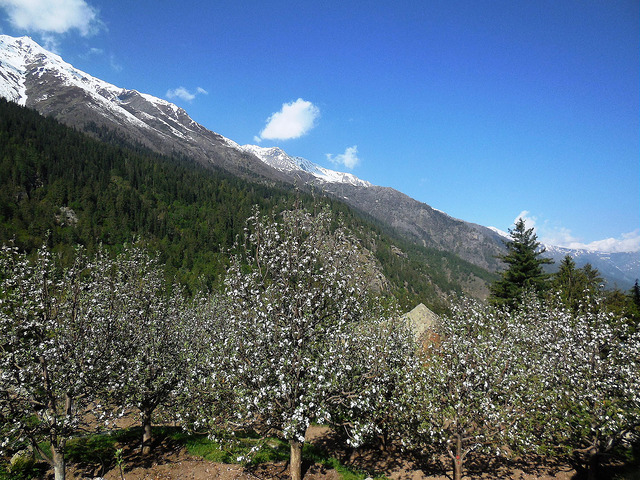 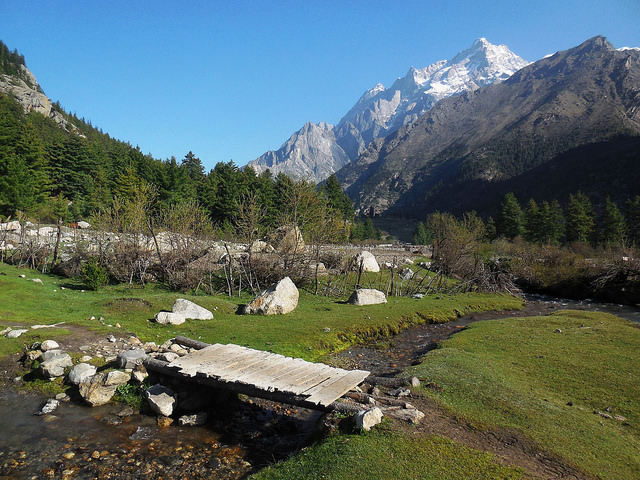 Today we were to drive to Kalpa which is a town above Reckong Peo which is administrative headquarter of Kinnaur district. We started leisurely and soon reached Sangla which gives name to the valley. Sangla village is on a slope with houses rising one above the other with gigantic Kinner-Kailash peak (6,050 m) towering over it. Sangla is also famous for Kamru Fort. This fort is like a tower dedicated to Kamakshi Temple. The Goddess idol was brought from Guwahati (Assam). We braced ourselves and took to steep climb of stairs. The climb took us through houses of Kamru village and get a peek into their life. First there is a temple which has couple of shrines in the small courtyard in hill architecture. Their sloping roofs are lined with flat chipped stones tiles and the distinctive cone as the top. The main Kamru fort was still some climb away. Thankfully, it was quite sunny and pleasant for the climb. After some time, the Kamru fort came into view perched right at the top of the village. One has to tie a cloth around waist and wear a cap which is available in the fort to enter the precincts and go around. The fort is one of the oldest in Himachal and its origin is not known. The temple is stone and wood and its remarkable that it still stands today after hundreds of years of harsh weather. The view from the top was gorgeous looking into the valley and mountains beyond. 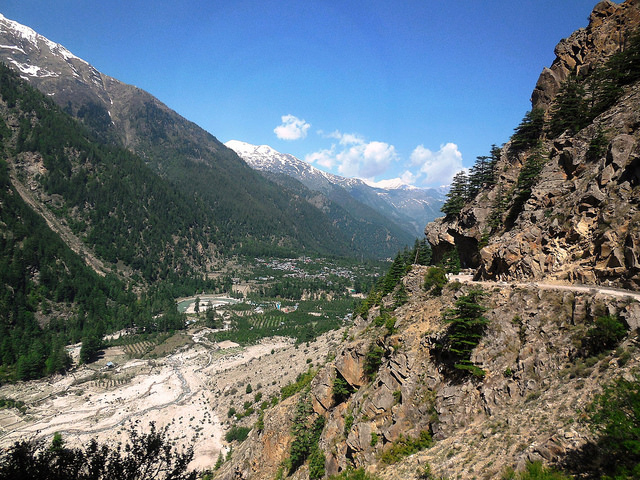 On the way to Sangla 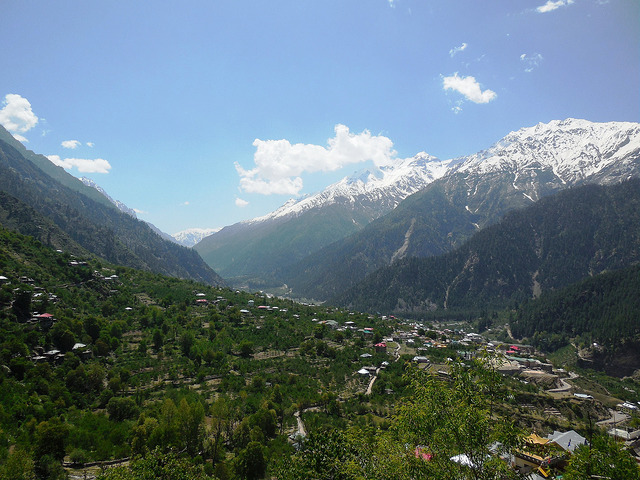 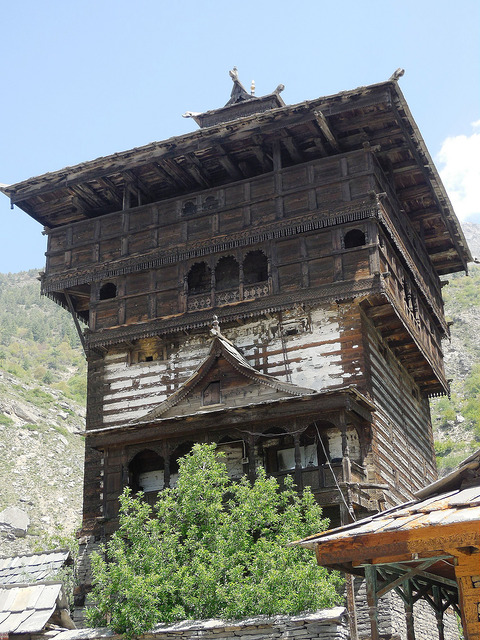 After Kamru fort, we joined back the Hindustan-Tibet road again at Karchham and drove to Reckong Peo town.

All of us were full of excitement and adventure and thrill, this was an out of the world experience , now thrill doesn’t stop here, our trainer told that before we reach a cliff for cliff jumping we all will jump in river when he will ask to do. As soon as the last rapid came , he asked us to jump and we did, what a thrill……and excitment, chilled water and strong flow of water, but we are holding a rope tied with raft and floated with raft for 2-3 kms.

Everything stablised once we reached for cliff jumping, this was a jump from approx 30 feet height again a great thing to do. Finishing off just stopped before Rishikesh, came out of river , completely exhausted so had lemon water to claim our energies back. Took a local bus to reach Shivpuri where our vehicle was waiting.