Recap – We visited Ranikhet during Mar/Apr 2011. Road review to Ranikhet has been covered in Part I. Stay and local areas of Ranikhet were covered in Parts II and III. In this last part, I cover my trip to Kausani and thereafter return to Delhi from Ranikhet.

Kausani (6200 feet) is too close to Ranikhet (just about 60 kms) to give a miss when visiting Ranikhet. A one-day trip, therefore, was naturally dedicated to Kausani.

The drive from Ranikhet to Kausani turned out to be quite interesting, perhaps because we took an unintended (and largely uncharted) route. Our journey on this road (a stretch of perhaps 20 kms), as described below, made a fascinating drive during onward journey to Kausani.

There are two well-defined routes to reach Kausani from Ranikhet –

We took a third route –

The route, not in vogue, turned out to be a memorable experience (i.e. the stretch after women’s college till Patharia). The patch, which starts approx 4-5 kms after Majhkhali, runs about 20 kms further till Patharia, where it meets up with the main road, i.e. Kosi-Someshwar. This run of 20 kms is devoid of any public transport, visible habitation and humans in general. Throughout this scantily metal-topped road (till Patharia), we saw only one vehicle (Maxi type) which was involved in some road construction job. Otherwise the drive was pure jungle/bliss/solitude, giving a forgotten-corner-of-world like feel. The route has abundant, sometimes scarily dense, greens of pine forestry all around. 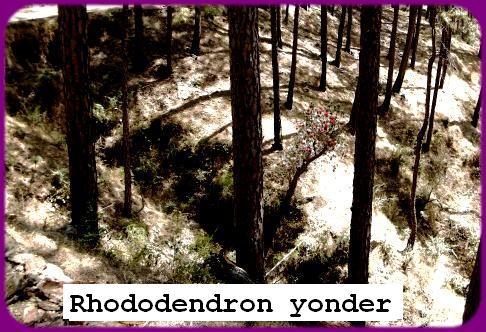 Shades of green were intermittently streaked with wild reds of rhododendrons (which were nearing the end of their season).

Driving on this almost unmetalled road strewn with abundant pine flowers of varying sizes, I feel, was one of the most fabulous journeys we had had in Himalayas. The drive was a real cherishable treat (remember though, this romanticising is almost a post script – we were not even sure then whether we were going the right way… and there was a hint of disquiet)!

To top it all, soon after hitting the main road at Patharia, as we sat in a tea-stall, the local guy showed us a spot on the road where a panther had supposedly attacked an animal the previous night. Dark stains of blood were still visible! The panther had apparently approached from top – the same area through which we had just driven down!!!

Pathariya lies on the main Kosi-Gowalkot-Someshwar route. From Patharia, the road condition was very good all the way till Kausani.

Thanks to the leisurely drive on unmetalled patch, we ended up at Kausani by late afternoon.

Kausani, a darling of tourists, a most desirable hill station for any self-respecting Bangali Bhadrolok, turned out to be quite spectacular. The place is centred on a main circle as soon as one enters Kausani (which is a trifurcation on the road). While approaching from Someshwar – one road enters the town, other moves towards Tea factory and further onto Baijnath. Gandhi Ashram, inside the town was on our agenda but we gave it a miss in favour of tea gardens, which lies about 10 kms down the road going towards Baijnath. 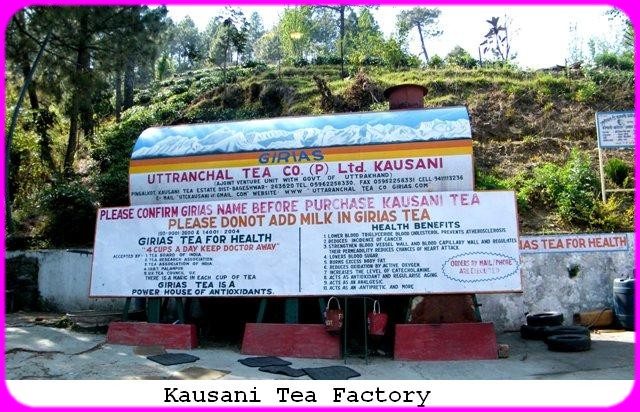 By around 4 pm, we were at the tea gardens and famous ‘GIRIAS TEA FACTORY’. Before approaching the factory, one is witness to tea plantation on either sides of the road. The view is somewhat similar to drives in Palampur area (HP). Visitors can ask for a guided tour of the factory, where they take you around the factory describing the process of tea production.

There are a couple of shop-cum-restaurants across the road where one can taste varieties of tea prepared in authentic style (without milk), and buy various samples. We dutifully did that and also picked up two packets of Giria’s green tea.

Return trip to Ranikhet was –

This route is worth a trip for sheer beauty presented by endless spans of farmlands between Someshwar and Bagwali Pokhar. The large expanses of green farms sloping up or down fills the vision of traveller on this route. Scenic farmlands such as these are quite rare in the hills (especially as a drive-through on highways). Perhaps Ranikhet (Queen’s farms) owes its name to this phenomenon. 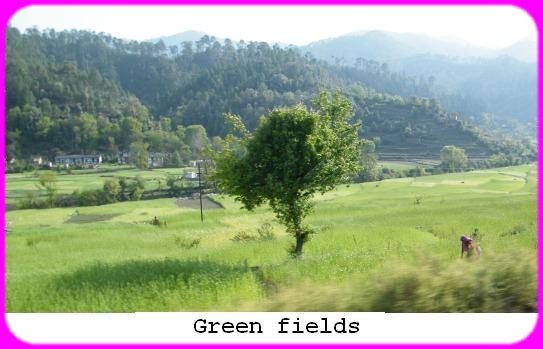 Return path from Ranikhet was via Haldwani. We started at around 9 am to arrive Delhi by 5.30 pm. The road till Haldwani is good to moderate in patches. One stop-over, worthy of mention, on this route is Khairna. This is the place where roads from Ranikhet and Almora converge and moves on towards Haldwani.

The tourist rest house (KMVN TRH, Khairna) is situated bang on River Kosi. The clean, placid river flowing past us as we sat in KMVN Restaurant was quite enticing – WORTHY OF A DAY’S STAY IN THE SMALLISH TRH OVERLOOKING THE RIVER. This will enable the lodger to walk down to the river and enjoy a hearty bath – in fact that is what a few tourists were doing, as we sat voraciously watching them down from the KMVN Restaurant. 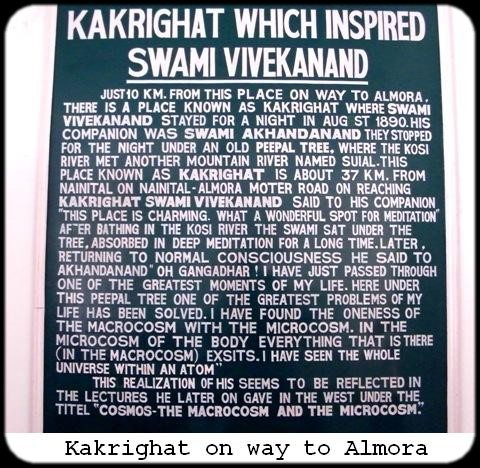 That then ends this Himalayan trip – as enjoyable and memorable as any other in the Himalayas. We drove away with a sense of gratitude, fulfilment and longing at the same time – gratitude and fulfilment for enjoying the Himalayas; and longing – for another visit to the mighty ranges. 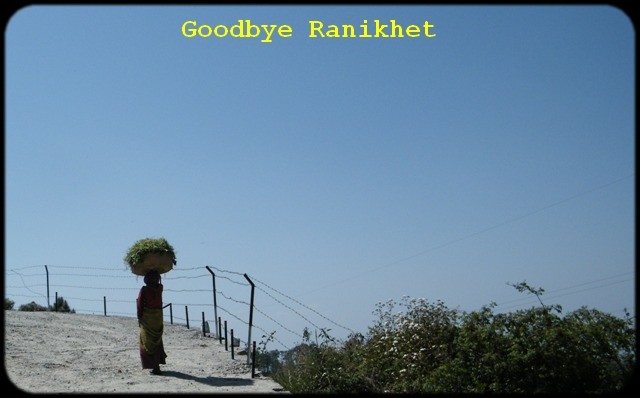 The continuous rains had made the final climb even tougher. While I waited with the kids, my husband and Ajay bhaiya went in search of a tented accommodation put up by GMVN. I was told that there was a long queue even for this basic accommodation, however Ajaybhaiya managed to get 5 beds for us in tent no C80. The accommodation was very basic and each bed meant a foam mattress and a sleeping bag.