Post the post-sunset, in no time it got very dark and we were back to our cottage. Let me take sometime and give you a brief overview of cottage topology. Photos would follow as we wake up to next day. This cottage has some fancy name but for the benefit of practicality, lets call this ‘Bunty’s Cottage’. I am sure that there is a greater chance of finding this place by this name.

It is a big house with two separate units. The main unit has two floors, a lower ground floor like many Pahadi (mountain like) houses and a first floor. The other section is more like a support section, hosting kitchen, store and few other essentials. Coming back to main section, we didn’t venture into lower ground floor during the evening, and also during next day so I do not have any inside information so as to say, as well as any pictures. The upper ground has two well sized bedrooms, each having a humble and clean attached bath. Both the bedrooms open into a lounge, which proudly hosts a Billiards Table, a set of worn-out sofa, a TV set, a cosy table flaunting a personal computer and lot of paintings, which were done by Bunty’s spouse. If the Bollywood in you is bubbling inside, making you guess her name then you are 100% right and I would validate that as we go further. The lounge opens into a small and non-intimidating terrace which overlooks the garden followed by valley, giving you uninterrupted view of the ‘The Abbey’. The lounge connects to a large dinning hall on the left  and then takes you to the back of the main section to a small pathway which has the other section on the mountain side. Same mountain on which stands tall our car, also overlooking the front garden and Mount Abbey over the top. Read it all over again, it is OK as long as you don’t make me read your comment twice. 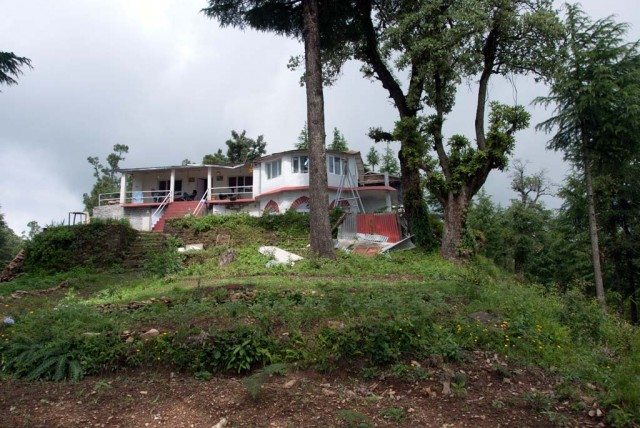 The dining hall which is connected to the lounge, further opens to the other side of cottage. There is a narrow balcony running along the outer edge of Dining hall which overlooks the valley and then to peaks. Yes, the Himalayan peaks of Trishul, Nanda Devi, Panchachuli and in a good weather, one can watch them all over a cup of Himalayan sweet tea.

A long day’s drive needed some celebration so after the initial commotion – remember we were with two young and impatient kids – over food, TV, Computer Games and iPad was over, we moved on to enjoy our well deserved break and were joined by Bunty’ dad, Mr. Singh. Mr. Singh stays at Tanakpur, runs a school and was here because of the summer vacations. He retired as a teacher from Sherwood College and was now back to his hometown, serving the hill folk. Bunty has two sons, Bubble and Rueble (pardon the spellings), the older one stays with his grandfather as he now goes to school. The younger is not old enough to warrant the vagaries of Indian Schooling system and has some more time to enjoy Himalayas so he along with Bunty and Bubbly stays at the cottage. Banty lives there full time after his numerous stints at camping, adventure sports, teaching etc. As night progressed, Mr. Singh got more interested and had may stories to tell. 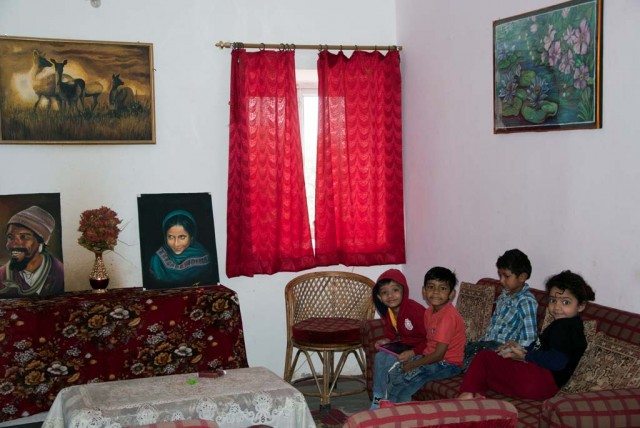 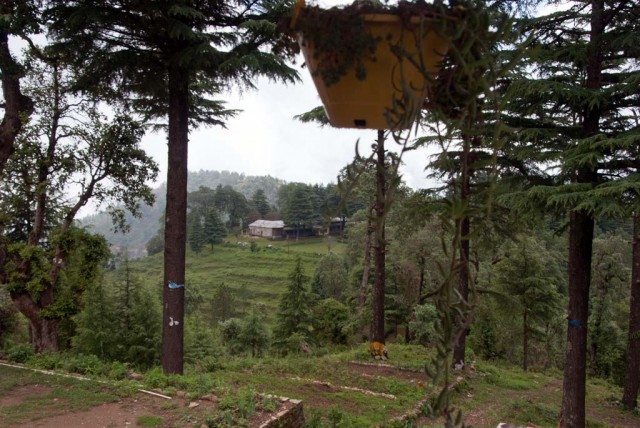 The Abbey from the terrace

I would start first with the story of Abbott Mount itself. There was a visionary land owner in Jhansi by the name of ‘John Abbott’. As his fortunes grew, there was a time when the then King of Jhansi could not digest his growing wealth and he was asked to move out in no time. So in the summers of 1914, he brought whatever wealth he could and bought a ton of land at Abbott Mount, of course the place would have been called something else then. Mr. Abbott could see the huge potential and started building cottages and selling to British who were always looking for a colder place. During that time, one could not drive all the way till this place and it used to take as many as 3 days worth of trek from Tanakpur but still there was electricity here. He also built a huge tea estate in the area. Post the Independence, when British left they sold their land to locals. In 1944, Bunty’s grandfather bought some land and that is the origin of Bunti’s cottage. The structure is not that old though and I believe it would have been done very recently. The Abbott Abbey is the place where John’s family used to stay and I believe his current generations visit here once in a while. The Abbey or one of its main buildings is given on lease these days.

Beautiful Lady - painted by the hostess

We could hear crickets and being so much away from the main habitation, it was a very brilliant setting to have a good and delightful conversation with Mr. Singh and we moved on to more fascinating topics. Over the next many hours, we talked about Kumaon and Garhwal, how they were two warring states and the story behind 17th Sep, which is celebrated as ‘Sadbhawna Diwas’. These stories were a great start to our King Kumaon trip and we could not have asked for more. When Mr. Singh told us about the victory of Kumaon and the story about sharing pumpkins over bonfire as a celebration of the victory, we knew that it is going to be on interesting trip. 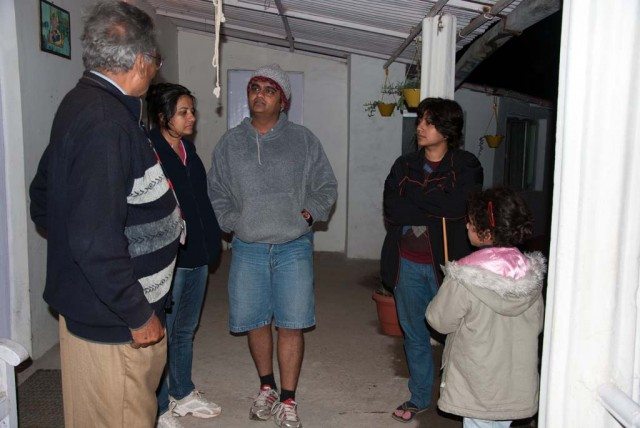 Mr. Singh in a conversation with guests from the Metros

We called it a night after not so long and were looking forward to waking up for catching an early morning sun-rise, late morning not being the choice.

As promised, here are some more pictures of the property.  Bunty’s Cottage is at the height of 2300 meters and attracts snow. If you come here in the winters, you would enjoy more of solitude amid the snowed Himalayan peaks. 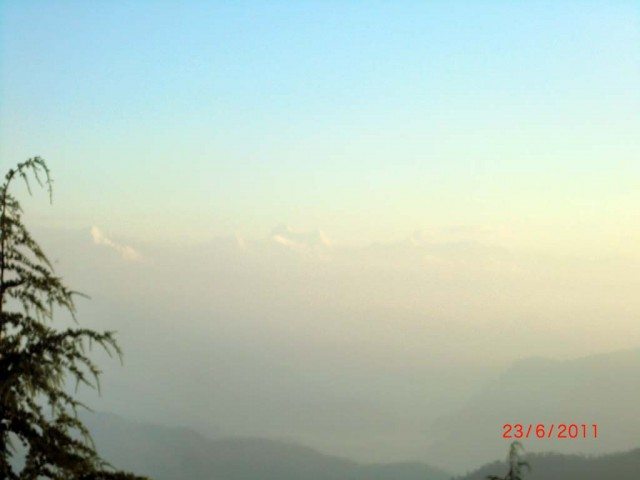 Can you spot some peaks. Look hard. Panchachuli.

Loos are humble and clean. There is no running hot water but the staff is prompt to sneak a bucket-full of water from the window, on demand.

Loo. Clean and a special window to get the hot water bucket 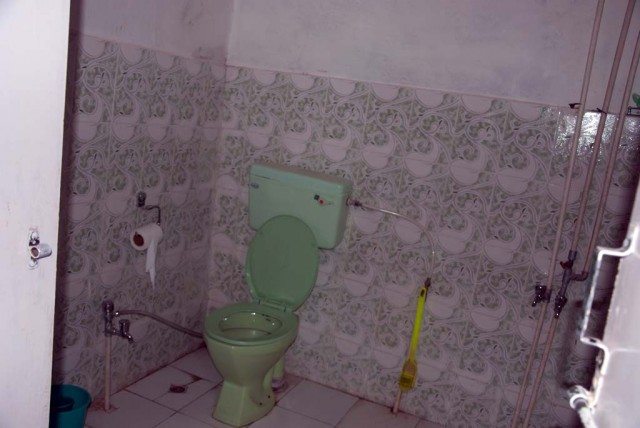 Lounge which can be a good place to build conversations or to have a cosy drink in winters.

I do not find any pics of the rooms. They were decent sized, having a Queen double bed, sheets were not crisp but clean and the woolen quilts/blankets were warm enough though a little heavy for comfort.

The large dining hall which is still in making. If you would notice, the talented hostess is creating a full wall mural, being sculpted using PoP and Cement. 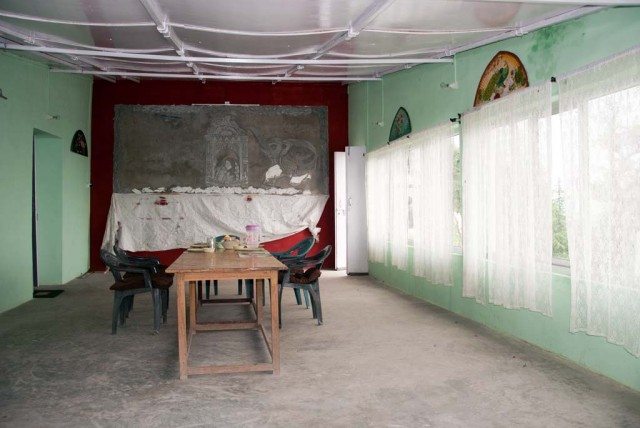 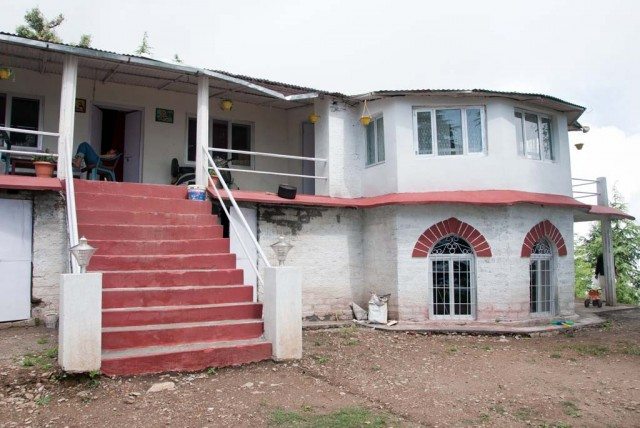 Right where we parked our car, the place from where we got the famous sun-set shots, one can also pitch tents. If you have a large group then there is quite a clearing to put 5-6 big tents, with attached loo. 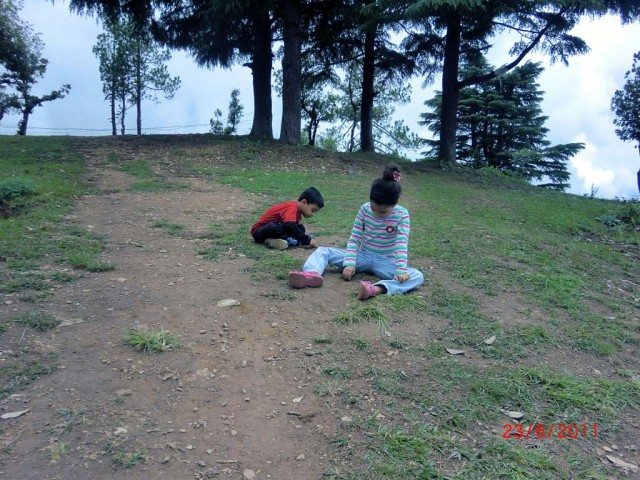 There are no great places close-by to warrant a sight-seeing sojourn but there can be enough if you are fond of walking. Bunty would love to put together a small trek for you. 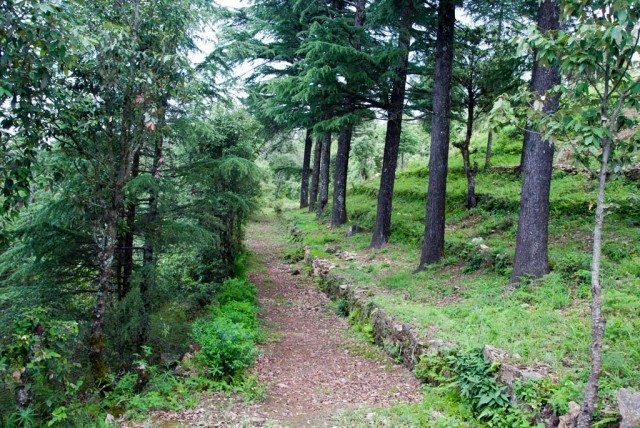 There is Internet on request. I didn’t get Tata Indicom or Reliance Signal there but phone works mostly. Get your own booze. Tariff is INR 1000 per person per day on double occupancy, includes three meals. The place can host 6 (in 3 Rooms) people in rooms and many more in tents so you would never hit into a big group there.

My friend and his wife got up and they got some shots of Panchachuli peaks. I missed those but they were kind enough to share the pics with us. We had to leave for our next destination and we were warned of poor roads so we decided to leave early after a hearty breakfast of Poori and Aaloo ki Sabzi. We could leave only by 12 and this time the plan was to reach Chaukori via Patal Bhuvneshar. So in the next episode, we would go through the picturesque Kumaon, learn more about the remote roads and how they have to dig roads and make water channels so as to stop the road from getting washed away and realize that out here even a great geological phenomenon gets a elaborate mythological interpretation.

All this in more as we drive out of the scenic Abbott Mount towards Lohaghat, Gangolihat, Patal Bhuvneshwar, Berinag and then all the way to Chaukori.