PURANA (OLD) Qila in NEW Delhi – an appropriate expression indeed, of what Delhi is all about – layers and sub layers of history emergent from eras bygone; saga of destructions and creations, of a new city built every time to be subsumed by a newer one. 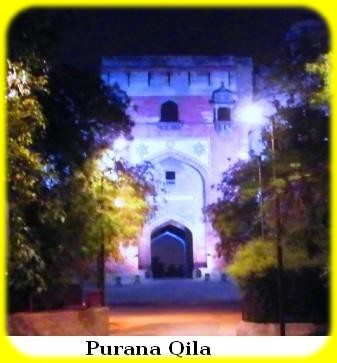 OK, to start with, this grand light & sound show is about glorious heritage of Delhi, covering approxly last 5000 years of its existence.

The venue is Purana Qila, which is co-located with Delhi Zoo, next to Pragati Maidan. Metro Station is Pragati Maidan and Bus Stop is Zoo. Parking lot of the Zoo caters for visiting vehicles.

Tickets cost Rs 80/- (adult), Rs 40/- (children 3-12 years, students, senior citizens 60 or above, physically challenged). Sharmi offers a poor joke here when she says that I could have qualified for a concession if there was a category for ‘mentally challenged’.

They have 2 shows every day, Hindi followed by English. Show timings are (for April) 7pm to 8 pm (Hindi) and 8.30 pm to 9.30 pm (English). However, do confirm the timings beforehand, because they vary with season. Check this out on Delhi tourism tele 23315322 ( yes… the line works, the guy at its end picks up the phone and what’s more, he courteously responds to your queries). Extract of timing from a web-site reads thus:-

Also, keep in mind that Purana Qila is often host to various cultural programmes (hosted by GoI/ corporate entities). Naturally, on such occasions, this show will not be available.

In order to keep the readers’ appetite for the show intact, I refrain from revealing plot of the show. Rather, let’s dwell on its format and comparison with the previous show.

The current show format has been created during CW Games. It’s called Ishq-e-dilli (Son et Lumiere). High on technology, the show is described as ‘India’s first permanent projection art installation. It uses cutting edge projection and laser technology, including 3D in some parts’ (… whatever that means). The projections and impact are impressive.

Comparing with previous show format, first change is the location of show. Previously, seating was arranged on the central lawns, straight down the lane from the main gate. The current seating has been shifted farther to the end of the pathway on the eastern side.

Secondly, I guess that it may not be light & sound show in strict/conventional sense – meaning the show is projected on the same backdrop, so you watch the same spot through the show. In the previous format, the entire surrounding was used as backdrop – fatal fall of Humayun was indicated by focus on the real tower; Red fort was indicated by another light in a different direction, needing you to turn your head all around, thus providing a real-time depth to perception and an earthly flavour. Current show, albeit more stimulating, remains more of a virtual reality. Well, it’s a make-believe world after all. 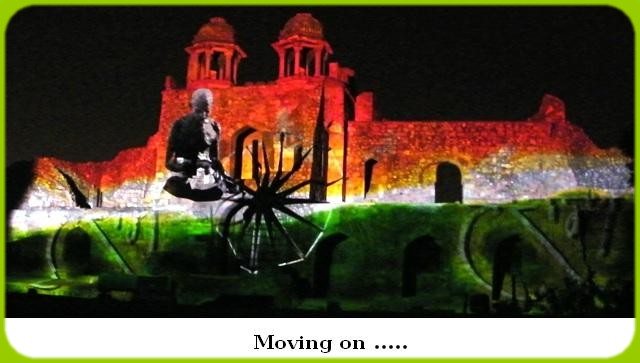 We saw the English version and Naseeruddin’s narration was impressive, as always. Personally, though, I would prefer to watch the Hindi version – my gut feel is Hindi version would be more dynamic.

Effects in the show are marvelous – a scene of crumbling building, for a second made us feel that the tower was really falling on us.

The show is extremely informative as well as entertaining – a must do, I would say. So go ahead and enjoy it.

This being an open air affair, next to Zoo area – expect clouds of mosquito attacking you mercilessly. So carry your tube of ‘ODOMOS’. I saw some very sensible persons carrying their own ‘mosquito coil’ which was frequently lit and placed on nearby ground.

P.S. The trip to Ishq-e-dilli can be rounded off with Matka Pir biryani/korma (located next door), if you a non-veggie and Matka Pir aficionado. In fact, you could place the order well in time (tele 23371454), collect the item before the show, leave it in the vehicle and relish it in your own time after the show. Other food options nearby are of course Pandara Road Market and Khan Market, both 2-3 minutes drive away.