“I am not able to see anything. Where are we going? Are we going home? Summer vacation started?”

“No, we are going to Allahabad. We will go home in few months time”, I replied while starting the car. 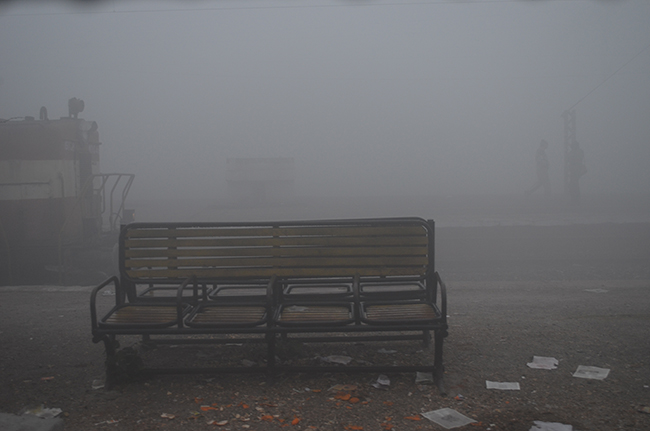 Allahabad or the Tirthraj Prayag, where the Maha Kumbh festival began on the full moon night (Purnima) of the month of Paush (14th January, 2013). The Kumbh Mela, believed to be the largest religious gathering on earth is held every 12 years at Prayag, the place of confluence of the three holy rivers, Ganga, Yamuna and the mythical Saraswati. Millions of people travel across the globe to take a dip at Sangam during the festival, as it is believed by doing so one gets free from the baggage of sins committed in lifetime. The Kumbh Festival is also held at Haridwar, Ujjain and Nasik. We are not too religious person, neither we are atheist. We just wanted to witness Maha Kumbh at Prayag, considered to be the largest and holiest of them.

It was not a well planned trip. We had received an invitation from my friend’s brother for his marriage at Allahabad on Feb 1.  We thought to attend, as it would also give us an opportunity to witness the much awaited Maha Kumbh. All the trains (running at night) were full and finally, we were able to book our  berths  only in North East Express on Feb 1, scheduled to leave from Anand Vihar at 6:50 a.m.  and expected to reach at 3:40 p.m. We thought it OK, since it would be a day journey.

Anand Vihar Railway station is approx. 40 Km from my home in Gurgaon. I wanted to avoid driving in the morning, since last two days  there was fog in Delhi & NCR region and stayed the night at my brother’s place in Minto Road Govt Quarters, close to New Delhi station. The plan was to park the car at our Connaught Place office in the morning and take a cab to reach the station.  It was a dark and foggy winter morning…visibility was only few yards and difficult to drive.  It was freezing too, not many lights besides the streetlight to reveal any details. Finally, when we reached, we were not able to locate where the station is and we were just standing few meters away from the main Entrance. It would have been practically impossible to reach the station, if we started from Gurgaon. We had a sigh of relief once train started on time, as we were sure that  it would be delayed due to dense fog. After leaving the station the rain gained its speed.

The prospect of visiting Allahabad filled my heart with joy. We stayed  in Allahabad before for almost a week in year 2010 and going there during Maha Kumbh is something special for us. We were looking forward to the marriage at night as well. However, our happiness was short-lived. The train decided not to move an inch before Shahibabad loop and took two hours to reach Ghaziabad from Anand Vihar. We knew that it’s going to be a nightmare for us and it’s better to enjoy the journey instead of worrying about when it would reach the destination. There was no sign of Sun till 10:30, but the view from the window was beautiful… I got the opportunity to concentrate on photography to relieve the boredom of this non-ending journey. 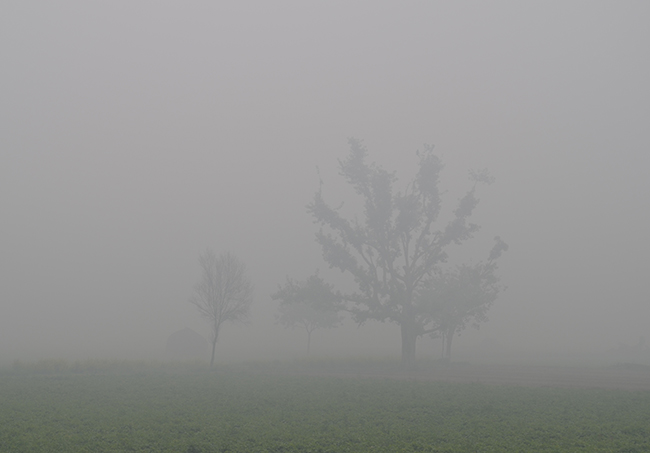 Finally when Sun came out, our train was running 3 hours behind the schedule. But, when you have no control over the situation, what else you can do either. Anyway, we were impressed to see the beauty of the landscape.  We had always crossed this section of Indian Railways during night and this is the first time we were traveling during daytime. The train ran between green fields. The distant trees seemed to move in the opposite direction. Our classroom, which we attended long time back, flashed in my mind instantly, when our Physics teacher brought this up as an example to explain ‘the Theory of Relativity”. For a few minutes, all my friends’ name came to my mind. The sights that also attracted us most on the way were that of the green sugarcane and potato fields of U.P. State., reminding me about my own village and our fields. Memories are always sweet and nice to remember. 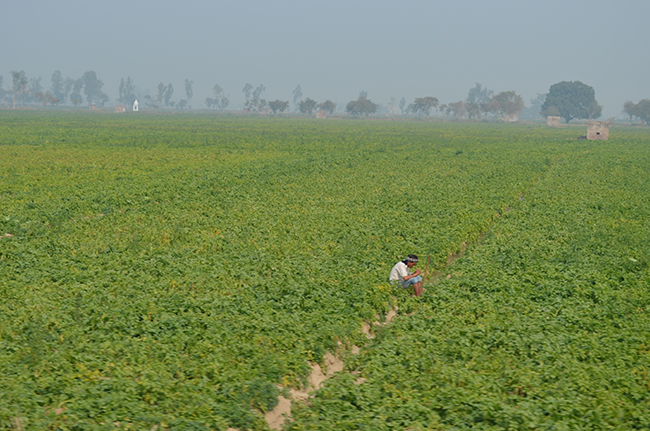 The scene looked extremely beautiful and I was lost in admiration of it.  Inside the train, too, everything was interesting. Apart from the sightseeing, other things that attracted our sight were the selling of fruits by fruit vendors.

The train was now moving quite fast after leaving Aligarh. When we were approaching Etwah, we saw NH-2 running alongside the railway track. The last road journey during the last summer vacation still remains fresh in my mind. The journey remained important for the reason that it was a rare opportunity for me and may be we will have to take the same route once again in few months time in May this year, who knows! 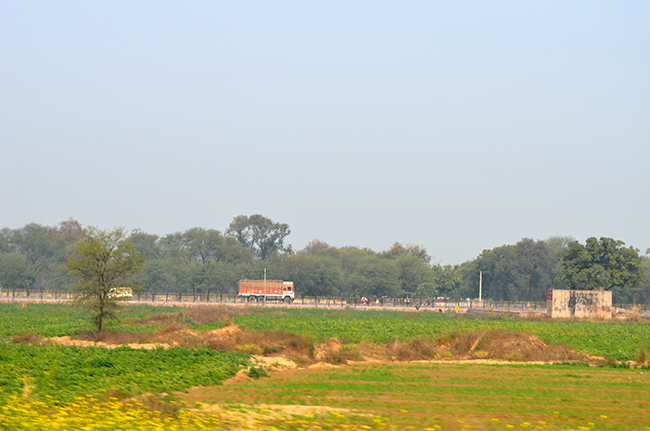 We have spotted few peacocks, herons and some of our feathered friends  and captured few of them from the moving train. 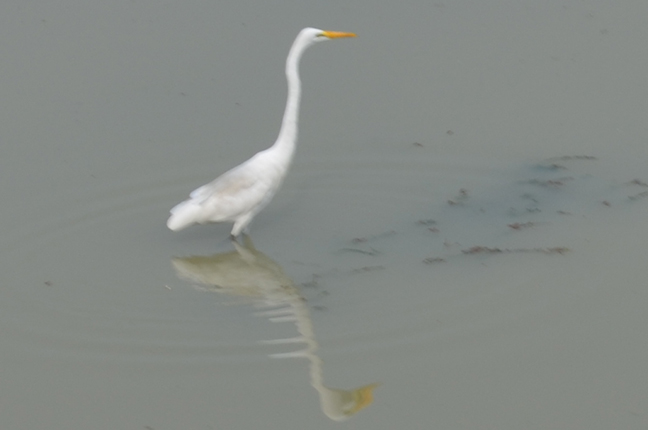 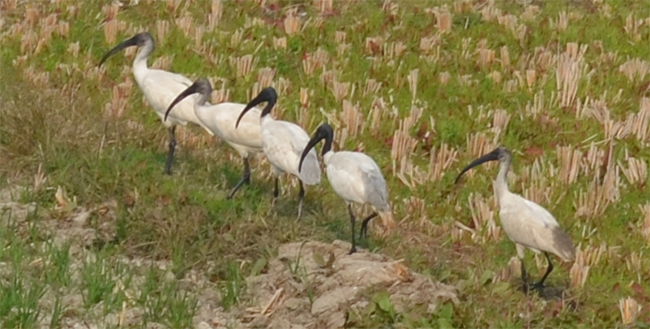 Waiting for hunt in dry land?

After a very long time, we were travelling in a train other than Rajdhani or Duronto and it was like those initial days when we couldn’t afford a ticket to Rajdhani, while going home. We thought to have food in the train itself, as it has pantry car. However, we were really shocked to see the quality of food served in the train (as well as during our return journey or even in Allahabad railway station, managed by IRCTC.) I don’t know whether the condition is same in all express trains or it is only in these  two trains we traveled this time. If the answer is yes, I can only request to the Hon’ble Railway minister or the concerned authorities to look into this immediately. People won’t mind to pay a few extra in return of security and some basic amenities. The price of the non-eatable foods served in the train are also costly.

Now, consider a scenario where you need to travel by a train for close to 10-12 hours, that also means that you will need at least one meal and something to eat in between e.g. breakfast/snacks etc. A pack of “bread-omlet” costs us Rs.35  each (we throw all three packets, two not even touched); Veg Lunch costs us Rs.80/pac. (had to eat, as we had no other options available), a pack of two samosa cost us Rs.20 (we still wonder whether we eat such delicious samosa in our life yet or not!!!) and bought several other things to satisfy some of our basic needs, including few bottles of water and tea. 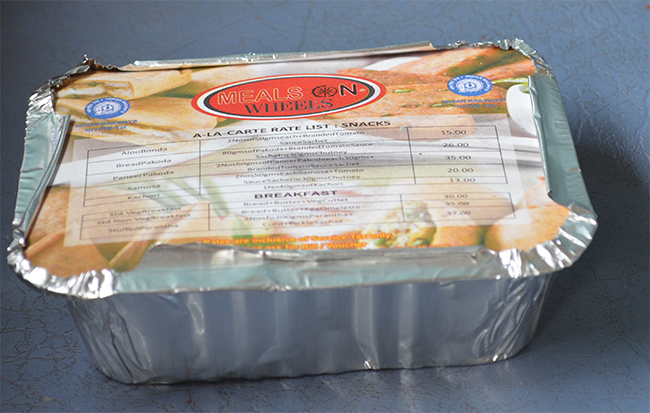 On an average, we spent approx. Rs.200-250 per person for a journey of 10 hours. So, a journey of 24 hours would have costs almost 400-500 per person, if not more at any given date. Now, if you consider this with your journey in Rajdhani & Duronto, where food is included in your train ticket, you will any day prefer for a ticket in those trains. Hope  someone is listening to this.

The compartment was not full and we were sitting comfortably, but things completely changed once we reached Kanpur at 5 p.m. 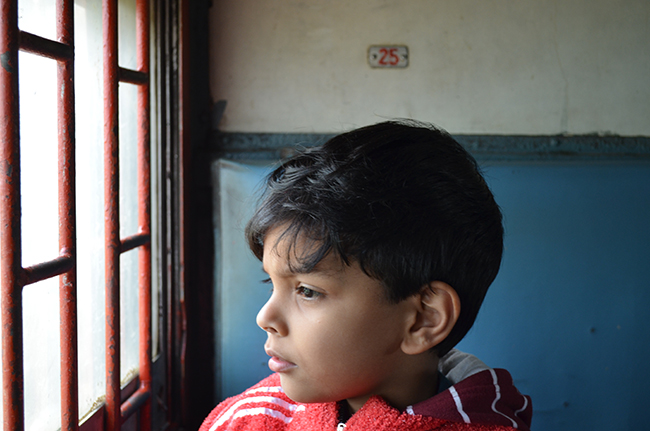 Time to give him a notebook for his travelogues!

“We are also going to Allahabad”.

“Tab to thik hai, adjust kar lo; do-tin ghanta ka hi to baat hai! Din me birth thori na hote hai”. Since we were also sitting, we didn’t mind, but finally we had to compromise our seats with four more person. They are absolutely correct in saying so. Still five person in one seat, just imagine our situation. We didn’t tried to  save our berth or we might even vacate the entire seat for them, if asked and stand happily! Very soon it became over crowded like local (EMU) train. They were occupying the seats in an unfair way but we were completely helpless.  The beauty of the great Indian railway journey, proved right once again. However, after one hour, there was a surprise inspection in the compartment and you will have to see the face of the most vocal person, out of all of them. The saddest part of the entire incident that we couldn’t show our happiness when inspector asked them to pay the penalty and collected money from all of them. However, by the time, we were fed-up, exhausted. We didn’t know when we would reach Allahabad and attending the marriage became a distant dream by every halt and every second. Finally, the journey comes to an end at 8 p.m. and we reached Allahabad, the Tirthraj or the King of Holy places.

Leave it to you to guess! 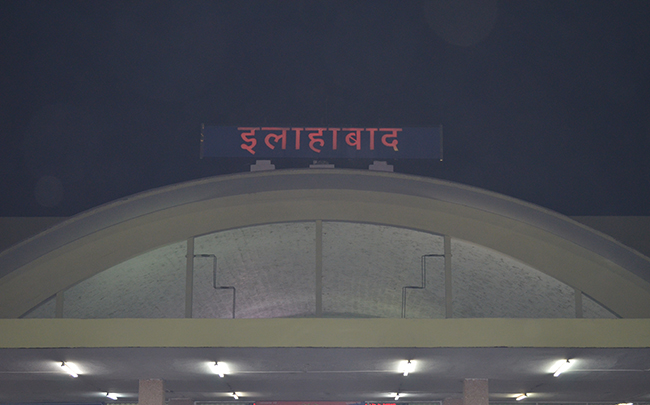 We had a sigh of relief second time since morning. From the station, we went straight to the marriage hall with our suitcase, since the groom had already reached the place. Nice to see the well pitched road. It was my fifth visit to the city and I am impressed with the road condition. Accordingly to locals, Mela administration/authorities have spent enough money for this year’s Kumbh Mela in the last two years and you can feel the difference.

We had a nice time till 1 a.m. and when we call it a day, it was already 1:30 a.m. I knew that I had to wake-up very early to witness sunrise at Prayag. I tried to think about Maha Kumbh, but my body didn’t give permission and very soon, I was also in deep sleep.  It’s only a matter of couple of hours from now, so that should be OK…(to be continued…)