Post our visit to the exotic Phi Phi, we had the landscape of Krabi in mind. As luck would have it, Krabi tour runs only twice a week and was unavailable for the next day. One of the tour agents shared our grief until we told him we had already been to Phi Phi. He then explained that Krabi tour would be almost the same – similar views and snorkeling; only difference being that it was further away from Phi Phi.

He suggested us some other tours, of which the ‘James Bond Island tour’ appealed to us. The Bond movie – ‘The man with the golden gun’ was shot here….back in 1974…and probably the name stuck to attract tourists.  Why in the world does such an awesome place need to market itself with such cheesy names!! Well…probably it is easier to remember than Ko Khao Phing Kan – the actual place in Phang Nga Bay where the movie was shot..also being part of a hollywood movie does put the place on a global platform…same as KungFu Panda 2 might do for Chengdu, China.

Phang Nga Bay consists of hundreds of small and big limestone islands and rocks which just stand out from the emerald green waters. Very few amongst them are populated. The area is famous for its caves and natural limestone formations. 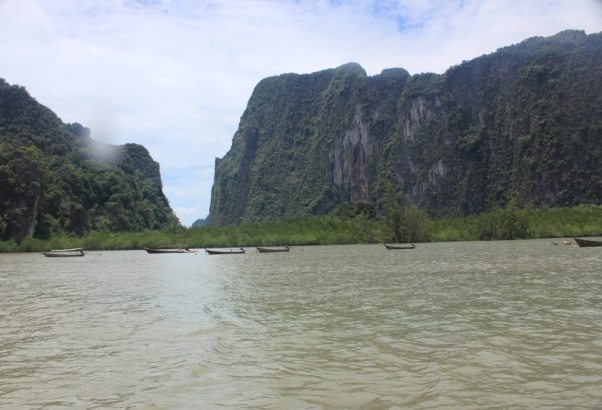 Learning, how this area was formed gives a new perspective to the beauty.Over millions of years, the skeletons from many marine organisms and dead corals accumulated, depositing calcium carbonate and thus formed limestone. The whole area was under water, millions of years ago. The tidal waves created small caves and tunnels in the limestones. The sea level reduced and pushed up the rocks above the water. A variety of other geological forces fractured the limestone beds that now provide the exotic scenery.

Personally, I felt this was even more gorgeous, awe inspiring and eventful than Phi Phi. I also feel that both these day trips are wonderful to do with young children as there is always something to see/do with a safe but adventurous twist. All island stops are within 20-25 minutes of each other. So you do not have to field questions like – Are we there yet …? What should I do now? etc…!

There was a large family from the Middle East, travelling with their grand mom. She had some difficulty in getting into the speedboat as one needs to jump down into the boat. She initially refused, then hesitated and finally was cajoled and helped by someone in family to get inside. Our group of around 20, waited patiently inside the boat and everyone burst into a loud clap on her success! We were happy that we had nice company! 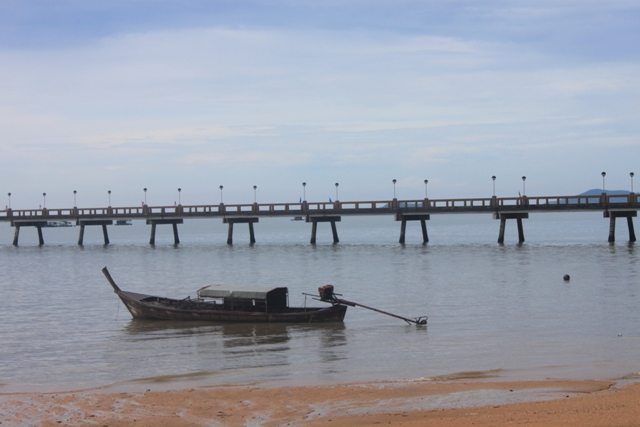 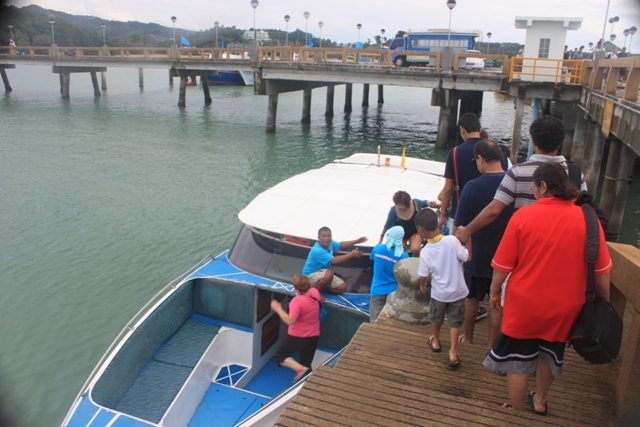 Getting on the boat

Our boat neared a big rock. We kept stretching our necks till Yaya announced that we will be stopping here to actually go inside the caves!

Yaya and boat boys started giving everyone a helping hand out of the boat. Whilst we were debating whether it was safe to step in and out of the boat with Pranav, we noticed that he, who normally is very shy and wary of strangers, stretched out his hand. The boat boy pulled him and placed him on the edge of the rock. All this happened in a fraction and we had no time to protest. Was there anything left to debate now…!  We followed him while mom decided to stay back to be on the safe side. 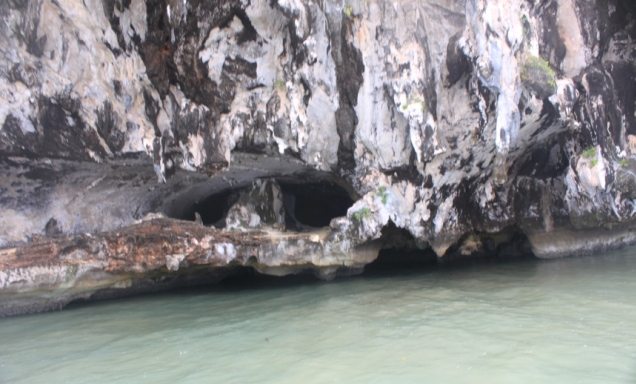 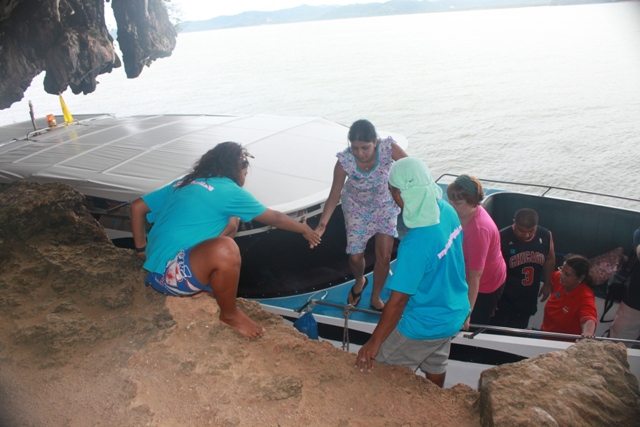 Ya ya helping me out of the boat

We spent some time there, moving through a small tunnel like part to the other side and witnessed some awesome views. 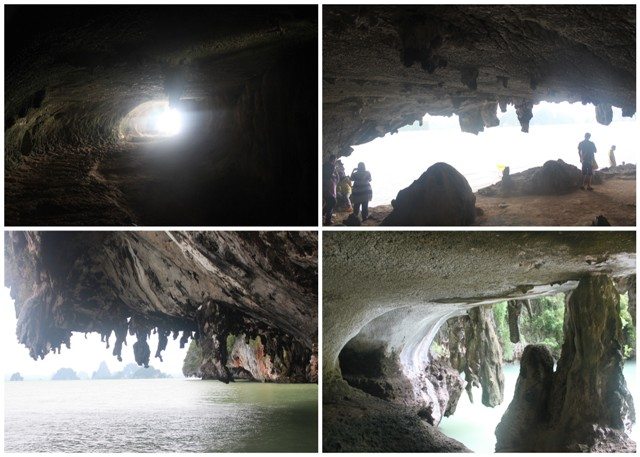 On the way, a boatman was proudly holding a crab, for everyone to see. He passed it on to Yaya, who then handed over to a few co-travellers to evaluate it closely. We learnt that if the crab has eggs inside its shell, it is sold at premium as many love to eat them. We were afraid to even touch it and heaved a sigh of relief when they put it back into the sea, to where it belonged. 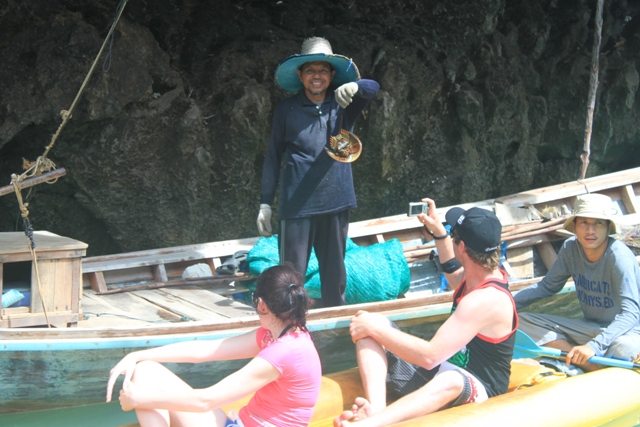 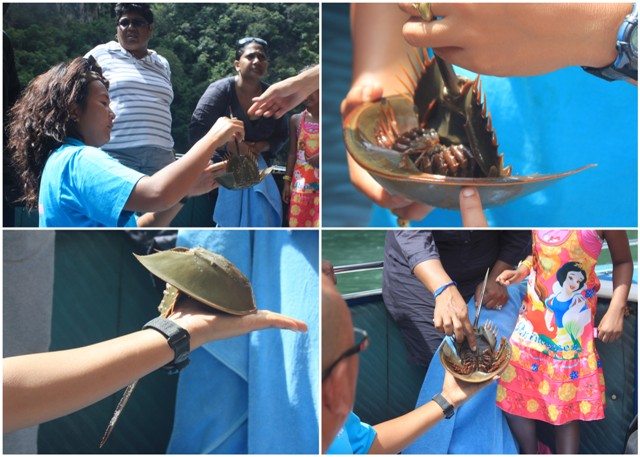 We stopped again for a canoeing experience. Small, colourful, inflated boats, called canoe, could accommodate only 2 adults (and a small child) besides the boatman. There was one more couple travelling with their mother, so we got the moms together on a boat. Everyone donned the life jacket and carefully stepped into the canoes. The young boatman – Sayoo, rowed us slowly away from the shore. 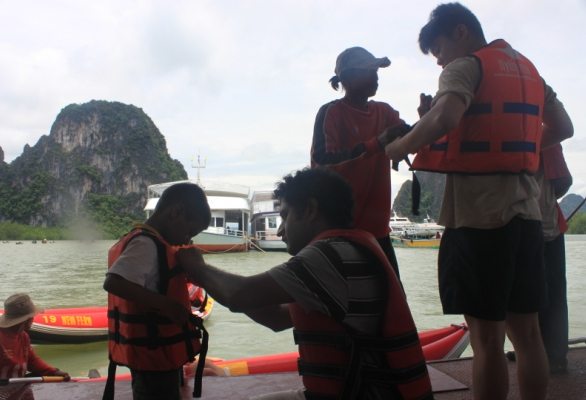 This place is also home to mangroves. Mangroves are several trees of medium height that have adapted to survive in the saline, coastal conditions. As the soil is always waterlogged, it becomes difficult for the trees to get oxygen. So these develop roots on the outside, allowing mangroves to absorb gases and other nutrients directly from the atmosphere. Mangroves store gases inside the roots, processing them even when the roots are submerged during high tide. 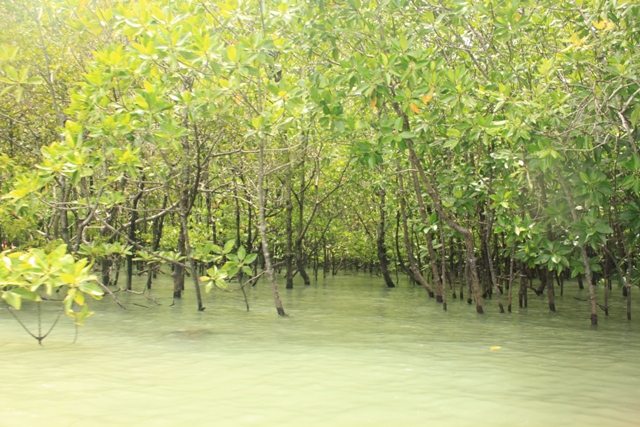 It is also interesting to note that two of the world’s biggest mangroves are in India. Read more here: http://en.wikipedia.org/wiki/Mangrove

Sayoo showed us a mudskipper – a type of walking fish. It was a very small slimy fish perched on the root of a tree. When sayoo made some sound, It literally stood up straight and ran (it does not have legs – it just supports itself on the edge of its tail and pushes by fins and tails) on top of water. It has a respiratory system which allows it to remain out of water. 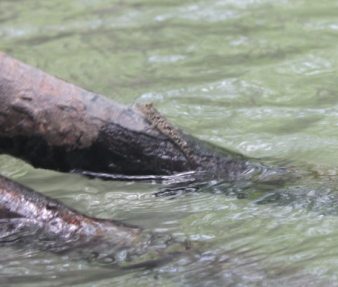 He also told us that some kind of eel is found inside the roots of the mangroves….many locals search for it and take it back home for dinner!

While canoeing, we neared a huge rock which had a small curve at the bottom.  Sayoo, asked us to duck completely on our backs……. we slowly passed through that dark patch, lying on our backs, looking straight into the protruding limestone formations……feeling completely in awe of nature! 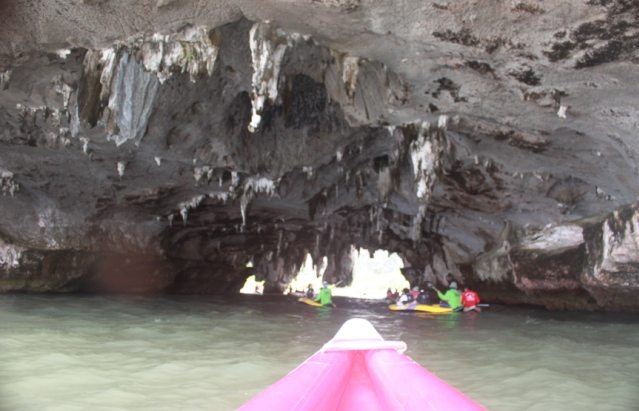 I wonder how did we pass through this

Later, Sayoo, allowed me to row for some time and I completely jeopardized the direction. Handed over back to him after some fun. 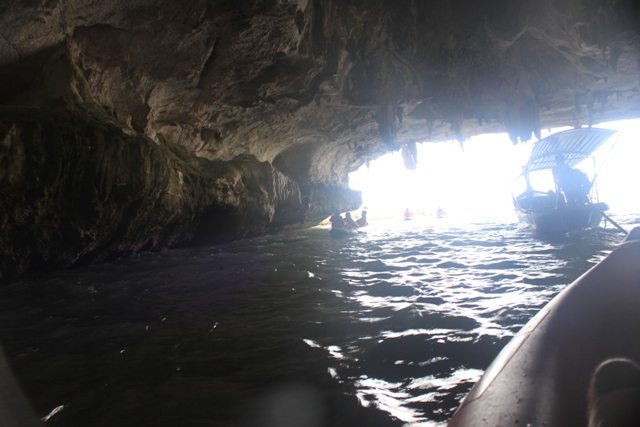 He also showed us some shapes of rocks that people discovered over time.

On striking a conversation, our teenaged boatman told us in broken English –   “Sayoo not go sakool. No money.”I leave you with his image, to ponder, what this gorgeous landscape might mean to him…..May be – Lots of tourists ! 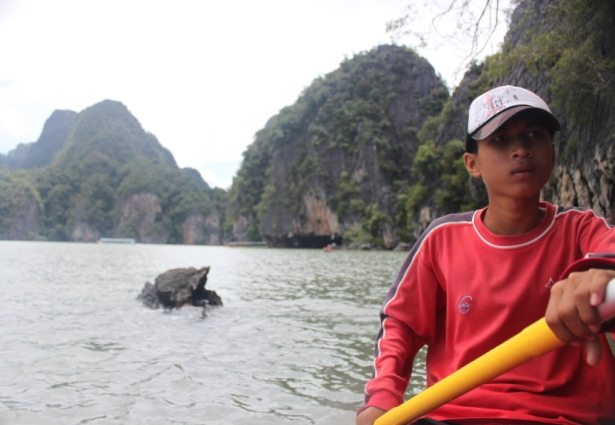 What does beauty mean to him

Phuket (Thailand)- The caves and mangroves of Phang Nga was last modified: June 21st, 2020 by Shubhra