What do you do after an exhilarating canoeing in the sea, amidst limestone rocks and mangroves? Eat Lah (that’s how a Singaporean would say!) The Floating village of Koh Panyee – a maze of houses built entirely on stilts was our lunch destination. Around 2000 people with a Muslim majority, call this place their home. 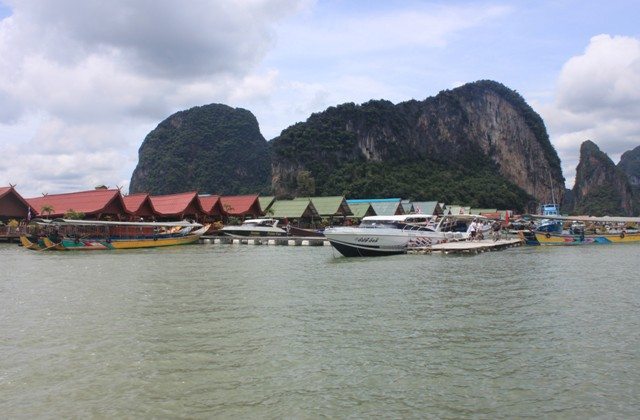 Only way to reach Koh Panyee is by boat

We walked cautiously on the narrow nailed walkway of wooden planks. It seemed that tourism, specifically arranging buffets for tourists, is the main occupation here. We found something vegetarian to eat which was good to survive the day. Post lunch, we just roamed around a bit… 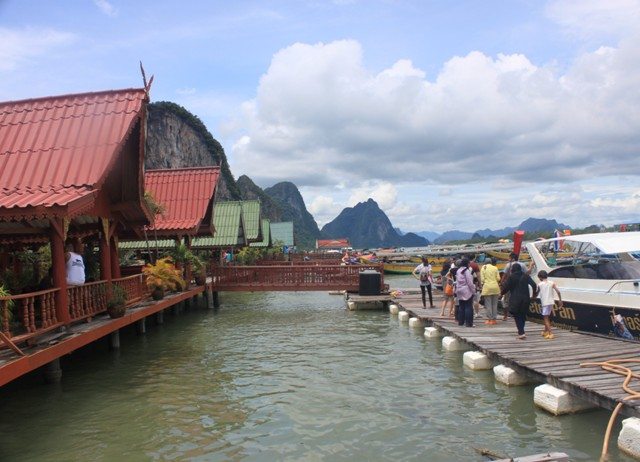 Approach road made of wooden planks 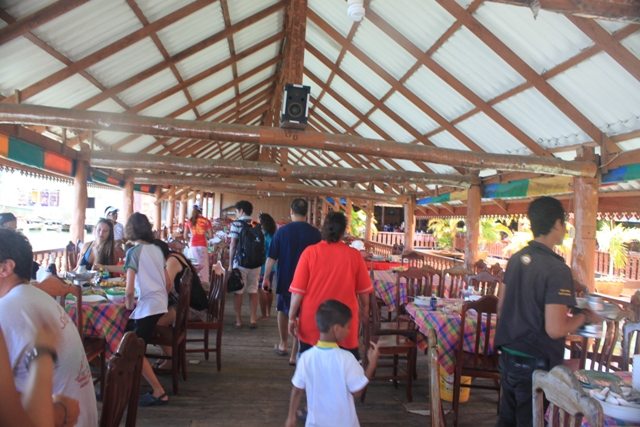 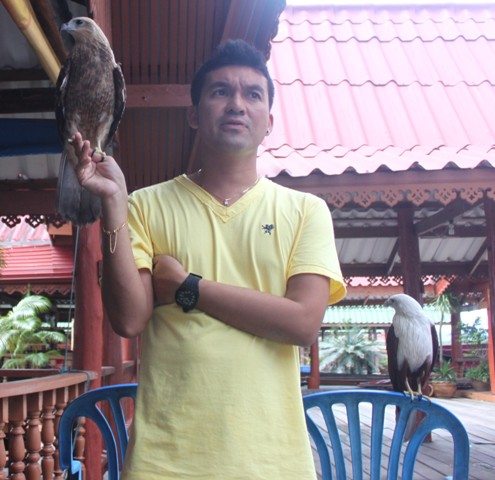 Eagles for rent to pose with

If you are visiting Koh Panyee, gulp your lunch quickly and offer some Baht to a local kid for showing you around the village. It’s just an afterthought – I did not get that idea then…sigh! But I guess that would be a good way to move around the maze and not miss your boat. I happened to see a video (a short film featuring Koh Panyee) which will give you a glimpse on how life can be at such places! Now think twice before complaining about space shortage.

Possibly the most photographed sight in Thailand. The rock which just juts out vertically from the sea, defines the whole area. 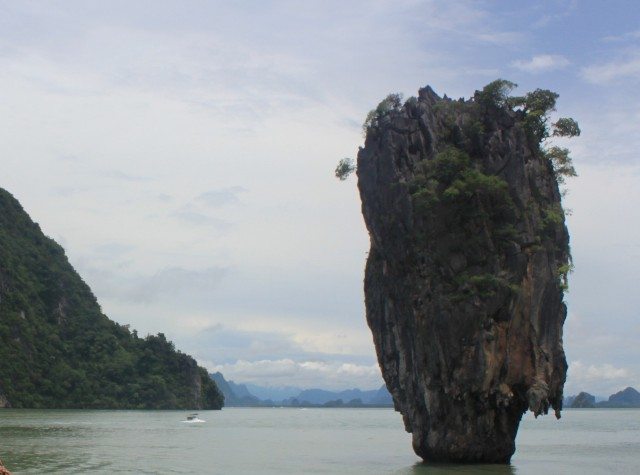 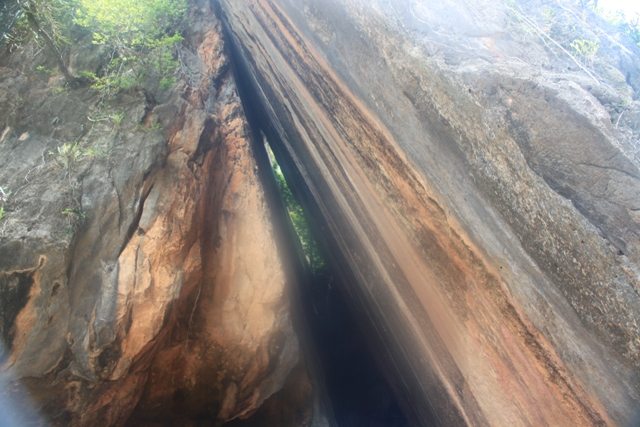 A man docking the boat

Spend some time just gazing. Rest of the time will be taken up figuring strategies to take your picture with koh tapu, without other tourists in frame. Thankfully no pushy aunties here as experienced by Devasmita at Niagara.

A lot of small shops were selling trinkets on this island, surprisingly, nothing to do with Mr. Bond.

So people…bargain hard (I am obviously not the best person to tell you How!), better still, avoid buying anything here. Just look the other way and enjoy the view.

Our last stop was a relaxing white sand beach where we hired chairs, rubbed some sunscreen and relaxed, while we were served fresh fruits by Yaya and group. If you want to experience water sports like banana boat ride, jet skiing and parasailing, you can do it here. As the water currents here were not as strong as in Patong, we decided to try jet skiing (15 min for 700 Baht). We asked the scooter walla to accompany us for some time till we felt comfortable. 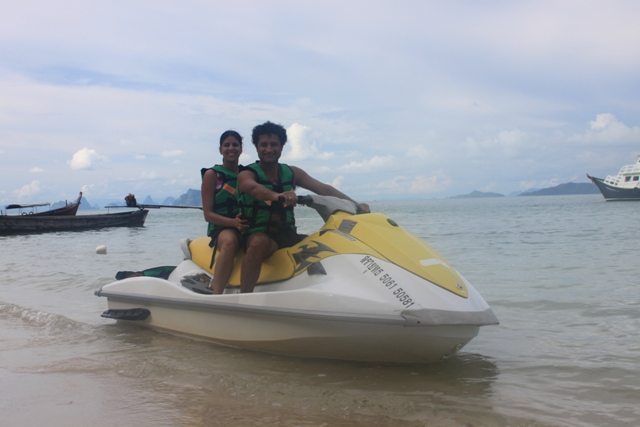 The key is to have a good control on the handle and maintain a steady acceleration. It was scary and exhilarating at the same time. After a while we became confident and ventured further on high speed. Taking a turn was tricky and it’s better to do it carefully while you are still a novice. On a jet ski you are quite close to the water and can clearly see how the waves are moving, how the colour of the water is changing according to the clouds and the corals or sand on the sea bed. Remember to have your sunglasses to save the eyes from wind while speeding and lots of sunscreen to avoid sun burns.

15 minutes seemed quite good for the first time experience. If we survived… then anybody can (unless you are very afraid of water in which case why come to Phuket)! I suggest try one of these while you are here.

We reached back to mainland by evening and were dropped to our hotel. Similar to the Phi Phi tour, this too was inclusive of drinks, water, fruits, lunch and canoeing which was all extremely well organized. Grab your sunscreen, cap, sunglasses, some Baht, some snack for munching on the boat and just go…!

We still had the whole evening to us and so we had time for ….yes you guessed it…our customary visit to Kai. She suggested us the Simon Cabaret show. Now my only memory of cabaret is of Helen dancing from one table to another. But this one is with a twist – it is a stage show preformed by the transgenders of Thailand – the ladyboys as they are called. Yes, it sounds extremely tacky…but was surprisingly an enjoyable medley of the famous songs and dances from around the world. You could clearly make out that there many different nationalities in the theatre and where they were seated ‘cause you heard the loudest clap from them when the song from their country was on stage…..so we clapped loudest at dhoom tana….from Om Shanti Om and goodness …they performed almost the full song ..complete with lip sync and were looking as stunning if not better than the SRK and Padukone duo!!

I bet you cannot make out the gender of the performers unless you knew beforehand or till you see them outside, after the show. As soon as they speak something…there you go….! When we came out of the show all the participants were standing in a line which reminded me of the Miss India stage. We were one of the first ones to walk out and as there were strict instructions not to use your camera at all in the show, we were unsure of whether to click or not. We were also unsure on whether to stand and stare or keep moving….! Before we could get rid of the dilemma, the rest of the crowd started to jostle to get close to them and smile for the camera. (I think I saw people hand some money in their hands after the click but am not sure). Now it became difficult even to click from a distance as we were being pushed from all around…so managed only a few bad shots..! 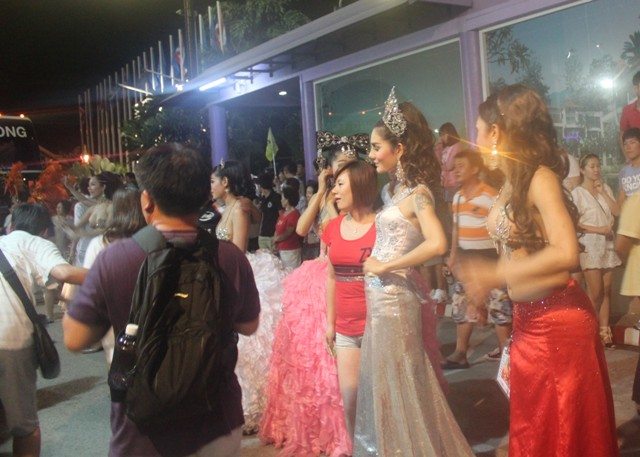 And thus ended the third eventful day in Phuket. We decided to do a tour of Phuket on our fourth and last day of the trip…so that’s what is coming up in the next post.

After the mandatory getting-lost-and-going-round-in-circles-before-finding-the-destination that we seem to do in most new cities, we reach our destination after 2 solid hours of wandering the drowning streets of Ghatkopar in a downpour worthy of …. Mumbai! The thing to note is that more time was spent in negotiating the traffic (read: stuck in traffic) than driving!