As you read in last post of Jageshwar, how our new year eve was spoilt, But leaving that aside, we were ready for our next destination, the Patal Bhuvaneshwar, taking our last photo of Jageshwar. 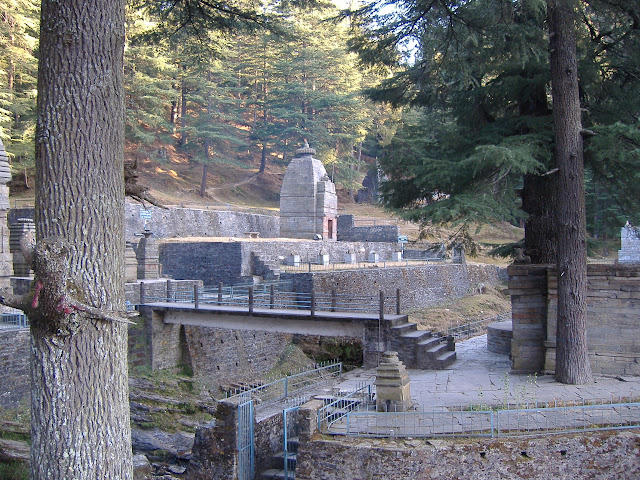 Some info about Patal Bhuvaneshwar as gathered from net

Patal Bhuvaneshwar is one of the most fascinating places of the Kumaon region, is a limestone cave temple 14 km from Gangolihat in the Pithoragarh district of Uttarakhand state in India. It is located in the village Bhubneshwar. Legend and folklore have it that this underground cave enshrines Lord Shiva and thirty three crore Gods. The cave is 160 m long and 90 feet deep from the point of entrance. Limestone rock formations have created various spectacular stalactite and stalagmite figures of various hues and forms. This cave has a narrow tunnel-like opening which leads to a number of caves. The cave is fully electrically illuminated. There is a folklore that the Pandava brothers passed their time here during banishment. It is built due to the flow of water. It cut the rocks in such a fascinating way that it looks like that any artist had made those entire statues within the cave & on its wall. It has some cave opening and it is believed that these opening will be close as the centuries pass on. The scientific fact is that it’s still being developed due to crystallization of the minerals which are dissolved in the water. As per belief, some doors which are now closed were opened thousand of years back. It’s yet to be fully explored. It is also believed that this cave is internally connected to the four abodes /seats (Char Dham).

We left Jageshwar around 10, refreshed and forgetting the horrible incident of yesterday night. When we came out of Jageshwar road, there are two ways to go to Patal Bhuvaneshwar. The normal and shorter route is that we turn towards Almora and 5 Kms after Jageshwar turn right and passing Bare Chhina, Shera Ghat and by-passing Beri Nag, we reach Patal Bhuvaneshwar.

The other road, we were told is longer and lonely. So we decided to take this longer route, because we had enough time and I am so happy to drive on lonely roads. We turned to our left towards Gangolihat. The road was Ok for most of the parts and we hardly saw any car crossing us. Occasionally 2 or 3 trucks passed. The scene was beautiful and awesome. 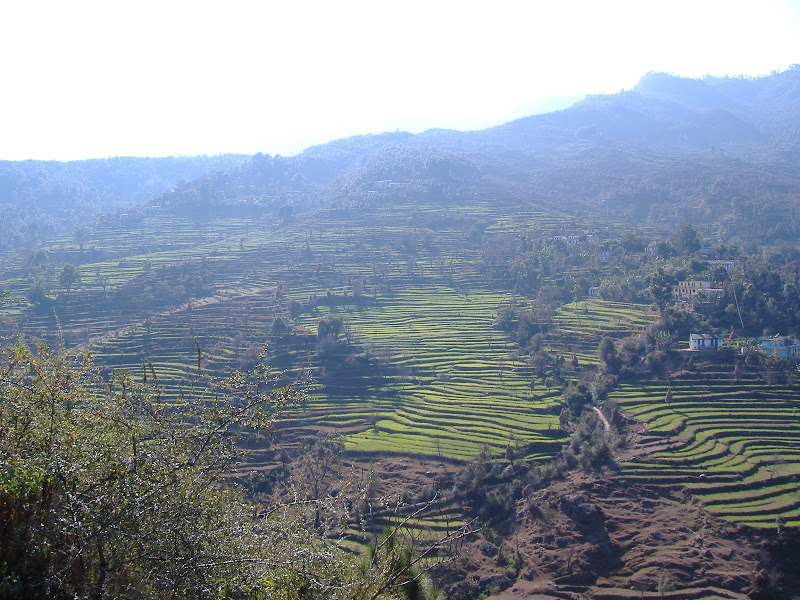 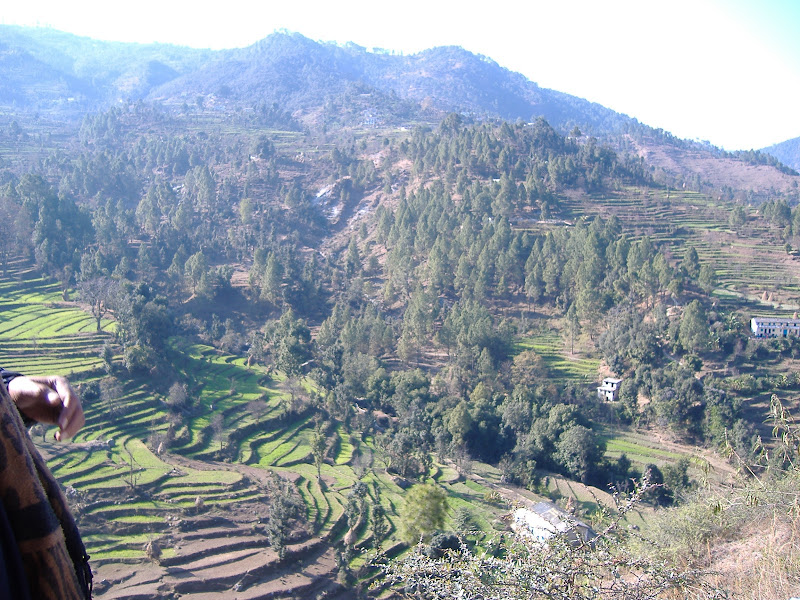 On way to Patal Bhuvaneshwar

From Gangolihat there are two roads one going to PithoraGarh and the other towards Berinaag. We turned left on Beri Nag road and a few Kms turned right towards Patal Bhuvaneshwar. We had booked 3 rooms in KMVN rest house, which is just near the cave. The rest house has only 4 rooms and as usual, had breathtaking views of the Himalayas and the valleys. About 300 meters from KMVN is the cave of Patal Bhuvaneshwar. 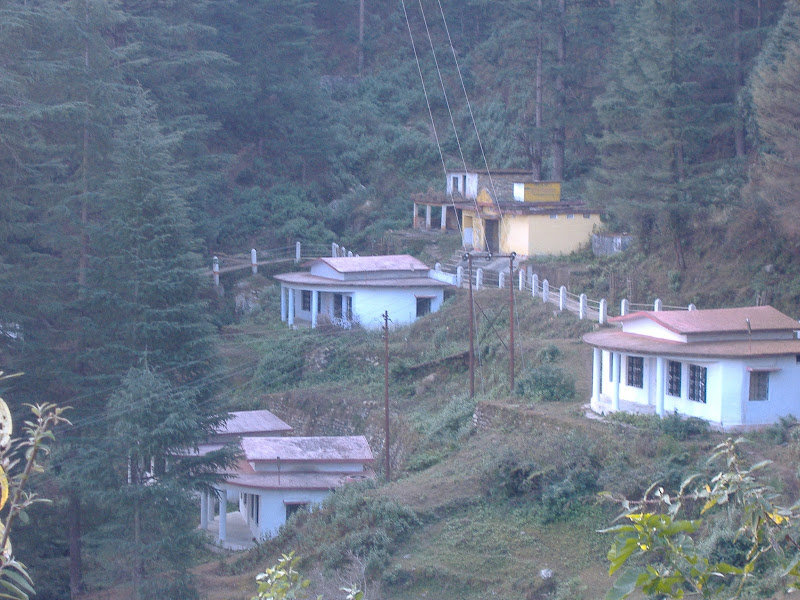 Path towards the cave (Right)

The entrance to the cave is very small and there are no stairs to go down the cave. If we see from the entrance… it looks like a well going down the nether lands. My wife was very reluctant to go down, but the guide, who was a young boy of 25 from the same village persuaded her claiming that no one ever fell from the stairs (?). The guide was really very helpful as he would hold feet of my wife and keep them on the correct place and then guide her to slip down slowly. I think the depth is about 90 feet down.

When we reached the cave, we were surprised to see such a huge place inside a solid mountain. Due to some volcanic eruptions molten rocks, iron, copper and zinc had carved some beautiful sculptures in the cave. The guide explained how this cave has been mentioned in Skand Puran and showed us around.

The shapes were so clear that one need not explain. We could easily figure out that it is a peacock, or a snake or a cow. The miniature Amarnath model was so clear that we all recognised it before guide could tell us. The forms were made by molten rock and metals… and I can not imagine, how perfect shapes were modeled by chaotic flow of molten mass of rocks and metals.  It looked like a blue prints of all the Himalayan temples. If we go by guide’s version almost all the pilgrimage places in Himalayas were there. … some we recognised ourselves some were forced into our mind.

They do not allow cameras or mobiles inside cave, so we could not take any photo. I got one foto from net which is below

Shiv Jata made with molten rocks and zinc

We reached the main shivalinga which is called Patal Bhuvaneshwar. The legend is that this linga was so powerful that anyone worshipping it would get what ever he wished. Later Shankracharya visited here and seeing the strong energies of linga, captured the energies by putting molten copper on it with some tantrik ritual.

above shivalinga, are three idols of shiva vishnu and brahma. Suprisingly water was dripping on shiva and vishnu but Brahma’s idol was dry…. has it some connection with the fact that no where in the world Brhama is worshipped and there is only one temple of Brhama (in Pushkar).

Then we saw a big round plate of rock which had a pointed stone nail in the center.  As per guide, this pointer represents our yuga and this is growing upwards.  The day it touches the roof, the gates of cave will be closed automatically and our yuga will end.  We were relieved to see that there was still enough distance left between the pointer and the roof …. at least enough for  us to get out of the cave :).

One more suprising thing about this cave was that there was water dripping all around, but the water was not collecting anywhere. There must be some hidden outlet for the water. Another surprising thing was that the air inside was pure and full of oxygen..we did not feel any bad smell or difficulties to breathe. There must be some natural outlet and inlet for air, hidden from the eyes. Whatever it was, Nature had done her all duties well !

We thanked the guide and paid him his charges… my wife was so happy with the boy’s help that she tipped him extra for letting her see that wonderful place. 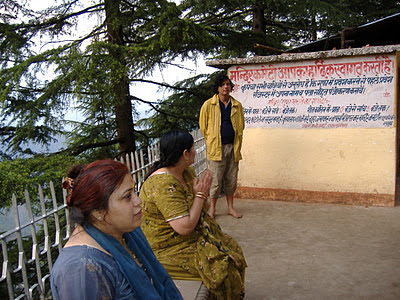 My daughter Kan really liked the place and counted it as one of the natural wonders in the world. We remembered our visit to Jetta-gretto caves in Lebanon which had rock formations too.  They were fascinating too but the religious stories attached to Patal Bhuvaneshwar caves gave it an extra thrill, as watching the stories of hindu mythology with some natural rock formation was something like a special treat.

We came back to rest house, slept there and next day morning had a stroll in the village. The Himalayan peaks are so beautifully visible from KMVN rest house that you see them with mouth open. 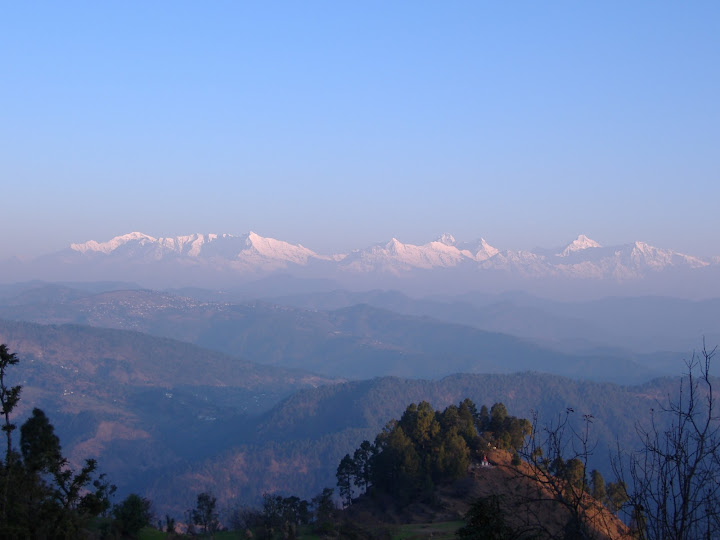 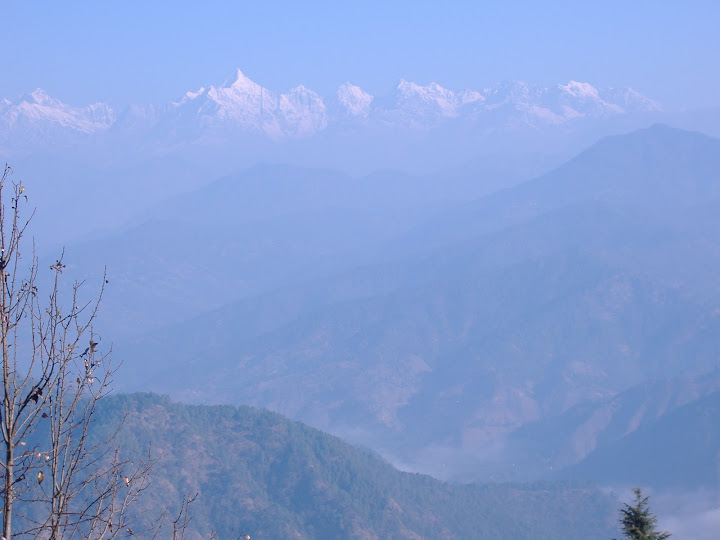 Can you name the peaks ?

I could only locate Nanda Devi peak due to its peculiar shape. If someone knows name of other peaks, please tell.

In the village we met a group of young village boys, who showed us small temples around, which had ancient artifacts…some of which looked like more than 500 years old. 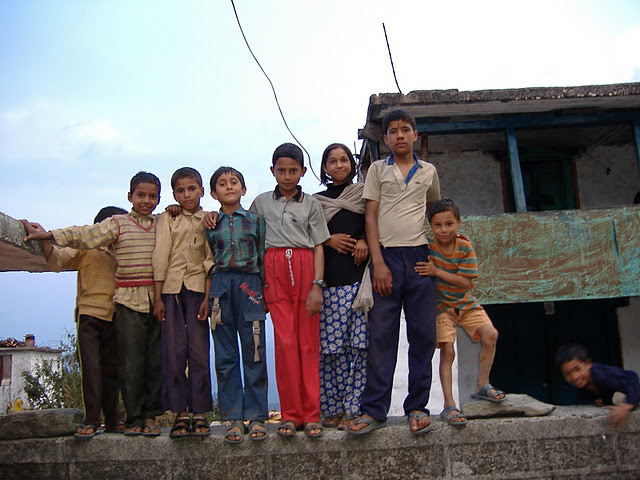 the team of good village kids 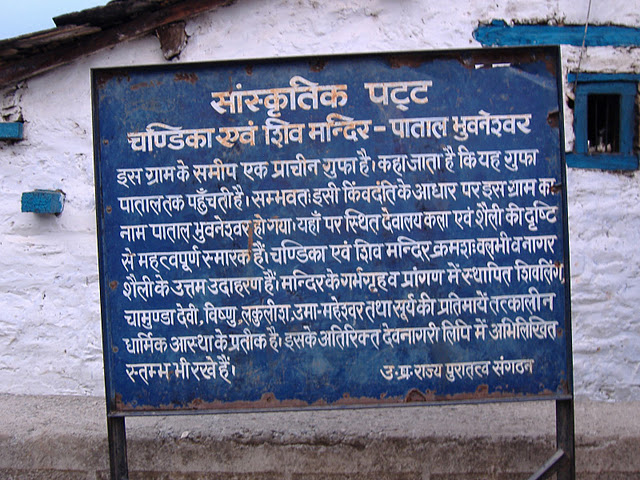 Info about the caves

The boys and gals were so happy with us that they chanted Aum Namo Shivaye with us and our chorus echoed in the valley.

We left Patal Bhuvaneshwar happily, this time via Beri Nag, Sheraghat and Bare-chhina. In the way Shan got a friend who seemed to be very fond of him 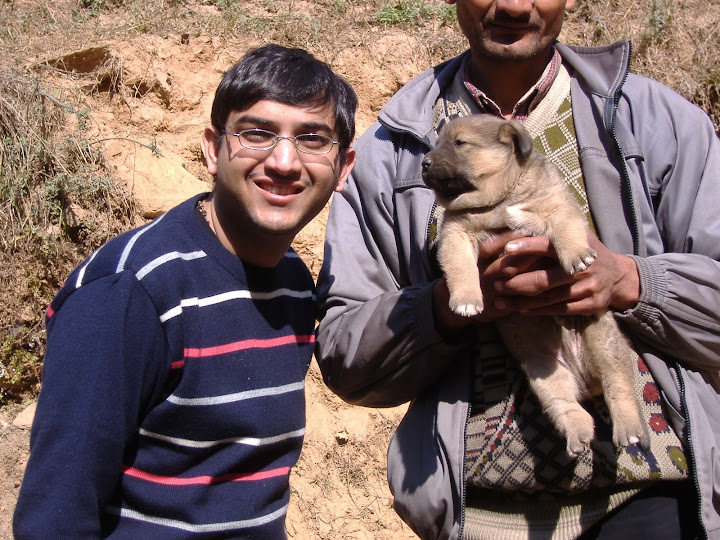 Shan with his new friend – PILLU

On the way we stopped at Kainchi Dham and enjoyed the Jal-jeera there after seeing the temple.

Around evening we reached Nainital. The mad rush of new year walas was gone and Nainital looked peaceful. We got 3000 wala rooms for 1000 each and enjoyed our cosy evening chatting about the experience.  Unlike Mussorie & shimla, Nainital has still lot of charm left and the Naini lake adds beauty to it.  Nainital is also becoming a concrete jungle but the Nature still has upper hand on it. 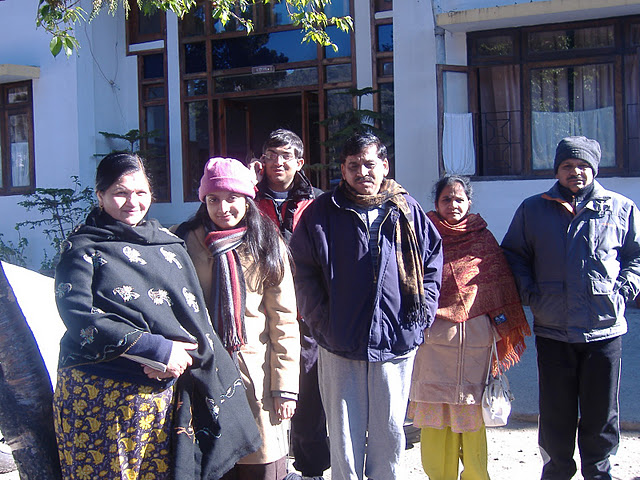 Now some photos of Nainital ! 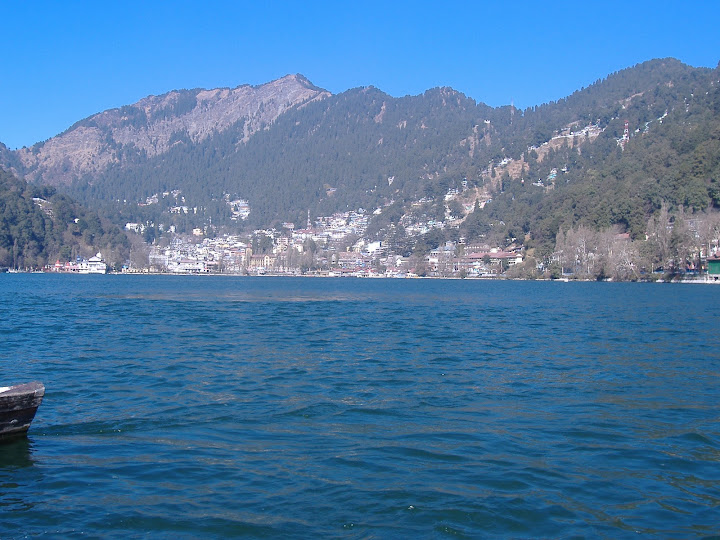 Another view of Naini lake 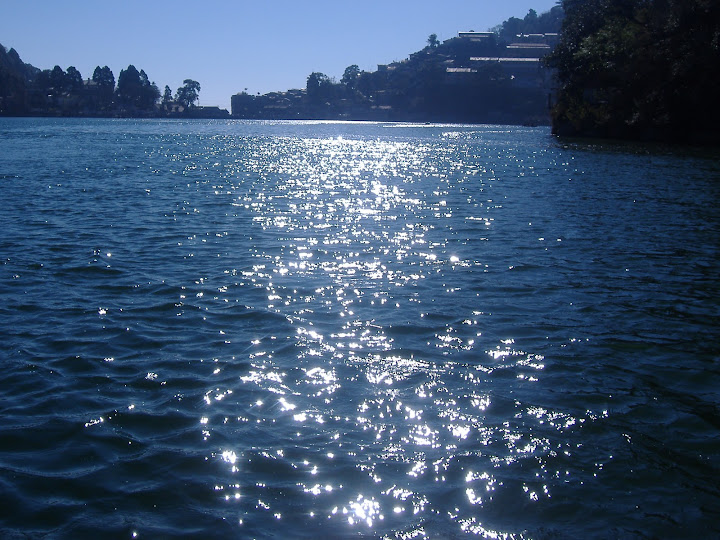 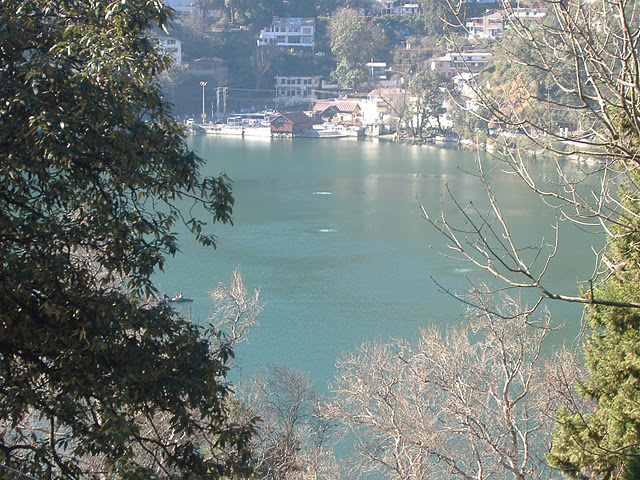 Naini Lake from our Hotel room

After cooling our heels in Nainital, for two days, we finally returned to Delhi. 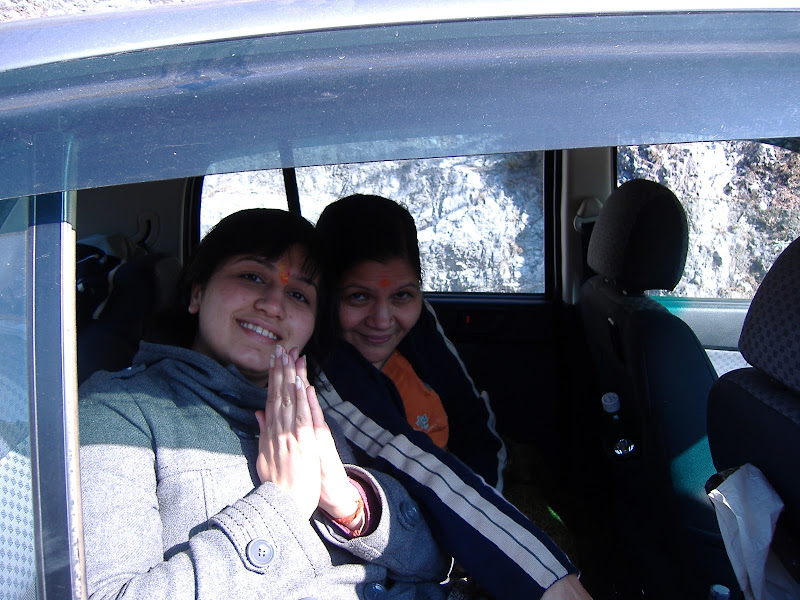