﻿﻿﻿I drove from dakpathar to Delhi yesterday with my family while returning from Paonta Sahib.It was a beautiful drive as you drive past vikas nagar on yamunotri delhi road through the scenic hills with excellent road.But as you are nearing saharanpur,the road starts getting bumpy making you wonder whether to continue on the same highway or take an alternative route.I called a friend who strongly advised me to take a detour via rourkee,as it was not safe to drive at night the shamli to delhi road via baghpat due to security concerns.That meant going offtrack to rourkee,which didnt appeal to me.So I decided to go ahead to shamli and turn to panipat instead,on way to Delhi. 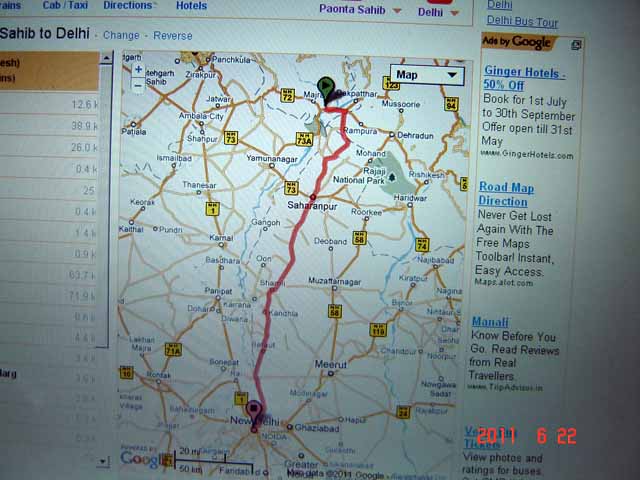 Route from Dakpathar to Delhi which we travelled mostly. 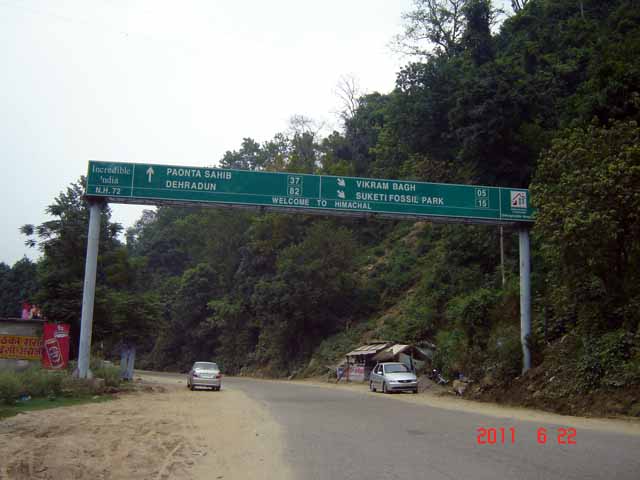 Road from Nahan to Paonta Sahib 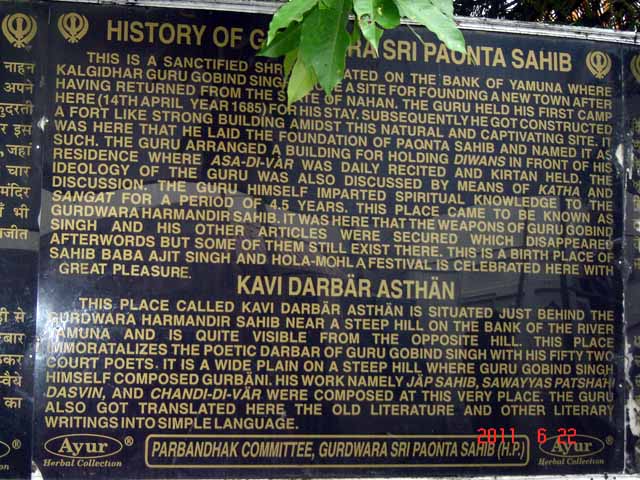 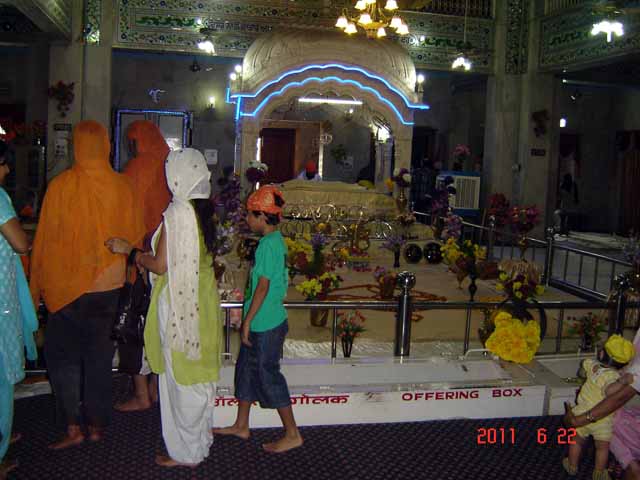 Well,that was the biggest blunder of my trip.The road from saharanpur to shamli is a history.It might have existed once upon a time,but its extinct now.Its not just about potholes but,its actually deep craters all along,putting your car and driving skills to ultimate tests,which was not the right time to practise late in the evening with family onboard.Well,I was lucky to traverse the stretch without any mishap,but a distance of merely 58 kms from Saharanpur to Shamli took good 2 hours and 45 minutes of pain and anxiety. 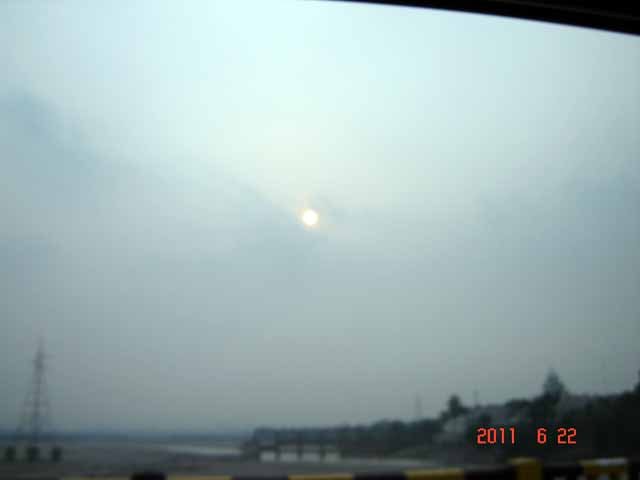 Me and my wife were cursing the politicians for robbing taxpayers hard earned money including ours,without returning any value for it,and only reaffirming our support to Anna hazare’s movement. After crossing shamli I thought the stretch to panipat would be smooth,but although it was better and motorable, but not as smooth as I was expecting it to be. Just when I thought the worst was over,I got caught in the long jam between trucks on the bridge over Yamuna due to toll barrier ahead while crossing from UP to Haryana.We kept asking ourselves,why cant there be separate lanes for trucks and cars and do away with this everyday ritual at most border points,which is totally avoidable and sadistically man made harassment zones? Do we call it toll barriers coz it takes it toll on us for displaying utter patience and keeping our cool. 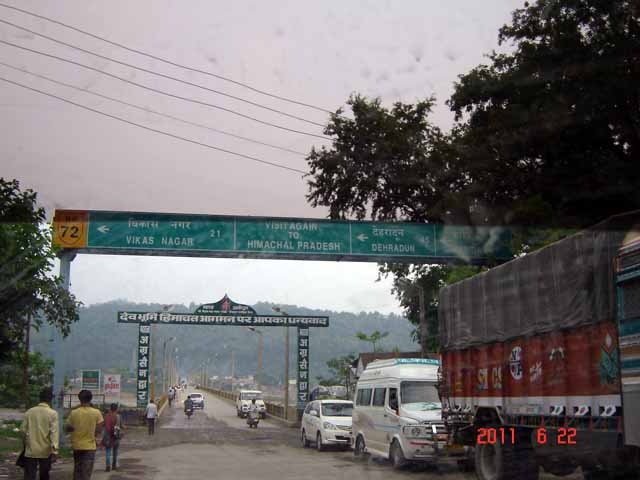 Bridge near Paonta Sahib,crossing from Himachal Pradesh into Uttarkhand 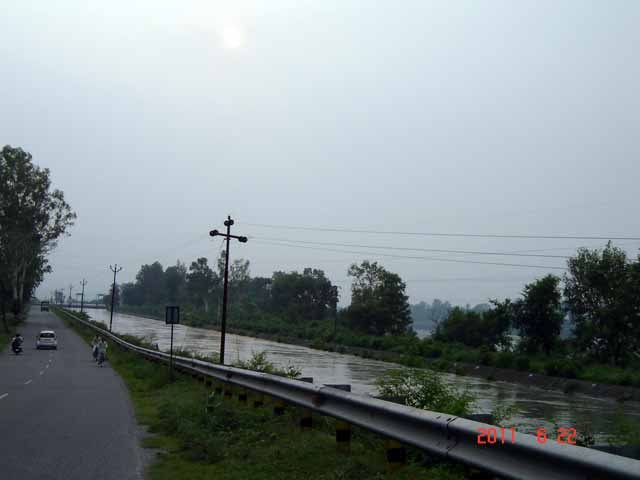 Road to Dakpathar along the Yamuna canal 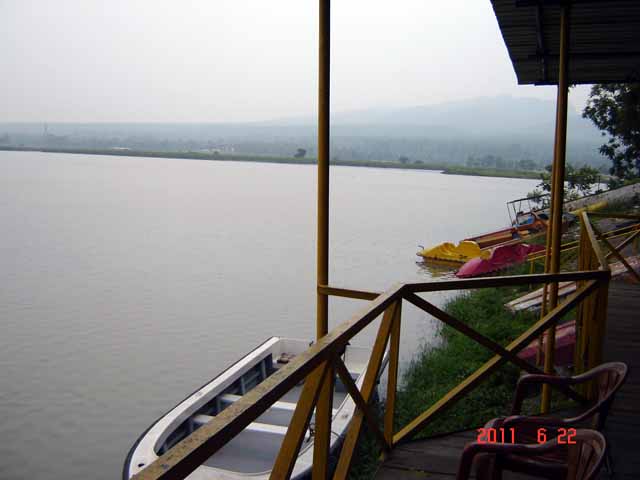 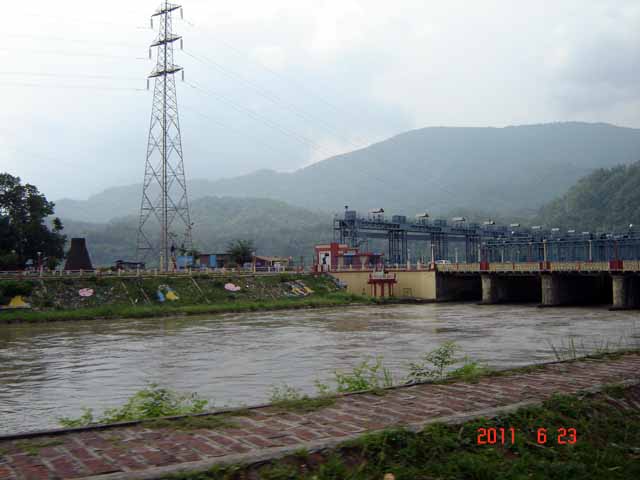 And while waiting at the bridge for over an hour I realised the bridge has either outlived its life,or was born with congenital defects,as it kept shaking while the trucks moved on the opposite lane,not just the vibrations which could be felt like during an earthquake,but visibly so as you can see yours and other vehicles shaking up and down,while waiting for the traffic to move. Pathetic!

As you finally touch the National highway at Panipat towards Delhi,its a big,feel at home kind of relief,even before you have reached home.I finally took a break at 2 am in the morning at much heard about Sukhdev Dhaba (must try for those who have not done it yet),a real happening joint on the highway at Murthal.Its like daytime even at night and made us come alive again after the harrowing journey behind us. 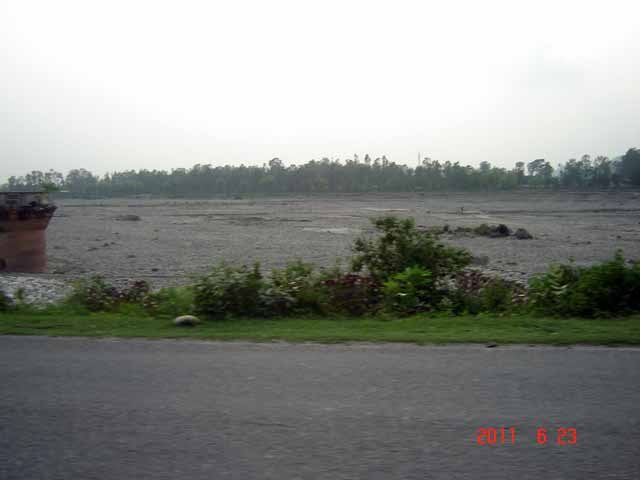 on way back from Dakpathar to Delhi via Saharanpur

Finally,I covered the distance from dakpathar to delhi in good 12 hours,which was otherwise targetted within 7 to 8 hrs max.

I have shared some pictures which are not directly linked to the text but taken during the day journey.

Moral of the story:
Specific:Dont ever take saharanput shamli route in the near future,till you are sure its redone.
General: Dont ever take any offtrack routes (other than main highways) unless you have prior information on the road conditions….more so in UP,where road condition,crime prone belt and night travel makes a deadly cocktail….

Our driver suggested us to stop at a point where you can enjoy Elephant Ride. We were first not in a mood but considering our little daughter will have some fun, we decided to stop by. Then we had to think again about taking a ride as they charge quite much for a 15 min ride. 350 rs per person was not a fair deal but innocent and disappointed looks on daughter’s face persusded us to go for it. I was afraid of the ride at first but once the elephant started moving it was very enjoyable. The ride takes you back to childhood age and you want to scream loud in happiness and glory of sitting on an elephant. The only thing that disappointed us was the condition of elephants and the rude way in which they were being treated.  I had a pity on poor animals.