Roaming in the Cheetal Garden Resort on Delhi Haridwar Highway we started discussing how 15 different people have come together for their love for nature.

It all started in Mid April when a circular on our Office Notice Board invited names for Mani Mahesh trek in Himachal. It struck me that this opportunity cannot be wasted. Being a regular traveler because of my interest and my work, I had done some small treks earlier but this was my first hit at a full trek. The day was spent searching internet about the route, weather, travelogues etc. I was sure that I have to do this. The biggest problem was the same age old boss-subordinate story. Will he allow me? How to convince him?

Just then a colleague of mine called and said,” chal rahe ho na?” I said haan and that’s it. Name along with cheque and medical fitness certificates were submitted. Luckily the manager too agreed for week’s leave. After about a week, a meeting of the participants was called.15 members were there. Our leader was a regular trekker having completed more than 10 treks successfully. He started explaining what to expect and then someone said that we have researched extensively on mani mahesh so why not do something which is tougher and has some surprise element in it. And then our dear sir said -Auli Kuari Pass from 23rd may. 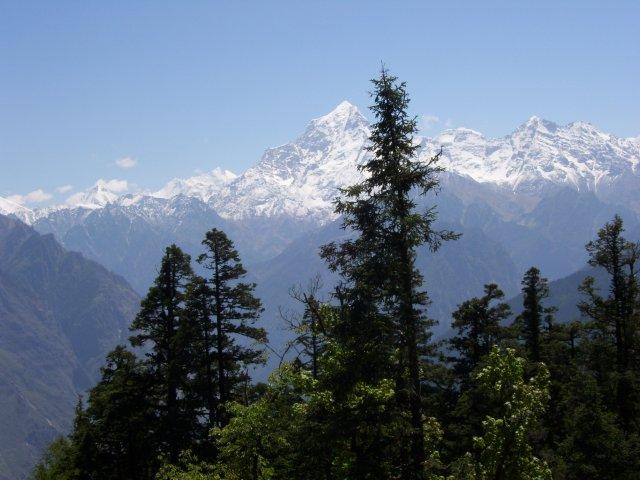 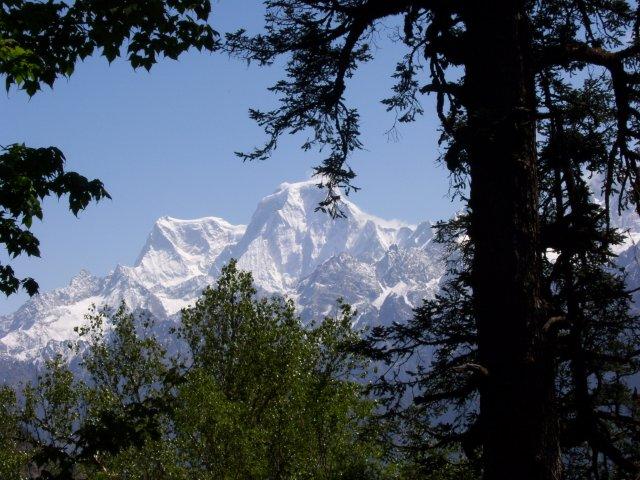 Another view of the snow-covered peaks

DAY 1 -23rd May 2009 – Noida to Devprayag – We left from Noida early morning in 3 vehicles.Nice breeze was blowing.We had tied our sacks, ropes, tents and ration on our vehicle tops. We drove nonstop till Cheetal Grand on the Delhi Haridwar highway where our first break was scheduled. People were still coming to terms with each other. Trying to know each other. Seniors were there as well as their juniors. After a light breakfast we left for Rishikesh where our next stop was scheduled. We reached Rishikesh on time for lunch. After being in the car for a longish duration we started roaming around in Rishikesh. Someone found a stream of Ganga flowing and went in. All of us followed and thus started a series of water splashing and playing. Relief from May heat and the Ice had melted between the team members. We knew then that the trip is going to be a big success. After enjoying, we had our lunch in the wet clothes and then we left for Devprayag which was our destination for the day. We checked in at GMVN in Devprayag. We had a dormitory. After having tea we left for Ganga Aarti at Dev Prayag. It was a sight that will be with me for years to come. After returning back from there we chatted, charged our cameras and then we slept.

DAY 2-24th May 2009 – Devprayag to Auli (via Joshimath) and then acclimatisation walk till Gairson-The day started early in fact very early. We got up to a wonderful view of mountains, trees and river. After roaming around GMVN we had some amazing paranthas and curd. The paranthas were so delicious that then and there we decided that we will have them again while returning back. We started from Devprayag and drove till Joshimath. The route is a typical Mountain route with sharp curves .We crossed Srinagar and some Prayags (joining place of various tributaries of Ganga) on the way. We reached Joshimath at around lunch time. After having lunch at Joshimath we left for Auli. People can also opt for Ropeway from Joshimath to Auli but we took our car as everything was already packed in the car. We also met our trek guide and his team of cook and porters at Joshimath. Joshimath to Auli is a stretch of around 20 kms but it’s a very steep climb. It was chilly at Auli. Auli is a popular winter sports destination. We took out our jackets and had our sacks on our backs. Then we started the mild acclimatisation walk towards Gairson. It was an hour’s walk in the bugiyals followed by about half an hour’s climb in the forests. After we reached Gairson, we all were very excited as most of us will be sleeping in the tents for the first time. And that too in such a lovely location surrounded by trees and mountains. Our guide taught us to erect tents and then he served us with hot maggi which was our dinner for the night. After having maggi, we slept in the tents. 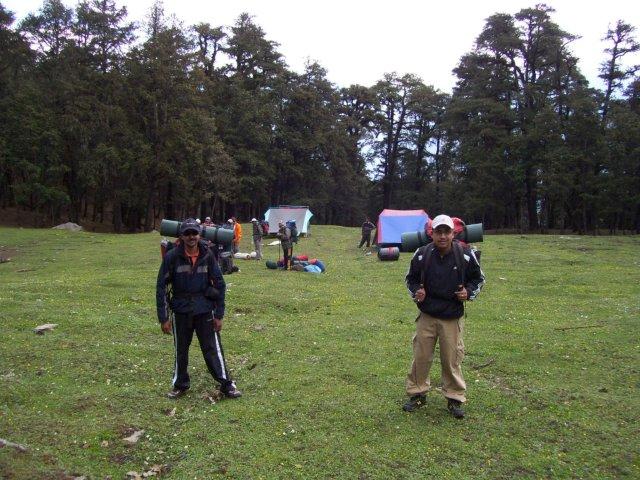 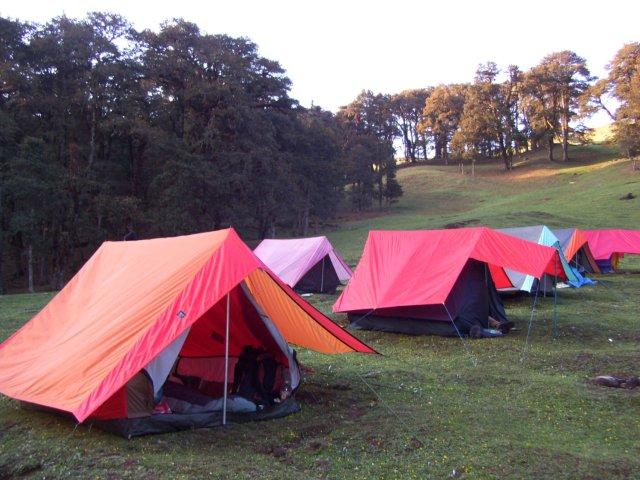 DAY 3 – 25th MAY 2009 -Gairson to Chitrakantha – The day was to be long and hard. We got up, tents were folded and sacks packed. After having a light breakfast we left for what was to be first day of our trekking expedition. Amazing bugiyals, surrounding peaks, flying birds can make you walk miles without feeling the pains. After walking for some time, it started raining. And luckily or unluckily we were at a stretch which was to be the most dangerous stretch of the entire trek. Sharp edges, narrow path over stones and slippery ends was making it very tough for us. The stretch is such that you cannot stop also over thereafter somehow crossing the stretch it was just an easy walk till we reached Chitrakantha. It was a small area surrounded by trees and this was our camp site. We had tea and relaxed. Then we started roaming around. After having lunch, suddenly the weather changed. From being bright and sunny, suddenly clouds appeared and it started raining. We went inside our tents. After some time it stopped raining. Then we came out and it was really cold outside. We arranged for bonfire and then had a sing n dance session. After dinner it was again sleeping time. We went inside our tents unaware of the night which we were to face. It started snowing. And very heavily too. We all were sitting inside the tents and shivering. Somehow the night passed. But next morning was amazingly beautiful. White snow was all around us. On our tents, on rocks and even on leaves of trees. We played with snow and then left for our next destination. 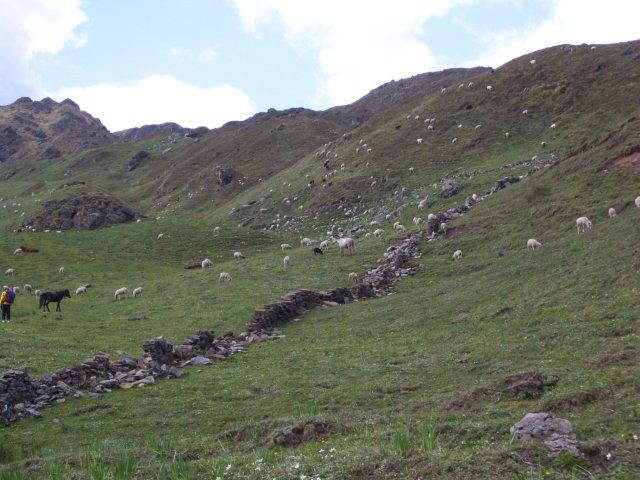 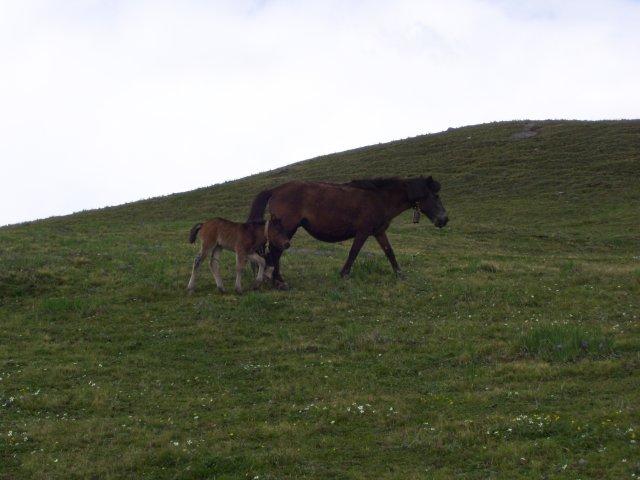 Horses on the way to Chitrakantha 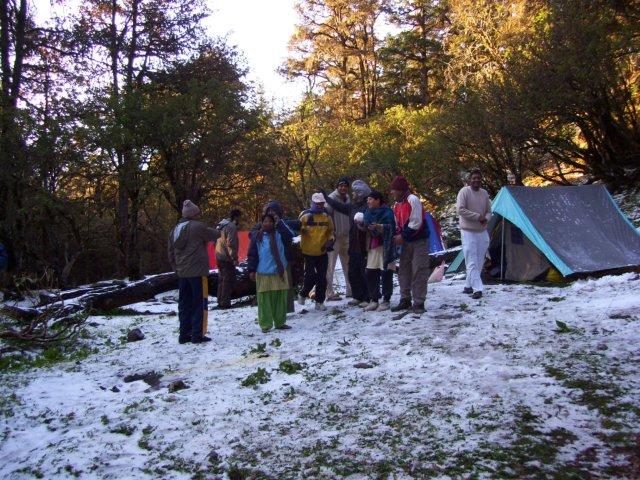 DAY 4-26th MAY 2009 -Chitrakantha to Khulara-Today it was normal trek for about 4-5 hours to Khulara. We walked at normal pace. By today we had acclimatised ourselves well and our pace was good. We reached our destination on time. Then after relaxing for some time, our guide managed a football and make shift bat and wickets. We played football and then had a long hit at cricket. It was real good fun. 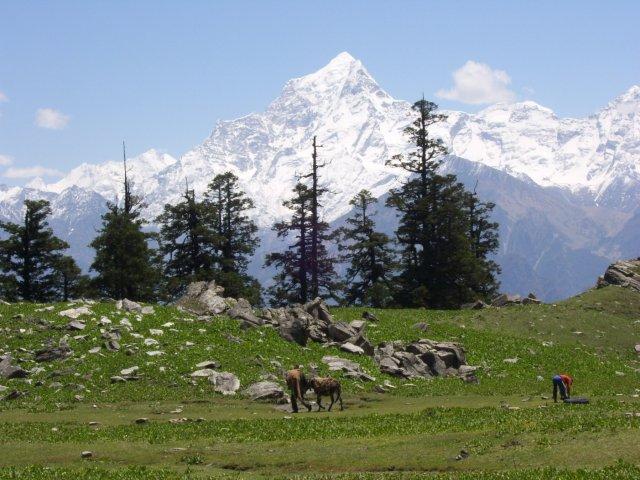 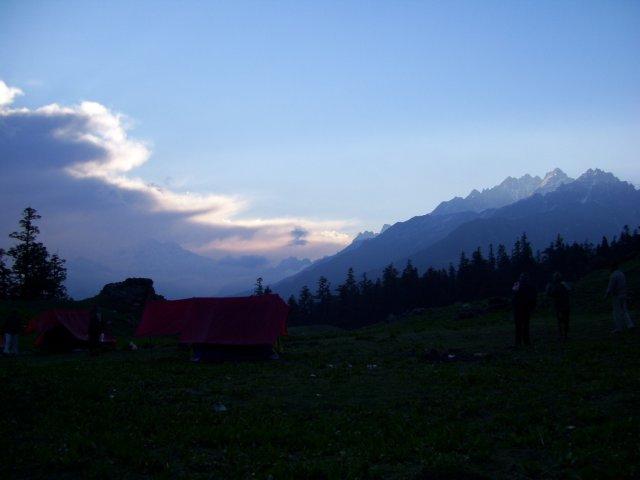 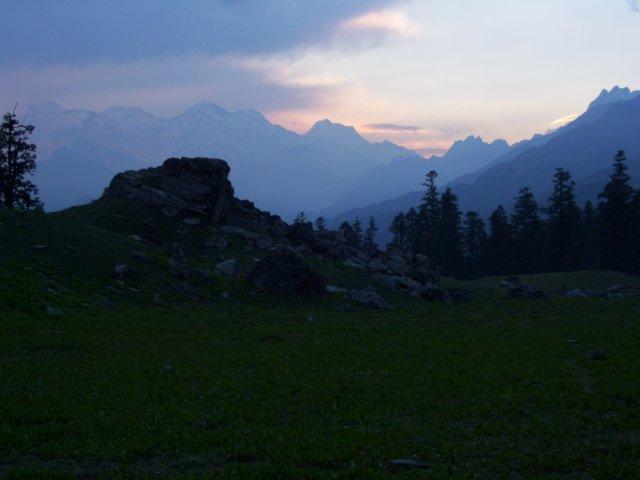 Khulara – Hills in the background

DAY 5-27th MAY, 2009 -Khulara to Kuari Pass and back-Today was the Day. We were informed by our guide that this stretch has to be completed real fast as the weather can change anytime. So ideally we should be back before noon. The stretch was a steep climb throughout. Though the distance wasn’t much but the steep climb can take toll of your stamina. We were helped by the fact that we were not carrying our sacks. We reached Kuari pass and it was a picture perfect setup. Grasslands, mountains wind everything was there. We met some locals there who had come to pick some local fruit which is used as a herb in ayurvedic medicines. They told that it is their only source of income. And believe me they earn a lot. After spending some time there with the locals and with weather deteriorating we started descending. We came down to our camp at Khulara hugely satisfied and relaxed. We celebrated with song and dance. Rest of the day was spent wandering around. 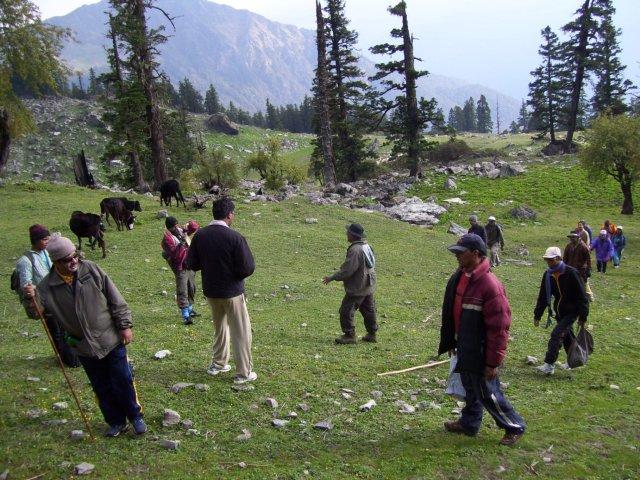 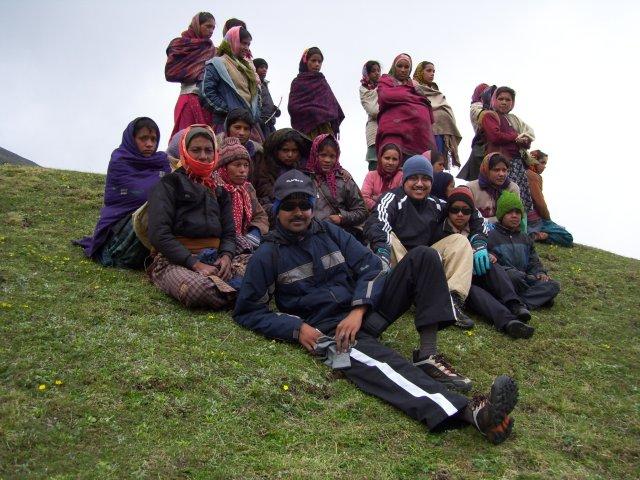 DAY 6 -28th May 2009-Khulara to Tapovan and to Joshimath -We started a long journey downwards pretty early. Today it was going to be a tough one. People regards climbing up as tough but in my view getting down is equally tough if not more .It was a long stretch of 10-12 kms and we crossed bugiyals ,forests ,walked alongside streams, witnessed rainfall until we saw some huts. We were extremely tired. We reached Tapovan extremely soaked. We called our family members after 3-4 days. Then we hired cabs for Joshimath. We reached Joshimath in the evening. We bid farewell to our guide and porter there. We stayed overnight at GMVN, Joshimath.

DAY 7 -29th MAY, 2009 -Today we wanted to visit Basudhara falls. We reached MANA (last Indian Village) by car and from there we walked till Basudhara Falls. It was a walk of 5-7 Kms amidst absolute beauty. After spending some time at Basudhara we got back to Mana and from there we went to Badrinathji Shrine. We took bath in the hot spring and then prayed at Badrinathji. After that we slept overnight at a local guest house. 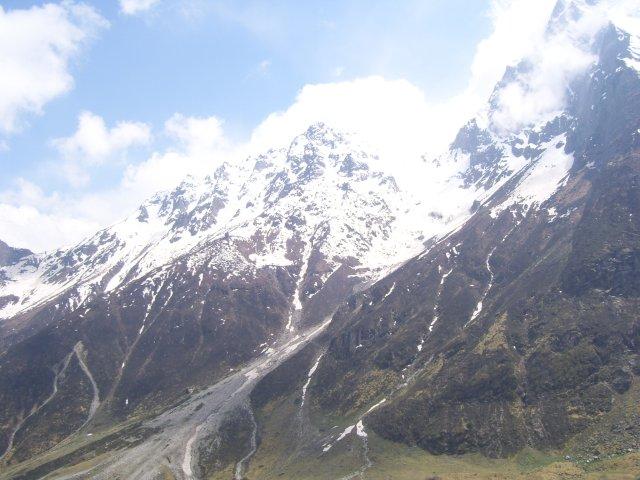 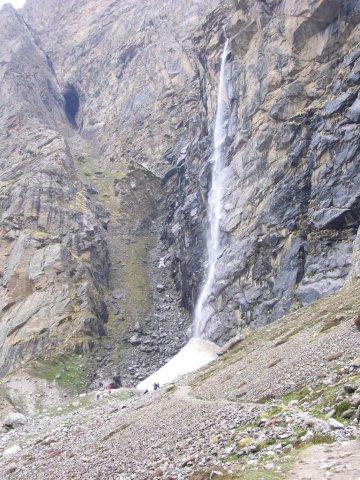 DAY 8-30th May, 2009 -We left for Devprayag today and reached there by evening. This was the same route we took while going.

DAY 9 -31st MAY 2009- We left Devprayag early for Shivpuri. We wanted to River Raft so we decided to take a break at Shivpuri. We river rafted from Shivpuri till Laxman Jhula in Rishikesh. The rafting was full of thrills and totally different from the kind of adventure we had for the past few days. Then we departed for Noida. We reached our homes at around 7 in the evening after an enjoyable and satisfying trip to the Himalayas.

P.S.-Do not use plastics while on a trip. Save Water, Save Forests

ghumakkar loves serendipitous moments, when one comes across something remarkable but totally unexpected. I had such an experience a few minutes after landing in Cairo. The drive to the hotel from the airport was rather uninteresting as the architecture was pretty drab, just row after boring row of grey, rectangular concrete blocks . All of a sudden, I saw a building which looked like a Hindu temple…