We visited Tulip festival first time in April 2002, and after that it was a yearly to do event. I didn’t knew about Tulip festival till my friend Amit asked me if we are interesting to go there coming weekend. I said yes, I was having office provided rental car that time, and pretty excited for a long drive. But my friend shattred my dream saying that he will take his car as I am not not an experienced driver in United States, I argued for some time without any luck. Anyway, it was a sunny day, not very common in Seattle, we took I-5 North towards Vancouver, I-5 connects West side of Canada and Mexico, passing through Washington, Oregon and California states. We were 3 families and it took about 2 hours of drive as I-5 is crowded, seems that everybody was driving towards Tulips. We took Exit 231 for Tulips, and I think it was wrong exit or it was much closer to Tulip fields.

Prasad, one of the other friend, took the charge as guide as he was supposed to be knowledgable about different Tulip fields. There are multiple Tulip fields, and you can see different colors of Tulip flowers like red, yellow, orange, white, magenta, some mixed color Tulips. We entered the first field, and it was the WOW moment, a Kodak moment, “Dekha 1 khwab to ye silsile…” moment. As it was a sunny day, place was crowded, everybody was taking pictures, we also settled ourselv and took few pictures. I didn’t had a any camera that time, so I was completely dependent on my friends. 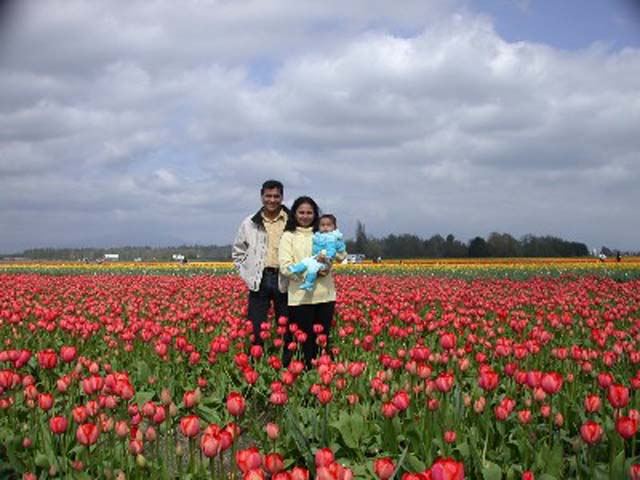 After some time, we moved to another field, we saw a yellow carpet of flowers on our right side, we were about to enter that field, then Amit relaized that these are Daffodils flowers, looks beautiful from distance, they are somewhat bigger then the Tulip flowers, their leaves are little apart comparing to Tulips. We moved towards another field, according to Prasad, it would be the best field, called as Tulip Town. We reached there, paid $2 for car parking, and entered the field. Yes, it was beautiful, you can see the Tulip flower carpets of all the possible colors of Tulips along with Mt. Vernon in the background. There were few small airplanes and helicopters were flying over the field. We got to know that people can take airplane or helicopter ride for Tulip field tours, ride is somewhat expensive like $175 per person for an hour. We spend some time and planned to go to another field, it was almost 3:30 PM and everybody was hungry, so we decided to enjoy the Tulips from road itself and have some food. 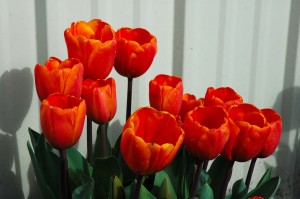 While coming back, it was very bad traffic on Tulip field roads, it took us about an hour to reach Freeway. We had food on the way and came back with beautiful memories of Tulips. I asked Amit that what these farmers do with Tulips, according to him, they grow Tulips for nothing, it’s an old tradition in Skagit Valley and they celebrate the Tulip festival in the middle of Spring season. They don’t make any money from the Tulip flowers, they charge for parking to maintain the fields and they also sell Tulip bulbs.

Next year, 2003, we planned with few bachelor friends and a newly married couple friend. Bachelor’s were posing for one of the best picture and I was asking newly married to pose like “Bhabhiji, thoda romantic”. This time I was having my camcorder with built in digital camera. Ujjwal grew bigger and enjoyed the Tulip fields.

Next trip was with my mother in April 2004, we were planning her trip since long and she was delaying without any reason. Then I told her that I want to take some of your pictures with Tulips and I have booked your ticket for April 11th, which will be middle of Tulip festival. As soon as she arrived on April 11th, we went to Tulip festival the next day. I took few pictures with a disposable camera, not great pictures, but good. We were a group of about 7 families, on the way back, we went to a nearby place called “Deception pass”, had a picnic lunch and came back.

Next trip was in 2005, my friend Nitin was visiting US from Delhi and I insisted him to visit Seattle during Tulip festival. I promised him for a best picture for his marriage. Tulip were on their full bloom, this time I used my D-SLR camera and managed to take few nice shots. 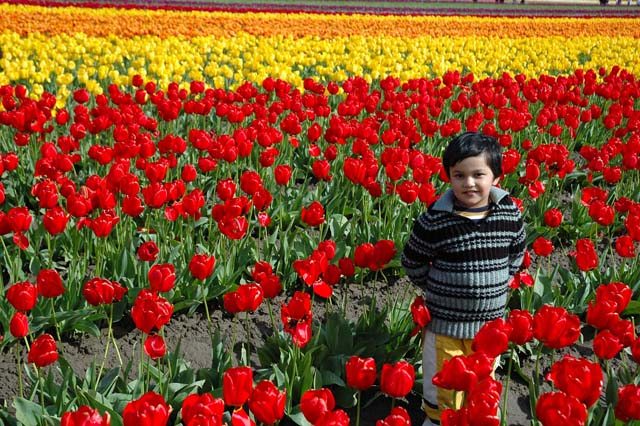 Here comes year 2006, and this time we visited 2 times to the Tulip festival. Two of my friends, Akhil and Sanjiv made a trip to Seattle for Tulip festival and Akhil was promised for a “Tulip-family-picture” for his living room. It was first week of April, there were not many fields with full bloom, but we managed to find couple of fields for “Tulip-family-picture”. Next visit was in the last week of April when my sister in law visited Seattle. This time, Tulips were about to go and there were only couple of field left with Tulip and rest of them with Daffodils. We had 1 more person this time, our daughter Navya, she was about 8 months old. 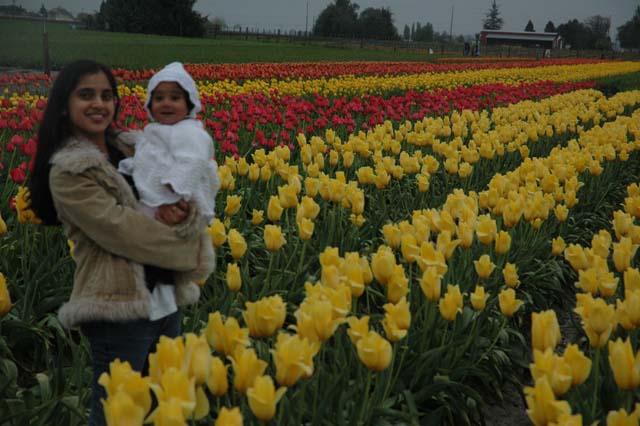 New addition Navya’s 1st visit with her Masi in 2006

All the Tulip visits in last 5 years were memorable, I marketed Tulip so well that my friends/family specially planned their trip to Seattle during that time. Whenever I took the picture of a bachelor during Tulip festival, he got married the same year.

Question: Can we see Tulips in India?
Answer: Yes, in Kashmir during month of March. 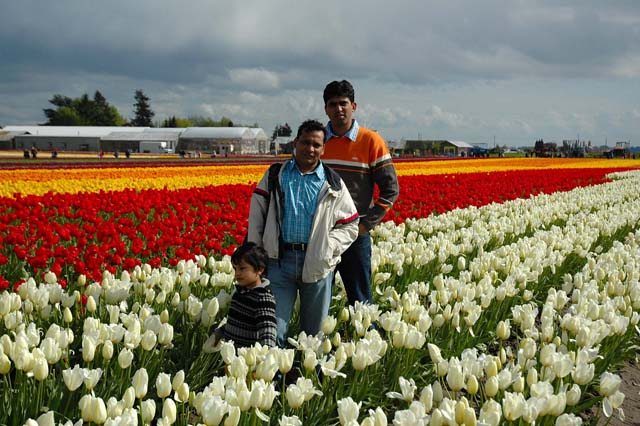 Daffodils, friend visiting from Delhi in 2005 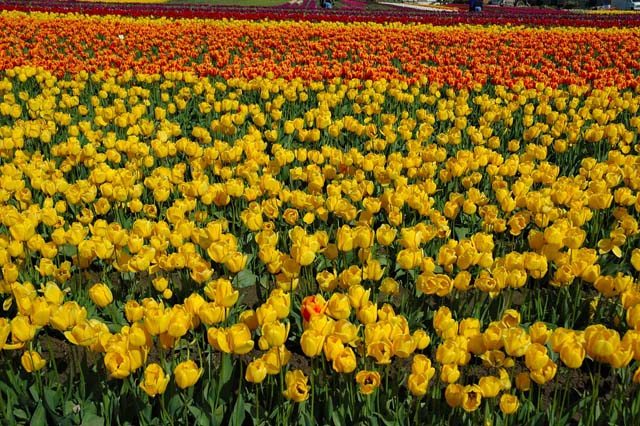 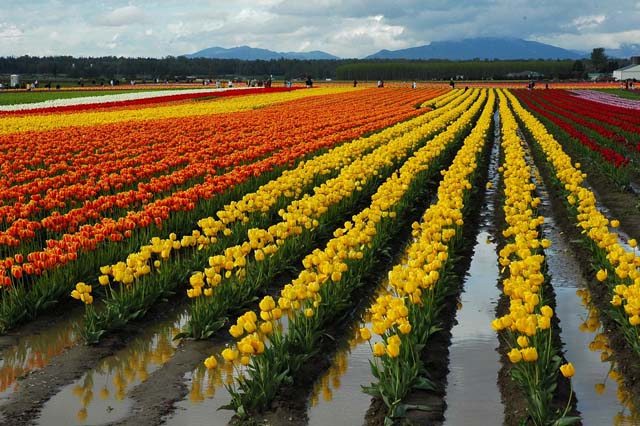