After performing Puja at the Pushkar Lake and at Brahma Temple, we had returned to RTDC Hotel Sarovar, where we were staying for checking out. As per initial plan, we were going to visit the ruins of Bhangarh, which was touted as the most haunted place in Asia. Departing from the city of Pushkar was not easy. Every one of us wanted to spend a few more hours, if not days, in that city. Pushkar was like an oasis to us and with its leisurely pace it was giving us a different kind of pleasure. In my opinion, one should stay here for a longer time, if the leaves are not any issue. For us, that was a big issue and so we had to move out of the Pushkar City.So, with a heavy heart we left Pushkar and started our journey towards Ajmer.

Last day, we had seen the faded signboard on the Ajmer-Pushkar Road indicating the route towards the Old Pushkar Lake. It was situated just before the start of Pushkar Ghati, from therea narrow road branched off towards that lake. By that faded signboard placed at the junction we could again identify the route and entered into the Old Pushkar forest area. It was a single patchy road. It was quite deserted too with no habitation, except a hotel named “Jollywood”. Occasionally, one or two motorcycles came to our way or crossed path. We had to cover a distance of about 4-5 kilometers on the single lane forest road to reach the Old Pushkar Lake. 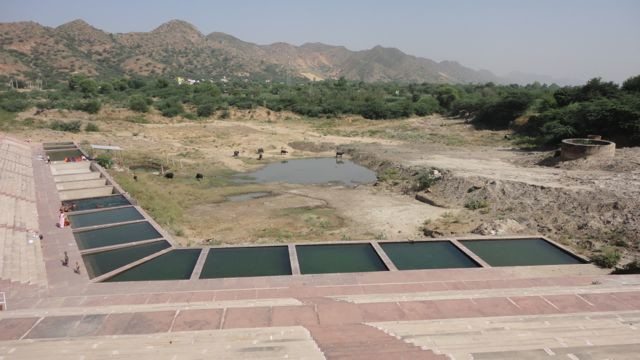 The Old Pushkar Lake was dry. Buffaloes were feeding themselves in its dry bed. Here and there some attempts towards conservation of the lake were visible. But they were mainly some symbols of a beautification drive than a proper conservation or repair of the lake itself. Beautiful temples were constructed all around the Ghat. Proper steps were also recently constructed. In order to preserve some water, a few tanks were constructed. But, overall it was not a happy sight to a dry lake. Later, I came to know that such drying of that lake was a result of excess use of chemical fertilizers in its catchment areas. Due to use of chemicals, much soil erosion took place and that caused sedimentation in the lake. Gradually, that old lake, which traced its origin since the time of Mahabharata, dried up. Ecological imbalance and its result were clearly visible to us. Standing there, I forgot to do any puja in those temples. My mind was only thinking about the dry lake and was searching for an answer to the menace of chemical fertilizers. Is there any possibility to revive the drying lakes around us?Seeing a dry lake was so sad that we did not go near the water tanks built for the purpose of taking bath, though some families were enjoying there.

In 2006, Vasundhara Raje Scindhia, the Chief Minister of the state had started some movement for repairing the dry water bodies in Rajasthan. It also included the Old Pushkar Lake. All those modern construction of steps at the Old Pushkar Lake ghat and temples must be the result of that movement. But, why so many steps were constructed in a dry Lake. Is it going to be filled and hold water during rainy season? I did not get any answer to that question there. With a sad heart, I proceeded to the second leg of our journey. 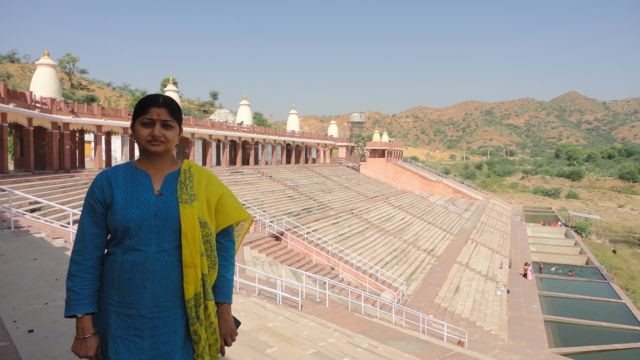 From old Pushkar Lake, a road goes to Jaipur. The “Jaipur Road”, as it was called, was beautifully laid on the base of a range of Aravalli hills. After travelling for about 4 kilometers on that road, we found the road condition to be very pathetic. So, we did not go any further on the Jaipur Road. Instead we returned to the main Pushkar-Ajmer road and crossed the Pushkar Ghati. It was a small valley of few turns. At one point, the hill has been cut to build the road. It was also full of Indian Common Black Faced Langurs, called ‘Hanuman Money”. I stopped the car to take a picture of one such monkey who was comfortably sitting on a rock. I was in for a pleasant surprise when the monkey turned his face towards us when his picture was clicked. 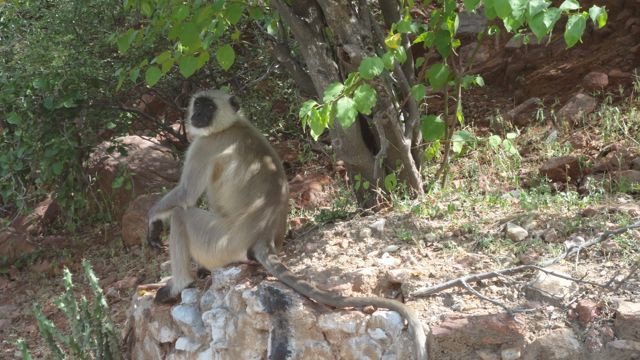 That second leg of the Pushkar-Bhangarh road journey was on the Ajmer-Pushkar Expressway for about 130 Kilometers. When I was driving non-stop during the return journey on the Ajmer-Jaipur expressway, the monotony started creeping in. The monotony of driving is a common enemy of all highway drivers. I have observed that the best way to fight the drowsiness is to munch “something” in a very small quantity. For me, that something could be like potato flakes, biscuits, idli etc. The glucose/sugar intake, if not in the regulated quantity, causes further drowsiness. During the journey, I had stopped somewhere near Kishangarh to take the picture of a mobile pollution control van which could provide instant pollution control certificate to diesel vehicles on the highway itself.

Approximately 10 kilometers before the Jaipur City, we had to take a turn towards the NH 11 C through Gopalpura Bypass. The journey from Pushkar to Gopalpura Bypass was so far good and pleasant. But, I was desperate to have a cup of tea. Suddenly, I saw a tea-shop, where tea was being prepared on the log-wood-stove. An old lady owner of the shop was preparing tea. I could not resist myself and stopped the car to have a cup of tea prepared on the flames of log-wood. I felt as if I were in rural Rajasthan. Sipping that tea from a disposable cup was a different experience altogether. Such tea-shops are a rare luxury these days. But, while standing there, I was also surprised to see the attire of that lady-owner of the eta shop. She was wearing the thick silver bangles, silver necklace and the silver nose-ring. Either she must be quite rich in her community or wearing such ornaments by a married lady must be a tradition here. 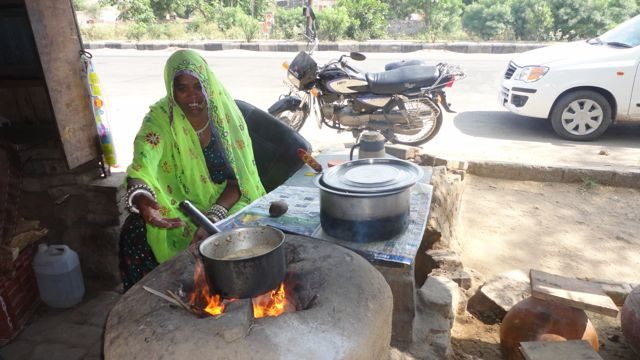 The tea had the desired effect on me. With the renewed energy, we came to the Toll plaza of the Jaipur-Agra Expressway. One of the Aravalli hills had been cut for makingthe way through a tunnel. Being a Sunday afternoon there was no rush there. My wife, however, pointed out that it was the same tunnel which was depicted as the most-accident prone area in the Amir Khan’s “SatyamevJayte” programme on the road safety. Anyway, we crossed that tunnel without any difficulty and proceeded ahead and continued to our third leg of the journey. 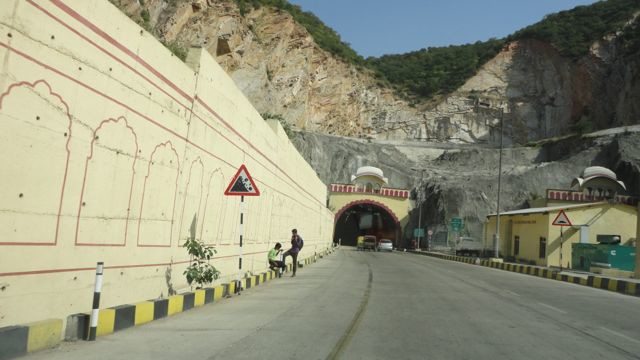 The third leg was on the national highway 11 C that connects Jaipur in Rajasthan to Agra in Uttar Pradesh. The Jaipur-Agra expressway is a treat. The rubber gives a very good sound and the car a neat tune. The passengers can sit back and relax. There will be no jerks for a long time. However, in some parts of Uttar Pradesh, people travelling on the bumper of any vehicle seem to be a socially accepted phenomenon. I was thinking about those four boys who we saw travelling standing on the rear bumper. What if one of them passes an examination and becomes a government servant or a teacher!How will his thought process change? That thought and the future possibilities were really amusing. But presently, all those boys were oblivious to any such possibilities and were enjoying their travelling on the Tata magic. We also proceeded ahead. 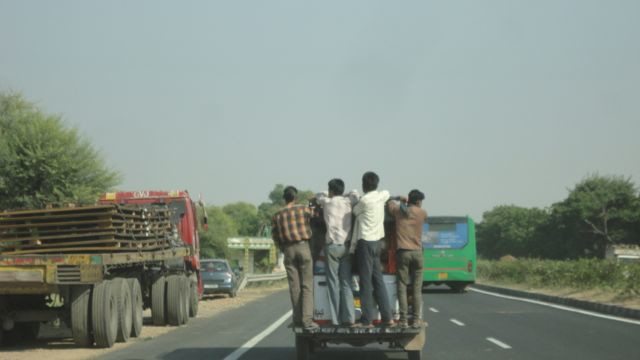 Travelling on the bumper

Very soon the settlement of Dausa came to our view. Dausa is stated to be a very ancient village. Bhandarej, Bhangarh and Abhaneri, three historical sites, can be visited from that place. But, we were only going to “Bhangarh” and frantically looking for any signboard for Bhangarh. On the expressway, a flyover was built over the Dausa settlement. Not knowing the route, we were about to take that flyover after crossing the main settlement of Dausa village, then a very small signboard was seen. We saw it just in time and changed the route. Instead of taking the flyover, we were then going to the left turn beneath that flyover. 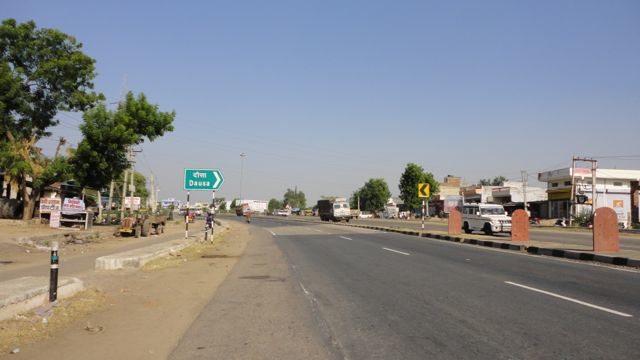 After turning left off the Jaipur-Agra Expressway, we started the fourth leg of our journey. The road suddenly became full of potholes and difficult to drive. But it also was going throughmany villages in rural Rajasthan, which gave us plenty of fresh air. Sheer openness of the countryside filled our hearts with joy. At some point, a lush green field was visible and at other point ploughed fields attracted us. In one of the villages, the natural sight of a group of women in their colourful attire attending to some ritual came into our view. Those bright and vivid colours will always remain one of the fond memories of that drive. 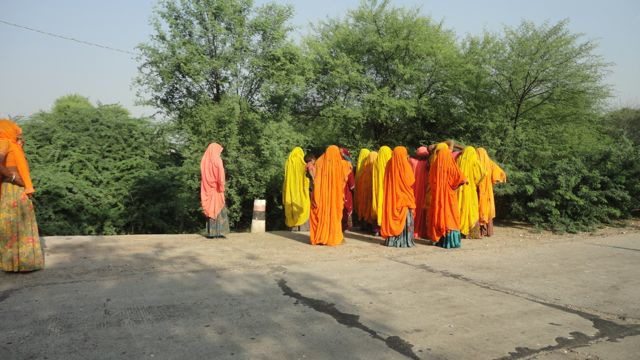 A ritual in a Rajasthani village

However, for next 15 kilometers there was no sign for ‘Bhangarh”. It was little worrisome as visitors were generally advised not to enter the Bhangarh after sunset and for us theevening was gradually drawing close. Then, we came to a village where a stone erected by Archeological Survey of India was showing another 10 kilometers. That was going to our last stretch of the total distance to reach ‘Bhangarh”. But what a road that was! At no time throughout the journey on this road, I could drive at a speed of more than 30 kilometers per hour. At one point, I attempted to enquire from an old village elder about the route to Bhangarh. But he pleaded ignorance as if the said place did not exist. 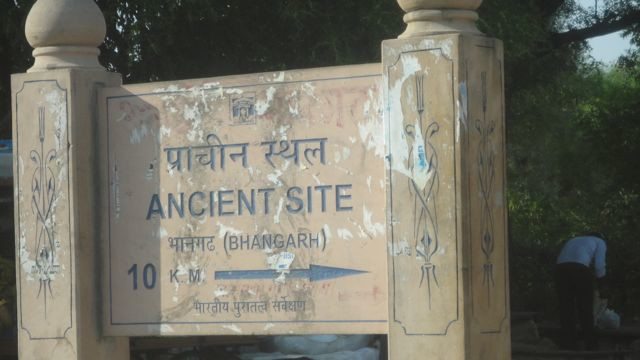 The signboard for Bhangarh

Finally, we arrived at an unknown village where a very narrow street was going towards the final kilometer to the destination. A faded signboard was also erected there. Immediately, we entered through that street and made it to ‘Bhangarh”, the most haunted place in Asia with the sun still shining at a distance.

On the road, from Old Pushkar to Bhangarh, Rajasthan was last modified: January 10th, 2022 by Uday Baxi