I was all stressed and fed up from the daily work routine and it was almost 3 months since i last went to the Himalayas. It was the 1st weekend of December and I was carving to go to hills again. So, Adhiraaj and i decided to go someplace in Uttrakhand on either Christmas or New Year Weekend. I logged on to the GMVNL Website and went to the page where all the locations of the GMVNL guest houses in Uttrakhand were listed and started browsing from the first location with the criteria that we have only 48 hours i.e. a weekend on our disposal to go, visit and come back to Noida as their was no leave left on our disposal.  After about an hour or so we saw Khirsu, i googled it and it was decided that we shall welcome the 1st  day of  2011 in Khirsu. 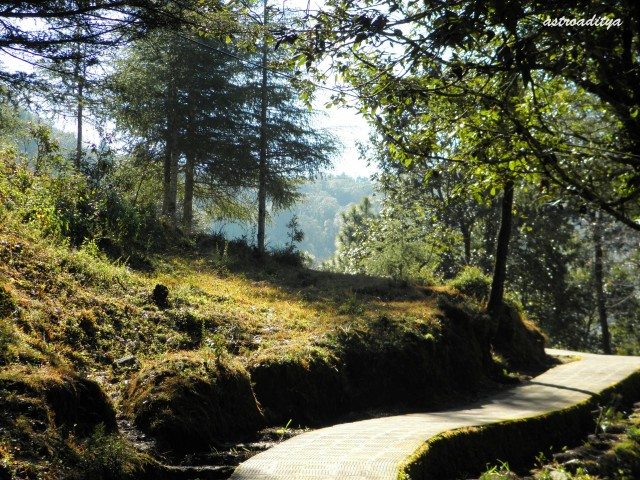 Number of days were decreasing and so was the temperature. I was following the weather forecast on daily basis. And finally our 25 days wait came to an end. It was 31st, last day of the calender year. I was in the office and nothing was final. Due to western disturbances it had been raining continuously in Uttrakhand and to be specific in Pauri district. The imd data was showing cloud cover and rainfall on 31st and 1st and clear weather from 2nd onwards. 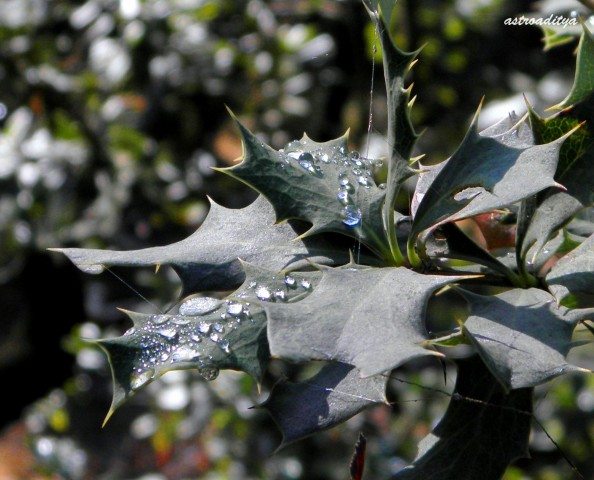 The big round clock on the wall in my office was showing 5.00 pm on 31st Dec 2010 and i was all done with my work, took permission from my manager to leave half an hour early. Within 10 mins i reached home and woke up Adhiraaj. Yes, waking up Adhiraaj is the 1st thing that i always do before we can go to a place. I told him about the current situation in Pauri District.  Celebrating New Year in Noida was the last thing both of us wanted to do and by 7.00 pm we finished packing and were on our way to Kashmere Gate I.S.B.T. In order to avoid the metro rush we decided to go by an auto and after 20 kms and 45 mins we reached Kashmere Gate. We rushed towards the Uttrakhand counter and were all set to leave by 9.00 pm bus to Pauri. We had an hour in between so, we went to the Mcdonalds nearby and satisfied our hunger. Soon we were out waiting for the bus which never came. We got the information that the bus broke down and their will be a delay. So, we decided to take bus till Kotdwar which was en route Pauri and was 210 km from Delhi. 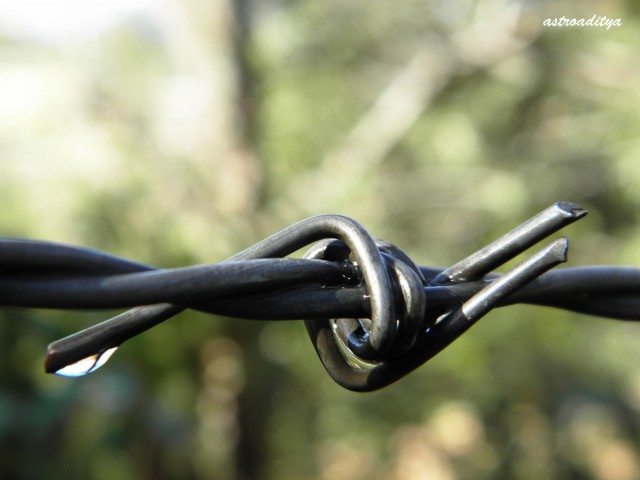 The time was running fast and around 10.00 pm and we hopped on to a moving UPSRTC Bus to Kotdwar and slowly the driver started navigating the bus through the busy roads of Delhi. The bus was half empty probably because of new year’s eve. As usual we got the seats at the back and my mind time traveled to the college days. The class, the back bench, the conductor calling the passengers just like our teacher who used to call students standing outside the classroom. The condition of the bus was bad and so the ride bumpy. It was 11.58 pm, another 2 mins were left to the Midnight and to the new year and i got a call from one of my best buddy all drunk wishing me Happy New Year. And their i was sitting in the bus, traveling but i was happy that i would be spending the New Year in the lap of Nature. The date said 1/1/11 marking the start of a new calendar year and to a new decade.

It was 3.30 am and we reached Kotdwar. As soon as we got down from the bus, we heard 4-5  taxi drivers shouting at the top of  their voices. We moved towards one of them and booked two seats in his sumo and were assured by him that he would start by 4.00 – 4.15 a.m. In the mean time we went to a shop nearby and had some tea. After waiting for another half an hour, as the driver was busy loading fresh copies of newspaper under the seats and looking for more passengers, we started moving towards Pauri. As soon as we left Pauri, i could see more and more stars in the sky, i was all exited as the sky was clear and was hoping to spot Milky Way from Khirsu. But soon the excitement was all gone because of the fog. It was near zero visibility. The driver was maneuvering through the snaky roads slowly and my eyes were all open, glued to the white line on the road. Fog disappearing and reappearing was the order of that night. It was 6.45 am, slowly the darkness was giving to the light and i could see the Himalayas emerging and the clouds hovering below them, i desperately wanted to click some pictures but my camera was lying in my bag at the back of sumo. The condition of the road was bad because of the rains and around 8.00 am we reached Pauri.

“Note – Their is no direct transportation available to Khirsu from either New Delhi or Kotdwar. If using public transport, in order to reach Khirsu, one has to go till Pauri and from there taxis are available till Khirsu which is 18 km away.” 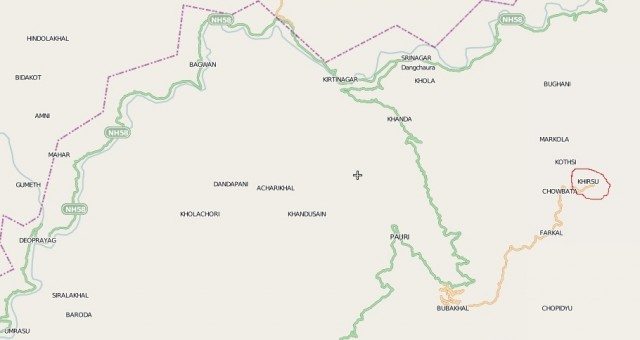 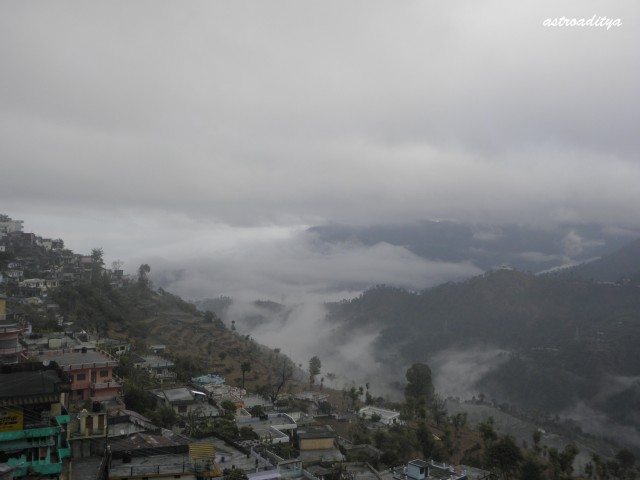 Pauri lies in the Pauri Garhwal District of Uttrakhand at an elevation of 4524 feet and is 101 km away from Kotdwar. The first sight was disappointing, it was all cloudy with no signs of improving and it was cold. My only jacket was not proving to be enough and i was shivering. We went to a shop nearby and had some tea and samosa. The shopkeeper told us that it snowed yesterday in Khirsu but after that it rained so their will be very little or no snow left. Only the word snow caught our attention and we were eager to cover the last 18 km asap. The taxi driver was sitting in the same shop, sipping a hot cup of tea and told us that he’ll leave to Khirsu around 9.00 a.m. Fair enough we waited for him to finish repairing the taxi and calling more passengers. Soon we were on the track and sunlight was making its way through dense fog. 45 mins later we reached Khirsu and it was all bright and sunny but their were no traces of snow. 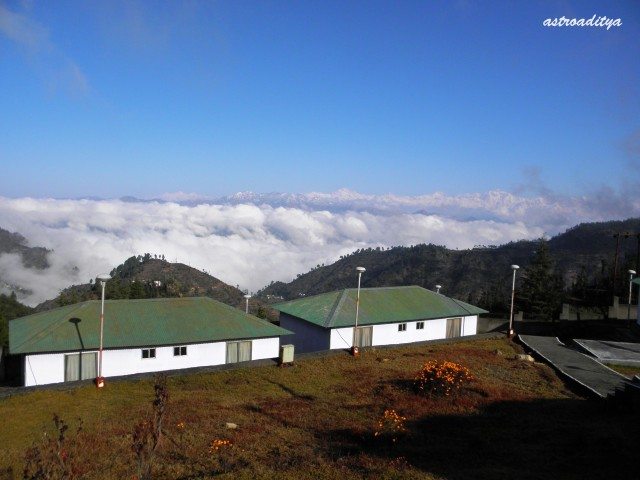 Khirsu is a small hamlet located in Pauri Garhwal District and is 5577 ft above the sea level. The place is completely isolated away from the hustle-bustle of city and is situated around the forests of Oak and Deodar trees. We started moving toward the only place that i knew, GMVN Khirsu. As we were approaching the guest house, i was treated to a view that i won’t forget in my entire life. An uninterrupted panoramic view of the snow capped peaks of the Himalayan Range with a white sheet of clouds that were hovering below. My whole body and soul was rejuvenated. I was relaxed and was happy. As if nature was enjoying, celebrating and welcoming the New Year. We went to the reception area and found that all the rooms were full. Oops! i had time to book the room online but i didn’t…..

So we moved out of the reception and stood outside for some more time admiring the beauty and clicking pictures. 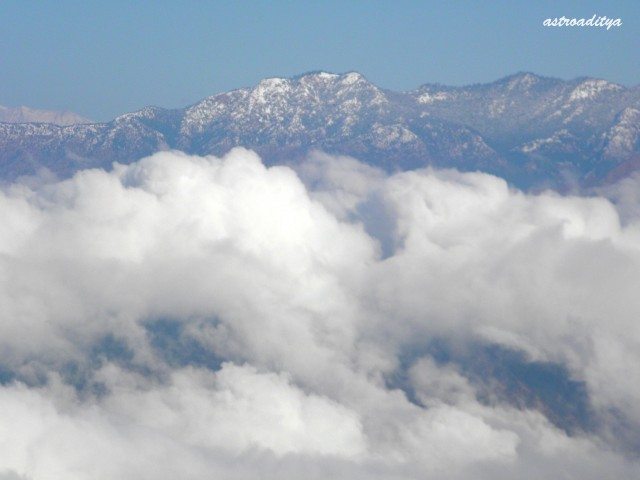 A Panoramic View of the Himalayas 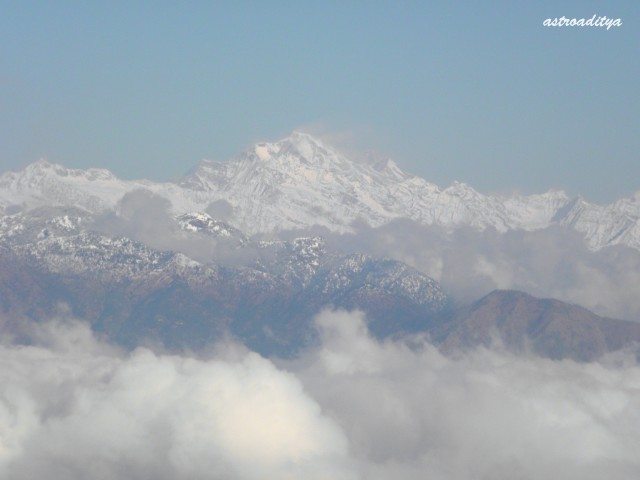 After getting enough pictures we moved out from GMVN gates and began looking for another guest house. We passed through the tiny village and some 200mts away from the village area we saw a board hanging that read Badri Vishal Tourist Lodge. The caretaker came out as he saw us walking towards the guest house and showed us the room. Their were two types of room, one with T.V and the other without T.V and a price difference of Rs. 200/-. We paid Rs. 600/- for the room without T.V, who wants to watch T.V when visiting a place like Khirsu and that was the only point i said to the caretaker and he just shrugged that off. The room was nice but the unusual thing was the fan in the room and this time i didn’t ask him why. 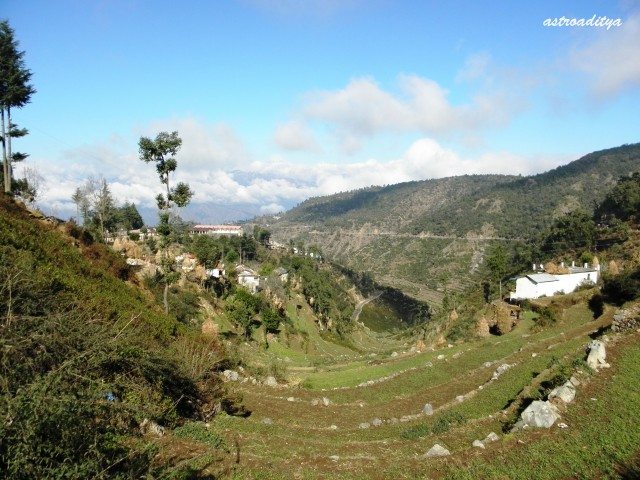 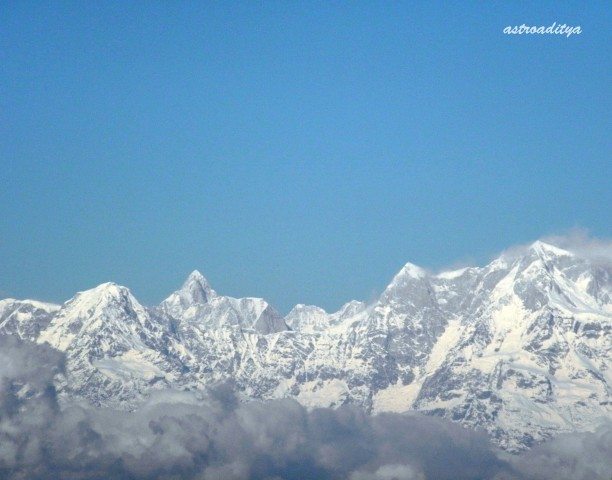 The clock was showing 11.30 am and we needed some rest. So we decided to take a nap and explore the surrounding area after 1.30 pm…. Contd…..

The fuel cost is about INR 100/- per litre which varies slightly depending on the country, location (ones nearer the airport are costlier than others), etc. Most of the petrol stations are self service types – you park the car, fill up the tank and then go to the counter to make the payment.

Now, some other issues about driving. Honking is uncivilised, so it’s best avoided, except in emergencies. Similarly, it is illegal to flash/ beam headlight either frontally or from behind, onto another car. German rule considers flashing of headlight on other vehicle a coercive act. Driving on the right lane, keeping the left ones free for overtaking, is followed as a rule. After overtaking, the car promptly shifts rightwards. Overtaking from the wrong side, irrespective of how many empty lanes are there, is a strict no-no.

Overtaking – there are defined portions on the road, where this act can be performed. For starters, the continuous yellow/ white line dividing a two-way road is not be crossed over randomly.