As you all know, San Francisco Bay Area is pretty much the Desi Capital of the West. With the technology industry relying increasingly on the smarts and sweat of Indian engineers, the flood of migrants and visitors from India continues.

One of the interesting phenomena out here is the out of town visitors that all of us get – and the typical places that we take them out to – to show them the sights and sounds of the bay area. While most of these are perennial favorites with any visitors, as usual Desis tend to be more conventional and congregate even more to the most popular of these places. 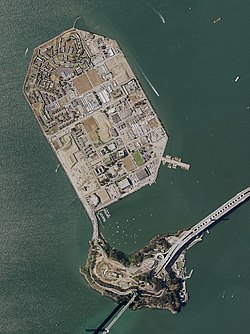 Today I’m gonna describe one such trip we made recently, on Sunday, December 30, 2007 when my Uncle, Aunt and Cousin were visiting us from Shanghai. My favorite route takes me from Fremont north on 880 then across the Bay Bridge to my first stop at Treasure Island. As many of you would know, the Bay Bridge connects the East Bay (Oakland) to San Francisco. The bridge consists of two spans with the Treasure Island in the middle. There isn’t much to see on Treasure Island itself, but the views of the San Francisco skyline from the island are spectacular. You can see the Golden Gate Bridge in the background, the infamous Alcatraz (remember “The Rock” starring Sean Connery) prison on an island in the middle of the bay, etc. A tip to budding photographers – since San Francisco is to the West of Treasure Island, the best time to take photographs is in the morning with the Sun behind you. In the afternoon, the glare of sunshine makes it difficult to get good pictures of the city skyline. But then, like my cousin – a serious arts student from Shanghai said – “what’s the point of taking perfect pictures? :-)” so the more creative types amongst you might just relish the challenge. 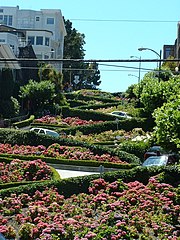 Once we were done with Treasure Island, we got back on the Bay Bridge and on to the city. The next stop was Crooked Street (or more correctly a section of the Lombard Street). This section of Lombard street features a straight and steep incline and then a snaking decline. You’ve probably seen these photographs in probably every travelogue on San Francisco. And even though we’ve been there so many times over the years, it still never fails to amaze me. My most memorable trip to Crooked Street though was my first one – I had just recently moved to the Bay area and I used to drive a stick-shift Ford Contour. Now, if you can imagine a 45 degree incline with bumper to bumper stop and go traffic, you can imagine how challenging it would be to handle that in a manual shift car – handling the accelerator, brake, clutch and hand brake simultaneously. This time though I was in my comfy Honda Odyssey – literally a home on wheels for us and its automatic drive train had no problems at all. 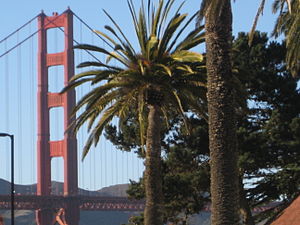 From Lombard, it was on to Golden Gate Bridge, however we decided to do a short detour stopping at Crissy Field. Crissy Field used to be an airfield in the 2nd World War. It’s a great beach with a close up view of Alcatraz and Golden Gate bridge. In summers this a great place for flying kites. Of course, in summers it’s also a great place for watching the great sea of humanity – in all its different colors, clothes (very little) and shapes. You see joggers, bikers, skaters, walkers, moms with strollers and homeless people with shopping carts. Now, the reason for our stop was not just the scenic beauty – but the fact that Crissy Field provides access to the nearest restrooms from Golden Gate where you don’t have to stand in a long queue outside – specially for Women’s restrooms. Trust me, if you have women in your group, make sure you take a nature break at Crissy Field before going on to Golden Gate. 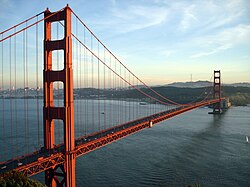 From Crissy Field, it’s a short 5 minute drive up the hill to Golden Gate Bridge. The parking at the bridge is always full on major weekends, but there is an overflow parking right around the corner. From there a short walk through the walls and tunnels of the old fort takes you to Golden Gate bridge. There are a couple of great photo spots on the way – you’ll see these pictures in everyone’s travelogues. Nevertheless, I have never been able to resist the temptation of clicking a few every time I go there.

This is part 1 of a 2 part series. In the next part I will complete the details on Golden Gate Bridge and conclude with Pier 39 and dinner at the world famous Hard Rock Cafe.

Pop quiz: Which movie starring Sean Connery was filmed in an area adjoining the Golden Gate bridge? Post your answer in comments here or wait for the second part for the answer.

About Karna Lake, this place is suitable for those who donot want to travel much from Delhi, loves peace and looking for a short break. My suggestion, this place is very good for 2 days and one night kind of itinerary and one will enjoy this place. Take a walk on the well paved path along the lake, it takes approx 30 minutes for one round, enjoy the beauty of the place. Sit near to lake , you will feel very good, this place gives lot of peace, do boating. I must state here that i have never experienced such a wonderful service, ambience, maintainence, food from a government tourist place, the staff is very polite, is ready to help to their level best, every thing on the food menu is availabe which we generally don’t see in hotels run by tourism department.

Food is little expensive but the service, taste and ambience of the restaurant is up to the mark. They also have a well packed bar besides restaurant in case somebody is interested and small gift shop.

We roamed around the lake in the evening, took our dinner and called it a day at 11 pm. Woke up at around 7 am in the morning , took some pics of Karna lake from the balcony, it was looking so awesome. Went for a walk around lake, came back had a break fast of tandoori parantha and puri bhaji.