Last summer (May 2010) it was the call of the wild for us, and we decided to visit the Periyar Tiger Reserve in the Cardamom Hills of Kerala. 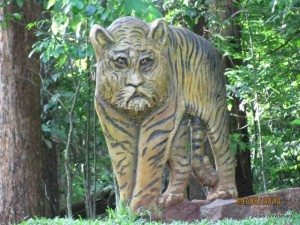 The Periyar Tiger welcomes you.

This sanctuary is located on the Kerala-Tamil Nadu border very close to the town of Kumily on the Kerala side of the border. This is the only sanctuary in India where you can have the unique experience of viewing wildlife at close quarters from the safety of a boat on the lake. The entrance gate of the Tiger Reserve is near the village of Thekkady, which is 4 km from Kumily. Kumily is also a good base for short trips into the Cardamom Hills, and one can visit some tea factories, spice plantations, and many nearby viewpoints and waterfalls.

We took the Kanniyakumari Express (aka Jayanti Janata) from Pune and alighted after a 2 night journey at Kottayam early on the morning of 22nd May 2010. We relaxed and explored the backwaters near Kumarakom for 3 days before continuing our journey to Kumily. Kumily is 115 km from Kottayam, and we decided to do the trip by private taxi, so that we could stop and enjoy the scenery on the way. 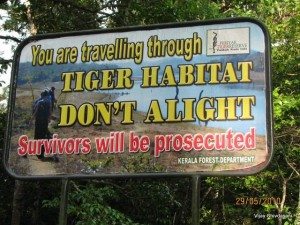 Enter at your own risk!

At Kumily we stayed at the ‘Tusker Trails’ resort. The ‘machan’ style rooms at this resort are constructed on stilts, with thatched roofs, and look somewhat like the local tribal dwellings. These dwellings nestle within a thickly wooded plantation of coffee, cardamom, pepper as well as teak and fruit trees. 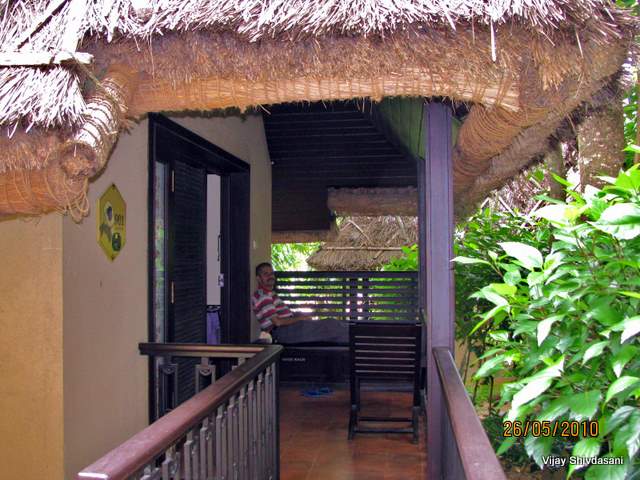 After evening tea we went walking nearby and found the office of the Eco-Tourism Centre at Ambadi junction. This centre is run by the Kerala Forest Department and they employ the local Manna tribal people, who may have been former poachers, as guides and wildlife wardens. They conduct various graded nature programs and walking tours, ranging from short 3 hour rambles to 3 day long expeditions, and the local tribals act as guides for forest walks and bullock cart rides. 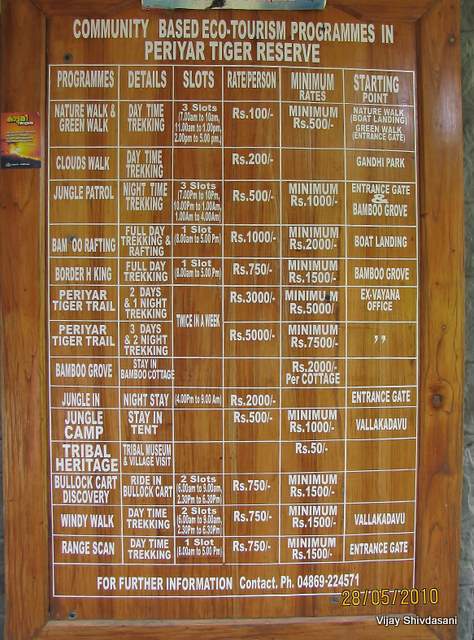 I decided to go for the full day Bamboo Rafting trip along with my daughter, Komal. My wife opted out and preferred to go to Kumily to shop for coffee and spices. We had to book the trip at least a day in advance, because they have to make arrangements for breakfast, lunch and tea for each of the members joining the trip. The cost of the trip was Rs.1000 per person. They have to have a minimum of 2 members and a maximum of 10 joining the trip. 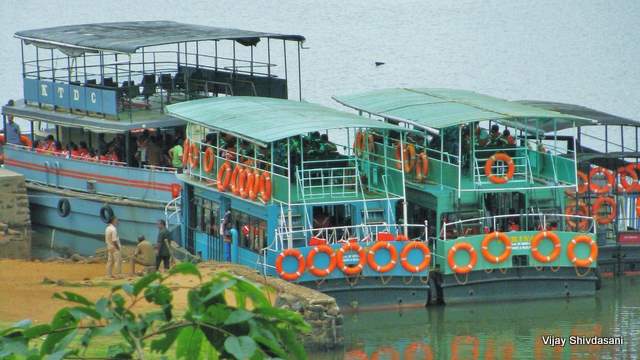 Next morning I got up at 6 am and awoke Komal, who immediately jumped out of bed. We were both excited at the prospect of actually walking and rafting in the jungle. We walked briskly to the sanctuary gates, a distance of about 2 km, enjoying the cool morning breeze, where we had to pay an entry fee of Rs.25 per head. We found out that the boat landing was another 3.5 km inside, so we quickly jumped into a rickshaw for the rest of the journey to the starting point. 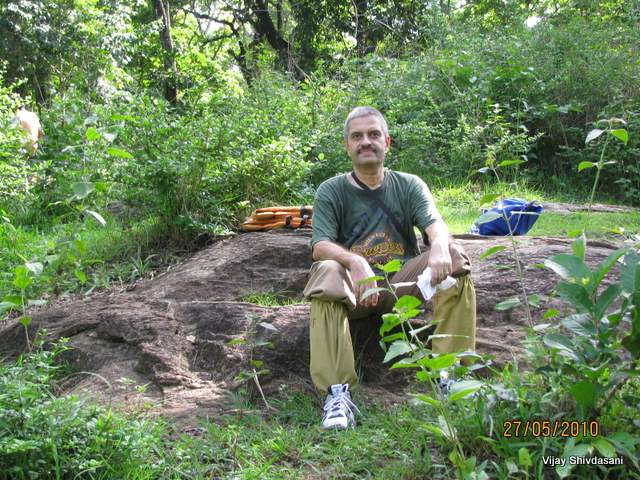 Ready for the trek (leech socks and all).

We reached the boat landing 10 minutes before the scheduled time of 8 am to see a huge crowd of about a hundred people milling about the ticket booking window for the motorised boat trips on the Periyar Lake. The double decker motorised boats were the most popular means of touring this sanctuary, and the upper deck seats were sold at a premium to the lower deck seats. However a few months back there had been a serious tragedy because some tourists got so excited on the upper deck on seeing the wildlife, that they unbalanced the boat and caused it to capsize in the lake. Some tourists had drowned and the service had been suspended for some time. I believe now they were back in operation with stricter safety standards. 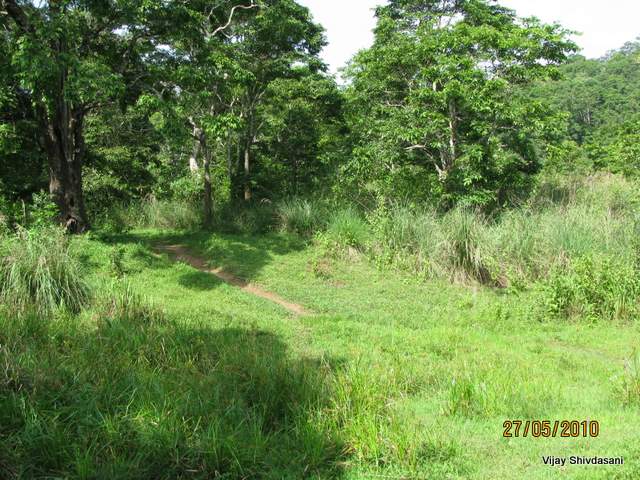 The forests of the Periyar sanctuary.

We were asked to wait on the terrace adjoining the booking window, and we were given special thick canvas socks to put on. This was to protect us against the blood sucking leeches. We were given a litre of bottled water each to carry with us, and we were made to sign an undertaking that we were in reasonably good health to take on the arduous trek and were doing so at our own risk. 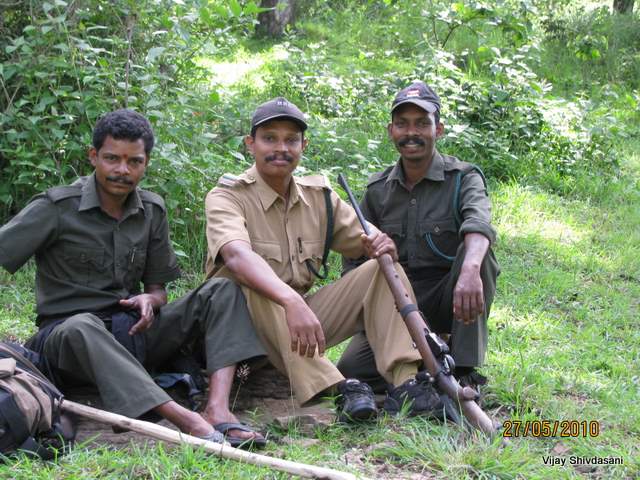 Our guides and guards.

We were joined by a group of 6 students from Chennai, and a lone foreign tourist from Holland. So there were 9 of us and 4 guards in our group, but we were waiting for the most important member to arrive – – the gunman! Finally we set off at 8.30 am, the 14 of us, in a single file, with Subhash the gunman, carrying his rifle on his shoulder, leading us. We were all uniformed in leech socks and rucksacks, and had our cameras in hand. The guards, who were also our guides, brought up the rear, carrying our refreshments and the rafting oars on their shoulders. The impatient double decker boat passengers stared enviously at us, as we marched down towards the Periyar Lake. 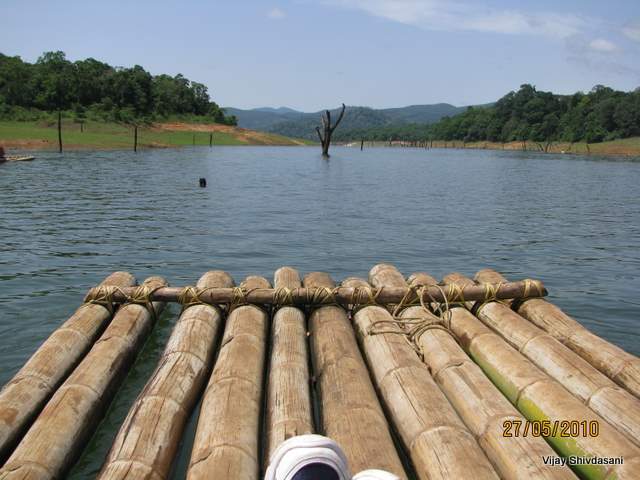 After walking half a km we had to cross a stream, on a moving bamboo raft bridge pulled across by the guards, and almost got our shoes wet in the process. Then the trek started in dead earnest, and soon we were walking through some shoulder height elephant grass. The guides showed us some exotic butterflies flitting about in the grass. At one place they pointed out to some Niligiri langurs peering down at us from the high trees. That really made us feel that now we were being stalked and hunted rather than the other way around. 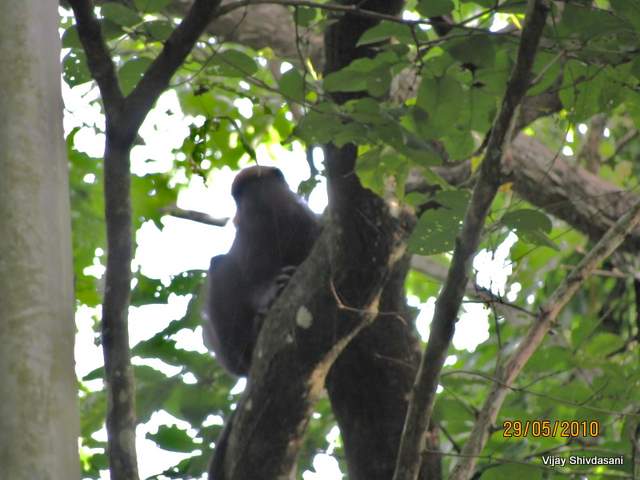 After another hour of walking we reached a clearing in the forest and were allowed to sit down and rest on the grass and rocks, and listen to the sounds of nature surrounding us. We had some refreshments and lazed for about 15 minutes and chatted with Subhash and the guards. One of the students asked Subhash if his gun really worked. Luckily Subhash did not take it up as a challenge, and just sniggered at the young man. 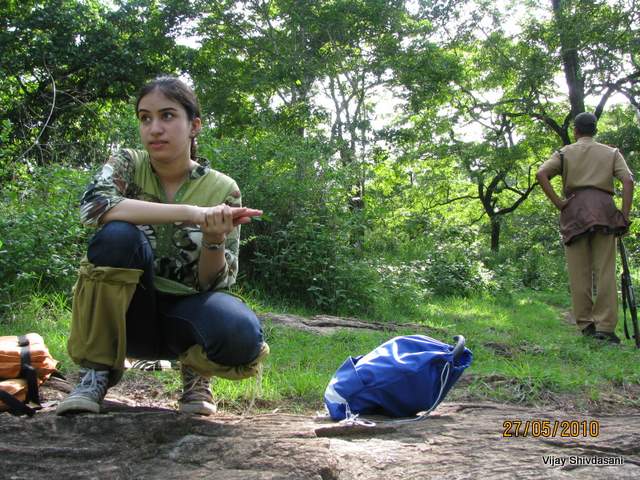 On guard while we take a break.

Breakfast consisted of jam sandwiches and some Good-day biscuits. One of the guards prepared tea by lighting a small fire in a clearing in the forest. 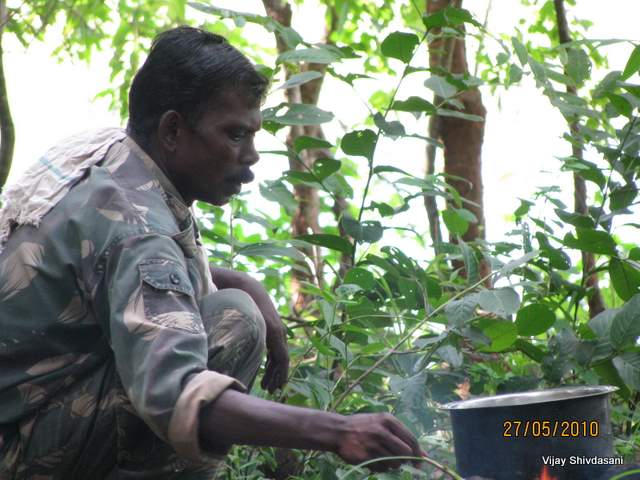 We continued our trek through the elephant grass. Now and then the guides would point out some exotic birds to us, and all of us would stop momentarily to peer up into the trees. We saw egret, stork, pied kingfisher, black eagle and jungle mynas. As we trudged up a small hillock and reached the top suddenly we saw a small herd of elephant on the opposite bank of the lake. There were four of them, and included a baby elephant. We could hear them trumpeting in the distance. They took their morning baths in the lake and then disappeared into the jungle. We saw some wild boar too.

Elephants emerging from their morning bath! 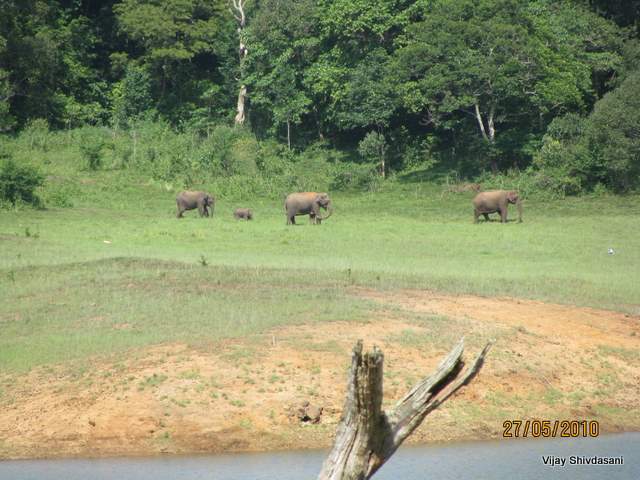 Elephant family (with a baby) at Periyar. 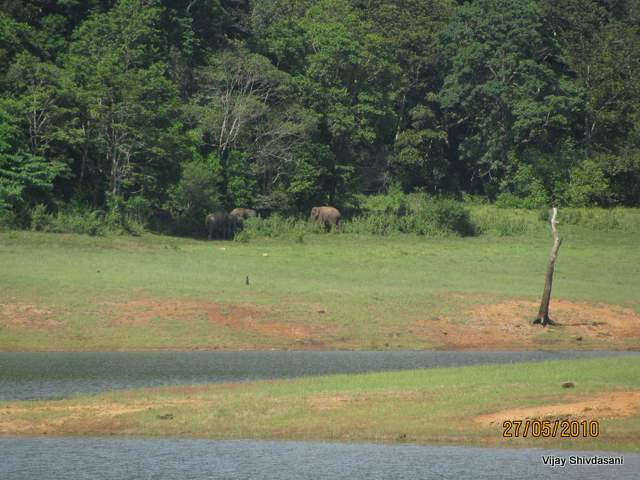 Wild elephant family with a baby. 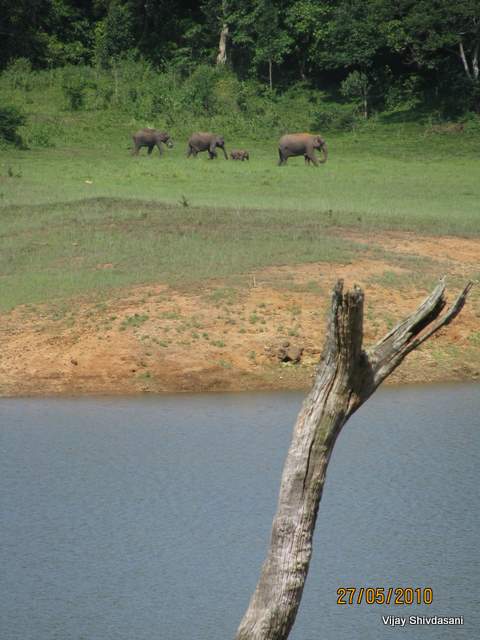 After about an hour of walking we reached the point on the lake where the bamboo rafts were moored. There were two rafts which could seat about 5 or 6 passengers and 2 oarsmen each. The rafts were made of ten or eleven stout bamboo poles lashed together, had four benches each, also made of smaller pieces of bamboo, placed one behind the other. 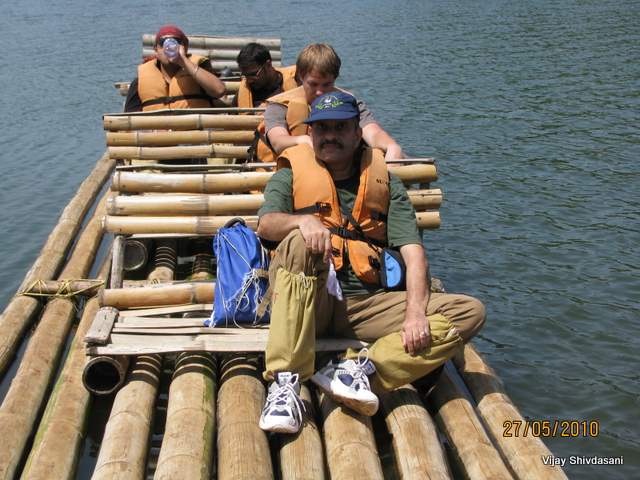 The rafts took us deep into the game reserve and we could get very close to the banks to observe the wildlife. However at this time we could only see some wild boar feeding in the bushes, but not much else. In the lake itself there were many tree stumps jutting out of the water, and we could see the black cormorant birds sitting on the branches and drying their wings. 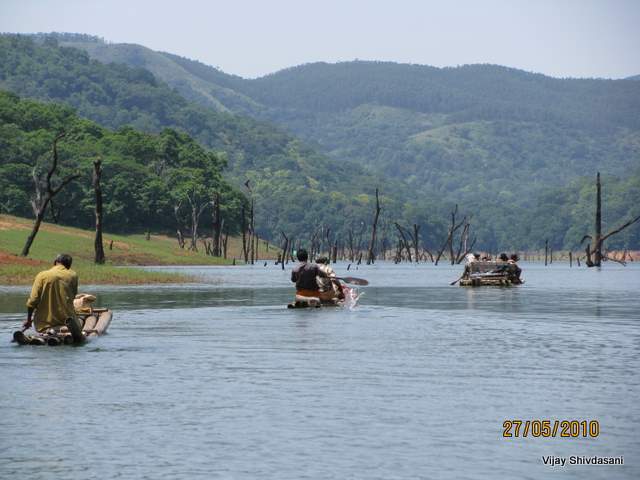 Dead tree stumps in the lake.

After about an hour and a half of paddling along the lake we disembarked and were taken for another walk into the dense forest. This time we saw some bison (gaur) in the distance. They were about 30 metres away from us, but as soon as they became aware of our presence, they melted into the bushes and were gone. They are known to be very shy creatures and avoid human contact.

We returned to the clearing on the bank of the lake where we had disembarked and settled down on some plastic sheets for our lunch. We were served up vegetable biryani, along with curd raita and pickle. Since all of us were famished, we relished this simple meal, which the guards had carried along for us. After the meal we relaxed in the clearing for another half an hour, and then boarded our rafts again for the long journey back. 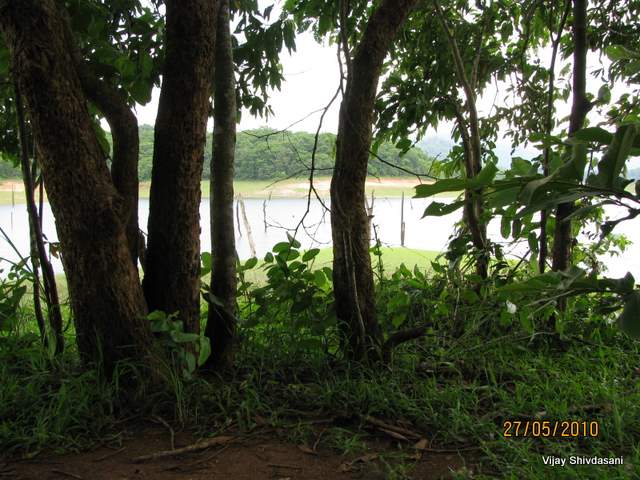 A shady spot for lunch and a nap.

Relaxing and cooling off after a long trek.

We reached our initial boarding point by about 4 pm, and then trudged non-stop for another 1 hour, till we were back at the boat landing by 5 pm. We thanked Subhash and the guides and got the same morning rickshaw to take us back to Ambadi Junction. We had our dinner at Hotel Ambadi, followed by ice-creams from a corner shop at the junction, and then crashed our aching bodies into our soft beds for a good nights sleep.