Coffee, hills, foliage and beaches were themes of my journey driving a car through Karnataka in August 2007 along with couple of friends. Though this is an old travel but wanted to share with you all as one of my best trips till date.

One of my friends Nitin was going to visit Hyderabad in the month of August and we were planning to go around a bit. With one more common friend in Hyderabad, we were thinking of making it the style of “Dil Chahta Hai” with a week off somewhere driving in a “merc of middle class” Hyundai Santro. Unfortunately, the other friend could not accompany us. The planning was left to me being the host, so I was wondering where could we go in this rainy season around Hyderabad? There was not much to keep us occupied for 3-4 days. I called up one of my better traveled friends who gave me idea about going to Chikmaglur near Bangalore. I could not research much about the place and agreed without thinking much. So, we tentatively decided to go to Bangalore and then onto Chikmaglur and also visit Hoysalan temples of Belur, Halebid and Jain pilgrimage of Shravanbelgola and come back the same way. But that was not be, read on!

The day came when we had to leave and it turned out to be a Monday morning. Within the city limits it was amusing. When everyone was rushing to the office on the road, we were getting away from it for a holiday. Hyderabad to Banaglore is around 550 km something which I had done before but in night some 3 months back. On the road, I was trying to figure out various pit stops we took in my previous trip. I identified the place we had tea, had dinner and even where we refuelled which drove Nitin nuts and was asking whether a plaque should be installed here to commemorate my visit :) Our first stop was on a bridge over swollen Krishna river with muddy water just before Kurnool. 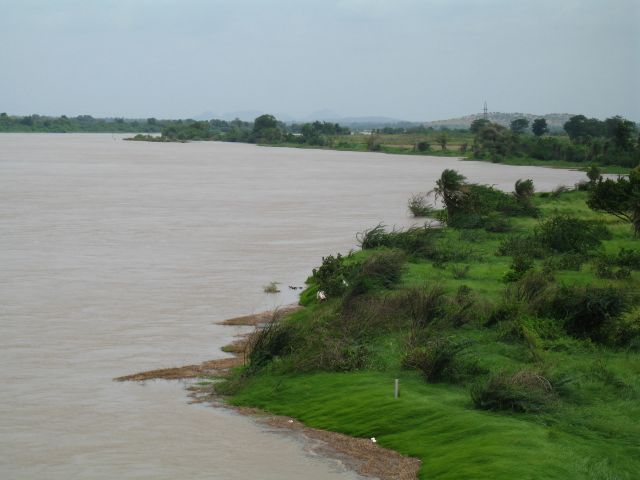 There was an island a little distance away in between the river with a fort on top!! Nitin considers himself as someone whom Schumacher looks upto, he didn’t disappoint and touched 130 kmph readily on a dual lane road without divider and moderate incoming traffic. We stopped again close to a level crossing skirting a sunflower field which was also an opportunity for me to ogle at some trains on this route.

It was unguarded and we took a walk through that sunflower field. Even with cloudy weather, sunflowers were in bloom. A large portion of landscape looked yellow reminding me of mustard fields in North. There were few fruit sellers near the crossing whom we provided a good business. After that we rushed towards Bangalore with few stops for lunch, tea and snaps. The landscape throughout the drive was undulating, boulder-strewn or sometimes with hills made of boulders. That is the characteristic of this region of Deccan plateau, arid and boulders.

However, because of monsoon, the landscape wore a green look. The drive to Nitin’s brother’s house in evening Bangalore traffic was expectedly gruesome.

Next day we started a bit lazily for Chikmaglur in the morning and had to grind through Bangalore traffic. Once we turned towards Hassan from Nelmangala, the road and landscape improved drastically and we were cruising towards Hassan with occassional photo opporunity. There were frequent signs announcing proximity to Belur, Halebid but we decided to visit them while coming back. We occasionally saw Bangalore – Hassan railway line which took long time to convert from Meter gauge and runs upto Mangalore, one of the most scenic ones in India. Hassan was a non-descript town with messed up roads. We had a decent lunch or “meals” as it is called here. Once we hit the road to Chikmaglur, the roads improved again. The road was one of the better tarmac I have seen and I am sure many of the ads with speeding cars might have been filmed on this road.

We curved through fields, hills and water bodies. It was a beautiful day. Probably the moisture got the extra color into sky, trees and the soil. 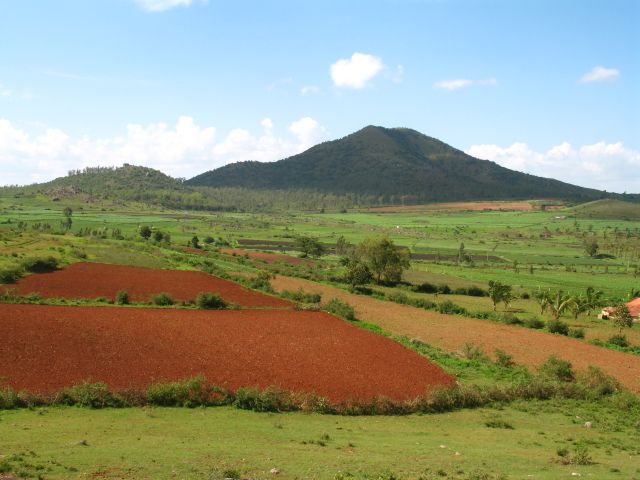 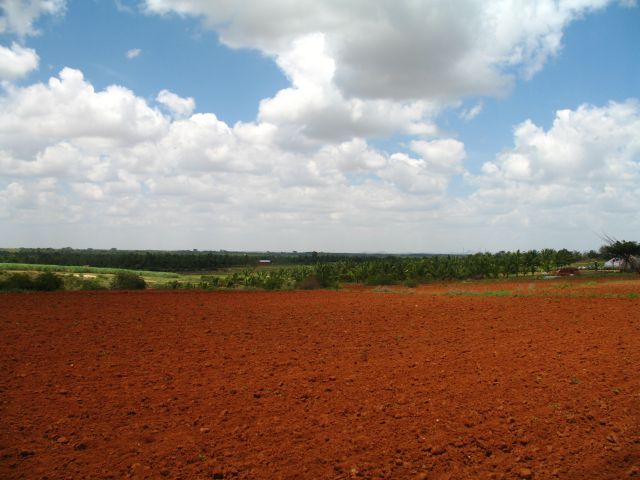 We stopped at one unguarded field full of marigold flowers. The flowers were in full bloom and planted in rows. We walked among them, fondled them and clicked lot of snaps. 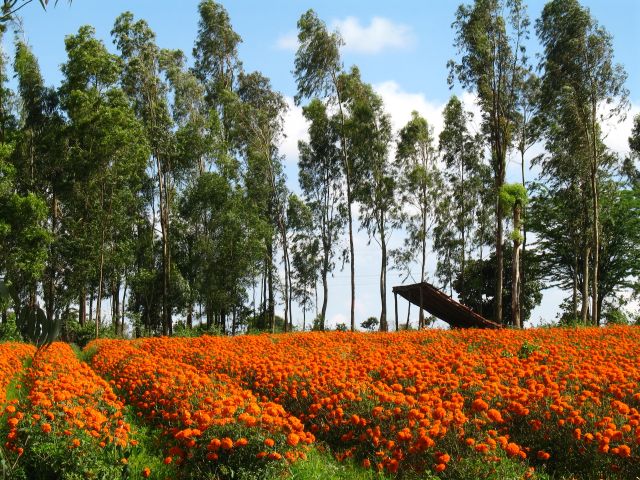 Some time later we encountered a dam. “Yagachi” is a small dam on some river whose name I don’t remember on the way and worth visiting. The sluice gates were narrowly open and water was pouring out in nice pattern. The lake behind was huge and full to the brim.

We were expecting Chikmaglur to be hilly but it turned out to be plain. Nevertheless, the hill range of Baba Budangiri and western ghats were not very far. We stayed in a hotel in the town called “Planter’s Court”. One could stay at any of the coffee estates but then your agenda should be only to enjoy the estate and not venture out much. Moreover, these estates are a little distance away from the town, so you have to know where to go. Once we checked into hotel, we asked receptionist whether she could suggest an itinerary for attractions nearby. Once we had that, we head off to a Cafe Coffee Day outlet nearby. We were surprised to find one in such a small town but the real reason was displayed inside the Cafe. Chikmaglur is the HQ of CCD’s parent company Amalgamated Bean Company Limited and they procure their coffee from region around Chikmaglur so they have opened this outlet as an honorary outlet.

The parent company called “ABC” for convenience was on the oppposite side of the road. By this time being charged with surroundings, the idea of going deep into Karnataka was hatched and we called up couple of friends with internet connection to help us with distances to various destinations. Initially we were thinking of going to Mangalore but friend suggested instead go to Udupi via interior roads to avoid heary refinery tanker traffic. We decided upon going to Udupi from Chikmaglur, from there to Karwar just south of Goa and then return to Hyderabad via Hubli.

Puducherry(Pondicherry) is a small heaven just south of Chennai. Puducherry means “New Village” which it really stood out for us, a bunch of frustated…