In the month of September, 2011 I got the chance to visit city of Hyderabad in the state of Andhra Pradesh in India. This is a small effort from me to share my experience about city in general, some of famous places, food, Pearls etc.

It all started with an early morning (read too early!!!!!!) journey from my home to New Delhi domestic airport where I reached so quickly (thanks to no traffic time) that I had to wait for 1 hour before check-in began. After couple of minutes post boarding I felt really sleepy that I was imagining magazines like Outlook Money and Economist which were there in my front seat pocket as some course books.

During mid hour when I felt restless (read hungry) flight attendants bumped in with host of options out of which I chose to eat Paranthas (non-hot) which served their purpose well in the flight around 3000 ft above. Also was given the magazine (only offered to CORPORATE customers) which had study/results of ‘Great Places to work in India’ 2011 survey. I was still hooked up into my Economist and Outlook Money when announcement of landing the flight forced me to tighten my seat belt.

Couple of minutes and I was out of Hyderabad airport when I saw my name on one of placards in hand of one taxi driver. At the same one moment I received the SMS about my taxi and his details and thought what a coincidence. Well here is from where my 2 day short haul trip to so called ‘Cyberabad’ started. Amazing was experience when I zoomed out of check post and drove on 11.5 km long (read longest in India I think) fly over, passed two small towns, saw fish shaped restaurant. Hyderabad is surrounded by mountains and landscape of this hi-tech city can be seen from far away while driving. Boast of population of 8.5 million people and approximate 80 km2 in area it is one of those great cities citing the boom of economic development which IT outsourcing has brought to our nation.

After around 1 hour we reached our hotel Taj Deccan situated in Banjara hills area. With some initial formalities I checked in my room. For rest of the day I was busy in the conference for which I went there.

During evening I decided to take a glimpse of city starting with a visit to Hussain Sagar which has a uniqueness that its shape is of necklace. Around the periphery were eating outlets, swings etc. A boat ride from one end to other will also show you the Buddha status carved out of single stone. I chose to skip the same and sat from some quick refreshments and photo shoots. Here is one of the collages with the middle image showing the Buddha statue. 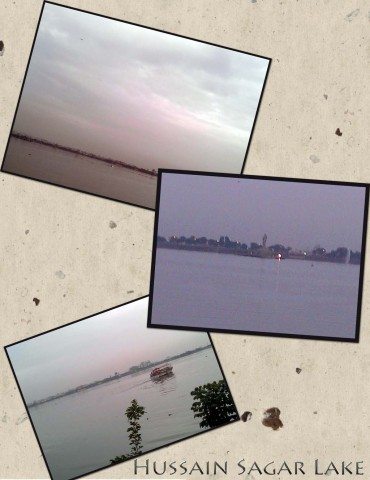 As sun decided to say good bye for day 1 trip and when whole of city was lit we zoomed into one of those govt. approved fixed price (read with discounts) shops to buy (read more see less buy) what this great city is famous since ancient times. Yes you guess right ‘Pearls’. For next one hour or so started the great Indian experience of shopping with pearls being checked on their quality, color, purity, price, liking (read by spouses), professionalism, shining etc. Don`t worry I did not return empty handed but actually bought those and was really happy when left the shop. 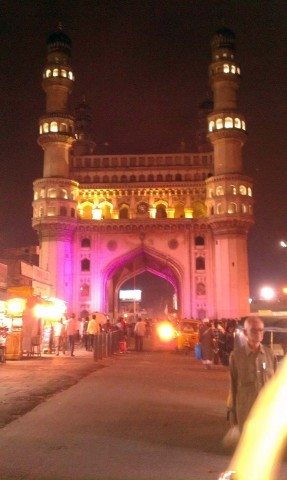 where I tried to shoot really hard with my HTC desire but the crowd, traffic and light from passing by vehicles did not allowed me to have a single nice perfect shot. Here is one of collages for you to feel you are there. 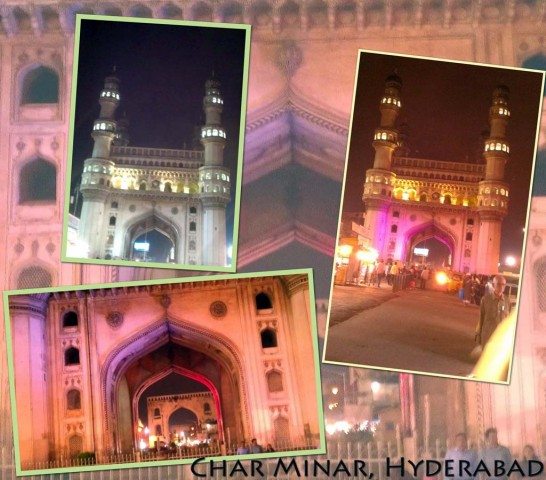 The sights of Hyderabad

By the time my shooting drive was over the thoughts of ‘Hyderabad Biryani’ swamped my minds when I headed for one of the vegetarian hotels. In the way was Karachi bakery famous for cookies etc and were shocked with the people queuing up in payment lane even at 9:00 PM in the night. I had a great ‘Biryani’ after which I only remember my taxi entering hotel gate.

Next day I had a great ‘Taj’ style breakfast and rest of the day was busy in conference after which I collected my luggage from clock room to depart to airport. As usual I was too early and check-in had lot of time so I decided to have pizza (wow I found Pizza Hut there) and did some shopping. Post midnight I was back to my place.

Although I missed on some of the famous sites like Fort and Nawab`s museum but I am sure these things would give me enough reasons to visit ‘The City of Nawabs’ some time sooner.

After reading lots of blogs on ghumakkar. finally i decided to go to amritsar this time by road…. so me and aman got our…