It was mid of February 2011 when all of a sudden me and my husband planned this trip to Shimla. Since he had to join his new job after 4-5 days and as my relatives living in Shimla had invited us many times so at that time, so we decided to leave the next day only that was Saturday.

The first thing that came in mind was the mode of travel for which we chose Himachal Roadways (HRTC) Volvo Bus direct from Delhi to Shimla. As we wanted to board the bus same day, so we could not do online bookings from their web portal and we had to go to HRTC office at Janpath, Connaught Place (CP), New Delhi. (Tip for Ghumakkars: Try to book Volvo tickets at least 24 hours prior to your journey else you would also have to go to their office to get tickets like us). The bus departure time was 8:30 pm on Saturday. It was my working day in the office and after struggling hard to manage for leaves on Monday and Tuesday, I left at 6:30 from office. We hurriedly reached the bus stop near their office in CP. (One more thing to take care of: Reach there before 10 min. as the bus gets departed at exact departure time and will not wait for you, if you are even 5 min. late). The bus also stops at Mandi House Delhi (at 8:40 pm) after its departure from CP to pick some passengers, so you can board from there also. There were only 20-25 passengers in that huge bus and most of the seats were vacant. And here goes the start of our impulsive journey.

The only thing that disappointed me about the bus was the movie that was being run on the DVD player. It was some Sunny Deol’s Movie which I could not bear for a single moment and slept soon. I was awaken when were stopped at some Dhaba near Karnal for dinner. After that bus only halted at Shimla at 5:00 am, Sunday. We reached our relatives house that is located at Ghoda Chowki, 4 kms before Shimla main bust stand. The house is located down along a hill slope and we had to go down almost 250 stairs to reach the house. After meeting and chatting with every one at home, we retired to bed to get some relax. 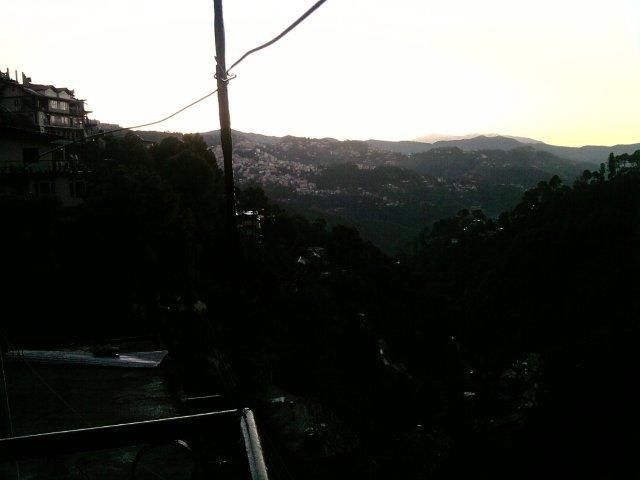 A Spectacular Dawn at Shimla

We had only two days for trip so the first day was decided to visit places within Shimla itself. I had visited Shimla many time before so I was more excited for the next day which we had planned to visit Kufri and experience snow. Well, after getting ready and having breakfast, we left for Sankatmochan Temple which is almost 2 kms away from my relative’s home at Taradevi Shimla. As it was Sunday, so we got a chance to have Langar (community lunch) at the temple. 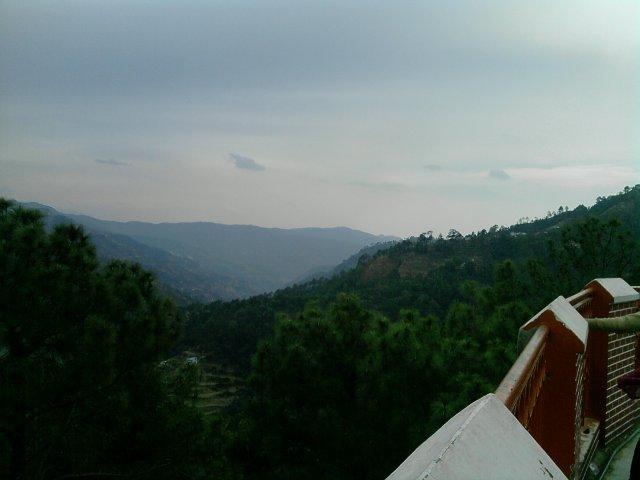 From there we headed towards Ridge Shimla. One can easily travel within Shimla by local buses. We boarded a local bus and reached Shimla Bus Stand after almost 15 min and from there we walked towards Ridge. The first thing that strikes you when you reach Ridge is the classic Christ Church which still maintains its Aura after so many years of its origin. The church is as beautiful from inside as it looks from outside. 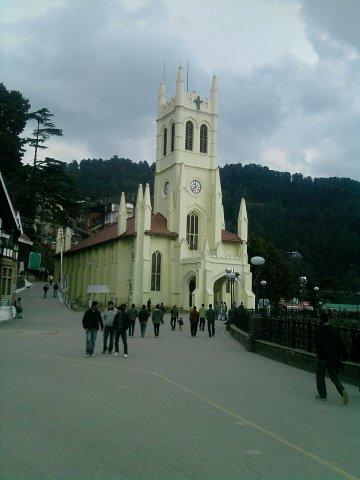 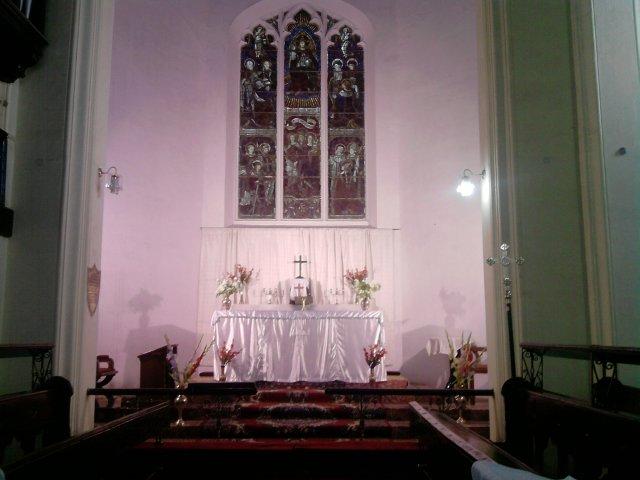 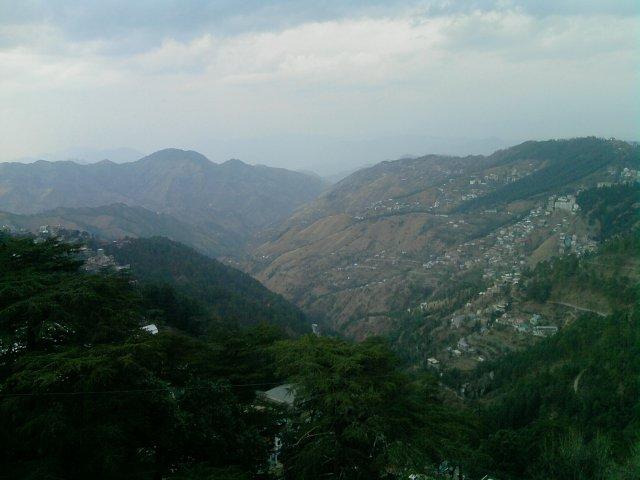 Our next destination was Jakhu Temple which is located at a distance of 2 kms from Ridge and at the highest peak of Shimla. It is famous for the legend behind its origin and lots of naughty monkeys. According to human mythology Lord Hanuman rested on this peak on his way to find Sanjeevani Herb to cure Lakshman, brother of Lord Ram. The temple is built where Lord Hanuman left his footprints and the monkeys are known to be his descendants. 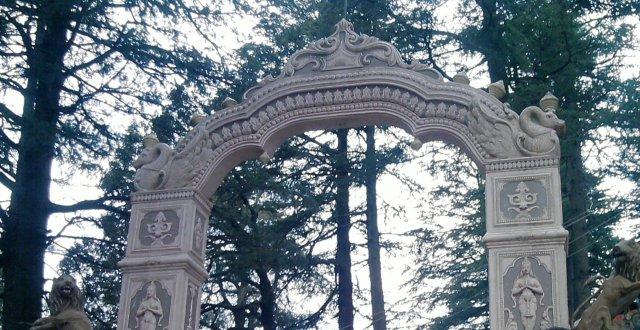 Earlier, one had to walk to reach the temple but now taxis have been started by local administration with which you can just reach there in 10 min and mind it journey by taxi to Jakhu is too scary. The taxi driver was driving very fast without any fear at those steep curves and straight heightened roads but our nerves were getting chilled to experience that adventurous ride. I literally thanked God when we reached temple safely. 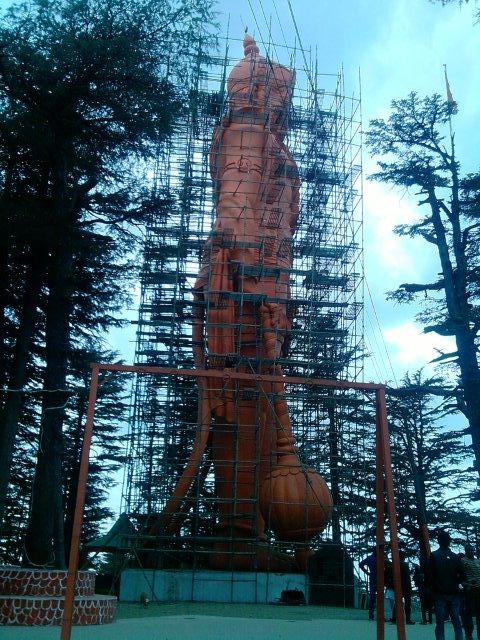 The temple now has world’s tallest idol (108 feet ) of Lord Hanuman. A chilling breeze was blowing at the peak and it was a great experience. I was quite scared of monkeys who were trying their best to snatch prashad from hands, purses, bags and pockets of every person going to the temple. One of them literally checked my husband’s pocket to find something to eat. Never keep your hands in your pocket or let them see your purses, else you will be stopped for a prashad-check by monkey groups.

We stayed at the temple for an hour and came back to Ridge. We had our lunch at famous Indian Coffee House. Though you do not have too much choices on menu but you are quite surprised to see the affordable prices of food items at that one of the oldest restaurants of Shimla. After that we just roamed around the market at The Mall, Lakkar Bazar, Kali Baari Temple devoted to Deity Kaali and Dargah Peer near the home and came back home tired, had a great family dinner accompanied by a round of tea and chat and went to bed for next day trip to Kufri.