It was a long tiring day for us since morning. Finally, we call it a day after attending the marriage around 1:30 a.m. When we reached Allahabad few hours ago, we felt the change in the weather almost instantly. It was much warmer than Delhi, however, we had to use blankets at night, since night temperature dropped a few degrees.  The thought to go to Sangam before sunrise was in my mind. I always use my subconscious mind as an alarm clock in such situation and while I was in deep sleep, my subconscious mind was awake all night. I also wanted my wife & son to join me, but it would have been expecting too much from them. Finally, I managed to leave the place without disturbing anyone as planned earlier. It might have been altogether a different story, if the train was not running late.

It was still dark and street lights were on. There was no fog but, there was a chill in the air. I felt the strong cold breeze in my face, hugs my body and bones, as soon as I came to the road. The main road is within 5 minutes walking distance. The city was also sleeping at 5:30 in the morning. Though, Allahabad is not a new city to me, I was looking for someone for the direction. A rickshaw puller agreed to go to Sangam, which is about 6-7 Km from the place ‘Elenganj’, where we were staying. I felt completely refreshed, as the cool breeze blows through my hair and caresses my skin. The proverbial story of brothers and families getting separated and lost during the Kumbh Mela in Bollywood potboiler, was also in my mind. How big this could be, I wondered! 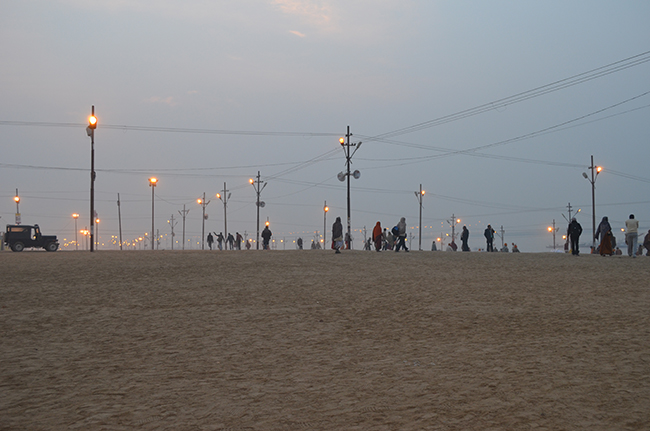 Finally, I was there standing in front of Sangam, believed to be the spot where Brahma offered his first sacrifice after creating the world. Sangam, the Confluence of three of the holiest rivers according to the Hindu Mythology – Ganges, Yamuna and Saraswati. The combined sacredness of the three rivers coupled with the mythological legend, according to which a few drops of nectar that turns mortal to immortal had fallen here, has made Allahabad the Tirthraja or, The King of Holy Places. The Kumbh mela takes place every 12 years at the confluence of the rivers – Ganges and Yamuna – at Prayag in Allahabad. The Mela will go on for two months and will conclude on Maha Shivaratri on March 10.

The Kumbh Mela is specially unique this time as it is taking place after a cycle of 144 years. The Ardh (half) Kumbh Mela is celebrated every six years at Haridwar and Allahabad, the Purna (complete) Kumbh takes place every twelve years, at four places Allahabad, Haridwar, Ujjain, and Nashik. The Maha (great) Kumbh Mela which comes after 12 ‘Purna Kumbh Melas’, or 144 years, is held at Allahabad.

This is precisely why Kumbh Mela organized in Allahabad in 2013 is of a different level and attracts millions of devotees to the shores. It was not a day of ‘Shahi Snans’ or ‘Royal bathing day’, when we were there on Saturday, the 2nd of February. However, the Sangam was full of people, taking holy dip or waiting for their turn. 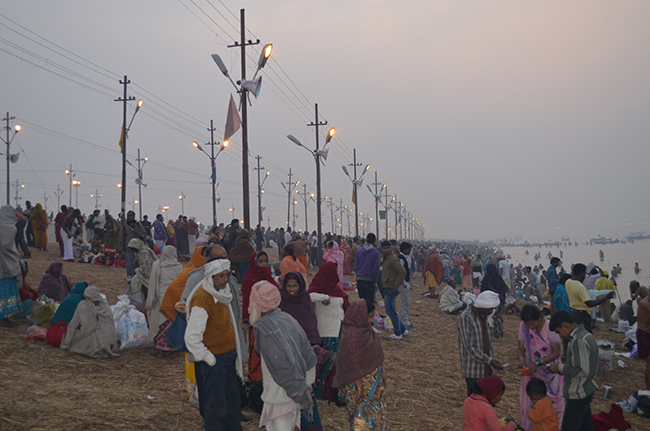 Holy dip in the morning 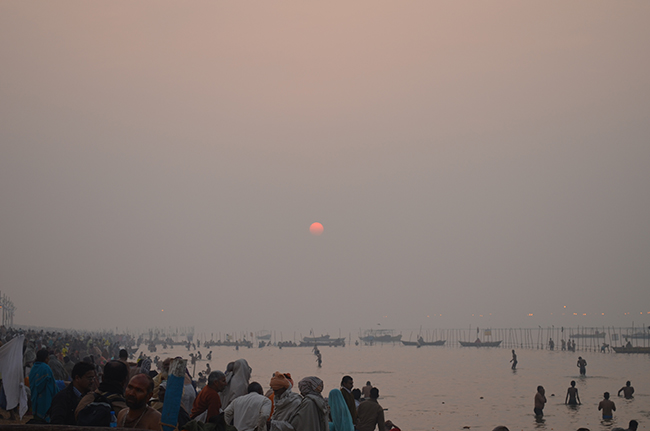 Holy dip in the morning

There was still half an hour for the sunrise. Already several people gathered in the ghat for the holy dip. It is believed that a bath at the confluence of these three rivers increases the bather’s purification by hundred times. Whereas during the period of Kumbh Mela, it is believed that it is a thousand times stronger an influence. 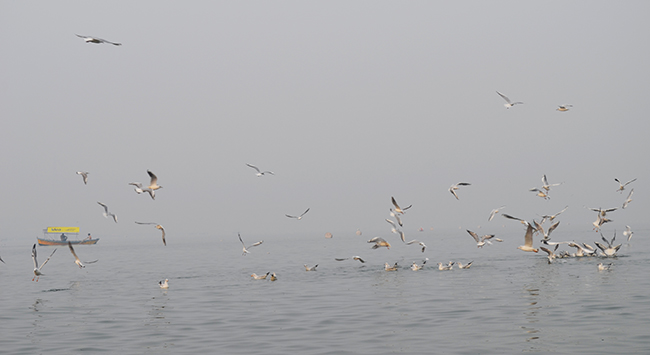 The main bathing days for this year’s Kumbh Mela are Makar Sankranti (Jan 14), Paush Purnima (Jan 27), Mauni Amavasya (Feb 10), Basant Panchmi (Feb 15), Maghi Poornima (Feb 25) and Maha Shivratri (Mar 10). Last time, we couldn’t see Sangam and I was excited to see the place where the brownish Ganges meets the Greenish Yamuna. Both of which have an earthly origin in the Himalayan mountain range, Saraswati on the other hand has no physical form and is believed to exist ethereally, without being visible to the human eye. There is numerous boats available, which will ferry you till Sangam. I jumped into one such boat and very soon found myself in the middle of Yamuna. You can easily identify the difference in color of the two holy water streams. River Ganga is brownish due to heavy soil erosion through out its way; on the other hand river Yamuna is greenish. 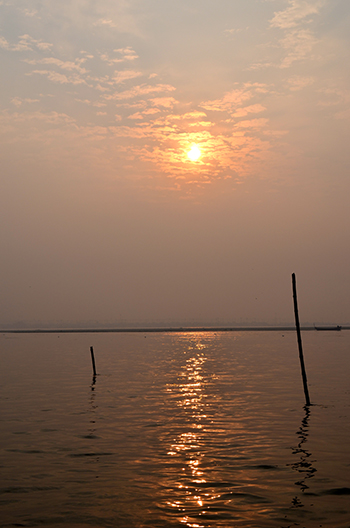 Nice to meet you too. We heard that you were disappointed in Sultanpur. But we will make your day, a promise. 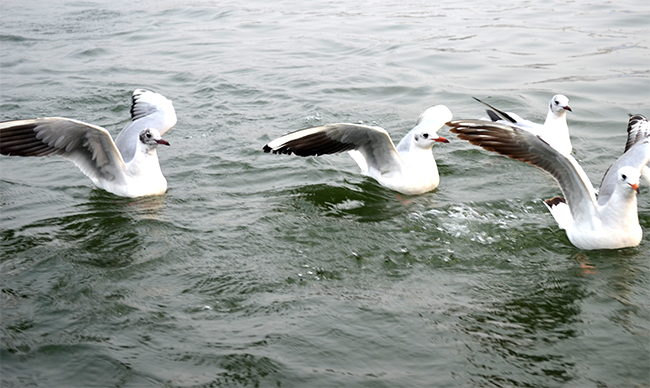 Yeah, it was a handshake kind of experience with our feathered friends. In the winters, Sangam attracts huge flocks of Siberian birds and according to locals most of these birds stay there throughout the year as well. These Siberian birds present a mesmerizing view at the Sangam. Bobbing up and down alongwith the ripples in the calm waters, these Siberian birds are an added attraction. The whiteness of the birds is dazzling on the sparkling clear waters of Ganga and Yamuna. 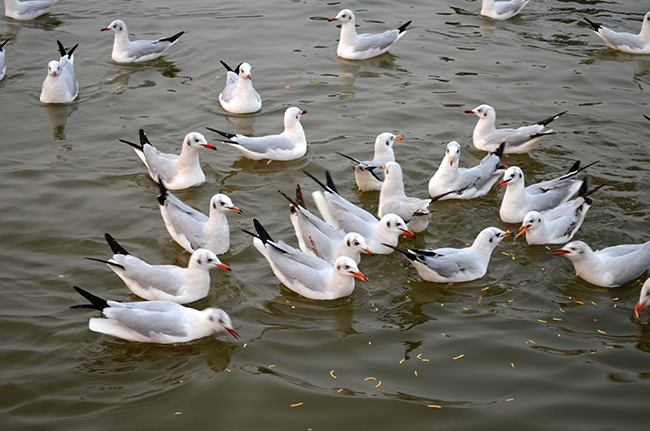 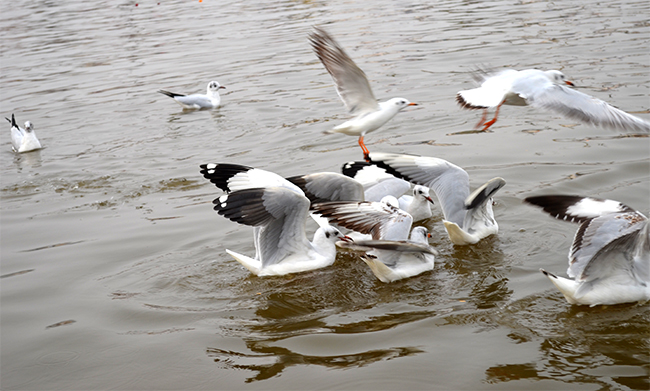 The three hours boat ride in the morning was an experience, I would never forget. I have never seen such a clean Yamuna. It will be difficult for you to believe that the black drain, which leaves Delhi as a sewer, laden with the city’s biological and chemical wastes and the Greenish Yamuna in Allahabad is actually the same. We have spent crores of rupees to clean our rivers, but we still have miles to go in this regard. True, public opinion is growing but still it seems that there is no accountability on this issue. Who does the Yamuna belong to, after all? 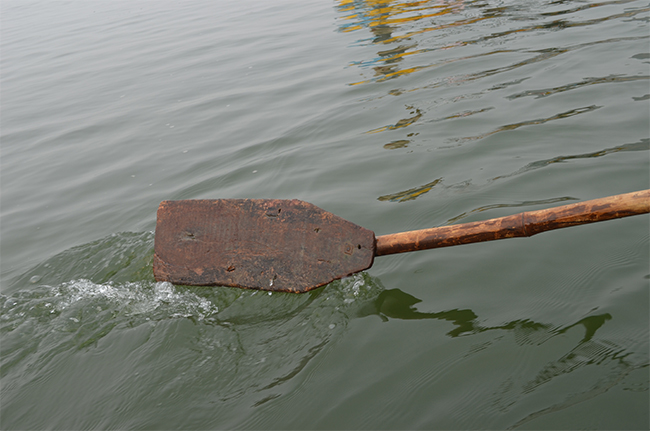 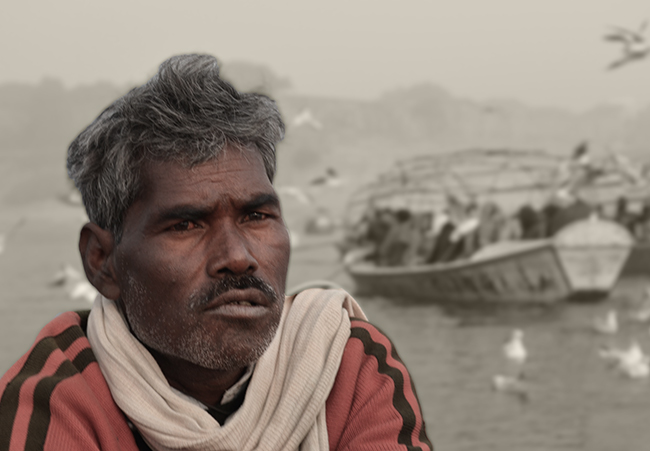 Majhi (the boatman) – Thank you

After spending four hours, when I returned everyone has finished breakfast and curious to know about the mela. We left for Prayag once again in an hours’ time. We searched for the same boatman, as I had to pay him some money and reserved his boat for the rest of the day. Then we went to Sangam and roam around for few hours after taking holy dip together. They were very happy to be there and didn’t want to leave the place, particularly my son. He was very happy to see the birds flying all around him. 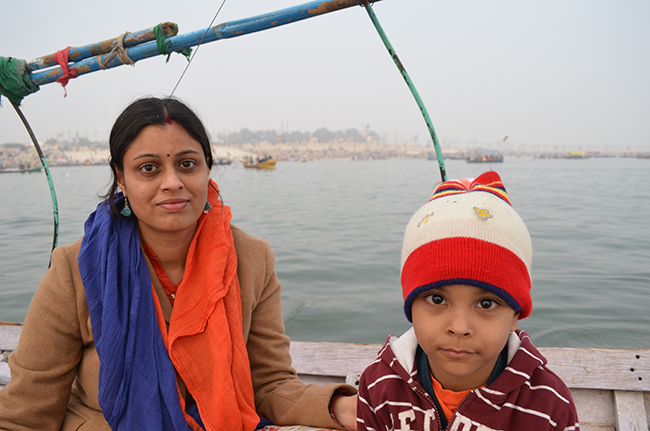 Finally, dream fulfilled for them as well 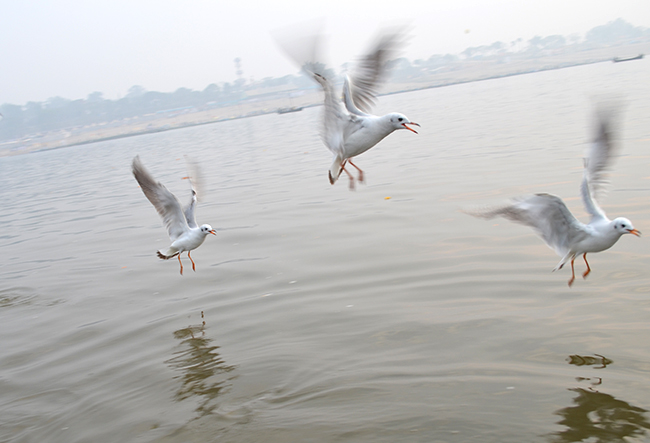 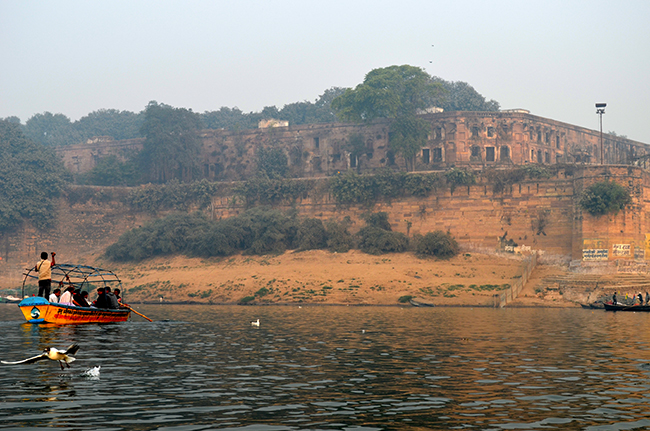 Allahabad Fort was built by Emperor Akbar in 1583. The fort stands on the banks of the Yamuna near the confluence with the river Ganges. It is the largest fort built by Akbar. At present is used by the army and only a limited area is open to visitors.

The meaning of ‘Mela’ is ‘gathering’ or ‘to meet’ or ‘a fair’. Mela can be religious, commercial, cultural as well. We have been in various types of Melas in the past, from rural to urban and ‘am in love to be with the crowds always. Every fair also has its’ own flair, so as Kumbh or Maha Kumbh Mela.  I was in Sangam twice in the past. However, the place seems to be completely changed and it was an altogether different look this time. There were thousands of tents, bamboo cottages. Atop of these flutter thousands of coloured flags of various religious sects. The entire area becomes a tent city, where pilgrims stay. 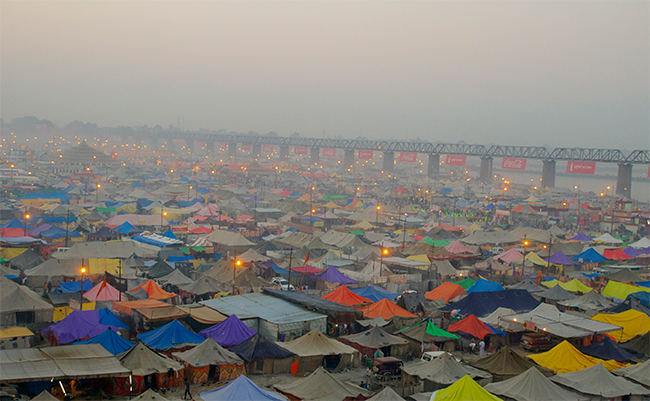 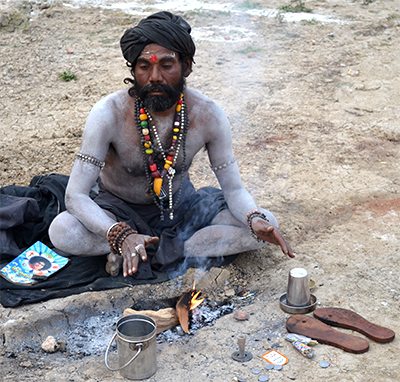 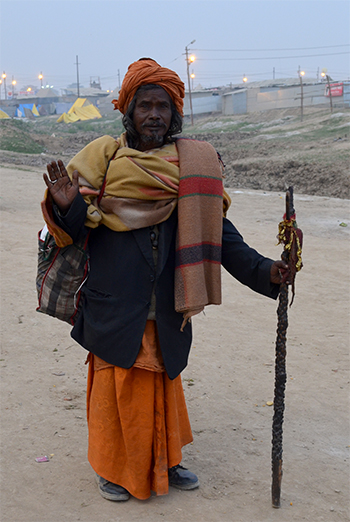 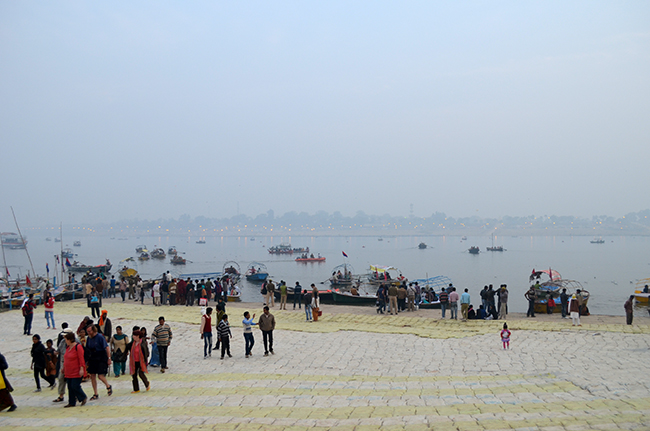 Will come back again…

It was an indescribable feeling to see millions of people, gathered as far as the eyes can see, on the Ghats. I did miss the colorful, magnificent Procession of radiant saints on chariots and elephants at sunrise. Still, the sight is truly spectacular! The administration did a splendid job in organizing a successful mela. There are mobile hospitals, fire brigade and we are impressed with the security arrangements. I will be failed in my duty if I don’t mention about the people of Allahabad, be it volunteers,  rickshaw puller, boatman or the autowalla, we received a warm welcome from everyone with a smile.  I was touched when the boatman told me that I can give him the money whenever I will visit next, as he wasn’t carrying change. The rickshaw puller took the extra pain to carry our suitcases when we couldn’t find anyone and our car was waiting at the opposite side of the station. He refused to take extra money from us and there were few such incidents happened in just one day of our stay. Unbelievable but true. I am neither an atheists nor considered myself a religious person either. Religion is very personal to me and to me only. This is our first experience of Kumbh mela and we considered ourselves fortunate to meet them and to be just a part of Maha Kumbh which takes place in 144 years. That’s the biggest rewards for us from the mela. 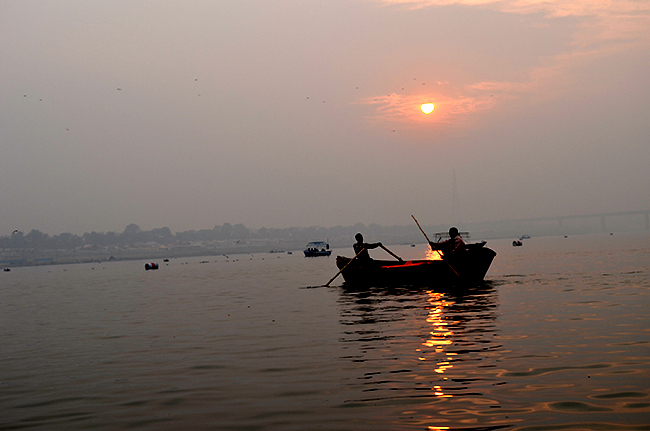 As the sun sets slowly in the west, we wave goodbye with a promise to come back again and pray to the almighty to give us a chance to witness & be a part of another Kumbh mela at some other place, where all the pleasures of a comfortable life are shunned for the time by millions of devotees.

Maha Kumbh Mela – A day in Prayag was last modified: May 10th, 2021 by Amitava Chatterjee

The crumbling remains of the Tughlaqabad Fort are reminiscent of its lost grandeur. Ghazi Malik would toss and turn in his grave seeing his…