With planning for six months, research and discussions in various online forums, finally the day came to undertake this adventurous journey. The next task was to find some like minded companions which led to discussion with colleagues and friends and many of them were willing but none of them had a car with good ground clearance. Since self-driven rented car are banned by taxi union in LEH, therefore it was not an option. Finally we had some family members thrilled for the trip which later extended to kids as no one wanted to be left behind. Four members were supposed to join us from Chandigarh therefore we decided to leave Delhi on the evening of 27th May 2016, 6:00 PM.

For a 10 member group which included 5 kids, we decided to take two Innova cars. The journey started at 5:00 AM on 28th May. Based on our research, we decided to start our Leh journey from Srinagar side on the contrary to most commonly used itinerary which is to enter Leh from Manali side. The drawback of entering from Manali side is that most of the time you drive at an altitude of around 4000m, therefore you may are more prone to face AMS sickness as your body is not acclimatised. You can avoid this problem and fully enjoy your road trip by entering Leh from Srinagar side and use Manali road for return journey.

We had planned to stay in Srinagar, Kargil before reaching Leh. Our Google map was showing estimated arrival in Srinagar by 6:00 PM, but we had an idea that due to traffic situation it may take around 2 hours extra.
After having a breakfast in Anna Purna Vaishno Dhaba (on the road after crossing Nangal), we were able to cross the Lakhanpur Toll at 9:45 AM, therefore we were heading well ahead of our plan with little idea what we are going to face later.

Tip: Pay the toll until Srinagar at Lakhanpur toll to avoid queuing up later at Srinagar border. It will save at least 15 to 30 min of your time later.

Someone told us that ” Samba Mansar Udhmapur road” is quick and shortcut to avoid Jammu bypass. Unfortunately our google map also showed us the same route and we took a right turn from Samba on ” Samba Mansar Udhmapur road”, a mistake we will remember for life. After few kilometres, the road turned into gravel road with road maintenance and road widening work in progress.

We hardly noticed any light vehicle on this stretch, soon road became worst and we were driving through the dust clouds. Most of the road until Udhmapur was in bad condition which delayed our journey at least by 3 hours and also spoiled our mood. We stopped by Mansar Lake (11:20 AM) and clicked few photographs. Found hundreds of bats hanging on the nearby trees.

Later we discovered that road via Jammu bypass though long but takes less time and more scenic and among the one of the best highways. We will definitely use this route in our next journey.

We stopped for lunch in one of the road side eatery in Peerah. Had one of the best Rajmah in a small dhaba and later discovered that this place is famous for its Rajmah served with Desi Ghee.

After Peerah the traffic started becoming worst and we had to face long queue of trucks on most of the part till Srinagar. We were getting little worried because it was our first journey to Srinagar and had little idea about security situation specially driving late night as now our google map was showing 10:30 as arrival time. The heavy traffic delayed our journey by another few hours and finally we reached Srinagar by 11:00 PM.

We were surprised that there was hardly any sign of security issue, many people were still on road and having dinner, overall it looks safe and like any other hill station. Due to peak season, it was difficult to find any hotel around Dal Lake surrounding, but one of the local guy came to help us and took us to few places and ensured that we get the hotel. We tipped him and insisted him to accept. Our first impression about Kashmir and its people was awesome.

As per our initial plan, we had to leave for Kargil next day, but we were all tired and decided to stay another night in Srinagar. We had plenty of time on 29th May to explore Srinagar, and decided to go for Shikara ride in Dal, visit to Nishat garden and Chashm-e-Shahi.

For lunch and breakfast there are various Panjabi dhaba style restaurants on Dal Lake, with quick service and reasonable price. 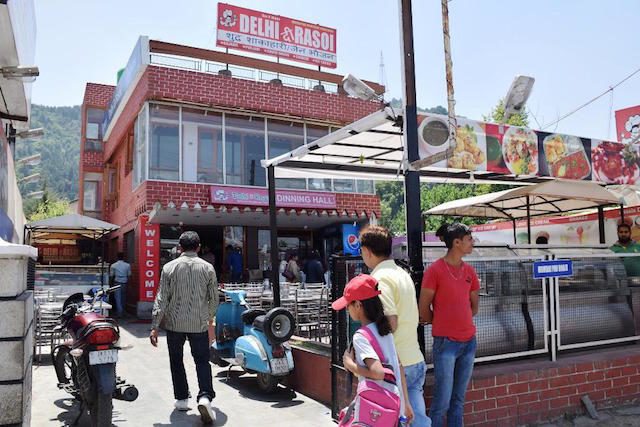 For Dinner, we wanted to try some local cuisines and entered into one of the famous restaurant on Dal lake, Shamyana. I had my worst experience eating in any restaurant, the service was so slow that it took them around an hour to bring some food on our table including starters.

We realized that there were people who were waiting before us and had not serve food. Will suggest to avoid or check on serving time in any of the fine dining restaurant in the city. The food was also highly overpriced. Some local shop keepers told us to go in the city and try Mughal Darbar restaurant which is good and offer value for money.

Based on our interaction with locals, we found that they are polite, honest and helpful. They also warn us to keep away from people selling fake Kesar on streets. Seems many of the locals don’t like the way some people are minting money from tourist specially the one who are selling fake products and offering other services like horse riding etc on unreasonable prices.

Started from Srinagar at 5:20 AM with an intention to reach Kargil as early as possible. We got our tank filled in Srinagar only and had a smooth and pleasant drive till Sonmarg. 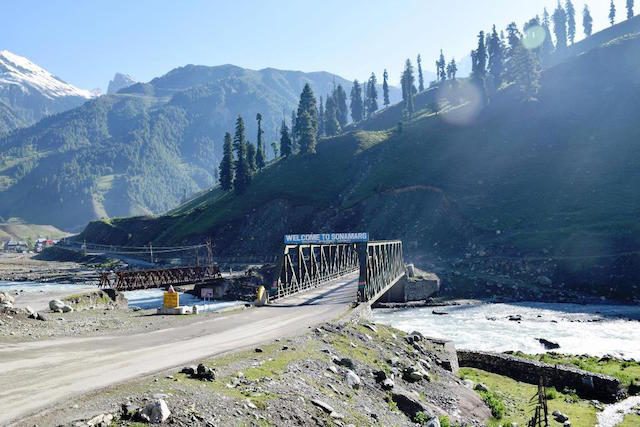 We reached Sonmarg by 08:00 AM, but caught by a surprise that due to an Army Convoy is travelling from Kargil to Sonmarg, we should wait at Sonmarg for 2.5 hours. This was contrary to information we received in Srinagar that military convoy starts from Sonmarg at 9am and we should cross it before 9:00 AM to avoid delays. After a long wait and nothing to do except trolling around, we were allowed to leave Sonmarg around 11:30.

A luxury tent resort in Sonmarg

Our next and immediate hurdle was to cross the famous mountain pass, the Zo-jila pass at an altitude of 3528 meter (this is the at lowest altitude among the five passes in this journey). The road is a dirt road with many of the sections having a bare space for one vehicle to cross. But crossing the Zo-jila (we called it Godzilla :)) was easier due to one way traffic and we realized that waiting time of 2.5 hour at Sonmarg was a blessing as we hardly found vehicle coming from opposite direction. 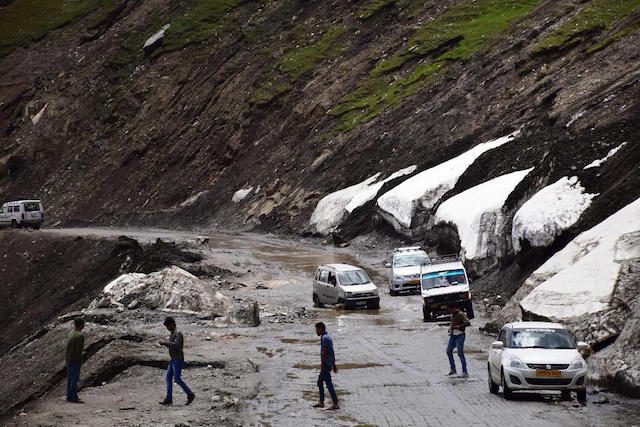 We stopped for a tea break at Zero point at Zo-jila(covered with snow) and took some pictures. We witnessed a big rock falling on a Scorpio (pic later), luckily no one was hurt as the occupants of the car were busy taking photos on the road side. They were shocked but soon we found some of them taking selfies with damaged car :) 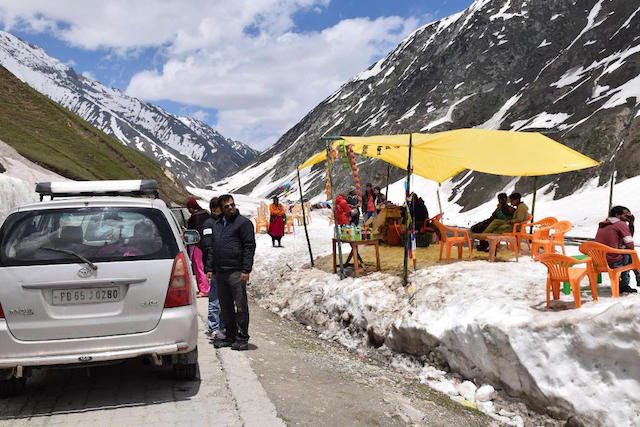 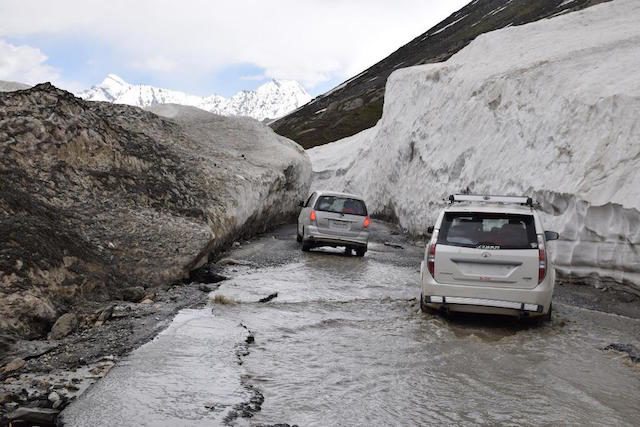 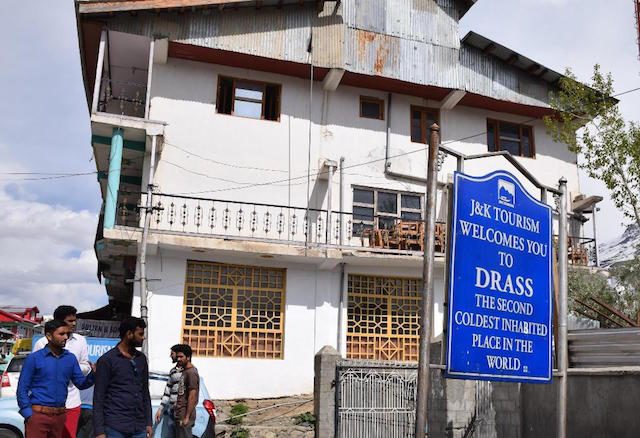 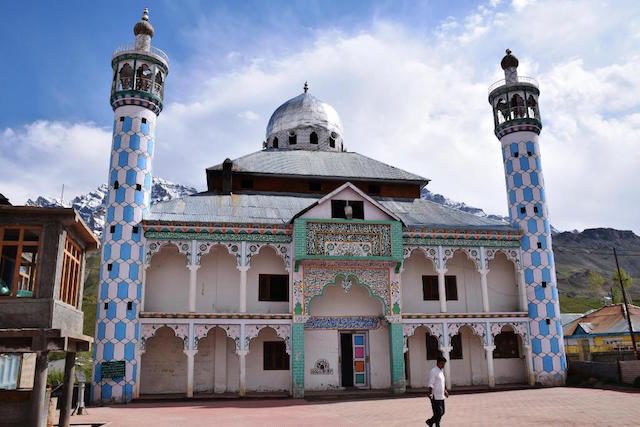 Road from Drass to Kargil becomes excellent with proper lane markings and barricade at dangerous turns. (Same applies to road from Kargil to Leh with minor exceptions) 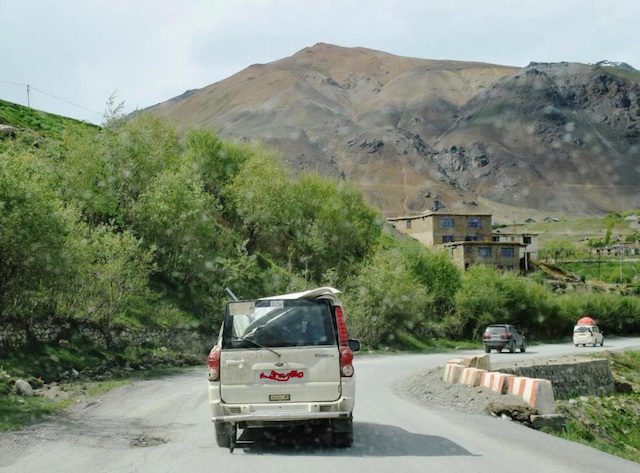 Just after crossing Drass, we stopped for around 45 min at Kargil War memorial. Also had tea at army run cafeteria, good to meet and see those brave soul guarding our borders. This is a reminder how Indian army recaptured this area from Pakistani army who infiltrated the border areas during peak winter when there was an agreement to return to base camps. 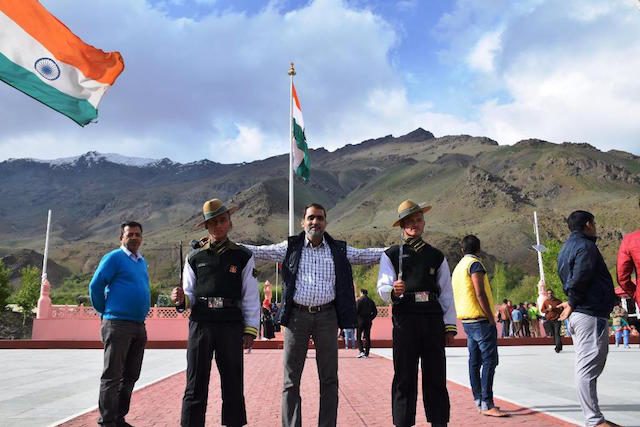 Reached Kargil around 4:00 PM and decided to stay in the first hotel we found at entry point, later on we realized that our first choice was the best choice (Hotel Jazeera Hangout at Suru river bank). Made a plan for barque at river bank, but had to drop the idea due to very heavy wind. Had good dinner and bone fire arranged by hotel staff, seems we were the only guest at the hotel at that night. Impressed with the location, cleanliness, and service of this hotel, overall value for money as hotel is also situated on bank of river Drass. 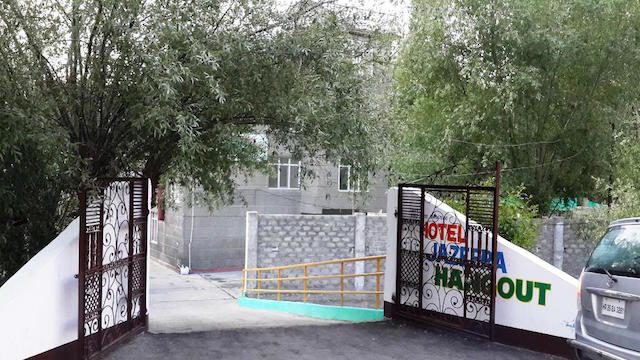 The rest of the journey to be continued soon, in the second part of this three-part series…

An IT professional with specialization in Payment Card Industry. Love to travel and believe that road travel is the best way to explore places, people, culture and food. I have had many road trips internationally and nationally (India), including the most adventurous self drive expedition in an Innova to Ladakh (From Delhi-Srinagar-Kargil-Leh-Manali). Utilize my free time (if not travelling) with gadgets, still photography and gardening.

Our personal experience with local Bhutanses people in our 4 days of stay was very nice & wonderful. They are peace loving people & their country is so neat & clean & unpolluted. Tourism is one of their main source of income. They also have the famous DRUK Brand jams & Tomato Sauce, Pickels etc. We purchased them all.