After awaiting for so long, there we were – standing right outside the Schiphol airport in Amsterdam, we took the train and went to our hotel ‘Best Western Zaan Inn‘, that we had booked about a month before our travel to Europe.

Tip: Book tickets much in advance for better price and availibility

Views of colourful buildings from our hotel window

Day 1- Zaanse Schans – The beautiful countryside and the chocolate factory

As we were extremely tired and were not staying in the main city centre, we decided to explore Zaandam, the area where we were staying. After a couple of train stations, we reached Zaanse Schans. There was a chocolate factory there and it smelled like paradise. My facial expressions were same to as those of Charlie in the story of Charlie and the Chocolate Factory.

We walked ahead and saw some really beautiful views. The sites looked too good to be true. This is where we saw the traditional windmills. 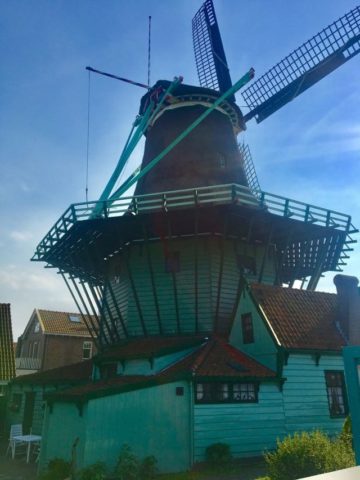 Panoramic view of the windmills from a bridge on a canal

We roamed around and then delved into a small village. There were shops of all Dutch things like wooden shoes, dutch cheese and a lot more. Spending time there was relaxing and beautiful.

On our way back we noticed all restaurants were closed and they got closed at around 5:00 PM. so then we went to a supermarket near our house which was called ‘Deen’ and bought some groceries for the dinner and the next day’s breakfast. We went home relaxed a little, ate dinner and finally after an aeroplane journey of 8 hours had a good night’s sleep.

Day 2- Exploring the city Of Amsterdam and a walking tour

We woke up early feeling refreshed. The time zone does not vary so much, therefore we did not face any jet lag. We had breakfast and then quickly booked a free walking tour.

Tip: Always do a walking tour to get familiar with the place

Walking tours are great, as they are explanative and share stories and myths besides the history; and as they are led by the locals we can get to know tips and their point of view of things. They are also really nice as they’re not expensive and you can decide the amount you find fair to pay them in the end.

The tour was fun and very interesting, the guide also got along the traditional dutch ‘stroop waffles’ and everyone had one each. If you do not know what stroop waffles are, they are pairs of very thin waffles which are stuck with caramel. The width of one is less than 0.5 cm.

Tip: If you want to buy dutch cheese or stroop waffles, they are availible in shops and supermarkets both; though the ones in the supermarkets are cheaper. We bought some and realised that there’s hardly any difference in the quality

Along the tour, the guide showed us different sites in the city. One of which was a building owned by the East India Company, this was where they had discussions and their meetings. He also showed us a cathedral and the red light street. Something else he talked about that caught my attention was that the dutch government and citizens are a toleratant lot and respect one’s life decisions. 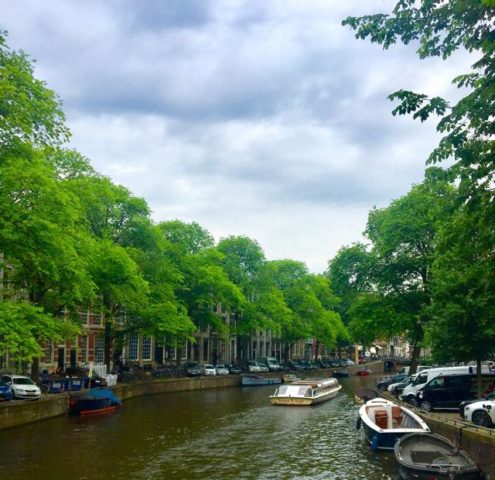 Beautiful view seen while on tour

After the tour, we roamed around ourselves, had lunch and then we went to a park nearby, named Vondle park.

It was huge and the greenery and quite was peacful and relaxing. It had small shops for purchase of coffee, tea and some snacks. One should visit if with kids as there is free open space to play and have fun. Fresh water tanks were located every 500 meters and clean bathrooms were on site.

Then we headed to the Dam Square where on all 4 sides there were shops of famous brands like H&M, Mango, Zara and others if you want to shop. We also saw many performers like people dressed up in different costumes and a lot more. There was also a lady who was making huge bubbles and it was a beautiful sight to the eyes and fun to pop them. 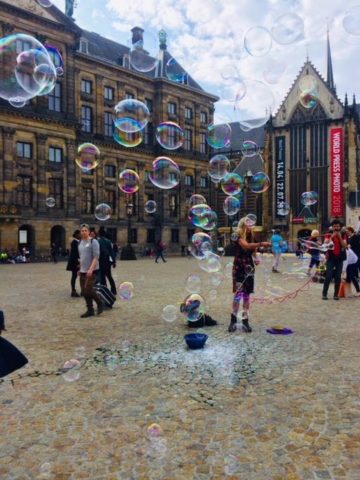 After we reached our hotel we had dinner and slept, all prepared for our last full day in Amsterdam.

One of the best things that can happen to you in a foreign country is having an old friend living there. My mother’s old colleague was living near Amsterdam and she decided to tour us for 1 day.

A canal we noticed before leaving home near our hotel

As she picked us up in her car, we had a quick chat about where we wanted to go and we drove off. The journey was interesting as there was a big sunroof in the car. After a drive of 1 – 2 hours, we reached the Alkmaar cheese factory. There we saw an event that was only held on Fridays and only till the afternoon. In this event, they recreated how cheese was traded and sold in the olden days. There were pairs of men who carried cheese on their back they weighed it, then they cut it, and then it was packed. 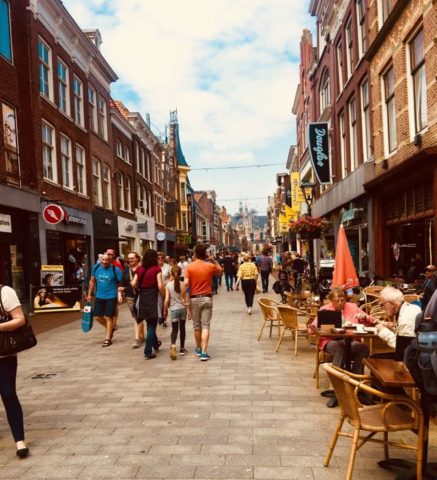 The whole market smelled like cheese. There were many stalls selling cheese over there. People were also selling fresh dutch pancakes, which we tried and loved.

We then went to the Geithoorn village where we saw mesmerising views. I was blown with the sites and the pictures we took looked like edited ones or paintings.

Geithoorn village is a small countryside town and is also known as the Venice of Holland. It has canals for roads and is really, really pretty.

A lot of restaurants were there in the village but as we had already had lunch on our way for Alkamaar to Geithoorn, we just had some snacks.

From there we went back to Amsterdam and saw the main centre where there is also present the “I AMSTERDAM” structure.

After a long day we now went proceeded to our hotel, packed our bags, had dinner and then went off to sleep.

And off we go to Paris.

Not all who wander are lost. Love to travel and see the world. Theatre and music enthusiast.

Dates (28th June to 21st Aug.) have been already announced for The Amarnath Yatra 2013 and duration has been extended to 55 Days. Yes, this is for first time in last 5 years, that Yatra Duration is set over 50 Days. Last time, it was only in 2008, the Duration of Yatra was 58 days. In 2012, Shri Amarnath ji Yatra was reduced to only 37 Days, for which the J&K State Government & Shri Amarnath Ji Shrine Board had faced a lot of heat from the various Social & Religious Organizations.