Next morning we left early & followed Manali highway and reached “Karu”. Road from Leh to Karu was in a good condition and the journey was fast paced. We reached “Karu” in less than an hour. From “Karu” the road bifurcates to “Shakti” a small village at the foothills of “Chang La” pass. The road till “Shakti” was mostly straight and tarred with beautiful sceneries around. It was 10:00 Hrs & we decided to halt for breakfast at “Shakti”. All we could get there was hot veg. Maggi, Momos & Tea. 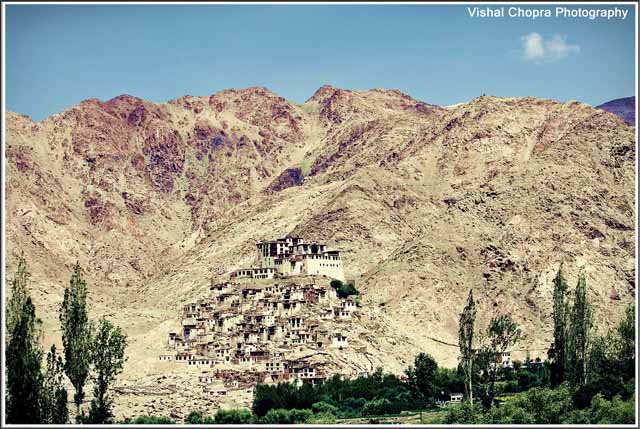 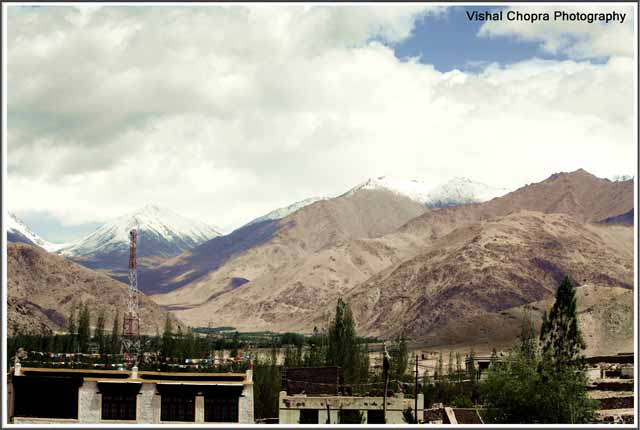 While continuing our journey on tarred roads we met with the real ascent for “ChangLa”. Most parts of the ascent were steep and initially the road was good. As we approached the final few kms road started to deteriorate and became steeper. We reached to a point called capt. Point, where My Explorer started to struggle & couldn’t move any further due to lack of oxygen and sheer load on it. We all put our best efforts to go uphill. But, after 2-3 unsuccessful attempts we gave up.

We left our bikes in steady position at that incline. The spot had a small temple in the name of an Indian Army Captn. We stopped there for some time and took a break to gain some energy & make a strategy. We decided to push the bikes uphill to that point where the engine can generate enough power on its own to go on.

We started with the oldie – my Silver Electra 350 which Surya was driving. Without much difficulty & with some mild push & with full throttle Surya comfortably managed to cross that patch & covered a good distance of roughly 300 mtrs.. He stayed there waiting for us. Rambo & I came back & we did the same with my bike, which was carrying the maximum load. I took off with support from Rambo & he signaled me to stay there with Surya as he mentioned he will be able to make it without any support. Me and Surya were waiting for our dear friend Rambo Rawat but he failed to even start his bike. I sensed some trouble & decided to go downhill on foot.

Remember we were putting our mind & bodies under tremendous pressure @ 17,000 fts with minimal oxygen level around. Even after acclimatization and doing KhardungLa. ascents of Changla were not easy for us. Leaving aside bikes & Surya I went back to Rambo & diagnosed the problem. There was a battery connection failure. In no time we fixed it up & with full throttle Rambo was off & reached next to Surya. Now I had to cover these 300 mtrs on foot as there was no other option left. I managed to walk around 50 mtrs & noticed my heavy breath & sweat. I decided to slow down & look for some help from any passing by vehicle. Words of “Veeru Paahji” were striking my mind, “ChangLa – the steepest & the toughest, no wonder why it is called The Mighty Chang La”.

Soon to my rescue I saw a Tata Sumo coming from behind. I indicated for some help & it stopped. The driver asked me to stand on the rear footrest and grab the carrier as it was all full from passengers. I was standing out in the open air on the rear footrest. After reaching to our point I thanked the driver for the help extended, in their local language – “Julley”.

The moment I got there Surya was all excited to narrate his part of the story. The time when I left him there with the bikes he experienced a shower of shooting stones mixed with snow balls (not an avalanche). He started reciting “Hanuman Chaalisa”. His prayers got answered & in no time everything came back to normal. It was a fearful experience for him. Situation on the other end, where Deepak & I were stuck, was also similar but not so intense.

This incident, while reading this travelogue, may sound a little exaggerated & give you a reason to smile today but, believe me it was not the case that day. That was a life threatening situation which he faced. The entire experience was challenging and memorable.

From there onwards we easily covered the journey to the Top which was just 3-4 kms. For us “Chang La” was the second highest pass after “KhadrungLa”. The moment we reached the summit, the first thing we came across was the temple on the top, called “Chang La Baba ka Mandir”. The weather suddenly changed & there was a little  snowfall. 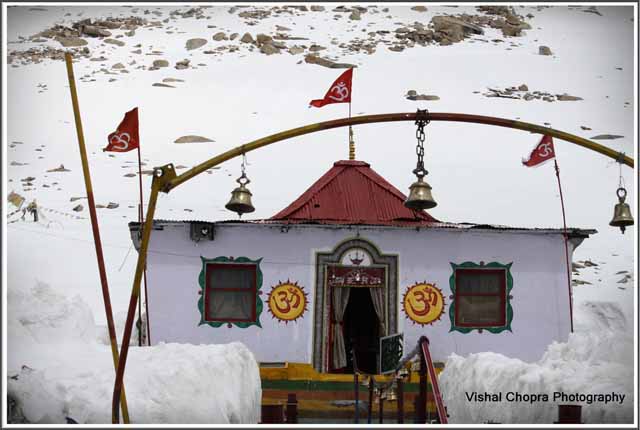 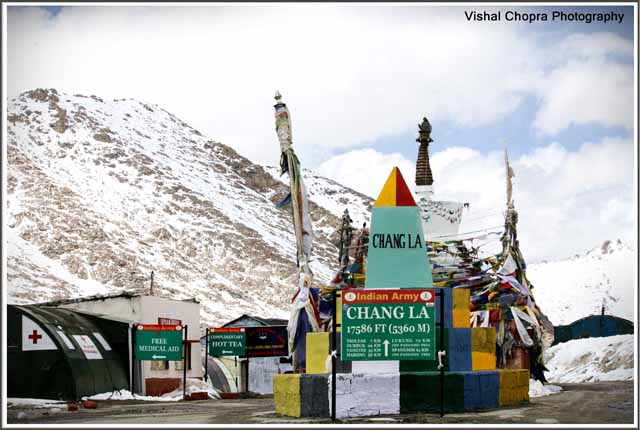 After spending few minutes on the top we continued our journey for “PangongTso”. Again the roads were in bad shape for few Kms & soon we landed at “Tangtse” – a relatively bigger town than “Shakti”, with few shops and small hotel option along with internet facility. 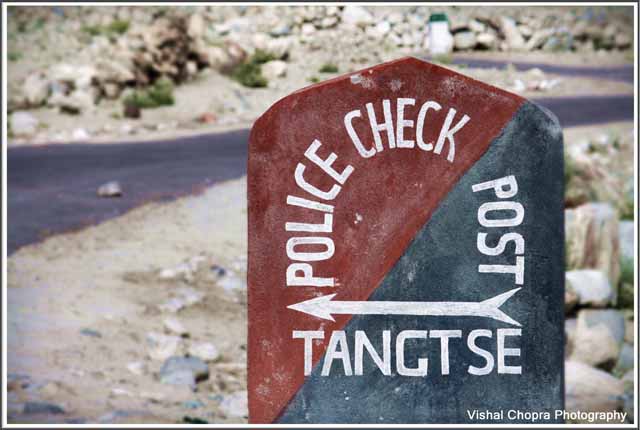 At “Tangste” we were stopped at a police check post for verification. All travelers on this route need to register themselves at this check post before proceeding further in the inner line border to witness the beauty of “Marsemek La”, “Phobrang” & “Spangmik” on the banks of “Pangong Tso” lake – one of the beautiful salt lakes in Ladakh region. 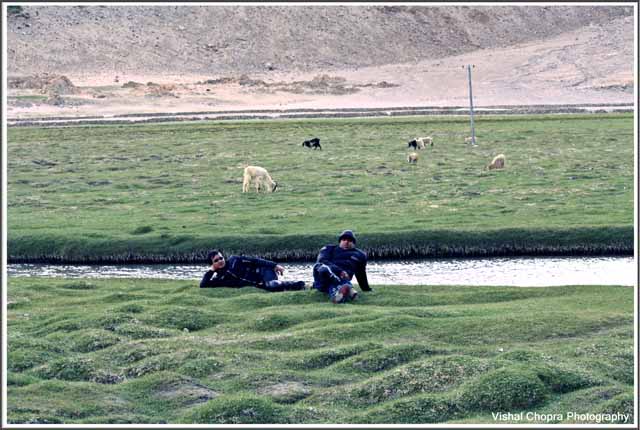 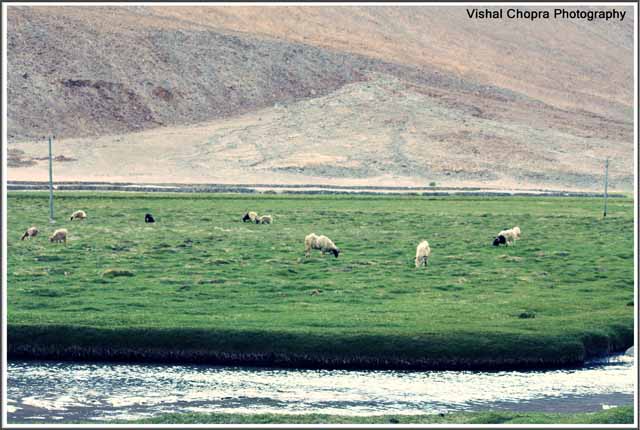 Road after “Tangtse” was very well laid. Many travelers do the Leh – Pangong Tso excursion as one day trip and come back Leh by night which leaves a very little time to praise & witness the beauty of “PangongTso”. However, this was not our plan at least. We reached “PangongTso” @ 17:30 Hrs & the first thing we looked for was a Dhaba tent for the night. All the tents were booked in advance by tourists from Leh. You can see in the picture Rambo coming back after an unsuccessful attempt of finding a place @ “PangongTso”. A local Tent wala advised us to check for accommodation at “Spangmik” which was another 10 Kms away from that place. We were extremely tired & decided to check for space @ “Spangmik” rather than pitching our own tent. 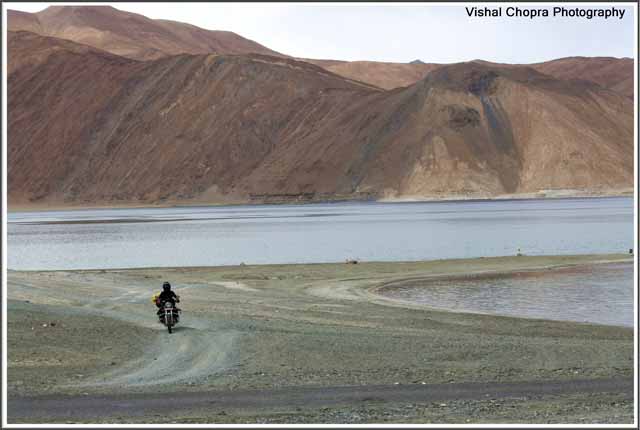 From here the road turned into sand and rock filled dirt track. The small settlement of “Spangmik” was visible from an distance of approx. 4 kms. It is the last village up to which travellers are allowed to go.

Without much effort we easily got a decent temporary made accommodation “a Kachcha makaan” made from mud, wood bars & stones just a few meters above the Lake. After doing the last few kms of bone shaking ride & after our regular unloading exercise we were all so tired that our bodies refused to move any further.

The winds were quiet fast & cold after the sunset. But, the beauty of the lake was so alluring that we could not resist to the temptation & we made our best efforts to reach the lake. We celebrated our success and the sense of achievement was easily visible on our faces. We took some photographs & enjoyed the beauty around. 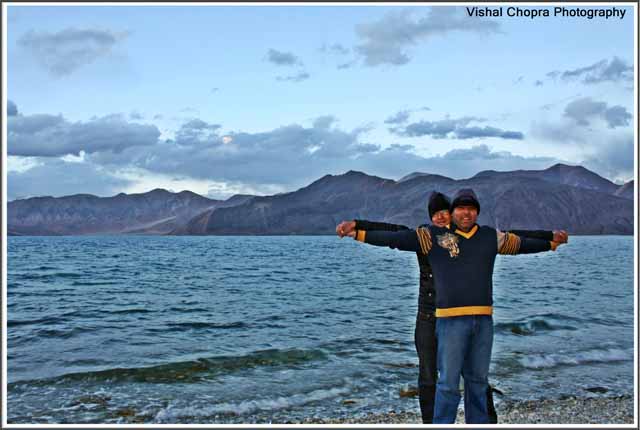 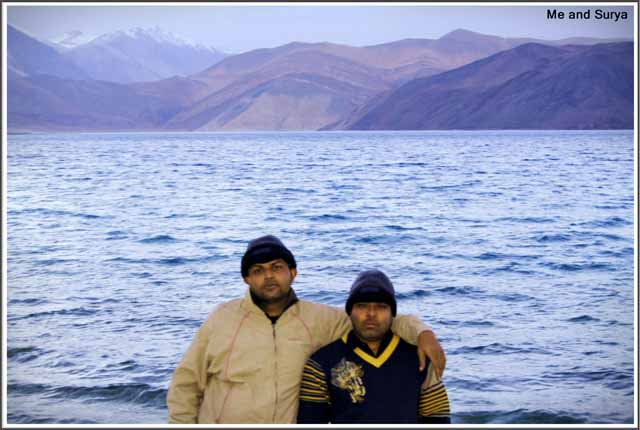 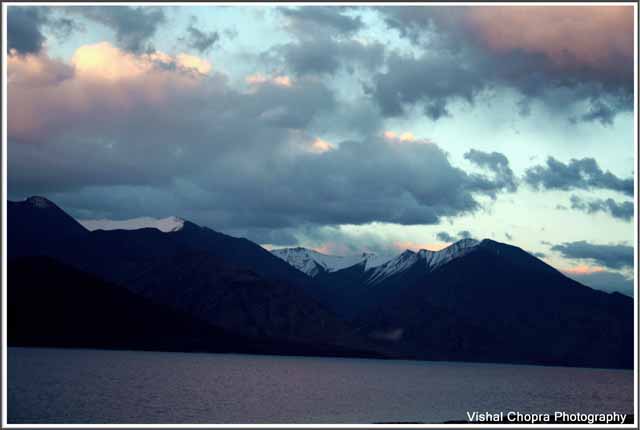 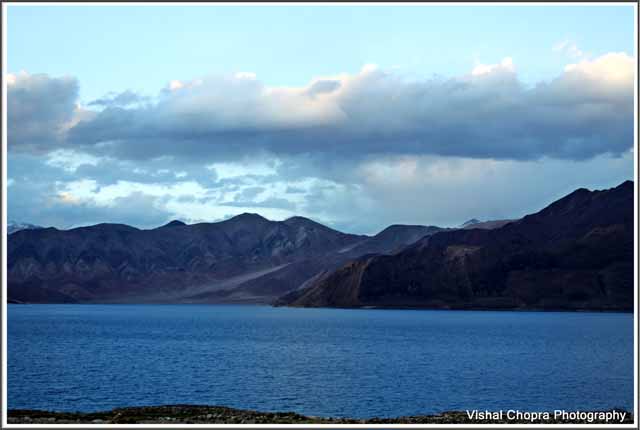 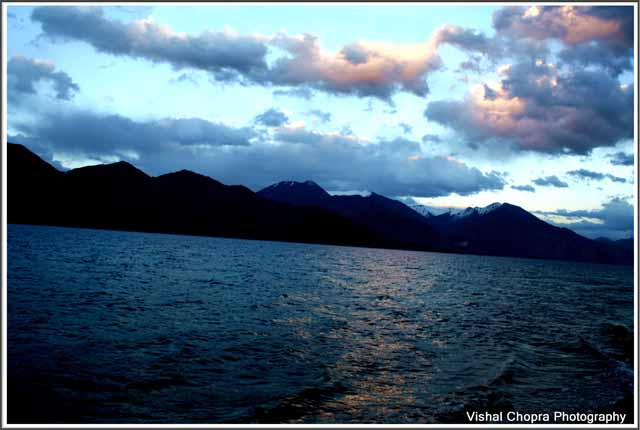 Suddenly the weather started to change & the winds became more intense & cold. We decided to come back to our night station & do the rest of the photography in the morning. You can see bad light & dark clouds in frame. 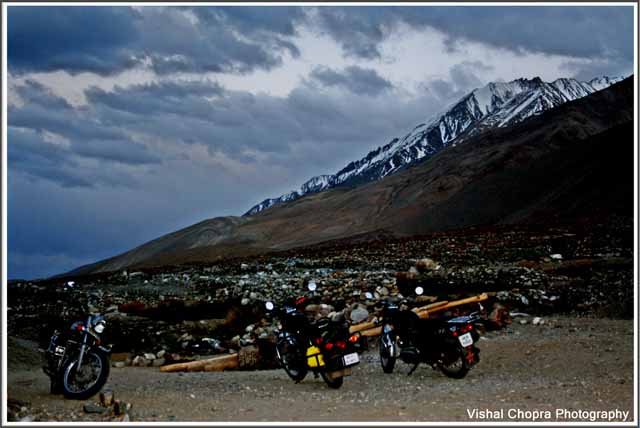 It was 19:30 Hrs & we were relaxing in our camp. As per our custom it was time for celebration but we hardly had any drink in our stock.

Rambo “The Rescuer” thought out of the box. He checked with the owner about the availability of some local made stuff. Guess what the old man had a good stock of locally made grain beer called “Chaang” which was available at the cheapest price possible, Rs 25 per bottle. 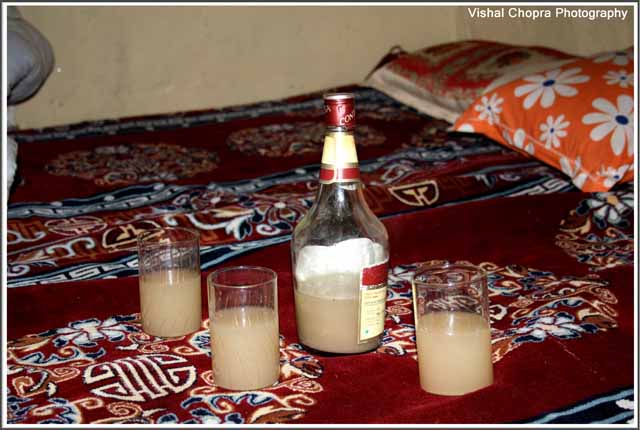 “Andha kya mangay do aankhay” was the reaction J. We were up on our toes & helped the old man in organizing the party. Impressed by our interest in their taste & likings the old man gave us some extra blankets for the night. Surya was so impressed by the hospitality that he spent around an hour with that old couple in their house listening to their stories & discussing about their family etc. We had two bottles of “Chaang” that night & we hardly had anything else.

Next morning we got up early & captured some beautiful morning views near the lake. We just had a cup of tea with the old couple and bid farewell to them. 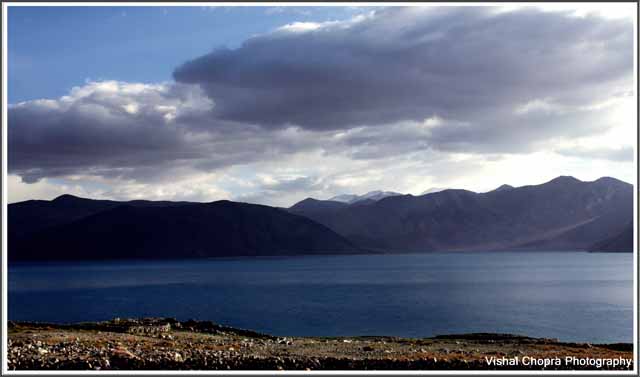 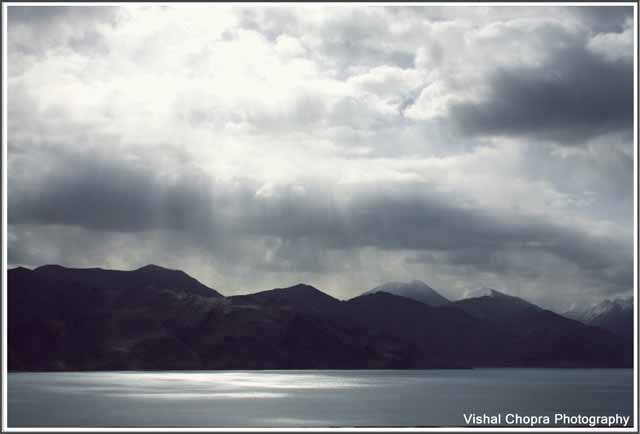 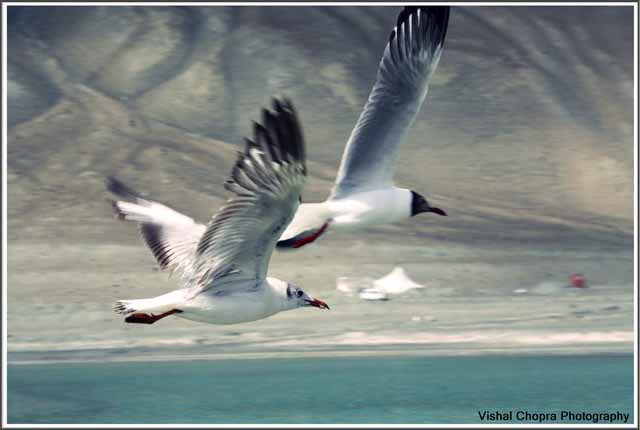 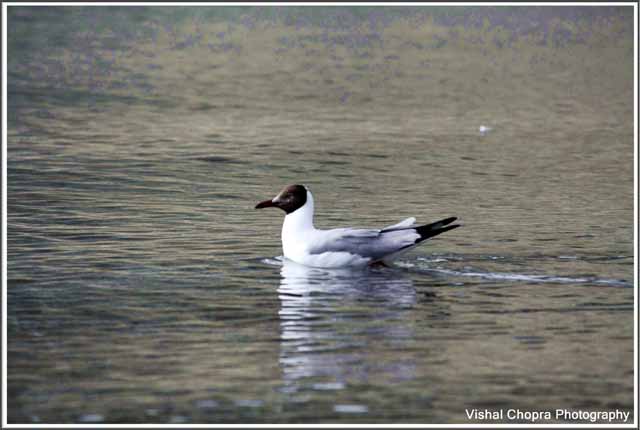 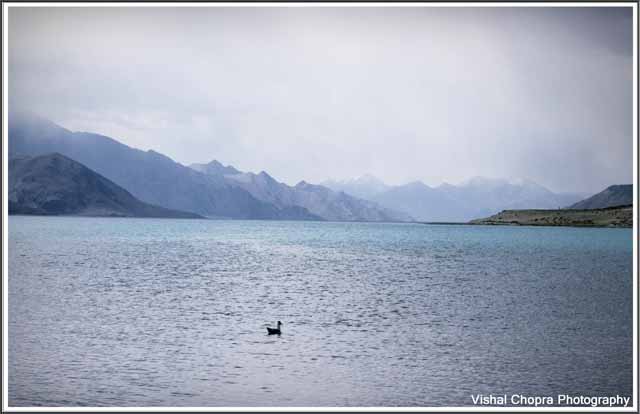 On our return journey we planned to spend the night either at “Rumtse” or “Pang”. While coming back we thanked “Changla Baba” for keeping us safe & making this ride successful. By the time we reached “Shakti” it was 15:30 Hrs & we took a break for lunch at the same Dhaba where we had b’fast last morning.

During our discussion I made a proposal for going back to “Leh” once again & motivated both for having beer in the same bar to which Surya & Deepak agreed without any hesitation. In fact, we all were happy to spend one more night at Leh as we were in love with that beautiful place. We pulled up our accelerators, & reached “Leh” well in time.

We bought some “Pashmina products” for our families back at the home & then headed straight to our concerned point (The beer bar). We enjoyed the evening to the fullest as that was our last night in “Leh”.

A traveler at heart and an adventure follower . A big bullet fan... gradually became a Rider. Apart from traveling and riding love to spend time with family, and enjoy with Kids at home.

Somewhere around Ajmer our GPS asked us to take a left turn on an elevated road and we dismissed it to continue ahead. We stopped about 25 km ahead from that point for petrol and enquired about directions to Chittorgarh. To our dismay, we had missed the turn and this mistake could cost us over an hour.