After the monsoon, when the constant and uninformed pitter-pattern or thunderclaps has ceased – mud laden riverbed soared high with dash of green, vermillion, magenta, scarlet or growing yellows liberally brushed over the crust of Earth anew; I set forth to my new exploration.

“Let’s go for the waterfalls…” although the best time to visit a waterfall is during the peak of monsoon. The rushing watercourses and slithering greasy rock beds undoubtedly increases the serotonin level of body. Nevertheless, after the monsoon (for a ‘working man like me with claustrophobic schedules’ managing a day-out is too difficult) I started scouring pages of many a website, travel journals, and traveller’s forum looking for a waterfall nearby.

The city of Hyderabad where I live, though, having plenty of ancient ruins and monuments to look around but, weekend travel hunts is a rarity. In fact, the recent Telangana Government too also seems un-interested to promote travel hubs where people can unwind. Anyhow, I got a weekend and determined to make a trip – this time.

‘Kuntala Fall…ah!’ a 3-hour drive from the city of Hyderabad (or) Secunderabad – the twin city. However, transportation is a big flaw unless one hires a private car or owns private vehicles. Nevertheless, one Saturday I booked a cab and set forth.

The small hatchback with two of us – the driver and me; drove speedily before the traffickers take to the road and the 45-minute journey scale up to hour-and-half; filling the surroundings with cranky horns and recklessness. Nearby to Bolaram, the car switched to NH7 leaving SH43 as we drove towards Medchal, a northern suburb of Hyderabad and the largest mandal in Rangareddy District. The place Medchal was once a preferred resort to the Nizams of Hyderabad due to its fig borne lakes/springs grown in the surroundings [Med (Fig) and Chellama (spring) in Telugu] is now a lost glory to rumbles of constructions and busy bazaar. 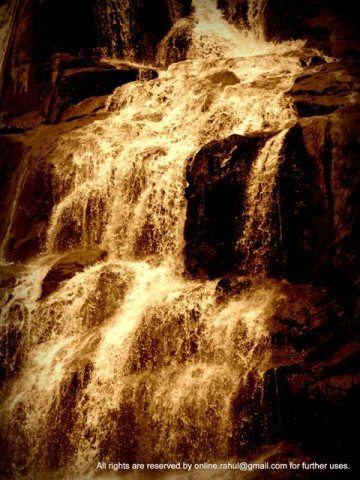 The highway from Medchal to Nirmal via Toopran, Chegunta, Bhiknoor, Yacharam, and Saonpet is a non-tiring journey with well-built 6/4 lanes girded by thick iron railings, fresh painted road signs, tarmac driveway. [Note: Road trips are not my kind of travel; I prefer travelling in a state-run transport or railways; but this road is worth a drive.] 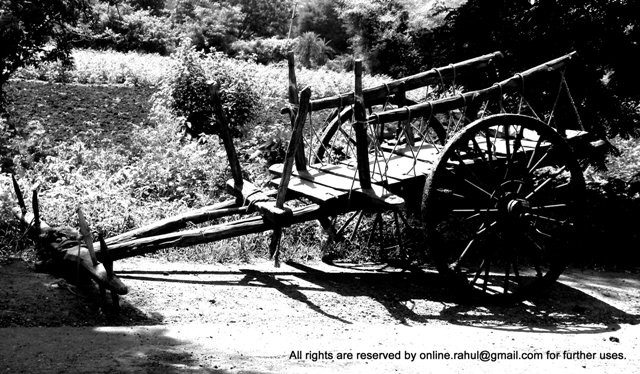 We reached Nirmal; a 400-year old historical town that derived its name from Nimma Naidu, the 17th century ruler and a great patron of handicraft arts and paintings, is now a den to many illegal activities. We stop at a roadside local eatery for the typical South Indian breakfast before we resume our journey.

The region remained a prominent city for all South Indian empires – from Kakatiyas to Chalukyas, to Qutub Shahis to Nizams famous for its lacquer painted craft toys carved from local softwood. South India, unlike the northern states remains a lazy bummer where people love toying to their bed until noon; and Nirmal is no exception. The shops are yet to open and the market is yet to get crowded. And, it is worth mentioning that food was bland, tasteless served on unhygienic steel plates. [When travelling around India (especially the rural areas) the best option is to act ignorant.]

No sooner we left Nirmal and the highway, the condition of the roads and the surroundings changed altogether. The incessant honking or speedy vehicles are no more be seen. Stranded bullock carts…slow-moving motorbikes with heap of haystack on its back…line of electric poles on lush green fields…crowns of yellow corn and maize swinging in the air. The chipped tarmac road replaced with soft red soil, potholes and bumpers of varying ranges. Thankfully, it is after-monsoon and the sun was not blowing fiery hot. The cool, clandestine, cumulous cloud with occasional patches of darkness overhead as we drove through the Nirmal Road with sloping small hills; under the over bridge near Neregonda and many a dusty village roads of Sowergoan and Kuntala till we reach a mountain-top with dense forest – Kuntala Falls (Down the Stairs. Please carry your belongings and Do NOT jump in the water.) A Statutory Signboard welcomed us.

Formed by Kadam River, a tributary of Godavari River which enters Telangana from the south-west coast of Maharashtra; Kuntala Falls is the highest waterfall in the state measuring 147ft (or 45m).The river enters the region from Khanapur where at the confluence – the Kadam Reservoir Dam is being built to facilitate irrigation of about 25000 hectares of land. I am not a dam freak…so; I walked down the 400 steps from the entry point to the waterfall.

Okay, I must reveal my true intention to visit Kuntala Falls. And, it was not the streaming waterfall cascading from the cliff ragingly. A secret fable related to waterfall dated back to the mythologies – The story of Shakuntala – the Queen Exile. 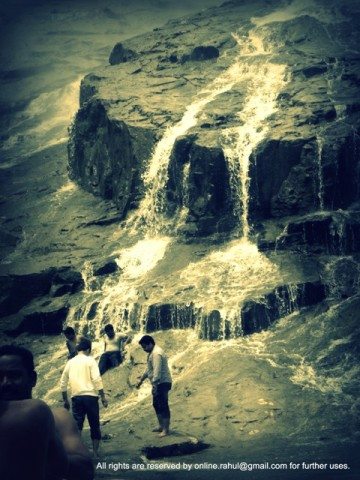 The beautiful Shakuntala is the protagonist of Kalidas’s famous play ‘Abhigynashakuntalam’. She was born of the sage Vishwamitra who during his deep meditation was distracted by the danseuse Maneka on behest of King Indra. During the copious act, they beget Shakuntala who was later forsaken in jungle. In the Adi Parva of Mahabharata, it is reclaimed that Rishi Kanva found the baby surrounded in the solitude of the wilderness by śakuntas (vultures) and thus, named her accordingly. Later, the sage took the child to his ashram on the banks of River Malini, which rises in Sivalik hills of Himalayas.

It is believed that the scenic waterfall was named after Shakuntala who was found abandoned in the picturesque environ of Kadam River or Kuntala Waterfall. The regions has similar lore’s and some of which claims that King Dushyant spotted Shakuntala bathing under the Kuntala waterfall and was so besotted with her beauty that both got married. Another version of the lore suggest, after King Dushyant failed to recognize Shakuntala when she paid her a visit (because of curse spell of Rishi Durvayasa) – the pregnant Queen settled in the locales of Kuntala Falls where she borne Bharata, the founder of Bharat dynasty and ancestor to Pandavas and Kauravas.

Whatever be the story, there is a strong correlation found associated to the waterfall and life episode of Shakuntala. So, what allure me…the place must be so beautiful that people can fall in love or get desirous. And, I must say I was not disappointed.

The brimming water cascading through the snaky trail falls into a deep gorge where it calms down and flows to a landlocked rocky plain surrounded by many a rare floral and faunal habitat. The gurgling sound of continuous flow of water as it hit the rocky caverns embalms the inner solitude. Set amidst the wilderness Kuntala waterfall is a heavenly sight. One must experience the spectacle of water splashing down and turning into whirls. Owing to this powerful surge, you can feel the air in the region crammed with mist of the darting waters. The cool breeze, with the whiff of flora around, makes the whole atmosphere simply wonderful. In the monsoons, the splendour of the cascade becomes more beguiling 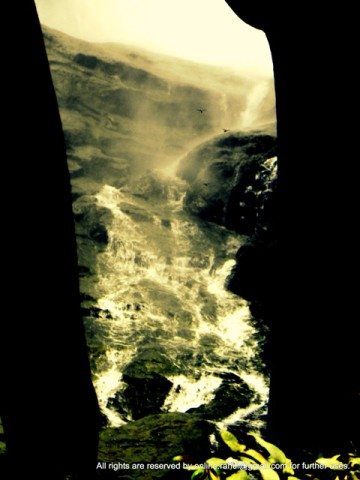 The jungle area with tall trees rare floral species is a dense and rich in wildlife, but I have not noticed any. Birds of different kinds and butterflies, worms and caterpillars, fresh moss and soft delicate fissures of leaves on muddy grounds are a common sight. There is a small cave naturally engraved in the rocks adjacent to the waterfall is the temple of Lord Someshwara Swami where the local tribes come every year to offer animal sacrifices. [I failed to spot the place.] 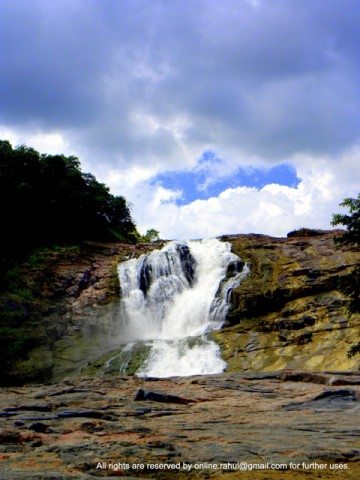 Before reaching the top of Kuntala falls the stream widens in a flatter area of rocky bed and protrusions. At the mouth of the waterfall, there is a rocky mound resembling ‘a lingam’ that separates the gushing water into two before it falls into the gorge as a big furious waterfall and, the other is a slow cascading silent stream. Falling magnificently from 147feet, silvery water splashes down forming a thunderous uproar, Kuntala Falls also earned disrepute of being the risky undercurrent causing death; suicides is common (especially on Saturdays). 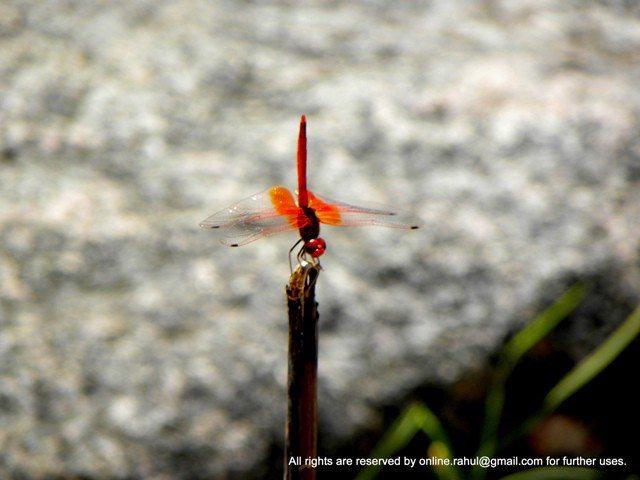 Picnickers and adventurous young groups are a common sight so does the revelers.  We spend a good deal of the day until the sunray start melting and get bleary. We decided to drive back to Hyderabad, as there was no accommodation available nearby. Anyhow, the day spent in greeneries, rumbling water and drizzling road made a journey refreshing and worthwhile. 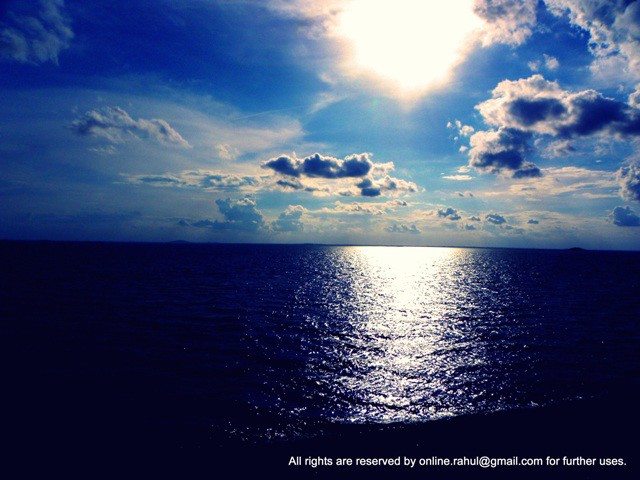 [Note: Apart from Kuntala Waterfall, two other waterfalls namely Pochera Falls and Gayatri waterfalls are one of the many waterfalls in and around Nirmal town. Away from the human eye, the waterfalls found its habitat in a very remote place inside a deep tropical forest.]

Kuntala Falls – In Search of Shakuntala (The Queen in Exile) was last modified: January 23rd, 2022 by Cheeni_Kum

Dalhousie-Khajjiar-Chamba Excursion Apr 12-15, 2007 – By Ripple (ripple4it@gmail.com) It was a Thursday before a long weekend, due to elections in Noida on Friday…