It was past 3 P.M. when we reached Nainital. The narrow lanes of ‘Mall Road’ now cramped with busy diners and snarling traffic mayhem. We skipped our lunch and continued with the journey to catch the setting sun over the mountain cliff. The January sun was warm and ebullient.

Struggling via the Kilbury Road – a birding route with rows of hotels and cars parked haphazardly next to Eco Cave Garden (that we ignore because of its fabricated creation) we finally stopped at a furlong close to Jim Corbett Gurney House. The old-fashioned cottage built in 1881 belongs to Miss Margaret Winifred Corbett, sister of famous hunter-conservationist Jim Corbett. A typical English colonial style house with its roof built in the typical Nainital style in which no nails are used. Small sheets of tin folded inwards on the sides and a wooden log fitted in between the folds to hold them. It is now a well-preserved museum and managed by the government.

No sooner did the car stop a young pony rider approached with cyclostyled rate card: “Five hundred…thirteen spots…,” he pointed to the photographs on the album that he worn around his neck.

Initially my oversized sister was seemingly hesitant with the idea of pony riding on the muddy mountainous trails. My reason to be reluctant is primarily that I would love to scale the mountain on foot. Nevertheless, we hired two – each one for us.

Riding on a pony is not as comfortable as one would imagine, with the deposits of snow making the slim path muddy and the ponies struggling to climb, dodge, and balance. One could notice the horror, and the shrieks of apprehension with their life stuck in the fate of the pony. It was a complete drama with my sister slipping and dropping-off the pony back; and repeatedly asking the pony riders if everything will be all right.

We reached the first point called ‘Khurptal’ after few easy strides. The water hamlet (representing horse hoof) looked like a wisp of glassy green from the mountaintop surrounded by lush green meadow spreading vibrant cover with conifers head filling the empty space and snow-clad mountains standing straight producing a charming contrast. On the other side of the cliff, where we were standing (with mesmerizing view of Khurptal) is the edgy Deopatta Mountain – a superb rock formation resembling a sitting camel with its hump upright. 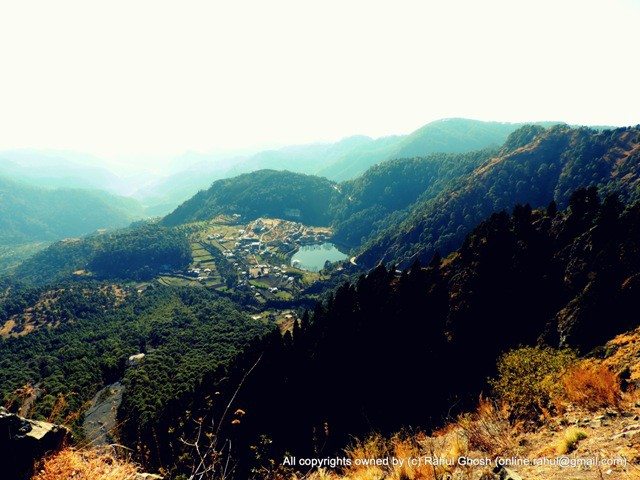 The 2,422m edgy Deopatta is a deep and densely wooded valley which starts on the saddle between Cheena and extends through Kaladhungi. The cliff has an important role in Corbett’s expedition to hunt for the man-eaters of Kumaon. Any clear day, the view of the mountains and the Khurptal Lake is soothing to soulful sojourner. Anyways, we saddled back to our ponies and climbed further. The point from where we loop-start our journey is called, ‘Land’s End’.

Gradually, the trail gets leaner and after awhile – there was no muddy road. The ponies start to trot over the big boulders and rocky surface underneath while we two city birds are balancing atop with pouncing hearts; all the time holding the saddle in a strong grip.

“Snow…snow!’ my overweight sister screamed in excitement pointing her finger to a patch of grassland locked up tall deodar and olive trees.

“This is Tiffin Top! People comes here on every weekends and spend the day picnicking” the 16-year pony rider informed while we saddled down to enjoy the snow walk. 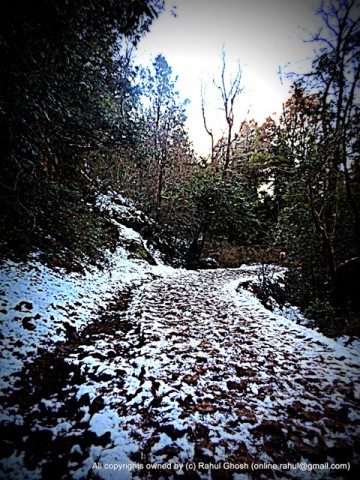 I got problem especially with distorted facts and concocted storyline verging on imagination and beliefs with no historical evidences or whatsoever. Indeed, the small patch of locked land that we were ice walking is a beautiful and serene place; (for families with their picnic mats and baskets lazing under the sun) but this is definitely not the Tiffin Top but some unknown halting place. The worst cases of travelling in India are the countless eccentric and falsified claimed points by the tour agents, drivers, tea stall owners and definitely, distant fellows you meet in your life. 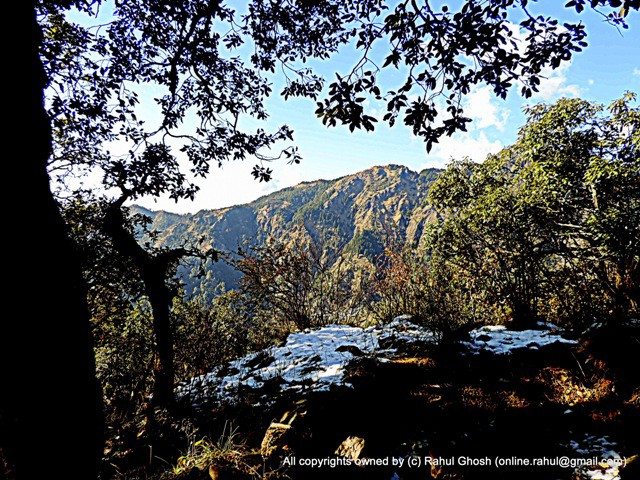 A patch of locked land and snow

Anyhow, five more minutes of pony riding while it trotted through risky edges crackling the iron hooves against the stony bed we reach the top; the real ‘Tiffin Top’ or as it’s otherwise familiarly called ‘Dorothy’s Seat’. 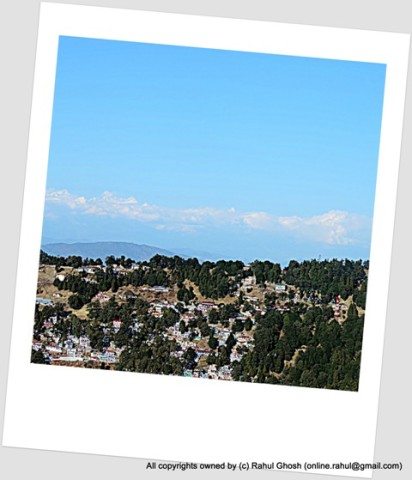 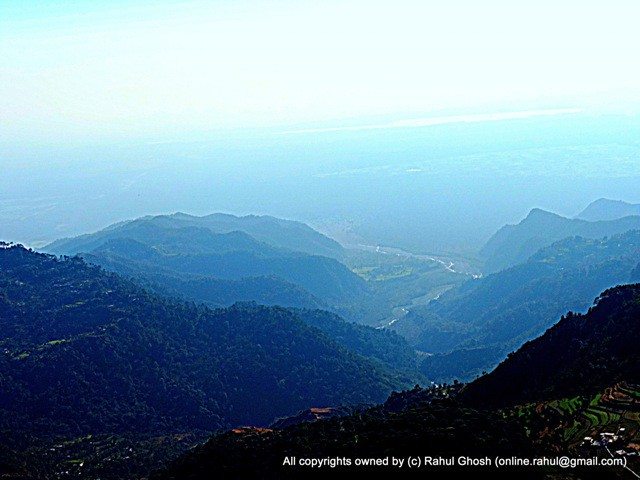 A shot of the valley from Dorothys

A terraced hilltop with iron perch, the place built as a memorial to Dorothy Kellet, wife of retired British Army official Col. J. P. Kellet after her death from septicaemia [blood poisoning] aboard a ship bound for England. The place earlier named as ‘Tiffin Top’ still popular among the locals has some breathtaking view of the city and the surroundings. However, one has to be lucky with clear sunny day. For the rest, there is a Steiner binocular affixed to a tripod to see the different cliff heads and obviously ‘snow-capped crown of Nanda Devi’.

Underneath, there is a vast and beautiful plain of Nainital city with conifer hedges, cluster of colonial buildings; and resplendent sunshine hoodwinking thick cover of floating mist – the place is worth a watch. True to its name, the place might have been once been a sought-after locale among British families who would roll out rugs in the dappled shade and lazily spend their Sundays enjoying the great mountain views while tucking into savoury and sweet treats from a hamper.

[Note: The tradition of carrying treats and fine foods in a hamper first came to Britain with William the Conqueror. However, the word picnic derived from a French term. According to Alan Davidson’s magisterial Oxford Companion to Food, the word can first be found in a 17th-century French text (as piquenique), where it refers not to an outdoor feast but to people who have brought their own wine to a restaurant. The term is a combination of the verb piquer (meaning to pick) and the word nique (meaning a small delicacy, treat or trifle.)]

For any fellow traveller visiting Nainital, I would recommend to skip the pony-ride and trek to cliff enjoying great surroundings and dense forest. You might discover some very breath-taking and silent moors enroute. Therefore, if you are adventurous kind and free from bouts of asthma or arthritis I would suggest instead following the way where the pony walks look out for the slope (positioned diagonally opposite to the Deopatta hill) where-from the tourist returns. Follow the path of the slope and walk up the hill through the muddy lanes. It’s easier route to reach the top instead of pony riders. Another alternative is to get the cable car (one-hour trip) ride to reach the hilltop if either trekking or pony backing is a preferred choice.

When we climbed down the hill, the sun was tired and about to retire but dusk is yet to come. We decided to return to hotel and retire the day.

“Sir, you must see the Sariyatal…” the driver, informed,

“Another lake…” I was a bit reluctant about another lake view and a hectic day.

“No sir. It’s got a famous waterfall”

“OK. How far is that?” I enquired with uncertainty.

“On the way to hotel, if we follow the Kaladungi Road” he informed as my sister nodded signalling him confirmatively.

Crossing the blind turns around an almost heart-shaped lake that was visible from Dorothy’s Seat, we stopped at a point with milky streams of water gushing down the rocky beds. Not an impressive sight during winter but, I am optimist about the place getting makeovers during monsoons when the flowing the stream swells with incessant rumbling of water song. We preferred to return to hotel and rest awhile.

By the time we reached our hotel, night was yet to approach but dorky dusk has already eaten all of the day’s light. My sister prefer to dine-out and try the steaming momos (dumplings) and shop – so having gulped down two cups of tea we stepped out of the hotel and take a stroll of Mall Road. 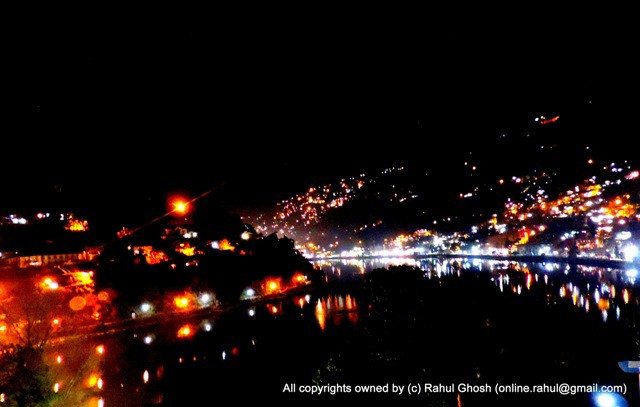 Evenings and nights in Nainital has nothing much to offer except of lazily walking by the promenade or get a boat ride over the rippling water of Naini Lake. I was told that the Nainital Boat Club having great ambience from British era with a lake-view bar but it seems functional only during the tourist seasons.

The famous Naini Devi Temple at Mallital draws large crowds for the nearby bazaar that sells warm colourful mittens, jackets, hand-knitted caps and fashionable accessories at low-cost. On the other side of the temple rows of roadside eateries serving vegetarian snacks but most of the foods are tasteless. My sister bought bags of pashmina shawls and pair of hand-knit gloves and we decide to return to hotel following the lake.

As we, briskly walks to the hotel with bright constellations and shimmering moon shining overhead, cool January breeze ruffled my hair. From the hotel’s balcony, we watched illuminated city and its reflection waltzing on the still water of Naini Lake – the feeling of calmness I experience would always remain unexplained.

Trip to Nainital – Around the Town was last modified: January 22nd, 2022 by Cheeni_Kum

24th Jan – Port Blair -> Havelock Today we were destined for a tour of Havelock & Neil island. This trip comes close to…