Note 1: Please check for the updated highway numbers as per the re-numbering of the National Highways across India, wherever you see NH in this article.
Note2: Google Maps is the best resource for guidance on highways. Take the most of the usage of Google Maps for highways, it’s just wonderful.
The best part of the journey is the drive on the Durgapur Expressway (NH2) from Kolkata to Tarapith and Shantiniketan. In Kolkata this road is well known as Dilli Road. This highway is one of the best in the country. It is a straight wide road without any bumpers and the best part of the journey is the scenic beauty. The drive to Tarapith starts with taking the Kona Expressway after the Vidyasagar Setu and heading straight. At this point it is important to be careful and not take the NH6 which will take you towards Mumbai. The Kona Expressway further ahead becomes NH2. If one keeps travelling straight, Kona expressway will become the NH2 ahead. We started at 5 AM to bypass the rush hour. 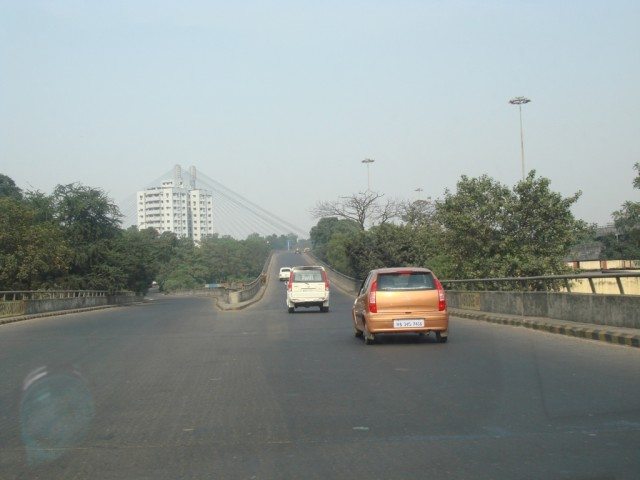 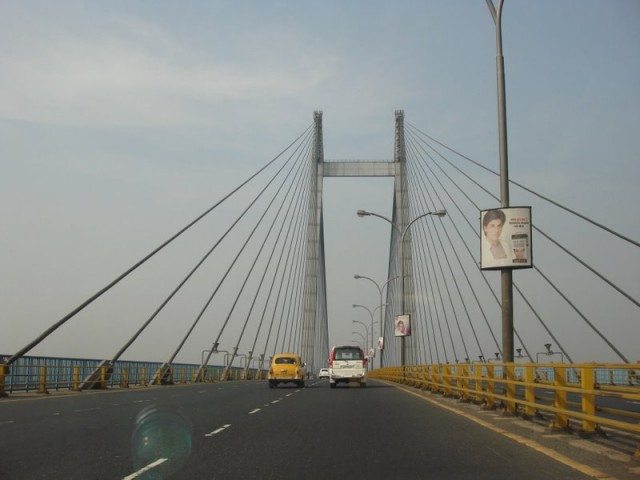 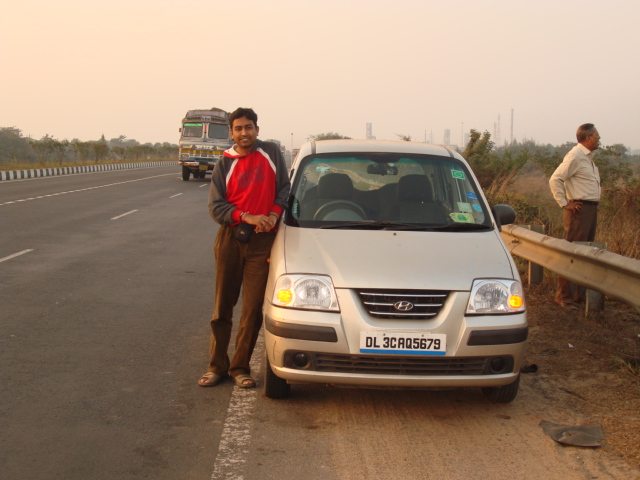 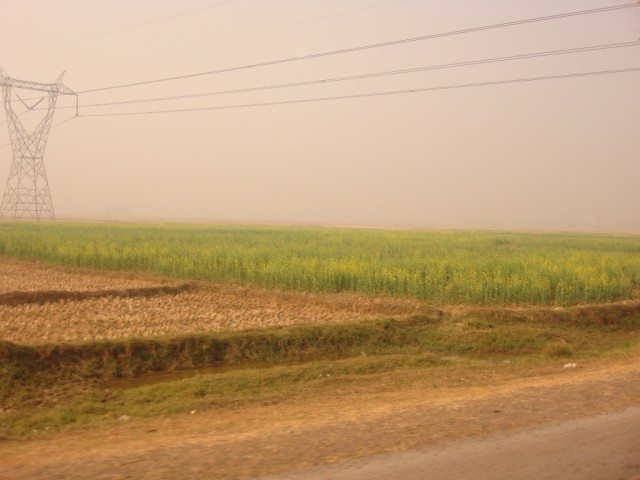 Another view of NH2-Durgapur Expressway

However the cold and intense fog played spoilt sport and our speed was limited to 40-50 KMPH for almost half an hour. It was only around 6:30 AM when the fog reduced and we were able to gain speed. The Durgapur Expressway is in very good condition and a speed of about 120-130 KMPH can easily be maintained with an increase upto 150 KMPH.

Shaktigarh or Langchagarh as it is normally known is around 100 KMs on way. It’s a place to have a lovely breakfast and tea. It’s called Langchagarh because of special huge size langchas (a special Bengali sweet) being famous here. Almost all the shops around are named with langchas there. So one can take a 15-20 minutes break here before continuing. On way are places such as Dankuni, Singur, Memari, Palashi, Burdwan, Kaksa and before reaching Durgapur, there is a place called Panagarh Kaksa (around 152 KM), where we need to take a right turn to take the route to Rampurhat for Tarapith. From there it’s another 119 KM to Rampurhat. For a while it will be State Highway (SH7) which will ultimately connect to NH60 at Dubrajpur and we have to turn right to go towards Rampurhat. 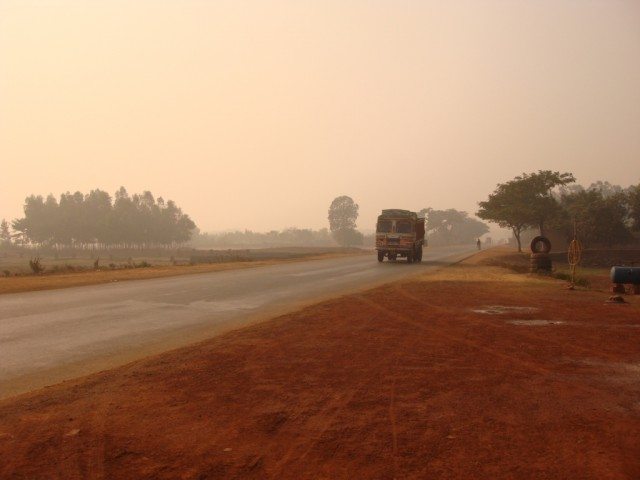 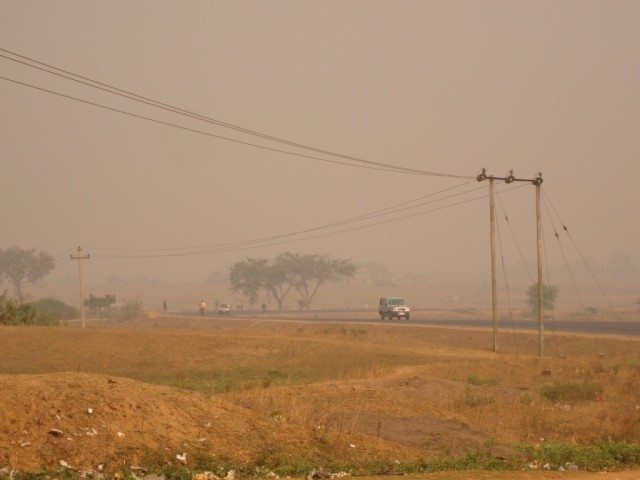 NH60 is also known as Panagarh-Morgram highway. We do not have to move upto Rampurhat, but way to Tarapith is a right turn around 15 KM before Rampurhat. Be aware of the directions and keep asking people, they will guide you properly.
The good thing one finds about West Bengal is that even the state highways are in excellent conditions and one will just love driving in there. Special attractions in the route are double storied huts which are unique in West Bengal. 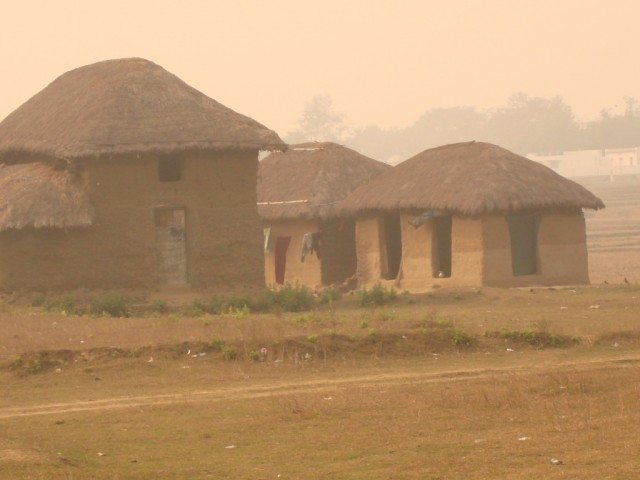 A two-storied hut on the Express route 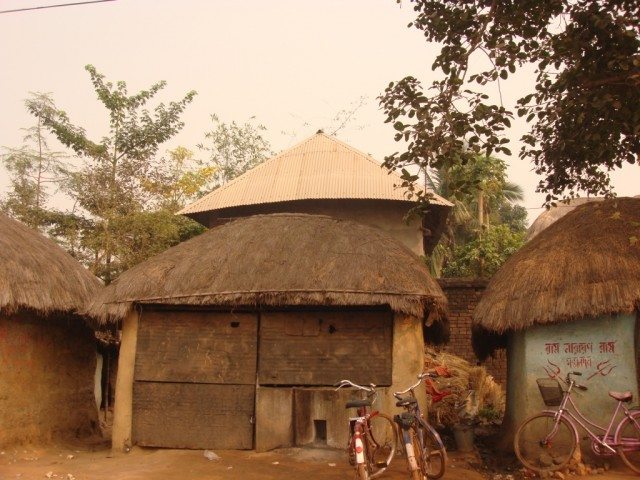 From Tarapith the next destination was Bakreshwar (in Siuri district) the same day. We had our plans to cover the temples and the hot water spring in Bakreshwar by the first day itself. Accordingly after completing the visit to the temple in Tarapith and finishing the Darshan, we made our way back to NH 60 post after noon. To visit Bakreshwar NH 60 back towards Panagarh Kaksa will lead to the district of Siuri and from Siuri a right turn onto SH 7 will lead towards Bakreshwar (total around 65 KM). Unfortunately we got our tyre punctured on way and that wasted around 1 hr including repair. Anyways the State highway leads directly to Bakreshwar and we reached there by evening, but that was almost the perfect timing to reach there. On the way two beautiful small rivers Bakreshwar River and Ajay River are crossed. It was almost jam-packed because of Poush Mela in Shantiniketan. Lots of tourists around and hard to find a hotel during that time.
From Bakreshwar to Bolpur (Shantiniketan) via Siuri, we took SH 7 only that will lead to Bolpur straight via Siuri, Sattore, Lohanagar, and Shantiniketan. This is the shortest route and will avoid entering Bolpur, makes a direct entry to Shantiniketan (distance of around 55 KM). Took around 2 hr. The state highways as already mentioned are in excellent shape except few bad patches.

The way back to Kolkata from Shantiniketan is another lovely drive through NH 2B and NH 2. To catch NH 2B reach Bolpur station from Shantiniketan and from there take the route through the city to catch the NH 2B high end road. Driving in NH 2B is another experience because of its natural beauty. Although 2-lane, but the scenic beauty of this road is even better than NH2. Driving straight through NH 2B via Bhedia, Guskhara Baghar gram connects to Burdwan NH 2 (a distance of around 60 KM), take a right turn from Burdwan to catch NH 2(Durgapur Expressway). Another 106 KM and you will reach Kolkata. 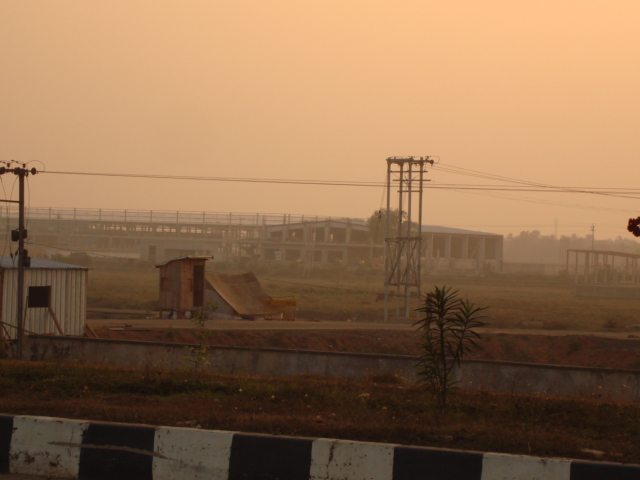 While entering Kolkata you need to be a bit careful to take the correct route, otherwise you might end up catching the Howrah-Bali GT road. The correct way to enter is follow the directions and switch over to NH 6 from NH 2 (that is catch the Bombay road towards the direction of Kolaghat) and take a left turn for Vidyasagar Setu and enter Kolkata. Another caution here is to take the correct left turn; otherwise, you might end up entering to Bankra (a place in Kolkata) and have to make a way back. Ask people in case of confusion, otherwise there may be a bit of a trouble.
One can search his appropriated road by putting his criteria in Google maps.

Toll Taxes:
On way through Durgapur Expressway, there will be very few toll plazas. The first one would be meager 10 Rs of Vidyasagar Setu and then 3-4 toll plazas with toll taxes ranging from 25-70 rs. Always keep the toll receipts with you, because quite often, you do not need to pay the taxes while making an exit and the existing receipts will prove that you have already paid an entry tax. There might be few small toll taxes to be paid for state highways too. Overall not many as compared to NH 8 (as I mentioned in one of my other articles in ghumakkar.com)
Overall experience: excellent
Distance covered: approximately 550 KM