The last three words above, taken from the great song written by Mazrooh Sultanpuri, always ring a bell in the ears of all of the travellers around the world. Those three words have the ingredients of the drive that always motivate a traveller into taking the first step towards his journey. It happens with all of us. After days of hectic parleys into the so-called work-life, one fine day we decide to pack our bags, don our boots and depart in search of happiness in the folds of the horizon that opens up before our eyes. On many occasions, when that bug of travelling caught me, I started off with my family. But, at times, when the feet started itching with the overwhelming tune of “दीवाने कही चल….”, I had also found myself alone.

I was staying at the Jabalpur Sports Club. It was a newly constructed mid-range hotel owned by a construction baron. The Bargi Dam was approximately 30 kilometers from there. I had been informed by my Indore friend about the mesmerizing view of sunset at the dam. I had also read about the possibility of hot air balloon rides there. So, with the idea of spending another evening of adventure and of romance with the nature at the lap of River Narmada, I proceeded towards Bargi Dam.

For a few kilometers, we were on the Jabalpur-Mandla highway towards Mandla. Then, branched off to our right and proceeded on the Rani Durgawati Samadhi road. Crossed the Samadhi at Narai Nala and proceeded straight on the Bargi Dam road. It was a single pucca road curving through the plateau interspersed with the vegetation. We were greeted by vast openness and the views of herdsmen collecting their cattle for the journey back home welcomed us. 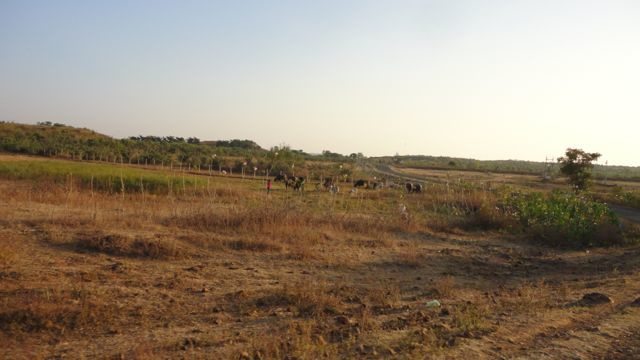 Enjoying the solace that comes from the fresh airs of the countryside, I reached at the entrance gate of the Bargi Dam Water Sports Complex. The Madhya Pradesh Tourism also runs its “Maikal Resort” there. It has about six beautiful rooms. However, due to insufficient number of the rooms at the original resort to cater to the demands of the growing tourist traffic, another building was also under construction there. The tickets for enjoying the water sports are available at the reception of the original resort building. 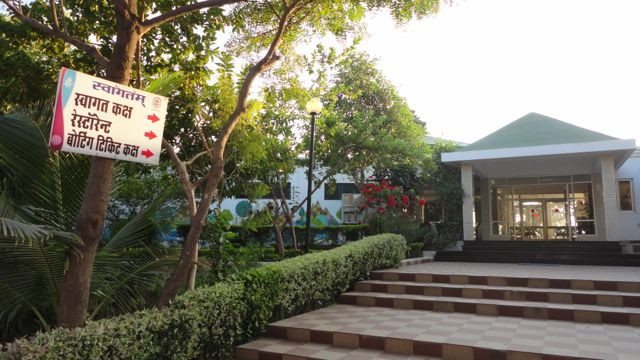 The entrance of the Maikal resort

There the news of the hot air balloon being not operational came as a bolt to me. Actually, I had gone there for that purpose. Peeved and feeling cheated. It was one of those awkward moments when I could not understand why we always fail to deliver what we promise. But there was also a positive side of having patience which had been taught and nurtured by the consistent travelling over the past many years. So, without wasting my time and energy, I took the alternatives from the available water sports facilities. There were four options, e.g., Paddle Boat, Cruise, water scooter and speed boat. Paddle boating at the Bargi Dam was completely unthinkable for an idiot like me. Standing on the floor of a cruise that floats at a moderate speed was for sissies though it gives a very good view of the sun setting on the west. With those two options out, I was left with only two options. 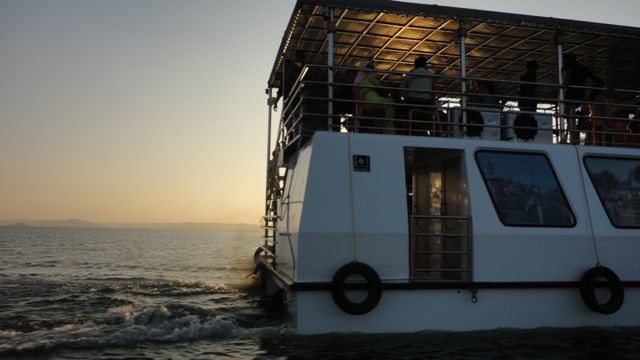 It was an assisted ride on the water-scooter, with me at pillion. Shaym, the Sikkimese driver, did not let me drive. All my please and persuasion fell on deaf ears. Once he said “no”, it meant a complete naught. When I persisted long, he just went and sat on the driver’s seat on the scooter and with demure smile indicated me to sit pillion. The message was clear, either you sit on the pillion or forget the drive. What the heck! But, what to do! Sensing no further improvements, I had no option but to sit at the back. The thrill of driving a water-scooter was gone. I was left with enjoying the thrill of speed of the scooter driven by Shaym and the thrill of being hit on the face by the rush of air coming from the vast dam. Shyam, on the other hand, was enjoying at the fullest. Sometimes, he was driving straight and sometimes he was making the circles of “8”. At times, the scooter tilted at less than 45 degrees. During those maneuvers at a very high speed, it is difficult to hold breath. But, I still hold it against Shyam for not letting me drive. Either, he would have seen something in me that prevented him to offer the reins of his beloved scooter to me, or, he wanted to enjoy himself that day at my cost. He must have got a little number of visitors that day. 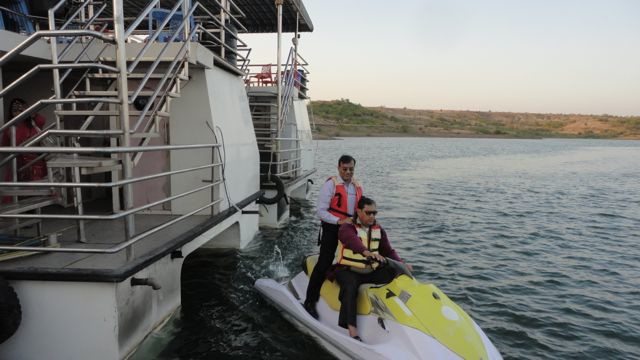 Returning from a water-scooter ride

After that ride, it was the time for the ride on the speed boat. It was a six-seater V-boat with an outward motor. Steel handles were provided for the last row of cushioned-seats so as to enable the passengers to maintain their balances at the fast speed turnings. Chhotu was the name of its pilot. He was a local. A reticent man of feeble voice, he hardly uttered any words. He took the tickets and mechanically sat on his seat. No questions, no dialogue and no interaction. Full stop. Silently observing his behaviour, I wanted to raise an important issue with the Ministry of Tourism. I wanted to write them a letter telling them the importance of development of interpersonal communication skills at the cutting edge of the tourism human resources. 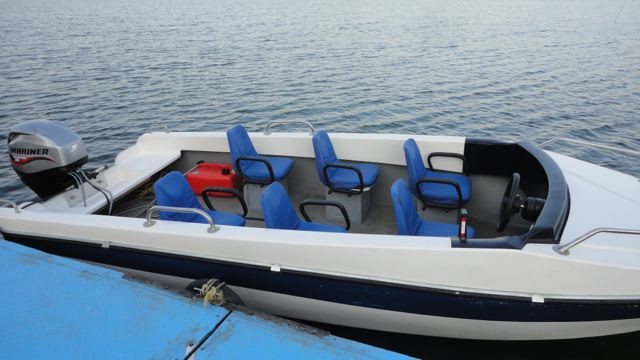 But Chhotu drove his machine like hell. I still do not know whether he was driving in anger or driving made him happy. The other plausible reason, of course, would be his pressing urge to go to the toilet after finishing off his sorties quickly. He was putting the boat into the ultimate efficiency test. The boat was flying on the waves. At number of times, it was on air for a second or so. At other times, it skidded off the waves at full speed. Chhotu was fast and furious. I had been to the drive on the speed boat at many places in the country and had experienced the speed and the thrill connected with it. But, here was the fastest pilot driving his machine like a maniac. And, he did not say a word. I also started believing whether he could listen to our shrieks or not. 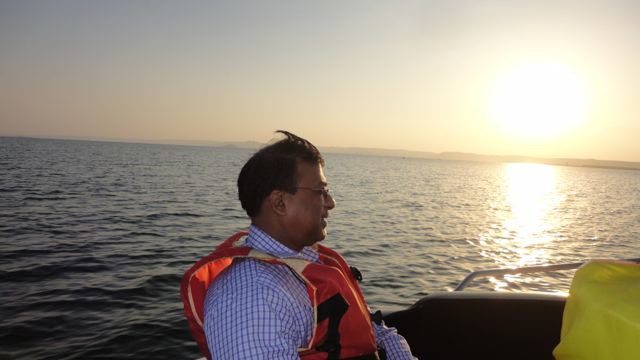 Half an hour and a few rounds of the circles on the water later, Chhotu sped his boat towards the jetty. Docked it, took the keys out of the slot and immediately sprang onto the dock. When I came out of the boat, I heard him saying “Thank you”, two evergreen words that trickled up his throat. I have yet to understand the nature of his thanks. Either it was his graceful way to thank his passengers to survive his driving that day or it was just a normal gesture from a stubborn grumpy man, who could not say anything else. Anyway, that fast drive in the speed boat was also a pleasure. What’s the fun of speed boating, if it was not dangerous? And, I was standing safe and sound on the land to start the same life once again. Thanking Chhotu in return, I returned to the Maikal Resort.

In the meantime, the cruise was doing its last journey of the day with around 50 people, mainly couples and children. The water-scooters and the speed boats were already docked. The ticket counter was closed for the day. An undescriptive calm started prevailing over the area. Sometimes, I really wonder to see the way Nature changes its role and colours during the day. It was a clear sky and the show had just begun. The sun-rays falling on the water was making a visible straight line. 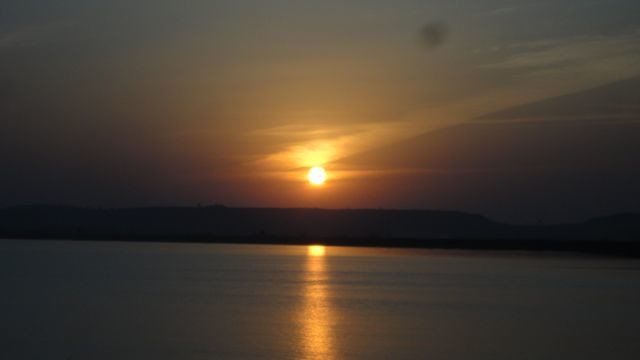 The sun set: stage I

The restaurant at the resort was very strategically placed. From the glass window of the restaurant, one can watch the greatest show of the day when the sun starts setting on the west. I also sat there and ordered some French fries. Then, while sipping the richly floured hot cappuccino, I sat down at my leisure. Once the cruise came to the banks, those 50 odd tourists thronged the restaurant and filled its hall with various shades of colours. They were laughing, giggling and talking animatedly and their children were running in between the chairs. I enjoyed with their pleasure, loved to see them happy. But, my concentration was on the dam and on the sun which was setting. It had almost gone under the horizon. 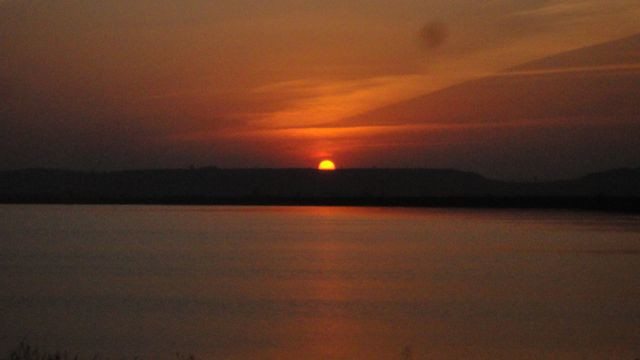 The Dam was built during 1974 to 1990 after displacing about 7000 families living in approximately 200 villages that were to submerge. What happened to those families? Did they survive or perished? What does one feel in leaving a place where the family had lived for generations? Those are certainly not easy decisions. Then, there are lobbies for development. If there is no dam, then how to provide for electricity and all? But, today I had no answers to all the questions that kept coming to my mind. The sun had gone little further down. The sky had turned deep reddish. 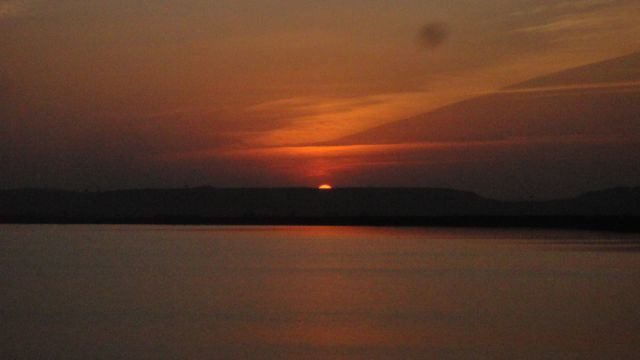 I am always fascinated with the sunsets. With all my concentration on the natural event, with my eyes fixed on the sun and fingers closed on the camera, I stood there watching silently as the sun dipped further. How lovely, it looked. In the meantime, I forgot the French fries, which got hard and rigid and the coffee also turned cold. 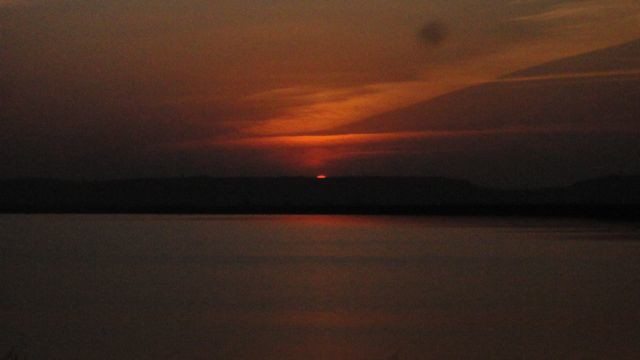 The sun had now completely gone under the hills leaving a riot of colours on the sky. The ethereal event really had moved me. In my opinion, this is the place to spend a quiet and leisurely evening with one’s beloved. If possible, one should also plan for the night stay at the Maikal Resort. At a reasonably short distance from Jabalpur, it is a very good option to spend a weekend with family. Even then, I did not want to leave the place. But, being alone, returning to Jabalpur was the best option. The couplet from famous poet, Harivansh Rai Bachchan, communicates the best expression of that time: