After a good sound sleep, we got up early around 7AM. A lovely view of the beautiful Kaza city in the morning, a lovely breakfast, couple of tea breaks, and by 9:30 AM we were ready for the day’s trip. We were about the cover the 2nd last part of the circuit, from Kaza to Manali through the much difficult to cross Rohtang top, specially because in rainy season, Rohtang pass becomes very difficult to pass because of the excessive wet mud and huge traffic. Having said that, this part is also the the most beautiful and most adventurous one.
From Kaza onwards the Lahaul valley starts, which goes up to sarchu, barcha-la, but we were not intended to go that far, but took a diversion for Rohtang Pass.
The distance just 150 KM though but it almost takes a day to cover this amazing pebbled, zig-zag and none the less dangerous road to Rohtang pass. We started around 10:30, and by half an hour reached the Rangrik/Key Monastery junction, from where the road to Rohtang pass diverges. And off the journey starts towards Losar first.
ice-rivers-joining-chandra-river-batal-to-chatru.JPG
chandra-river-what-force-reaching-chatru (2).JPG

The road to Rohtang pass is no road at all, but its pleasure to drive through it. Enroute, there are few amazing view of snow top mountain peaks with clouds hovering the top of the peaks. It looks awesome.

Beauty on way to Batal 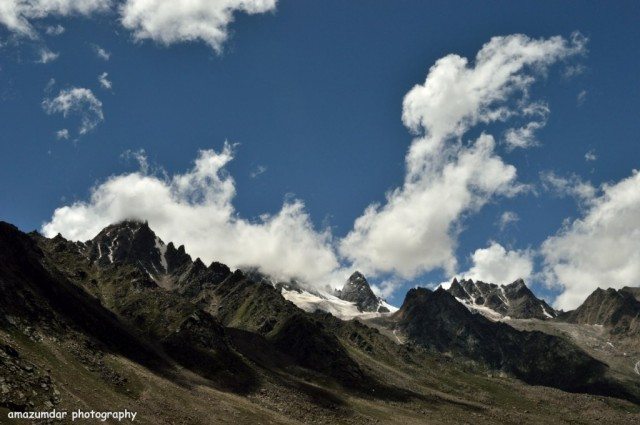 We had our first destination at Losar around 58 KM from Kaza. Lovely small village, with lots of crowd again mostly tourists. 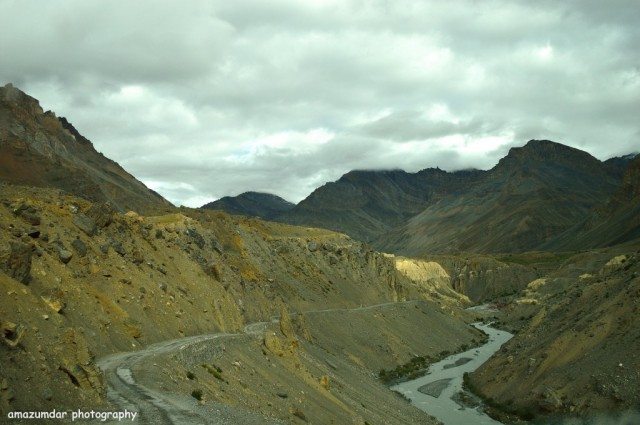 Losar can be a place to stay and place to rest after trekking from Rohtang to Kaza for a break. After Losar, there are numerous tiny small places like Rangrik, Spurik, Hal, Pogmo, Hansa and many little places with meagre population. Around 15-20 minutes break in Losar and then on towards Kunzum Pass another 19 KMs. Another 1 hour and by around 1:00PM we were nearing Kunzum Pass.

Well believe or not, the view gets more and more better in the circuit. The Kunzum pass at a height of around 15060 ft, with snow top peaks around is a treat to be at. Frankly there is nothing around the peak except a Buddhist temple, in the Kunzum range, but still without watching self, one cannot get an idea of the amazing beauty of the place. 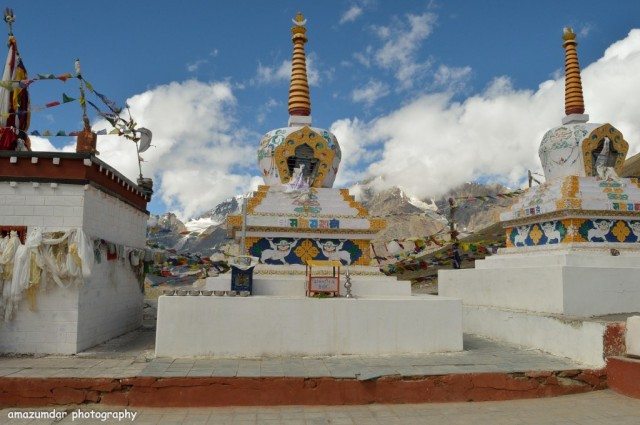 Lekhram showed us the trek for the world famous chandratal lake at a distance of around 14 KM. The only thing right now I am currently repenting for is I missed visiting chandratal because of time constraint and off course my parents will not be able to trek. But I will sure visit the lake once and soon.

Another route for chandratal lake is from Batal which we are about to reach after some time. Around 10-20 minutes break for a view there and then on for Batal. We planned for having lunch at batal around another 9KM. Just 9KM but because of the road, it took almost around 1 hour to reach there. From Kunzum onwards, Spiti river leaves us and Chandra river or the Chenab river accompanies us. It is formed after the meeting of two rivers Chandra and Bhaga at Tundi, in Lahaul. It is considered to be the largest river in terms of volume. The main reason for the name of the Chandratal Lake. 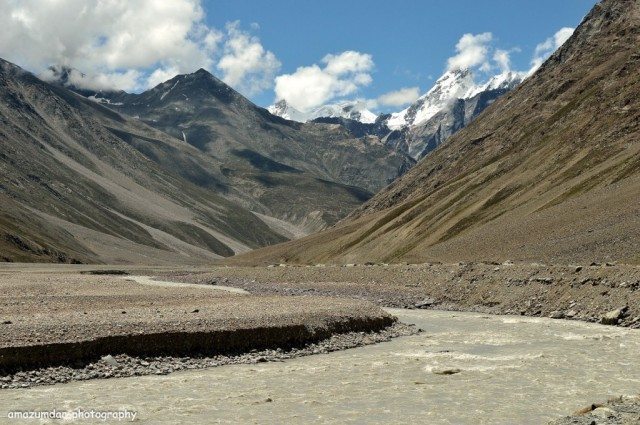 This river diverts to Sarchu and towards Leh Ladakh from Rohtang Pass. At batal also again, we halted for around 30-45 minutes, and had lunch there. There is only one Dhaba come stay in location there. Lovely view on the banks of the Chandra river.

Around 2:45 we started from Battal another 14-15 KM. It would be our tea destination. These small small places are beauty on their own. Another very lovely thing about the route are the nallahs and small small waterfalls on way. The nallahs are quite dangerous but yet adventurous to cross. 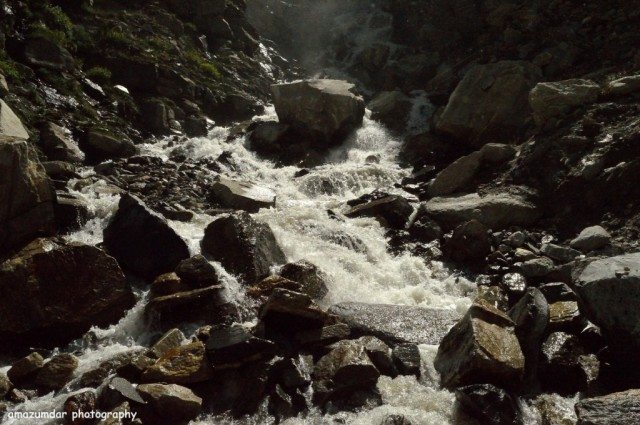 Another 1 hour and we were at Chatru. Another nice small village with a couple of Dhaba for tea and snacks. Had a cup of tea and went in for a lovely walk around the town. Had couple of lovely pics on the banks of the Chandra River.

Pics at chatru on the bank of Chandra River 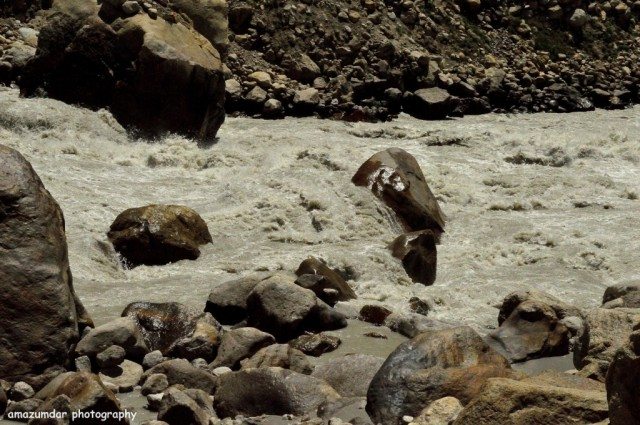 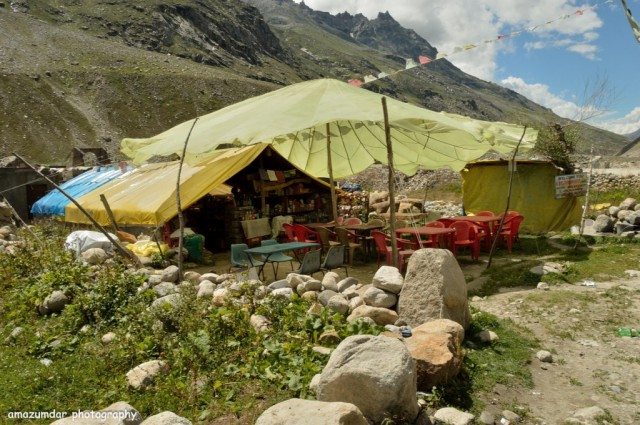 Chattru at a height of around 13000 ft, around 17 KM from Gramphu, 32 KM from Rohtang top, and we started around 4:30 from there. Next was Gramphu on way and because of the pebbled roads another 1 hour to reach Gramphu. And lots of small as well as big waterfalls. And lots of nullahs. As we approach towards Rohtang top, greenery starts to appear and the dryness starts to disappear. Lovely view of small waterfalls in distant mountains on the opposite side, makes the journey lovely. In one such waterfall, Lekhram stopped the cab and washed it, while we enjoyed the view of the waterfall, the chilled water and the amazing view.

Nice Time to Wash the car

One of the biggest Nallah

Once Gramphu is crossed, then starts the steep rise to Rohtang Pass. And oh man, the view is something one can never forget. Just before getting up, there is a route that joins the route we were into. This route is coming directly from Ladakh, the well know Leh-Manali highway. As one rise up, there may be numerous landslide clearances. And stoppages and long traffic snarls can eat up few hours. But all these clearances are very enjoyable. 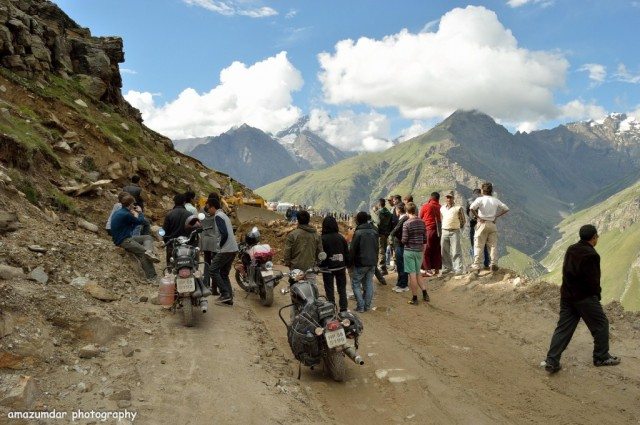 A very important thing about Rohtang pass is while on one side one can see the entire Spiti and the entire Lahaul valley, on the other side, the western part of Himachal including Manali, Kullu.
Because of the the construction of Rohtang tunnel by BRO, once you reach up the Rohtang, numerous blockages and full mudd filled road.

It was one such mud filled road, where we were stuck very badly and our cab was not moving ahead. Lots of efforts from lots of different cab drivers finally kicked us off Rohtang top after an effort of around 1 hour. Traffic was huge and it was getting dark. So we were worried a bit too, but then this was the only bad patch we had.

All the way up

Once we reached the other side of Rohtang, everything was fine again and it was dark. We halted for a tea and then another 1 hour, we reached Manali. Lekhram took us to Hotel Chandan at a lovely location in Manali, just near the Manali Monastery. And it was very cheap.

It was almost 8PM, when we reached the hotel. We had tea, washed ourselves and had our lunch by around 9:30. It was after 3-4 days, that we received back our mobile as well as internet connectivity. So we can connect to someone finally.
Leaving apart everything, this part of the journey was the most dangerous, adventurous and the best part of the journey till now.

We relished the Bajra ki roti in a traditional village way and went back to the dining hall, because the clock hit 8 PM and our time for dinner was 8.15. So when we reached in the diner hall, again we had got a warm welcome in Rajathani style “raam room sa/shethani sa”….