I marched ahead, with the rest of the group, the boys stayed on the boat to look after our belongings.

From the quay to the guest house was quite a walk and hours after being tossed aboust on the sea, walking felt good…We arrived at the Rangers office, a wooden affair. The office itself stood on stilts, the reasons for which I learnt of later. There was a coffe shop which stood on stilts and no other building as far as I could see. These two wooden structures completed the “building area”on the Rinca Island. 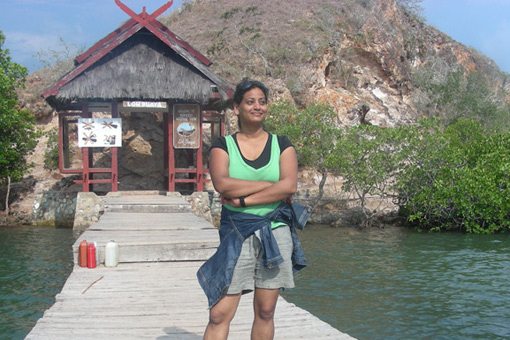 We were rquired to fill out our names in the ancient register. I put in Indian next to the name in the nationality column and the ranger who happened to be peering over my shoulder did a jig. His next question surprised me.
“You Indian?”
Yes.

“You come from India? Direct?

You not living in Europe?? Sure?

That seemed to make him happier. The Latvians and Mathais were by now very interested in the goings on.
“No Indian come here from India. One lady come from UK, Indian, but she not go to India ever.”

oh, alright”, i managed, not sure where he was getting to.

I didnt know how to react to that one. Before I could feel proud of the fact, he came up with another, completely different question. He had been looking closely at my name…he read out loud…
Anjaly…

With that everything changed. I am sure Mathias had been meaning to ask me that question too, but with difficulty that a guide faces, he refrained from asking me. Apparently he took his job very seriously. But the Ranger had, in some way, removed the last bit of guide-tourist formality and paved the way for a friendly relationship.

The Latvians, sensed that something was defnitely brewing, something exciting and threw in some friendly laughter. When we set out to the see the dragons, we had all become friends. Amanda who understood most of what was going on, shared the info with her family. Without actually speaking to each other, all of us were now bonded.

We moved ahead. The dragons waited. But I sensed that the Ranger, now bored with seeing the dragons for the last 16 years, would rather speak to me about India and SRK and learn some Hindi from me, but he held his peace. He send me off with the rest of the group, with words of caution.

I gathered that he wanted me back in one piece so that he could take up our little conversation further!

We were lucky. For the dragons were close. Before we went out deep into the islands, we saw our dragons.

Three of them. One was fast asleep under a tree and didnt move despite the noise from our group….the other put up a show for us.

“We bring them from inside,” a young man, who lead our group voluntered. “we throw pieces of meat to drag them out. some tourists cant walk much and they see dragon here…”

Fair enough. People braved the odds and came to Rinca Island to see the dragons, but few have left without actually seeing any of them.

Into the Dragons Den was last modified: November 6th, 2019 by Anjaly Thomas

My travel tales are becoming more of hotel reviews which I don’t necessarily enjoy writing, unless they’re too good and I can brag enough,…