Riding the waves in an old wooden boat on the unpredictable Indonesian sea is exciting. While I sipped coffee, the crew got busy with making lunch. This was going to be completely ‘local’ experience and for once I was glad. Mathias tried to get the Latvian family interested with infomration on local culture and stories of Manggarai families, but I noticed he didnt have many takers. From snatches of his mostly one-sided conversation accompanied by excited gestures, I understood that LBJ, on the West Manggarai regency of Flores was an extremely beautiful place, with many spectacular sights and adventurous trails. Mathias told us that Denpasar (Bali) as as far as his knowldge went, for he had never set foot on central Jawa (read Jakarta)_ he didnt regret it of course, Labuan Bajo was the most beautiful place on earth, he said. Looking at the small green islands we passed by, I was inclined to agree with him.

Our thoughts rested on what was waiting for us at Rinca Island, our stop for the night and our first meeting with the dragons. All of us had braved the odds so that we could get up close with the Komodos and Mathias was quite excited over the prospect of seeing the dragons again. 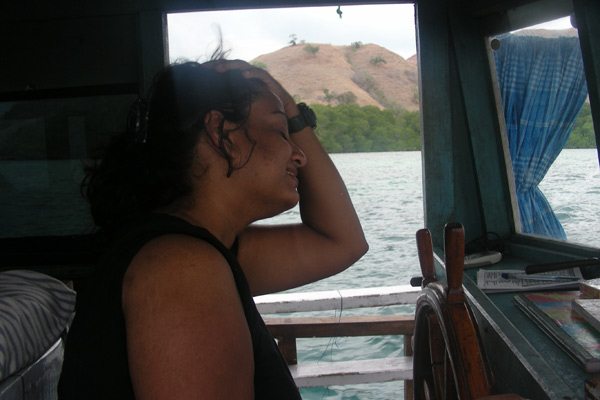 Few nautical miles into the sea, lunch was served. Mathais hovered around the table, “waiting” on us…helping us with the spread! The ‘spread’ included rice (I thought it need some cooking), vegetable soup (carrots, cabbage, potatoes and beans boiled in water and NOT flavoured), noodles and fish topped with ripe tomatoes. All of us did enjoy the meal, I guess it has something to do with the the sea breeze or the sun or simply the beauty of Indoesia but we polished off the last grain. This meal was followed by some more coffee. I wasnt sure if so much coffee was good, especially since it was hot, but I downed a good measure anyway! Post lunch, my fellow- mates decided to nap, while I allowed myself the lucury of motoring the boat. There was no ‘traffic’ so to speak and other than the whirlpools, there was nothing much to worry about. The crew were only glad to let me try…anything to break the monotony of the sea they were used to. One member of the crew kept an eye for the whirlpools, while the ‘captain’ helped me steer his boat along! Mind, the boat is NOT equipped with modern electrobic gadgets that display the location and time and such, these boats were motored instinctively. I suppose this comes with years of practice, the crew instinctively knew when we left the course. It was beyond me, but I managed to interest the Latvian family who suddenly decided that watching a fellow traveler captaining a boat was far more interesting than a shut eye!

On Board was last modified: November 5th, 2019 by Anjaly Thomas