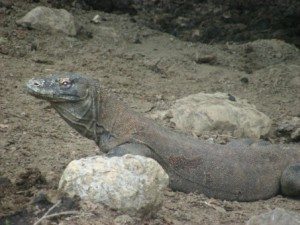 Few instances can match the excitement of seeing the famed Komodo Dragons right in front of your eyes. The giant lizards with their snake-like tongue dripping with poisonous, bacteria infected saliva, though not pretty to look at, were definitely awe-inspiring. My small group of Latvians and I went click, click, and click…and the dragons, probably used to these alien sounds, didnt mind too much. Instead, with the swish of their long tail, made their way into the forest, lost to sight. Our guide was excited. We werent. We hadnt had enough of the dragons….I kept my camera rolling, hoping to catch any movement, anything.

The dragon chased me only after the pic!

The guide egged us on, telling us we would surely see more of them near the watering hole! Surely he wasnt lying, but the watering hole can be reached only after marching in a single file, long and hard, through brushes, skipping over rocks, sweating under the blue sky visible through the huge palm trees dotting the landscape.

But I held on. Maybe, maybe the ferocious dragon that I had focused my attention on, would appear…in another minute…maybe…and voila, it did. He (I am assuming it to be a male), turned his beautiful head in my direction. Even looking through the video screen, I was mesmerized. He seemed close…I stepped back a little, only to remember that I had zoomed in…!

He held his head in place…staring into the camera, then rolled out his long, snake-like tongue….

Only later when I saw the pictures Peteris had shot of me filming the dragon, did I realise that I hadnt been too far away from the lizard. He could have had me in one stride! We walked in a single file, led by a ranger carrying a long, sturdy, Y shaped stick. This, he explained, was to stop any dragon if they decided to attack….they Y end of the stick would lock their front lgs (same as how they use a similar stick to capture snakes), while we could make our escape.

This was my first trip to a place which lies beyond the claws of the tourism departments. And believe you me, it has been…