What could be the meaning of the title of this post Hundred in Gangtok ?

This is about visiting Gangtok, the capital of Sikkim, in a group of around 100 persons one year back in May 2011. It was an office group trip with families included. In the organization where I work we didn’t have a group tour since very long time and everybody was feeling a need for the same. Finally in March 2011, management has decided to go ahead with the trip. As usual in business, we divided the various activities required to plan and organize the trip into various internal teams. I was the center point to have coordination between teams.

Now the first task was to select a place for the trip. As the tour has to be done in summers, it has to be hills. We have our head office in Noida where I work and as you know there are so many hill stations in Uttarakhand and Himachal Pradesh. But we have our branch offices in Assam as well so we thought that the place should be somewhere in between to save the time spent in journey for both Noida and Assam teams. So two options came Darjeeling and Gangtok. After discussing the pros and cons of both places finally we selected Gangtok. There were two reasons – first was the neat and clean factor attached to Gangtok and secondly at that time there were so many road blocks happening in Darjeeling due to the Gorkhaland issue. After place selection, we made list of all employees and their family members for the tour. Around 65 persons have to travel from Noida to Gangtok and around 35 from Guwahati to Gangtok.  Our preferred mode of travel was train and the nearest station for Gangtok was New Jalpaiguri near Silliguri  in West Bengal. We have to spend three nights in Gangtok and proposed itinerary was as follows –

We start looking for trains from Delhi to New Jalpaiguri, the preferred train was Guwahati Rajdhani express due to least time taken in comparison of other trains.  The journey has to be done two months later but there were no seats available on the train. We anyhow booked around 35-40 tickets in RAC/WL in hope of confirmation at a later stage. At the same time Assam team has also booked their tickets and from there confirmed seats were available. We hired Travelmasti for the hotel arrangements in Gangtok as we have to book around 35 rooms with double/triple sharing. So now we were all set to go but one doubt was always there – what would happen if our tickets did not get confirmed? We start looking for alternative options. The first option was flight but the ticket price was way out of our budget. Second option was to change the trip destination but we did not wanted to repeat the whole process again. The third option was to look for a train coach booking in train to which we agreed upon.

We found some connection in Railway office and after some visit to their Baroda House office near India Gate we got the approval for special coach addition in prestigious Rajdhani Express. The coach was costing us around 3 Lakh which was around 30% higher than the usual ticket price for the same number of persons. As I was involved in coach booking process, now I know the other costs which I can share separately if required by anyone. Finally the coach was booked and that too in my name. One interesting thing to tell here is that they accept the price in cash only and the whole process is manual on papers only. I wonder how they manage all this. The cash has to be deposited in a normal but dedicated ticket counter at New Delhi railway station. Now there was one last issue. Rajdhani trains have meals included in the fare, but to our surprise we came to know that we have only booked the coach. Meals are not included in the Extra (as they call it) coach . Then somehow I managed to get the contact details of the catering agency responsible to provide meals on the train. They were ready to provide the meals to us as per Rajdhani standards but with full money in advance at Rs. 800 per person for both sides, in cash and without any receipt. We were having no other option but to simply agree with them and obey their instructions :).

So finally after all this enough and more than enough planning it was 12 May after waiting for 2 months. Excitement was on high level. We have to reach New Delhi station by our own arrangements. I live in Vasundhara, and all the colleagues living in nearby areas around Vaishali and Indirapuram decided to go jointly to the station to save cost. We were around 12 so booked two Taveras for taking us to the station. My wife Urja and son Ojas were also with me on the trip. The train was to depart at 2:00 pm so we start for the station around 12:00 noon. It was very hot outside due to peak summer time. We reached station well in time around 1:00 pm. Everybody was already advised to assemble at the platform from which the train was to depart. When we reached at the platform already some persons were waiting there. By 1:20 everybody was there at the platform as we did an attendance check and we were eagerly waiting for the train to arrive. Around 1:30 we see the train coming, normally we look for the coach number while boarding  a train but at this time it was all different. We were not knowing our coach number as it was a special coach. Everybody was looking carefully at the coaches as the train was passing by in slow speed. And as soon as we saw a coach named ‘EXTRA’ , everybody shouted extra – extra – extra. We picked our belongings and rush towards our coach. After entering in the coach we found the air conditioner running at full capacity and we felt almost like in Gangtok already. Everybody has taken the seats according to already decided seating plan. In my compartment we were three couples with one kid in each family. 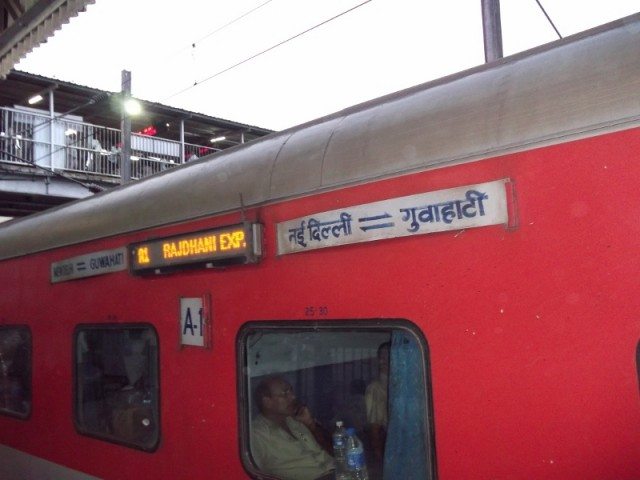 At sharp 2:00 the train started its journey at the right time. The mood inside the coach was like we were in some party. There were different activities happening in different compartments – people were playing cards, watching movies on laptops, senior persons were talking about politics and nation. In one compartment somebody had brought medium size speakers and songs were playing at full speed. It was full masti. But along with all this in my mind I was having one doubt – Food. I knew that we don’t have any proof of receipt of giving cash so various negative thoughts were there. Around 2:30 I received a call on my mobile, and on the other side was the person from the catering agency. He welcomed us on the journey as told me that the water bottles and meals will be provided very soon to us. There was a big sign of relief. Just after his call the Pantry Manager on the train come to meet us and confirmed to serve us during the journey in the best possible manner. Just 5 minutes back we were having doubts about food, but now we were feeling like a prestigious customer in a hotel. I keep receiving the calls from the caterer at every 3-4 hours about food quality and delivery timings. 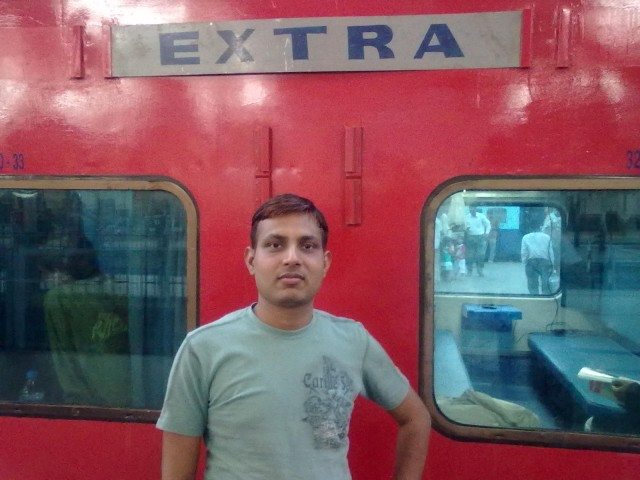 Me in front of our Extra coach

We are having our branch offices in parts of UP and Bihar as well so accordingly someone has to board the train at Kanpur, someone at Allahabad and some at Patna at 2:00 am in the night. We had a great dance party in the coach till midnight and went to sleep thereafter. We awake in the morning of 13th May and as soon as the train entered West Bengal we check the news on our mobiles of clean sweeping by Mamta Banarjee in the assembly polls. 13th May was the vote counting day, we were having a few people from Bengal in our coach and full discussion was happening on this news. The train arrived around 12.00 noon at New Jalpaiguri, it was one hour delayed. We deboarded the train and I along with one colleague rush towards the station master to get his signature and stamp on the papers we had for the coach as per the rules.  Suddenly I heard that somebody was calling my nickname, I turned back and was surprised to see my Mama ji (Mother’s brother) standing behind me. He is in BSF and was posted at Bagdogra near Silliguri at that time. He was catching the train to Delhi from New Jalpaiguri to go his home. We had a very brief chat for 5 minutes as I knew people were waiting for me at the station to start our journey for Gangtok. It was a great coincidence. We got call from our Assam team that their train, Rajdhani from Guwahati, is on time and will reach around 1:00 pm. 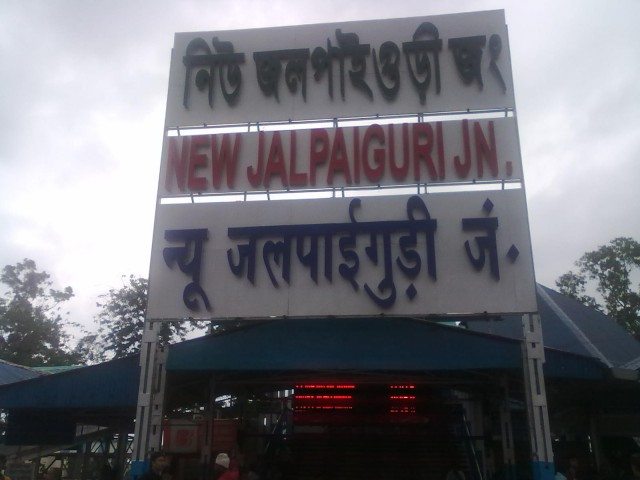 We were being told by our tour manager from Travelmasti that buses are waiting for us outside the station to take us to Gangtok. We move outside station and 3 buses and 1 Tata Sumo were waiting for us. All families and girls were being seated in one bus and two buses were left for single young males so that they could have uninterrupted enjoyment during the bus journey. Assam team was also there in next 15 minutes and we were all set to start for Gangtok.

I have talked about my love for winters quite a lot. And it is no secret that I hate summers. But this post isn’t about how bad summers are. No, sir! It is in fact about the little blessings of summers, and when I think about it, it wasn’t so difficult to come up with the list. I only had to ask myself “what is it about summers that I don’t detest?”, and the answers poured like a soothing monsoon upon the sun-dried earth.