We travelled to Gir forest in Jan 2014,this year.We had made Somnath our base and started for Gir forest from there after lunch at 1PM.Gir is at a distance of 46kms from Somnath and it requires over an hour’s drive to reach there via road from Somnath.There are 3 safaris which are arranged in Gir forest in the entire day, which are 6-9AM,9-12PM and 3-6PM.Only 30-40 vehicles are allowed to enter the sanctuary in each slot.So you need to be really early to get your permit for one of the safaris.We were lucky to get the 3-6PM slot as we had somebody standing in the queue on our behalf and so could get the tickets quickly.The office opened sharp at 2.30PM after lunch and then there was a role call to inform who were the lucky ones who could go in the safari.Before that we were asked to fill up some forms as formality.The tickets costed us 3000 bugs(2400 for 4 person and 600 for taking 2 cameras with us).

We started our “Jeep Safari” at 3PM with our local guide.Each vehicle is allowed inside the sanctuary with a local guide who has rich knowledge about the habitants of the jungle.Our guide turned out to be very talkative and a rich source of info.We not only asked him about the king and his mannerisms but also about what other wildlife were seen in the forest.The guide got very excited to this and said “yaha pe to jo bhi ata hai,woh sirf lion dekhne ate hai..main bahot khush hu ke aap dusre janwaro ke bare me bhi pooch rehe hai”..with that we began our journey.There are 8 connecting routes in the sanctuary and each vehicle is dedicated to a specific route to go inside.No vehicle is allowed to run around haphazardly but have to follow a specific route.The guide told us that Lion sightings are very rare and is mostly during the summer months,when they come out to drink water from the streams and water holes.The sanctuary remains closed for 4 months during monsoons.In winter the chances of lion sightings decrease further.As we were visiting the forest in Jan,we were apprehensive whether we would be able to see the king in his terrain!! 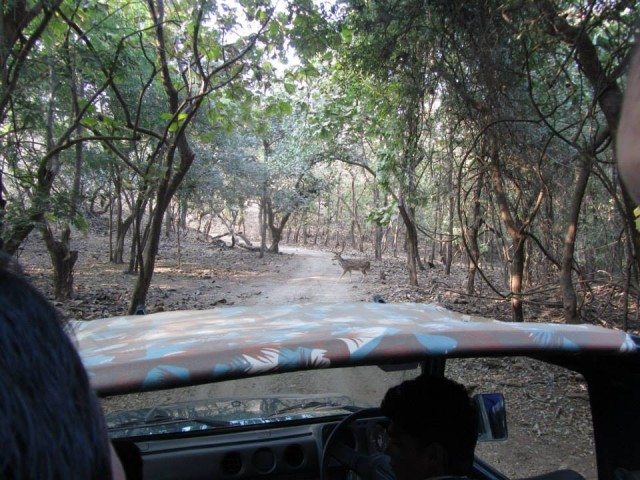 The guide went on..There are specific rules to be adhered to in the forest area. Rule No 1)Nobody will get down from the jeep at any point of time to pick up anything left behind.Rule no 2)If suppose we are in Route no 1 and lion sighting happens in Route No2, we are not allowed to change our current route and go towards Route No2..At any point of time, we need to follow the same route, we started off.Rule no 3)Don’t make loud noises,talk in low voice as we don’t want to disturb the wild animals.

We moved forward.Suddenly a deer came out of nowhere and started to cross our path.On seeing us it started to make noise, similar to a dog’s bark.The guide said “he is trying to alert his group members of possible danger”..

We had barely moved few kms,when we could spot a forest guard jeep nearby.The guide told us that each male lion has a territory marked comprising of 30-40kms and its very rare to spot a male lion as he is always on the move,though its easier to spot lionesses.The presence of the forest jeep, suggests there is a male lion who is either sick or resting nearby.At first when we heard this, we couldn’t believe our ears,later it turned to excitement,the excitement to spot the “King of Jungle”.We waited for nearly 20-25mins before the forest guard allowed 1 vehicle each to see a resting lion from close quarters!!Oh what a sight it was!!The king was having his royal sleep by resting on his back,legs wide open and oblivious to the commotion of tourists nearby.The lion it seems rests for 18-20hrs in a day and hardly attacks humans unless provoked. 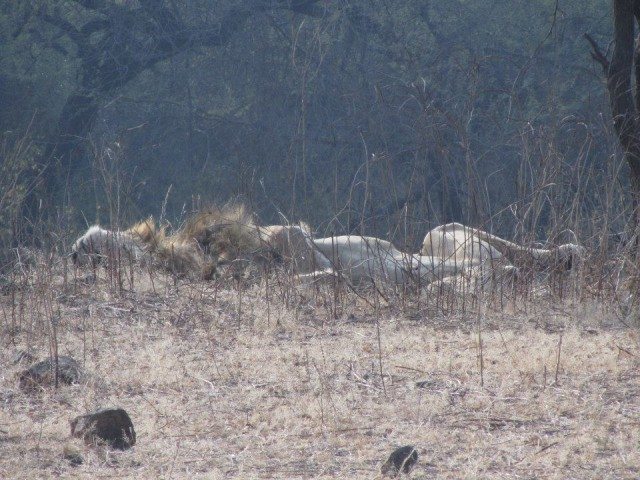 The king having his “Royal Sleep” 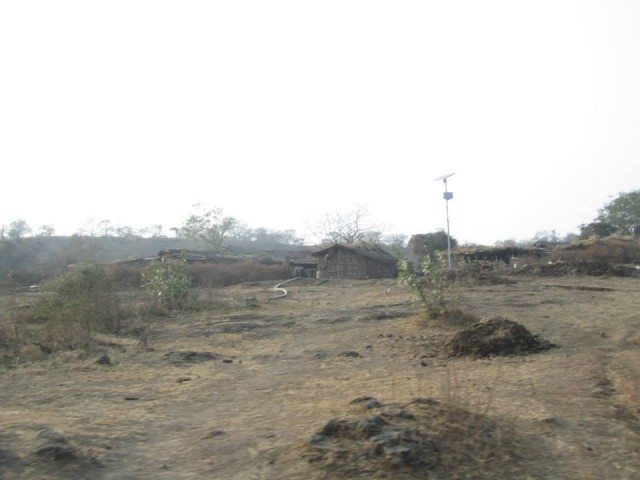 Village of Maldharis,cohabitants of Gir forest 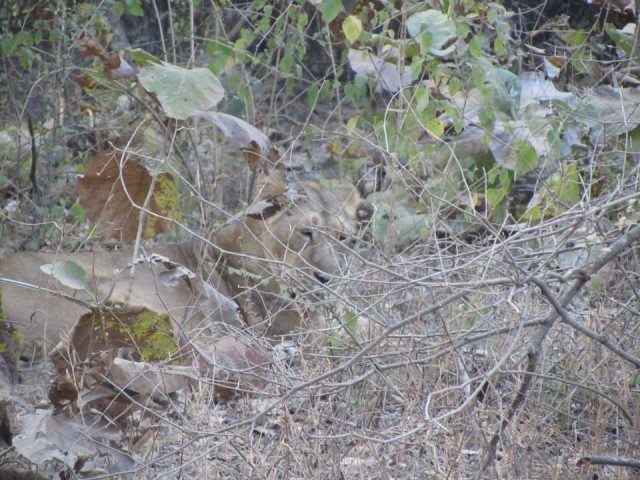 A lioness camouflaged behind a bush

We moved on,started thinking that success came to us early as we could spot the king so easily,there are numerous stories doing the rounds that people have stayed in Gir for 2-3days just to spot the King and have not been successful.We were unaware of the fact that destiny had some other plans for us… 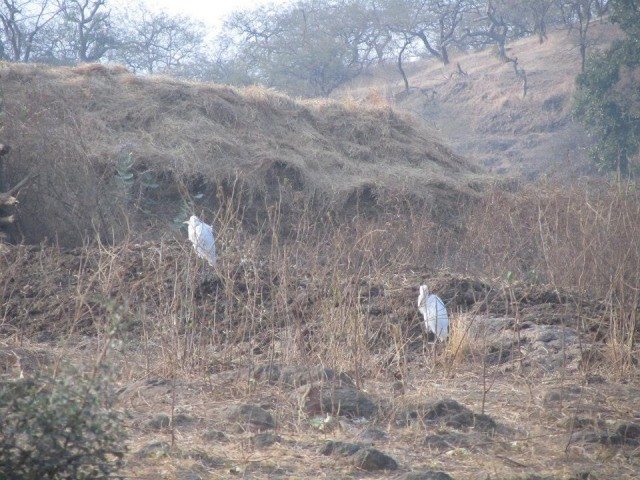 We went past the village of the “Maldharis”, the local villagers cohabiting inside the forest area with the lions and other animals.The guide told us that unlike us,the Maldharis dont require a permit to go inside the forest and have monthly passes to travel back and forth inside the forest to get their monthly food rations.We were left speechless to see how Man and Animal were cohabiting together without any sort of conflict in the lap of nature.We also spotted few Egret birds near to their hutments.

We spotted the Gumtree at couple of places.The Gumtree is a magnificient big tree with white body,grows extensively in Gir and is known as the “Ghost of Gir” as its white bark glistens at night, gives somebody the feeling that a huge ghost in standing in the dark.

A Gumtree in its full glory

All this while we were roaming in the dry forest.The flora in Sasan Gir National Park chiefly comprises of Tropical dry deciduous forests dominated by short and gnarled teak trees, Thorn scrublands, Rolling grasslands and Semi-evergreen riverine.There are over 450 plant species here.Major trees found in Sasan Gir National Park include the Teak and Banyan trees. Being a Mixed dry deciduous forest, the main species of trees found here include Jambu, Karanj, Umro, Vad, Kalam, Charal, Sirus and Amli. Most of these trees are broad leaved and evergreen, giving the Park a cool shade and the much required moisture content.

We continued on our dusty journey, the dust had started to settle on our hair,skin etc and we joked with each other that it would be quite a task to get rid of this dust once we go back.The guide joked that he has never had any major illness in his life as he eats kilos of dust everyday and that we would  go back home with a lighter complexion as dust is good for skin, acts as a natural cleanser.

Suddenly we saw jeeps carrying lots of excited tourists coming from the opposite direction and some of them showed us the victory sign.They said they have spotted few lioness and cubs enroute..For us the excitement started building up for the second time and we moved ahead with bated breath.We had moved another kilometer or so and what we saw next, melted our hearts!!A lion cub was sitting few inches away from our jeep,it seemed as if he wanted to pose for us..he was joined by another cub and soon the two of them started playing together.In distance their mothers, two lionesses,sat watching.The guide went on..”Spotting of cubs is an extremely rare affair as their mothers are fiercely protective and don’t allow them to venture outside of deep forest area,so you people are really lucky”.We tried to soak in the happy moment and thanked our luck again and again for the wonderful lion sightings we had that day,which made our visit to the sanctuary worth it. 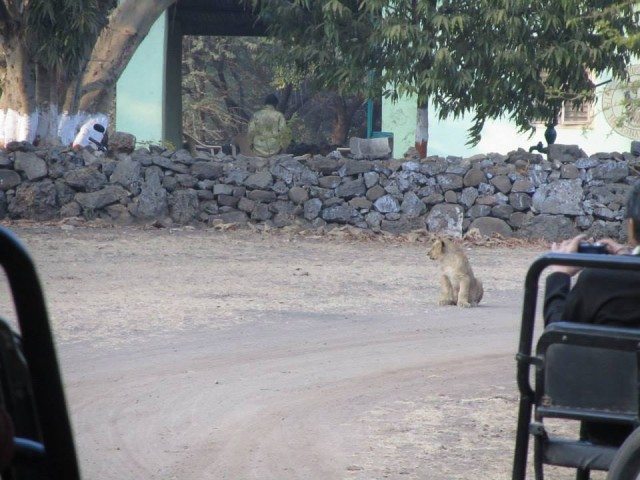 A cub posing for the shutterbugs 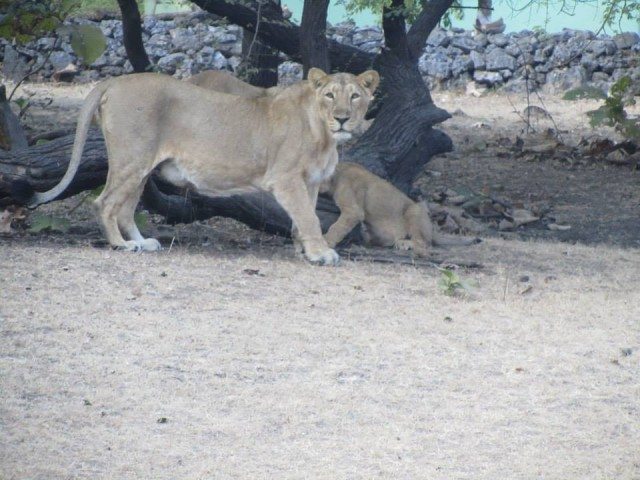 Lioness and cubs in playful mood

We soon started our return journey,enroute spotted many “Spotted Deers” with their groups and family.We particularly stopped to take pics of a cute “Deer family”..finally we ended our journey on a positive note with lot of fond memories. 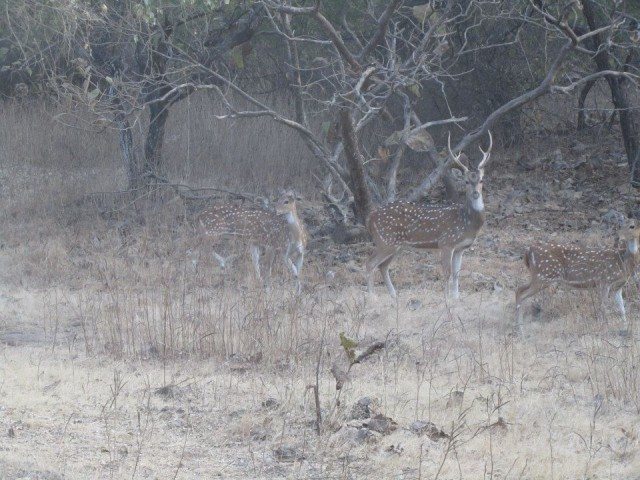 Wish we visit Gir again in near future.

Home of Asiatic Lions..Gir forest – A tryst with the King was last modified: September 30th, 2021 by Paulami

Three words that summarize me - an avid reader, seeker of new experiences and a traveler by heart. Whenever I get tired from the rigmarole of life and get some free time in hand, I try to travel to new places with my family and friends and look for known/unknown stories of that particular place. With Ghumakkar, I look forward to share my travel experiences with everyone who loves to travel.