DAY 1
Beaches attract me big time. I along with some of my rider friends planned this trip in the month of August. Actually, there was a holiday clubbed with Saturday and Sunday in the second week of August. So we got three days, I planned to take one more leave which will make it four days for the whole trip. We had planned this konkan trip long ago but due to one reason or the other it never materialized. But this time we made it sure to meet the road God !!

From Pune, it is about 180 Km’s and there was also a plan to visit the raigad fort on the way back. So in total this would make a journey of around 500 Km’s approximately!!

When we planned, we were six guys but at the day before the decided start date, four of them quit due to some office issues. So it was basically me and my college mate Harshad More. I then thought it would not be a good idea to go ahead with the trip but Harshad was adamant about the plan. He wanted us to go for it and promised that it would in turn be a memorable one. I succumbed to his sheer plans and we then decided to make it. By the mean time, he gathered all relevant places and routes connecting them. We then finally decided to take the ghat roads instead of the Highway as it was some shortcut and we would be getting more of the scenic beauty of the beautiful green coastal areas. Also, I decided that we would be taking my bike, Yamaha FZ 16 as I really wanted to burn some rubber with my new bike !

So everything was set for the journey. I packed my bag with my camera, some clothes, slippers and cash ! 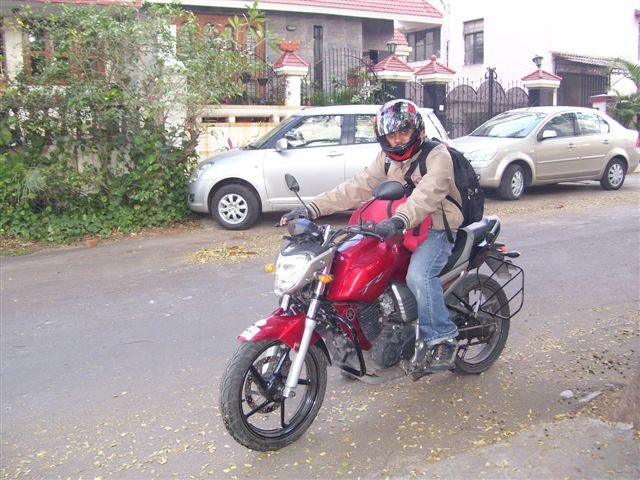 We met at Chandni Chowk, Pune at morning 7 AM, had break fast. Dear All, here I introduce you, my dear friend Harshad More, a born rider who is so crazy that one day he decides to go to office from home in the morning but end up being in Goa in the night, riding all these distance by his bike from Pune !! 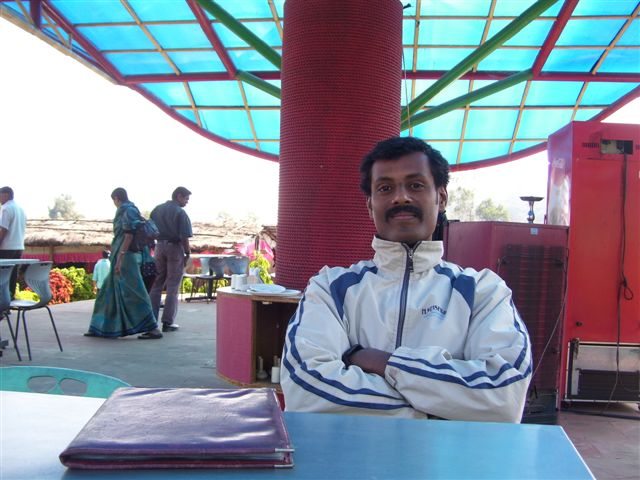 He then showed me the maps and routes we gonna take. We had only these two maps with us at the onset of the journey. 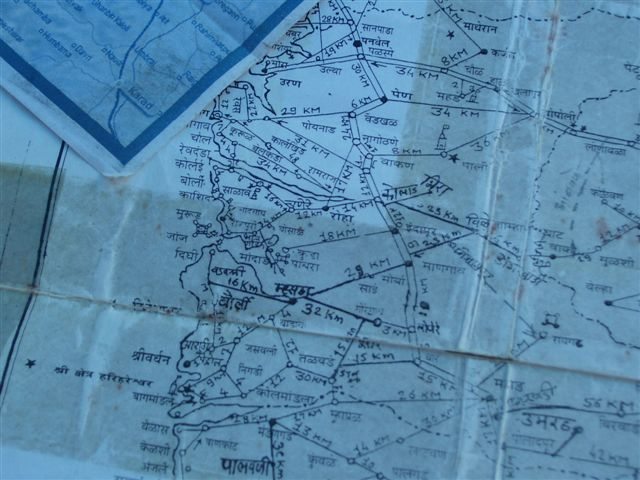 After having breakfast, we started on my bike and covered  some distance about 60 Km’s from Chandni Chowk, where we discovered that my rear tyre was flat. It being a tubeless tyre, we could afford to take it to the nearest (one and only) puncture repair shop. I was like, such a bad thing to start for a long journey.

Still Harshad was so excited and continued to carry on with his stupid jokes being cheerful to what has happened.
Found out the main culprit.

After getting the tyre patched, we resumed the journey. There were these beautiful sceneries; basically the place is famous as Mulshi, a lake resting in the lap of hills. 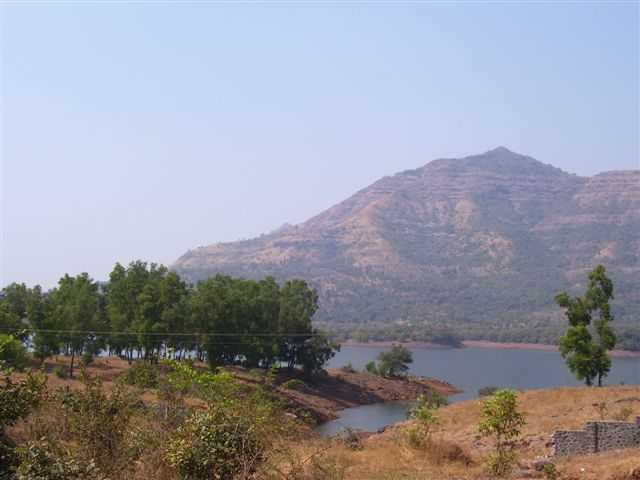 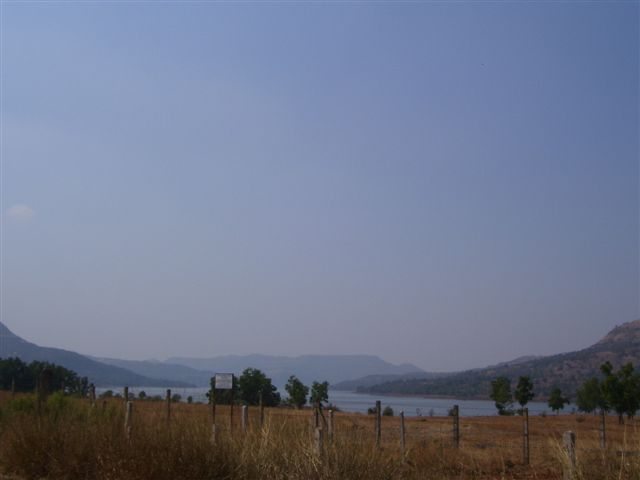 But only for another 15 minutes, we could ride as my rear tyre was leaking and flat. Later I discovered, that all this happened because of an improper thick patch which was put when I repaired a puncture some days back on my way to office. It gradually got thicker and thicker and finally tore out. So guys, here’s a piece of advice for all those who own a vehicle with tubeless tyres.. “Never repair your punctured tyres at a road side small shop. Get it sorted out from a good vendor else there are chances that the rubber may tear out !!”

Finally after much hassle, we decided we would go back to pune, park my vehicle in Harshad’s home, and complete our trip by his bike. At that point of time, I also thought for once that it would be a bad idea to continue with the journey as it was already 12 and we were no where for the beginning of our trip. But I had to stop thinking as my friend was adamant of completing the trip at any cost. So we didn’t waste any time further and decided to look out for a trolley auto so that my bike can be carried back to pune. But after waiting for half an hour, we did not manage any carriage for my bike. So what could we do at that point of time, Harshad’s riding skills needed a test !! I got a loaded auto, however he agreed to carry me and not the bike. So I was happy to sit with the driver with my baggage.

It was really a risky affair to ride all the way to chandni chowk around 60 Km’s by a flat tyre by sitting on the petrol tank and he did that gracefully. 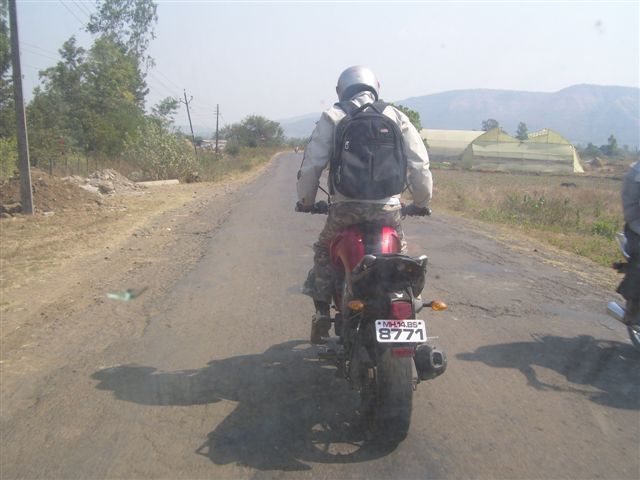 He is such a freak head. Was overtaking all heavy vehicles even with that flat tyre and sitting on the tank. 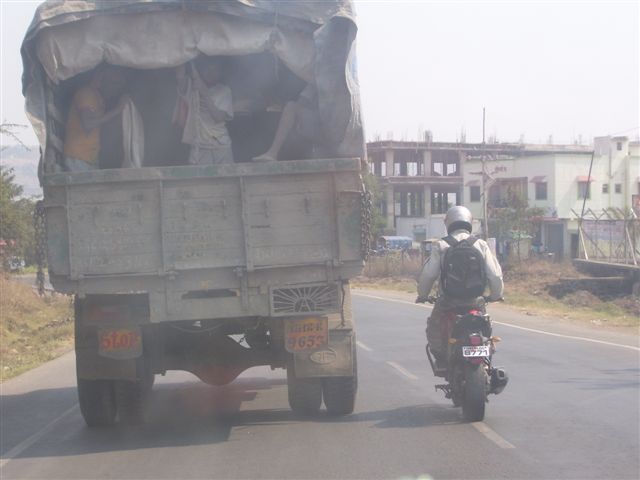 This gentlemen deserved a hug as he dropped me to my destination without unloading the stuffs he carried. Truly appreciated his kindness and he happily posed for a click when I asked for !! 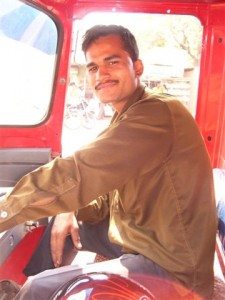 Here comes the second part. Bike no. 2. This is Harshad’s dhanno.. Hero Honda CBZ. We had a light lunch without wasting any time, we took the road. It was already noon and the heat was intense ! 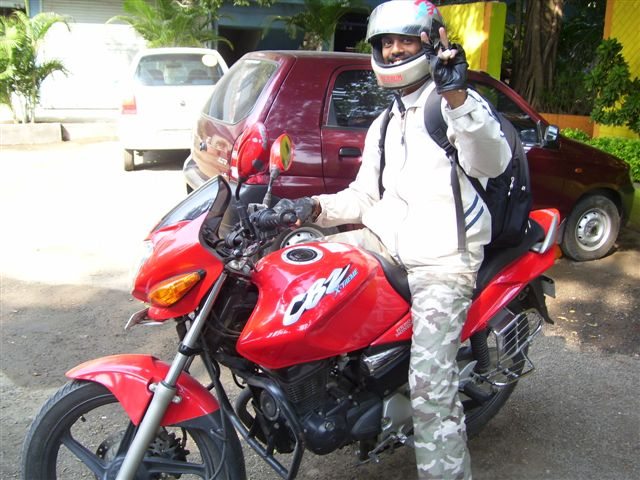 We continued to ride without any further stop. This time I was pillion and I managed to click some pictures without stopping. The roads between the villages were not so good but the places were so green and beautiful. I would like to post few pictures here. 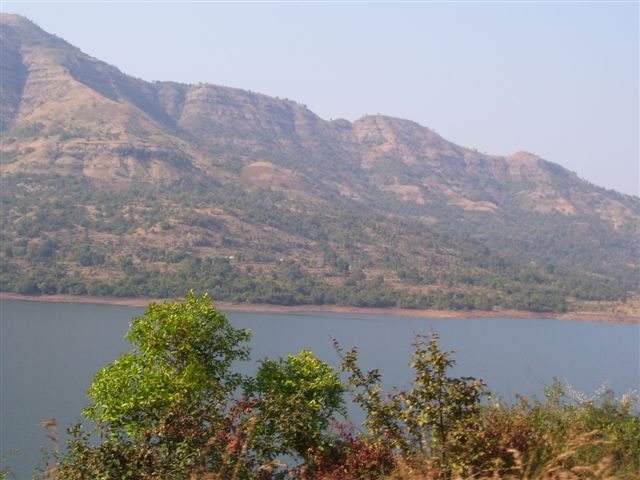 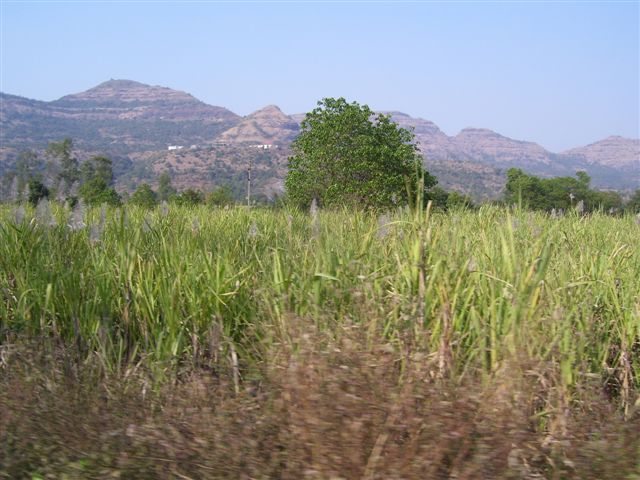 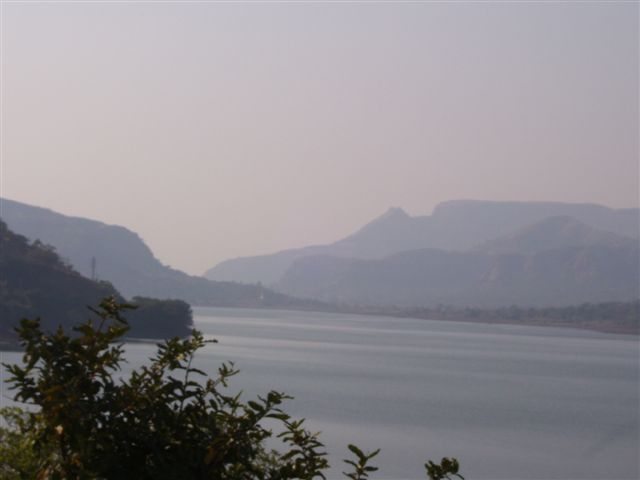 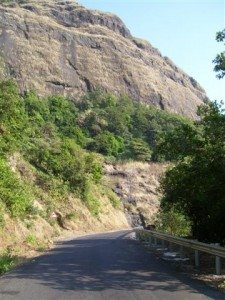 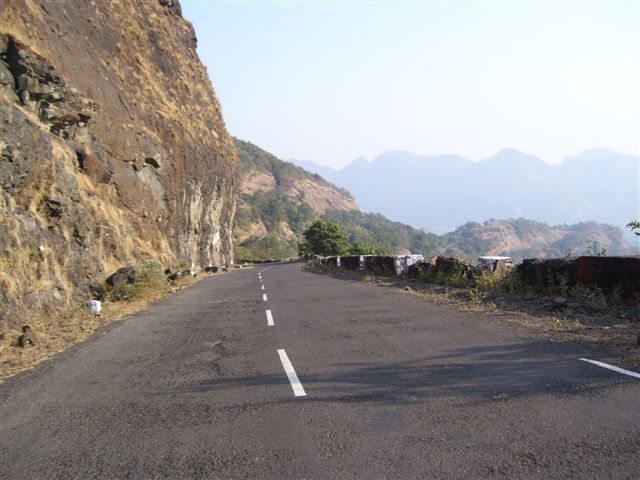 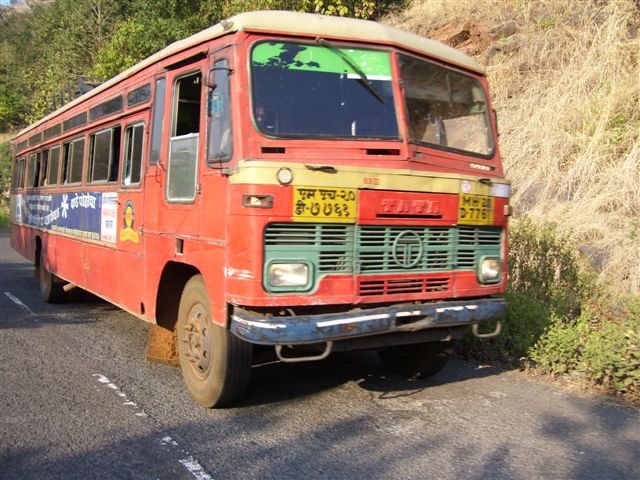 After 3 hours of continuous riding, we decided to take a small break to have some water and cutting chai ! There we got to see this sign board and was happy to know that our destination is now not that far. 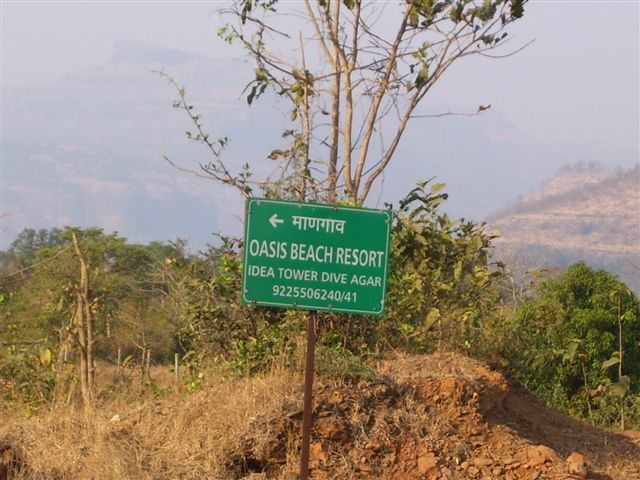 Tried to click an album profile pic with this 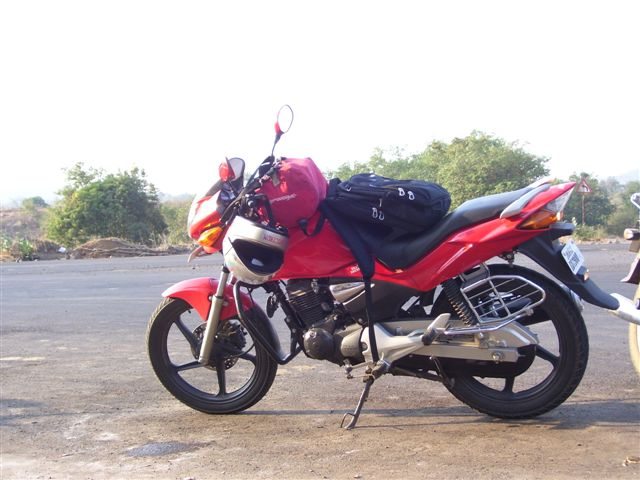 Again after riding for another hour, we found that the Sun god was setting down J Could not miss this occasion of clicking him. 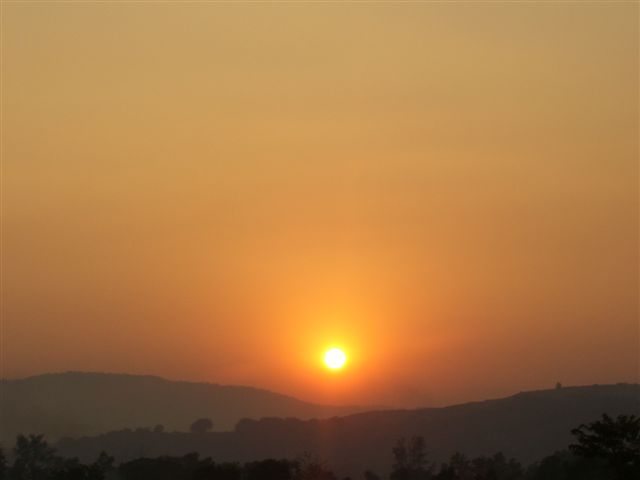 And at around 7 PM, we finally reached Srivardhan, where we had earlier planned to lodge. We took a double bed room, made a deal of Rs 700 for two days stay without fooding. The lodge is usually more cheaper in other times, but we gotto know from the house keeper that the time we went, there was this Beach Festival week being conducted across the three neighboring beaches, Harihareshwar, Srivardhan and Divyaghar. We were feeling jolly good knowing this !!

After this long tiring journey, we were totally exhausted and took bath, had dinner and decided to go for a walk to the nearby beach which is the Srivardhan beach. The beach was so crowded with many people dressed in all sorts of colorful dresses and attires; also there were many food stalls, handloom stores. The people were sitting in chairs listening to the traditional folk music being played by artists that came way long from Pune, Mumbai. Felt happy to see all those happy faces in the beach side with gentle flow of the breeze, a bright moon and the sound of the water hitting the shore. It makes such a beautiful composition which I am not able to explain by my words. We were totally refreshed by this one hour session and finally decided to go to hotel and have a good sleep after the tiring bones mercy for some bed. Also the next day, we have planned to wake up early morning so that we can visit the other beach Harihareshwar, 30 KM’s apart from our hotel. We planned to spend the whole day in that beach and the evening at Srivardhan. Minutes apart, we both fall asleep after going to the bed within no time. A lovely challenging experience we had from the morning this very day when all went wrong and against our plans, still we made it in our mind to make this trip happen. I realized Will force is a great think. What you can think, you definitely can do it provided you give your 100 % without letting your fears overcome you !

Road Trip to Harihareshwar, Divyaghar and Srivardhan Beaches , the coastal areas of Maharashtra !! was last modified: April 19th, 2020 by ignorantminds

Very soon the faint evening glow, which was prevalent in the sky, vanished. The vessel did not have any light in the upper deck area. All the lights we had, was only the cosmic glow in the sky. I could not see anything ahead. The person sitting next to me was a mere silhouette. Up above there were innumerable stars and glowing planets travelling with us and below there was infinite quantum of water through which we were moving.