I have always been fascinated by lofty mountains & rivers. But no sooner than this summer, my fascination rose to the level of determination to visit “GOMUKH” – the so called origin of river Ganga, A documentary on ganga was aired on national geo provided further insight into the mythological aspect of it. Also one prominent reason was that I hail from Patna which is located at the banks of river Ganga.

My exams were over and I just wanted to take a break before I marathon for my next academic year of Law. I planned to go and rediscover and witness the origin of Ganga for my own spiritual and asthetic redefinition. I discussed my vacation plans with one of my close friend Anuj and he enthusiastically nodded for the tour.
After a preliminary research about the places that we intended to visit, distance between them and what to carry along, We officially kicked off our trip. 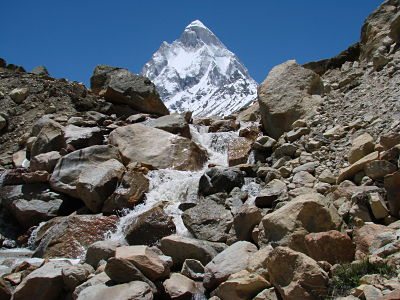 Surreal sight of snow behind the rugged rocky trail 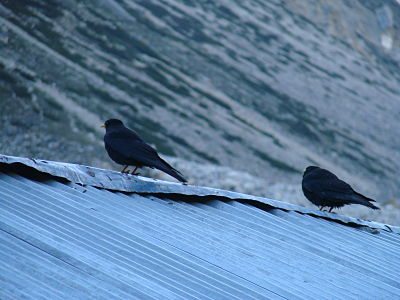 It was scorching hot afternoon of June 13. The temperature of Delhi was soaring everyday higher. We reached ISBT and inquired about the bus services to Rishikesh. We did not find any AC bus as they were already packed. We finally boarded the roadways bus as the evening set in, day becomes bearable. Finally bus left for Rishikesh and we reached at around 3’ o’clock. We decided to continue further towards Uttarkashi without any break. We took another bus for Uttarkashi and it started climbing on the serpentine road of hills. At the dawn, the sunlight from behind the mountain scattered at horizon, turning the sky into grey for a while and then scarlet.

As we climbed on, beauty of mountains took new bewitching fold. Every mountain that we crossed, unfolds a new awe-inspiring view. We stopped at Chamba just for a short break to get some tea and snacks. We finally arrived Uttakashi at/around 11 am. 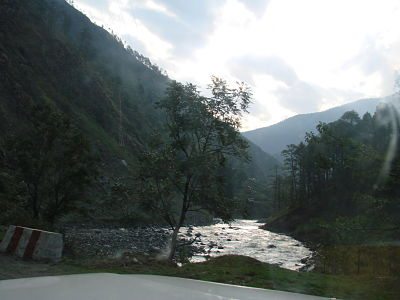 River cutting through the mountains

Uttarkashi is surrounded by tall mountains and dense forest. It is a serene town spread on both sides of river Bagirathi. Uttarkashi is often equaled with Kashi (Varanasi) in divinity. There is an old temple of Lord Shiva known as “Kashi Vishwanath” which is one of the most important places to visit. Uttarkashi is also religious place from the point that it is gateway to Gangotri and eventually Gomukh.

Visitors of Gomukh have to take permit from the forest department at Uttarkashi as Gangotri onwards is a national park. They allow 150 persons each day and only two days of stay in national park is allowed (only on papers). 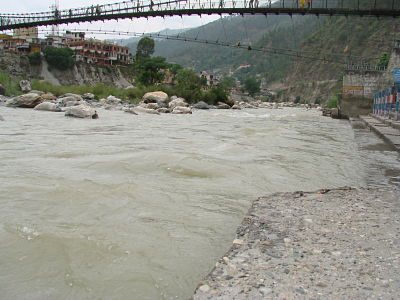 Muddy waters of the river 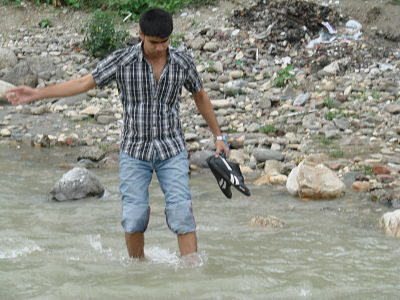 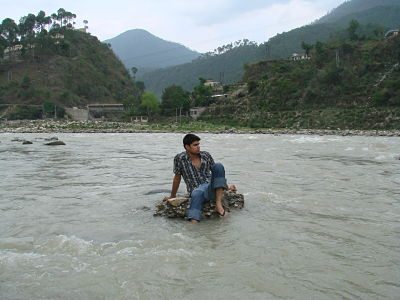 Little island in the middle of the river

We were totally exhausted by this time hence booked a room in a hotel at Uttarkashi. When we got to the balcony, we could see Bhagirathi flowing at its full swing. It was so exciting to see the powerful current and hear the roaring sound of the river. We could not resist from taking a dip and walked towards it. The noise of the flow was getting louder as we were approaching towards it. A sense of inspiration, fear and respect was constantly coming to my mind. It was in fact a blend of emotions that stirred up a feeling in me to just take a symbolic bath and not to trifle with her. 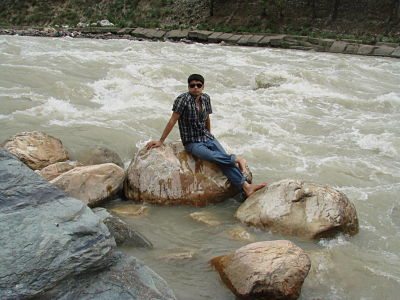 Next morning, we started for Gangotri. The way to Gangotri unfolds immaculate beauty of Himalaya. Spotless sky with clean air was just a paradise feeling. We were following river Bhagirathi which was flowing down between mountains. At every turn a fresh breathtaking splendor of majestic Himalayan view was stimulating. As we moved ahead, I found mountains covered with pine and other coniferous trees. We reached Harsil which is at 2,620 mts above the sea level. We stopped at Ganga nani for some refreshment. There was a hot water spring over there. I sat on a stone perch and leaned against another rock. Down the mountain, river Bhagirathi was roaring and in front of me was a seren and calm chain of snow capped mountains.

Finally, we reached Gangotri. It took us four hrs to reach there from Uttarkashi. It is almost 100 km from Uttarkashi. It is a vibrant town at the altitude of 3140 mts. Set a midst green woods, high mountains and numerous water springs. According to sagas, Maa Ganga ascended on earth at this place. The narrow street of Gangotri was thronged with cosmopolitan crowd. Four to five ghats are made to take Holy bath. Ghats are chained as Bhagirathi is quite strong to flow away anyone. We had our lunch, took stick from local shop and set out for much awaited journey. 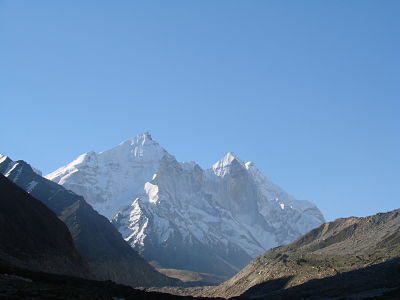 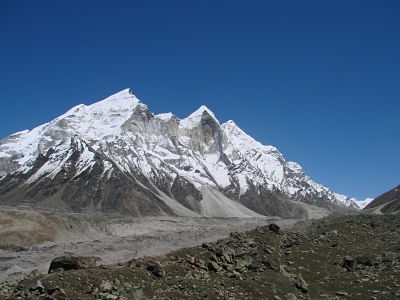 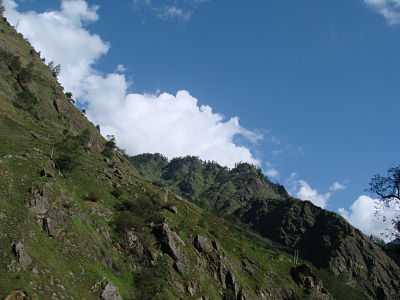 Green grass is visible only at times 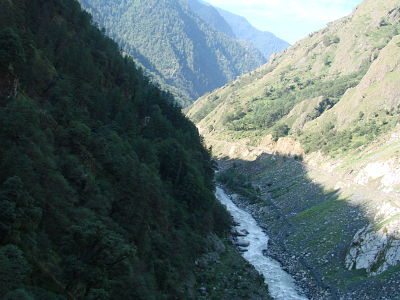 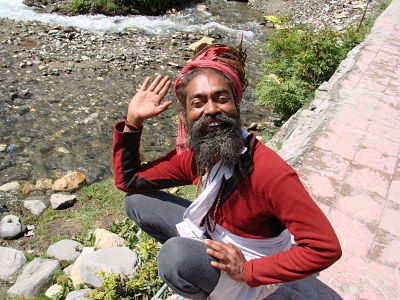 A sadhu enjoying his place next to the river

The trek of 19 kms had begun now. We crossed the check post where we confirmed the permission receipt to visit Gangotri national park. After few kilometers the mystic beauty of Himalayas unfolded. We had entered into a secret dream of an unknown world amidst numerous trees, shrubs, and water springs. It was refreshing with the fragrance of nameless wild flowers and exotic herbs. Sings of nature accompanied by chirping birds – It was an exclusive experience because Gomukh trek never sees the multitude of visitors.
The misty winds hanging between snooty mountains gave me impression of “Havankund”.
The path was quite uneven and threw challenges at every few hundred meters to cross it. At some places, it was so narrow that only one person could pass at a time. We reached Chirbasa which is 9 kms away from Gangotri. By that time, we were quite exhausted and we managed to get Maggie and tea for 100 bucks. It was so delicious & yummy that even the tastiest food in this world could not outrun that. 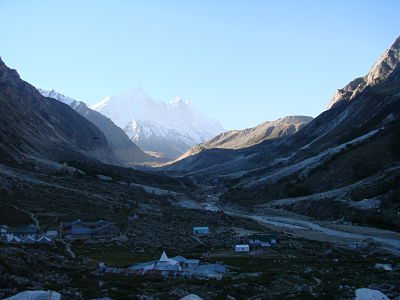 Next to these mountains, everything else seems dwarfed

After mustering courage to face rough topography, we moved ahead. Finally, we reached Bhojwasa at 7 PM. It is 5 Kms from Gomukh. In 14 KM’s trek there is no halt except Bhojwasa. It is located in a small valley of Himalaya on the sideline of Bhagirathi.
In front of our ashram where we stayed, I saw Bhagirathi peak firmly erected with glory. In moonlight, now covered mountains turns golden, don’t know why but it was a poetic beauty. I wake up at dawn to enjoy the morning freshness of mountains and set out for Gomukh after the sunlight was spread over mountains. 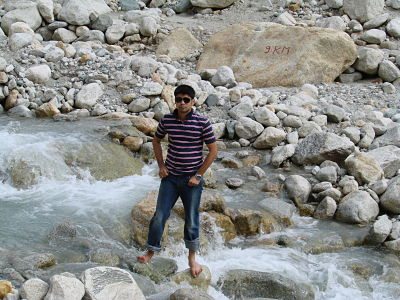 It is blessing to have a river flowing alongside 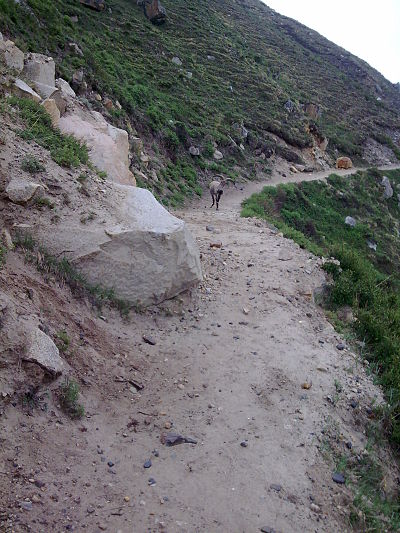 A distant view of Gomukh is something like a heap of ice slabs which has taken a shape of a small mountain and at base a narrow tunnel from where water is oozing out. I was pulsating with excitement and thrill as I neared to Gomukh. I had mixed feeling of reverence, wonder, fear and excitement. If I zero down my feelings in one word – I was awe-struck. It was a mystical experience. The magical surrounding put me in a philosophical trance. It felt esoteric form of spirituality which was not patronized by any religious faith. It is the origin of most reverend and majestic river of this world which has commanded respect from ages. I bow down in front of Gomukh and took a dip into the icy river. I never ever felt so fresh, so pious $ so ecclesiastic from within. Now only I could realize why it is “Maa Ganga”, why it is sacred and worshiped all over India. 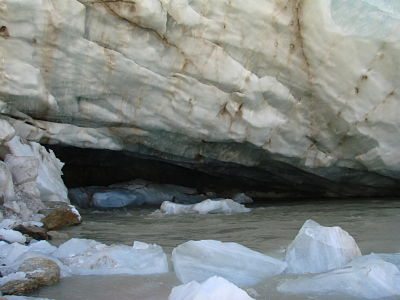 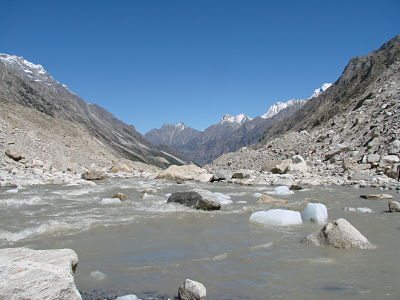 The river finding its way down 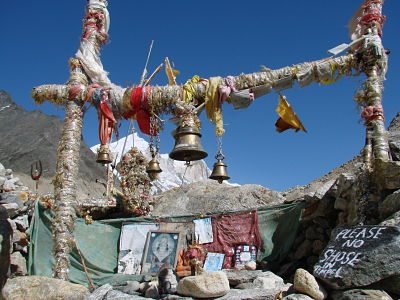 Nothing can be more soothing than the temple bells

We did not stop there and decided to climb up the mountains to reach Tapovan which is 5 kms from Gomukh. It’s a vertical trek of 5 kms so you can imagine what. It squeezed out the total strength. Tapovan is a hilltop area best for camping as a maverick view of many peak can be seen from here. 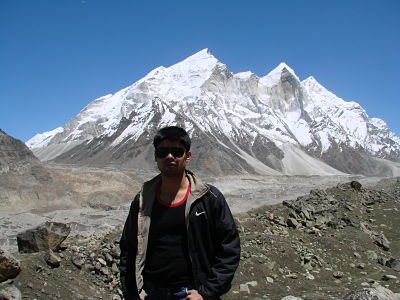 etched in my mind forever

While retreating, I turned back to behold the beauty in my memories.

Like other bloggers/authors on this forum, I am also a big travel freak and love travelling a lot. I hail from Patna (Bihar) but staying in Delhi for a decade now. Working as a business analyst with Hewitt Associates & married to Vidya. I am more of a happy go lucky person who enjoys every bit of life without giving much aid to lillte vexations.